Accessibility links
After A Year Of Bombing ISIS, U.S. Campaign Shows Just Limited Gains : Parallels Airstrikes have helped push back the Islamic State in some places, but the group has gained in other areas. Pentagon officials say the U.S. operation may need another two years or more to succeed. 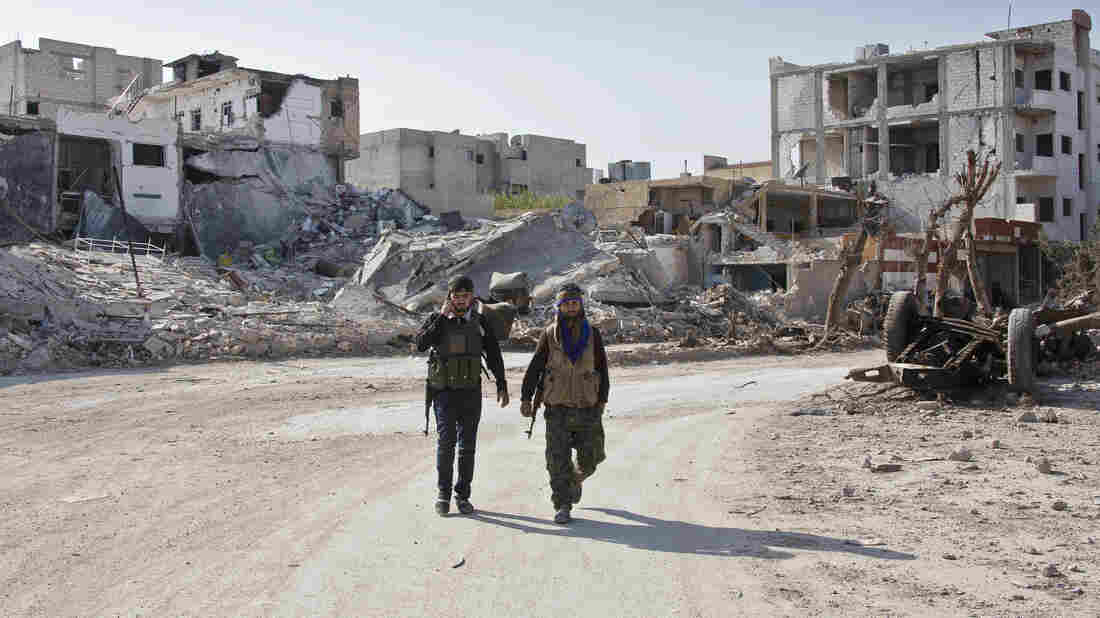 Kurdish rebels in northern Syria walk near the devastated town of Kobani last November. The U.S. bombing campaign helped the Kurds push back the Islamic State from the area. But overall, the U.S. operation against ISIS in Iraq and Syria has shown only limited gains in the past year. Jake Simkin/AP hide caption 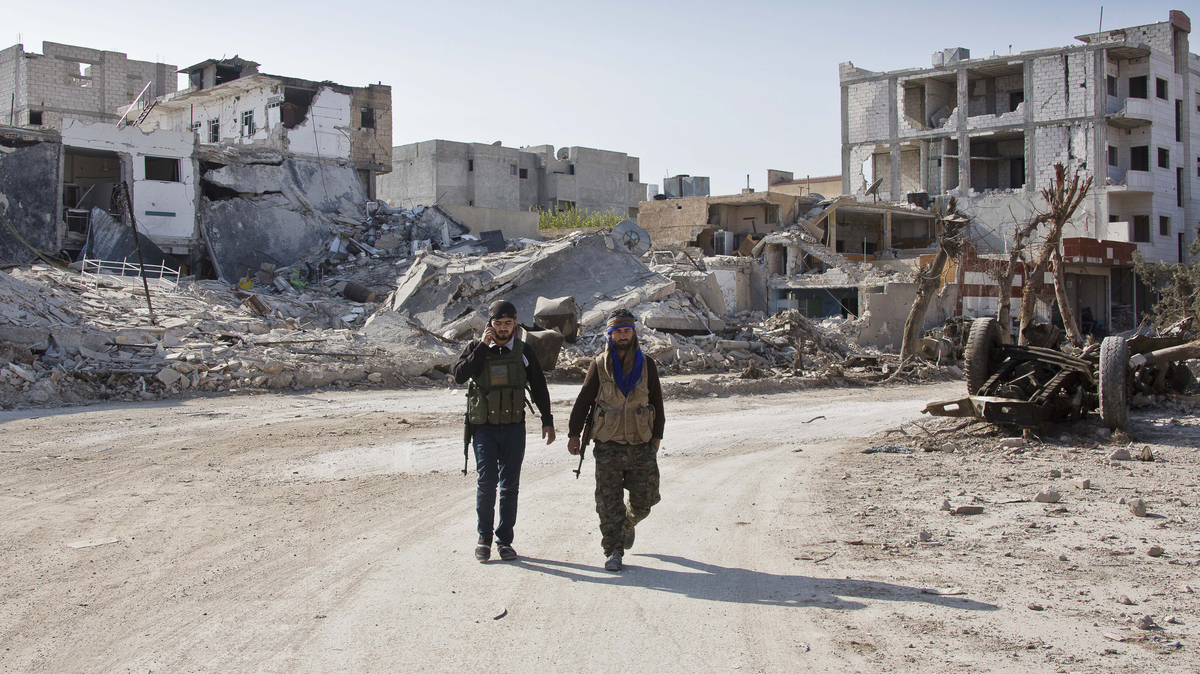 Kurdish rebels in northern Syria walk near the devastated town of Kobani last November. The U.S. bombing campaign helped the Kurds push back the Islamic State from the area. But overall, the U.S. operation against ISIS in Iraq and Syria has shown only limited gains in the past year.

When President Obama announced a year ago that he was authorizing new military operations in Iraq, he drew sharp limits on that action.

It would only comprise, he said, "targeted airstrikes to protect our American personnel, and a humanitarian effort to help save thousands of Iraqi civilians who are trapped on a mountain without food and water and facing almost certain death."

Airstrikes began the next day to rescue the Yazidi people who were trapped on Iraq's Mount Sinjar.

That air campaign has grown much wider over the past year. Pentagon officials say some 6,000 more bombing runs have been flown over both Iraq and Syria against the self-declared Islamic State, also known as ISIS or ISIL.

Late last month at an air base in the oven-hot Jordanian desert, Defense Secretary Ash Carter delivered a pep talk to a group of U.S. airmen and women who fly bombing raids against the Islamic State.

"This enemy has to be defeated," the Pentagon's top civilian told them. "They will be, because you know the barbarians are always defeated by civilization and the few by the many, the evil by the good — so I don't have any doubt that we will win."

Map Of Islamic State Presence In Iraq And Syria Other Pentagon officials say victory is at least two years away.

Still, last week, the top American commander in the war zone said the airstrikes have hurt the Islamic State's ability to mount big attacks and operate in the open.

And those bombing runs have been chosen, Marine Brig. Gen. Kevin Killea added, with great caution.

"I will emphasize that every target is carefully considered by coalition air forces," said Killea, "to address and minimize the possibility of collateral damage and civilian casualties."

Critics Of A Limited Campaign

Critics say there's been an excess of caution in the bombing campaign.

"The air attacks to date have been what can only be called anemic," says David Deptula, a retired Air Force lieutenant general.

Deptula, who directed the air campaigns in the first Gulf War and the invasion of Afghanistan, says it is not possible to defeat the Islamic State by flying what's been an average of little more than a dozen airstrikes a day.

"The administration's incomplete strategy places U.S. commanders in an untenable situation," he says. "It's not unlike the failed strategy that was employed in Vietnam."

The current air campaign drew fire as well at a hearing last month on Capitol Hill.

"Our means and our current level of effort are not aligned with our ends," said Senate Armed Services Committee chairman John McCain, the Arizona Republican who himself flew combat missions in Vietnam. "That suggests we are not winning, and when you're not winning in war, you are losing."

When Obama first announced the airstrikes a year ago, he promised that "as commander in chief, I will not allow the United States to be fighting another war in Iraq."

But just a month later, the president told the nation he was expanding the anti-Islamic State campaign. In a prime-time address on the eve of the 13th anniversary of the Sept. 11 attacks, Obama said, "I want to speak to you about what the United States will do with our friends and allies to degrade and ultimately destroy the terrorist group known as ISIL."

George Washington University's Stephen Biddle, who advised Gen. David Petraeus during the first Iraq war, says the U.S. has adopted "a Goldilocks strategy" by trying not to do too much or too little against an enemy it sees only as a limited threat.

"They want to try and do something militarily that's limited," says Biddle, "and that's not enough to do the job; failure in doing the job produces these pressures to escalate, but they don't want to escalate a lot because they don't think it's worth it, so they escalate a little. That doesn't do it either — that yields more pressure. This is a recipe for mission creep."

Indeed, during his swing through the Middle East last month, Defense Secretary Carter told U.S. troops in Iraq that operations there could expand if the effort to retrain Iraqi troops is more successful.

"It's possible that we'll need to do more and have the opportunity in the sense to do more when they get more proficient," Carter said, adding, "and obviously we're hoping that they do."

But Iraqi troops were routed in May when Islamic State forces seized the provincial capital of Ramadi, west of Baghdad.

After that setback, Carter was scathing during an interview on CNN.

"What apparently happened," he declared, "was that the Iraqi forces just showed no will to fight."

Getting those Iraqi forces to fight is key to the U.S. strategy, since Obama insists there will be no U.S. forces doing any ground fighting there.

"I see no reason to expect that we can motivate that army to actually fight effectively against the enemy," says Bacevich, "and I think that's really the key defect of this entire strategy."

Nowhere has this been more apparent than in Syria, where the U.S. has tried to recruit and train forces solely to fight the Islamic State.

Last month, Carter admitted to Congress that effort has not gone well.

"We are currently training about 60 fighters," Carter told the Senate Armed Services Committee. "This number is much smaller than we'd hoped for at this point."

Since then, some of those U.S.-trained fighters have been captured or killed; still others have fled the battlefield. But Carter insists that recruiting effort will continue — as will the air war now entering its second year.