Accessibility links
Is Afghanistan Backsliding? : Parallels U.S. combat forces left last year and there have been a number of troubling signs this year. They include a rise in deadly attacks and renewed friction between Afghanistan and Pakistan. 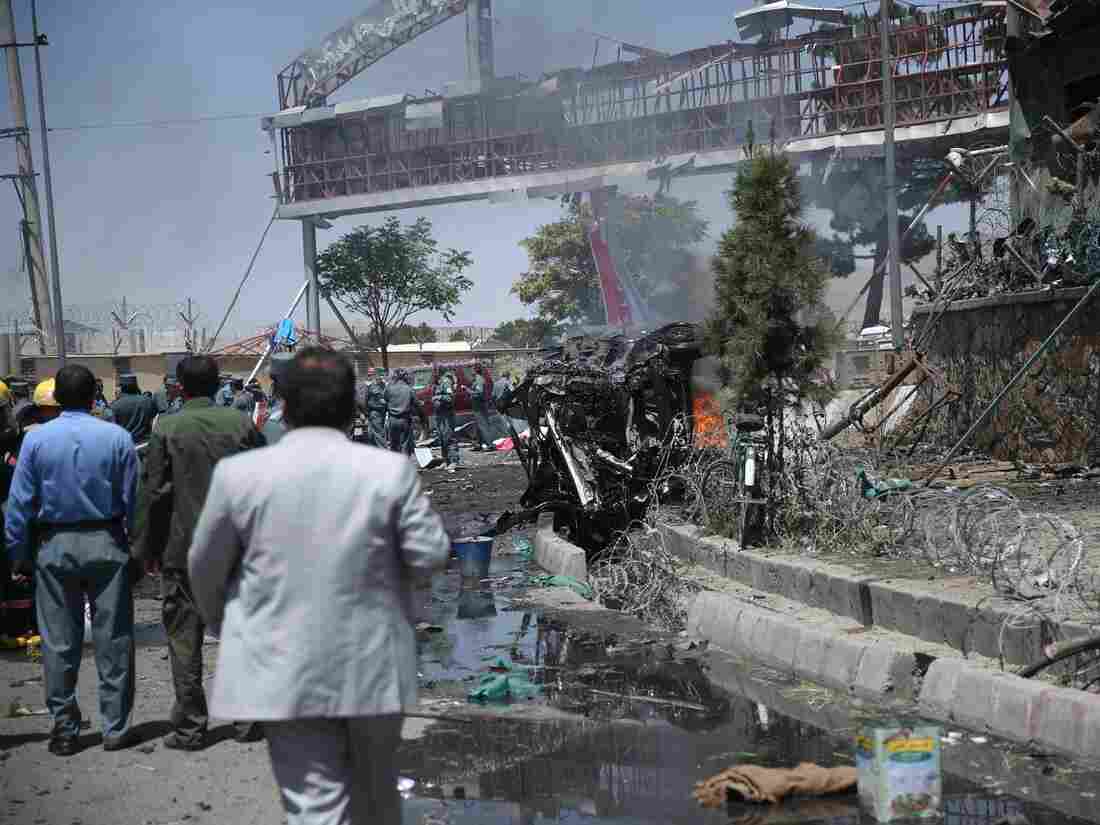 Afghan security forces inspect a suicide bombing attack on Aug. 10 near the main gate of Kabul's international airport. It was one of a series of recent attacks in the Afghan capital that have left at least 50 dead. Violence in Afghanistan has increased since U.S. combat troops pulled out last year. Massoud Hossaini/AP hide caption 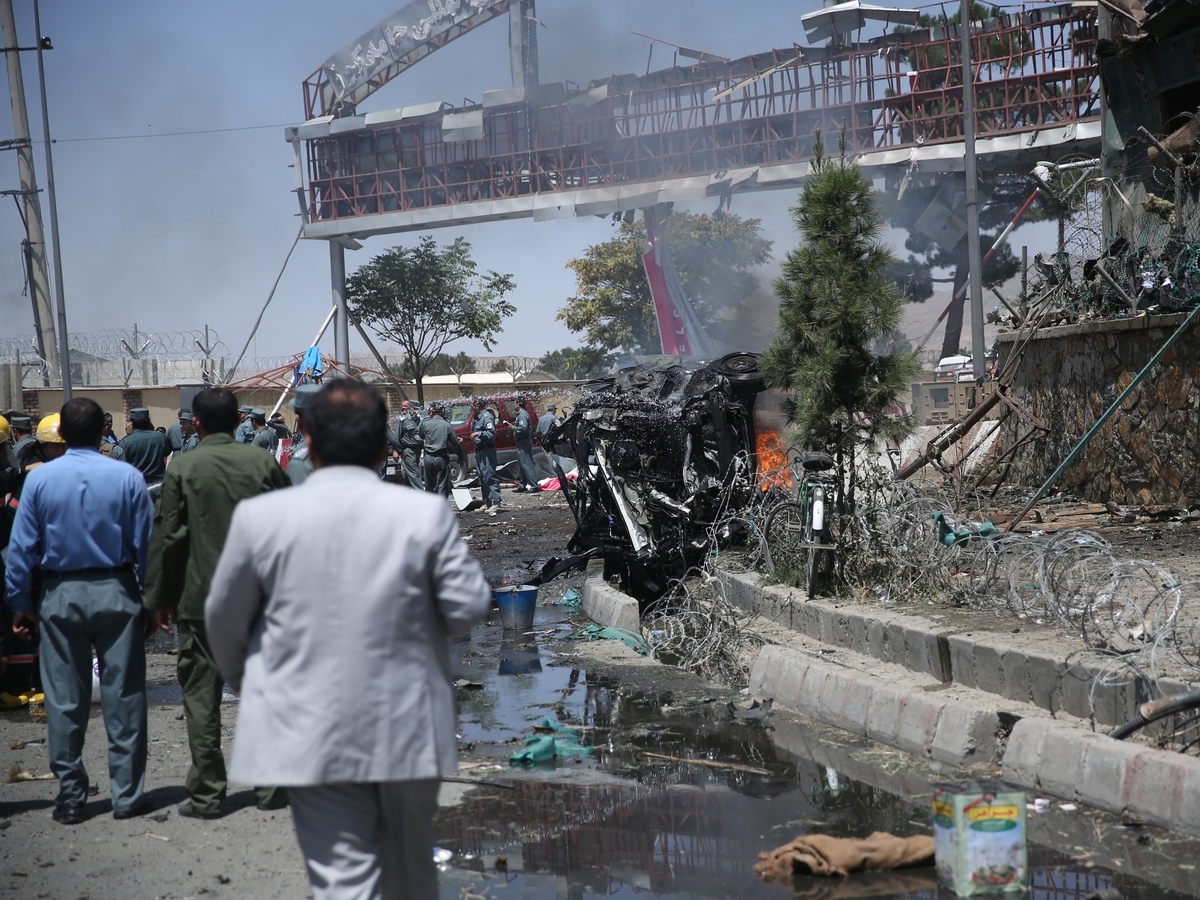 Afghan security forces inspect a suicide bombing attack on Aug. 10 near the main gate of Kabul's international airport. It was one of a series of recent attacks in the Afghan capital that have left at least 50 dead. Violence in Afghanistan has increased since U.S. combat troops pulled out last year.

Amid the horrors of war in Syria, Yemen and Iraq, it's become easy to overlook Afghanistan. Remember Afghanistan? Back in the mid-2000s, it was known as the "forgotten war," eclipsed by the bloodshed in Iraq. Now it's overshadowed all over again. But there's plenty of reason to pay attention.

Since taking office 10 months ago, Afghan President Ashraf Ghani has made a concerted and politically risky effort to improve his country's fraught relations with neighboring Pakistan, where the Taliban have long enjoyed safe haven. The two countries' relations, which deteriorated over the years, are key to the region's stability.

Ghani visited Pakistan soon after he became president and canceled an arms deal with India that his predecessor, Hamid Karzai, had requested. Perhaps most troubling to his opponents, Ghani also supported a memorandum of understanding for intelligence sharing with Pakistan so the two countries could fight terrorism.

Ghani faced criticism and opposition at home. But unlike Karzai, who rarely missed an opportunity to lash out at Pakistan, he has favored a conciliatory tone.

"We will not permit the past to destroy the future," he said during his Islamabad visit last year.

The problem is the present. Starting Aug. 7, a series of back-to-back bomb and suicide attacks in and around Kabul left hundreds wounded and more than 50 dead. And Ghani finally reached his limit.

At an Aug. 10 press conference and on Twitter, he directly blamed Pakistan for the carnage.

"We hoped for peace, but war is declared against us from Pak territory," he tweeted. "This in fact puts into a display a clear hostility against a neighbor." He called the violence "a turning point for Afghanistan."

"It's really, if anything, a turning-back point," warns Scott Smith, director of the Afghanistan and Central Asia program at the U.S. Institute of Peace in Washington. He says recent events could jeopardize the progress of the past 10 months.

The past week's attacks, some of which were claimed by the Taliban, came in the wake of a late-July revelation that Taliban leader Mullah Omar is not only dead, but has been gone from this world for a full two years. The bombings may be a signal from a disarrayed movement that its fighting capacity remains undiminished. 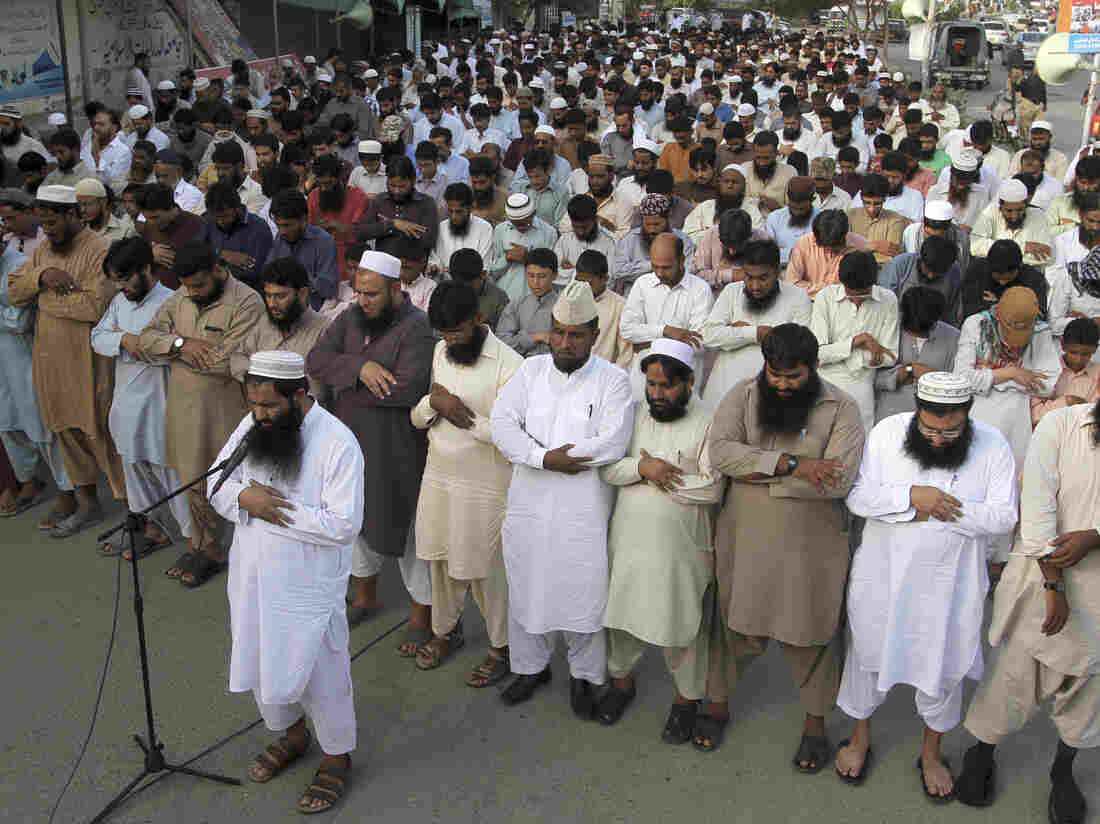 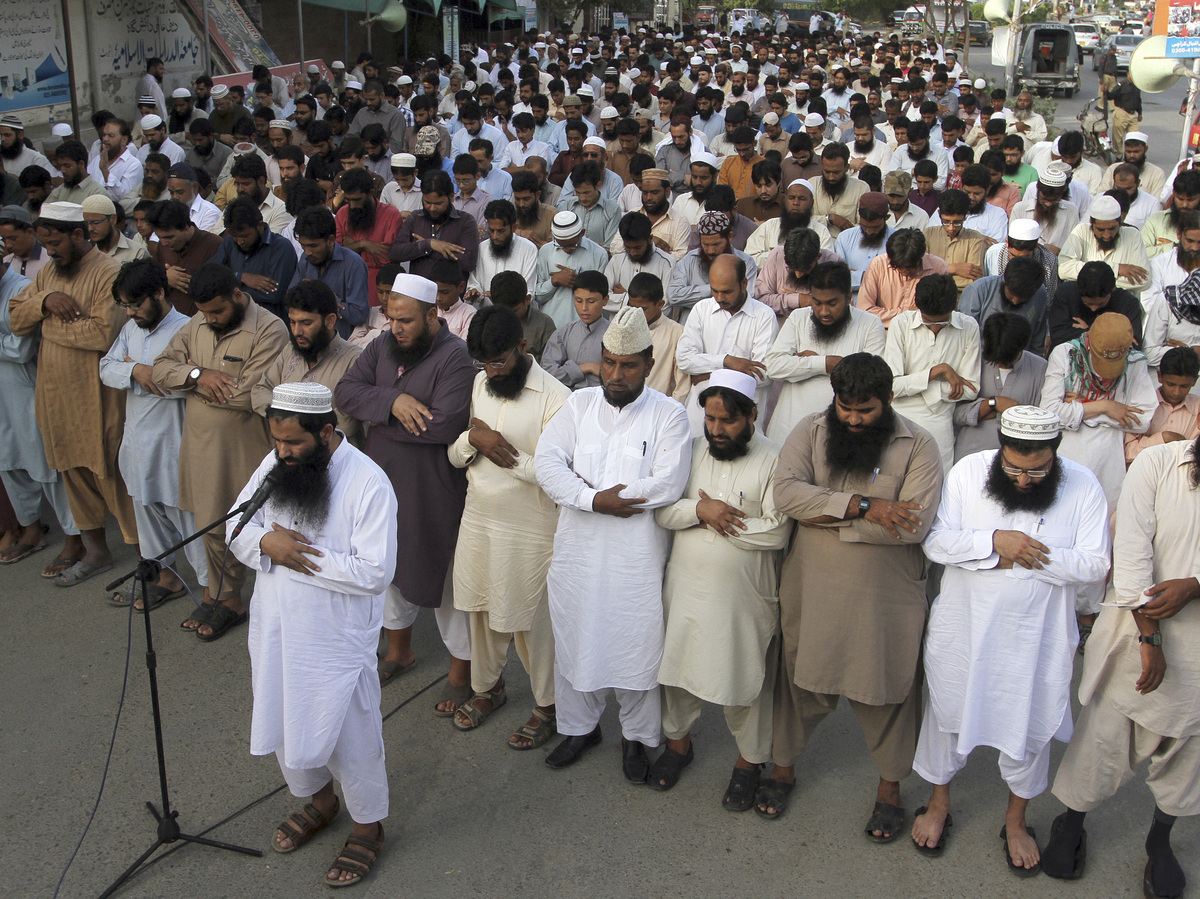 Supporters of the Pakistani group Jamaat-ud-Dawa, declared a terrorist organization by the United Nations, offer funeral prayers in Karachi, Pakistan, after the death of Taliban leader Mullah Omar was announced recently.

Or this could be violent posturing in hopes of securing a powerful seat at a future negotiating table. After Mullah Omar's death was confirmed, hopes had risen for continuing peace talks, but those talks are scuttled for now.

Mullah Akhtar Mansour, Mullah Omar's successor, had seemed to favor the talks. He authorized a first round of Pakistan-brokered talks between Taliban and Afghan representatives and U.S. and Chinese observers, which took place on July 7. But he pulled the plug on the next round, scheduled for July 31. The talks are now postponed indefinitely.

Mansour is not a unifying figure in the way Omar was and lacks universal Taliban support.

But al-Qaida leader Ayman al-Zawahiri was reported to have pledged his allegiance to Mansour on Thursday, a reaffirmation of old ties between two groups that now share a common rival in the self-proclaimed Islamic State, which is slowly making inroads into Afghanistan and is trying to encourage defections and exploit Taliban and al-Qaida weaknesses.

Stretched To The Limit

Meanwhile, this continues to be a year of heavy violence in Afghanistan, with both civilians and Afghan forces suffering unprecedented casualties.

In the first half of 2015, the number of civilians injured or killed reached 4,921, according to the U.N. Assistance Mission in Afghanistan.

The U.S. combat mission officially ended last Dec. 31. The U.S. still has 9,800 troops in Afghanistan and is spending nearly $60 billion this year on war-related costs, but Americans are serving only in advisory and training roles. Air support and surveillance capabilities support have ended. Most NATO forces have left the country.

Afghan forces are now responsible for the country's security, and they've endured heavy losses so far this year. 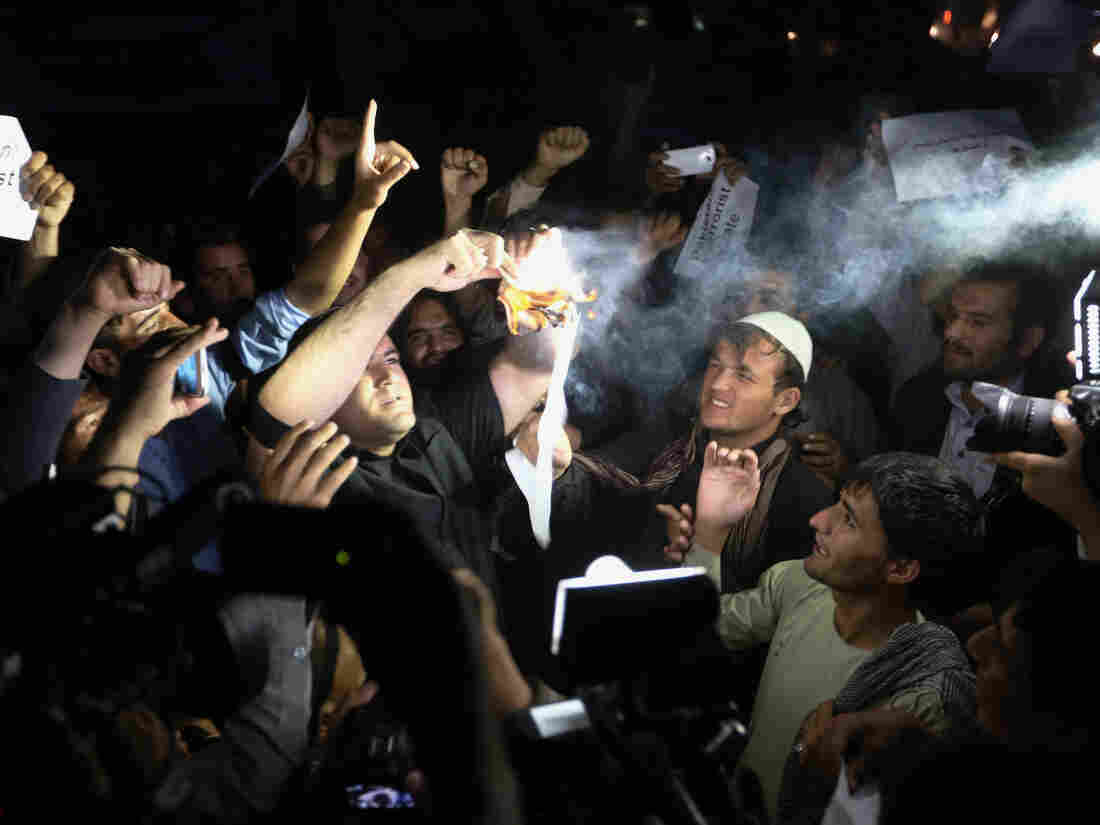 In Kabul, Afghans burned Pakistani currency notes during a vigil for victims of a series of deadly attacks in and around the capital in early August. The Taliban claimed responsibility for some of the attacks. Rahmat Gul/AP hide caption 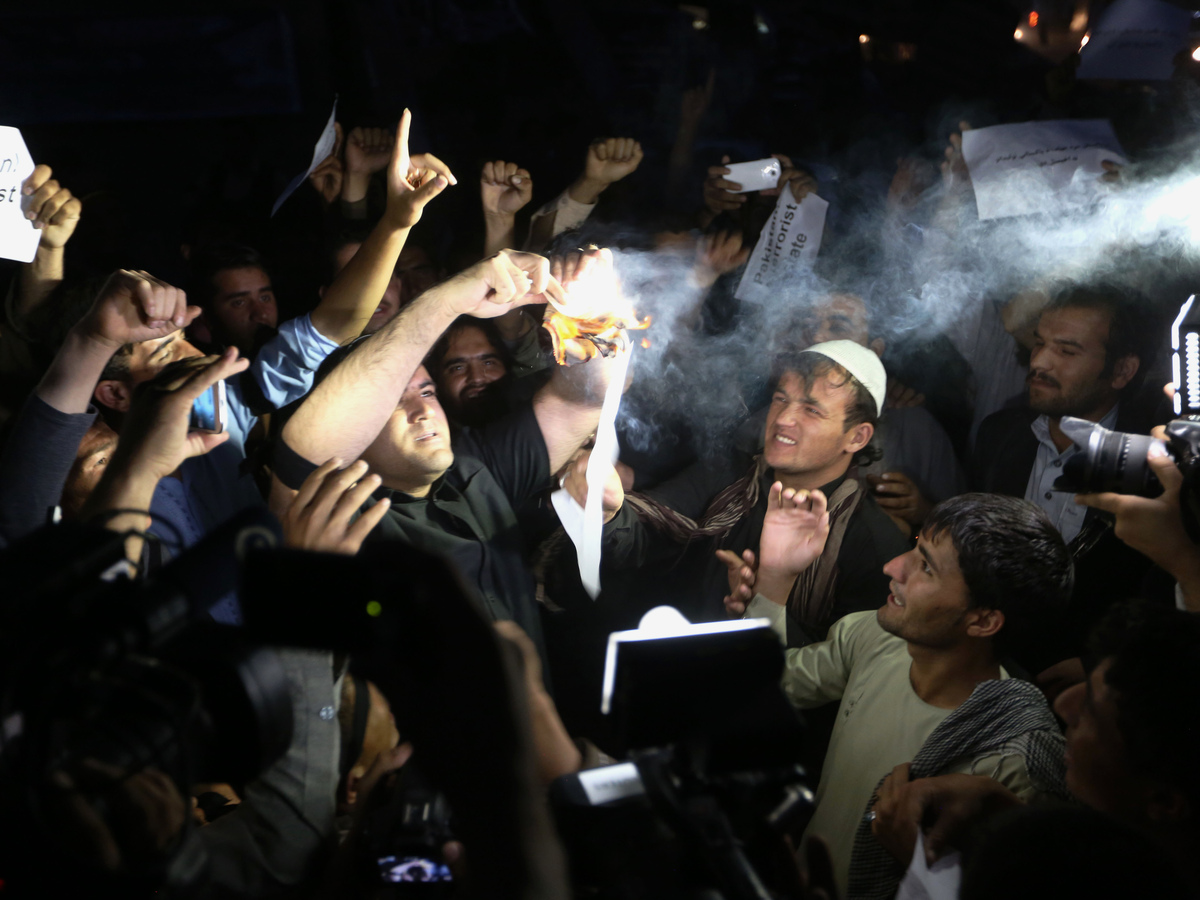 In Kabul, Afghans burned Pakistani currency notes during a vigil for victims of a series of deadly attacks in and around the capital in early August. The Taliban claimed responsibility for some of the attacks.

"It's been a very difficult fighting season," says the USIP's Smith. More than 4,000 Afghan soldiers and police were killed and nearly 8,000 wounded in the first half of the year, 50 percent more than last year.

"The army," says Smith, "is stretched to its limit."

The nature of the enemy is changing, too, he says, with the arrival in Afghanistan of militants from other parts of the world.

This is "something not envisioned in the planning for the security transition," Smith's USIP colleagues Stephen Hadley and Andrew Wilder wrote in the Washington Post.

During a recent visit to the region, "Perhaps the most troubling thing we learned," they wrote, "was that Afghanistan is once again becoming a haven for transnational terrorist groups, including the brutal Islamic State."

It's a discomfiting reminder of what happened in Afghanistan in the 1990s, when al-Qaida gained its foothold there and the country became increasingly isolated under Taliban rule.

Despite the turbulence of recent weeks, the door to Afghanistan-Pakistan peace isn't shut. Both countries are keeping lines of communication open, and on Thursday, Ghani dispatched a delegation including his foreign minister, intelligence director and acting defense minister to Islamabad.

Pakistan would like peace talks to resume. "Everyone realizes an unstable Afghanistan is not in their interests anymore," says Smith.

But it's impossible to predict how all this will play out. If the Taliban splinters, writes Michael Semple, a former U.N. official who's worked in both Pakistan and Afghanistan, "ultimately the Afghan government, with continuing international support, should be far more confident of ultimately prevailing over a fragmented insurgency than in a fight against a unified Taliban movement."

The key words here: "with continuing international support." That means not forgetting Afghanistan, as the world largely did in the 1990s. We all know what happened next.