Accessibility links
Syrian Rockers, Fleeing War, Find Safety And New Fans In Beirut : Parallels Members of a Syrian indie rock band escaped their country's bloodshed and have become a mainstay of Beirut's music scene. "In spite of all the deaths," the band sings, "you are still alive." 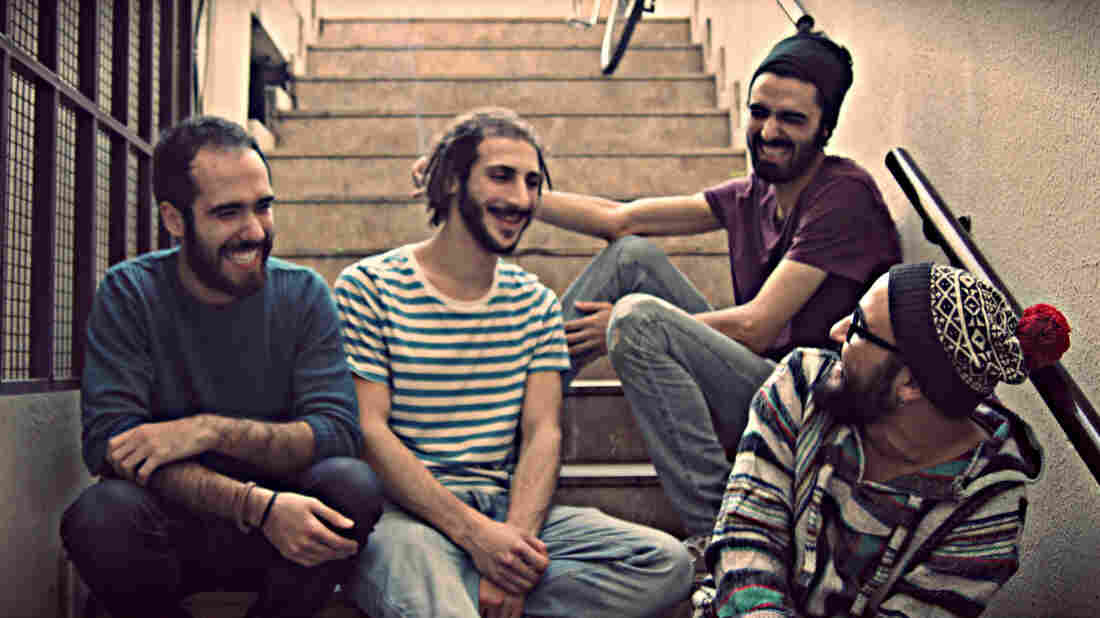 Members of the Syrian band Khebez Dawle include (from left to right) Hekmat Qassar on guitar and keyboards, lead guitarist Bashar Darwish, bassist Muhammad Bazz and lead singer Anas Maghrebi. Half the band members are now in Turkey, and are strongly considering seeking asylum in Europe. Courtesy of the artist hide caption 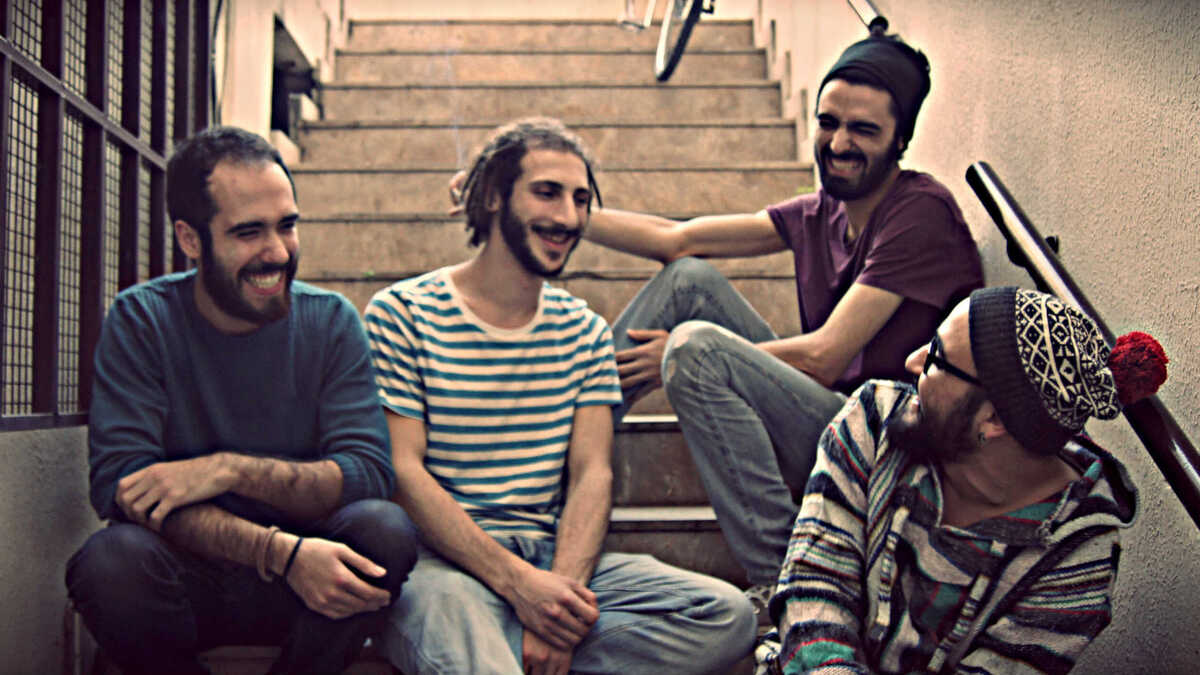 Members of the Syrian band Khebez Dawle include (from left to right) Hekmat Qassar on guitar and keyboards, lead guitarist Bashar Darwish, bassist Muhammad Bazz and lead singer Anas Maghrebi. Half the band members are now in Turkey, and are strongly considering seeking asylum in Europe.

At the launch party of his band's first album in a crowded Beirut café, singer Anas Maghrebi steps up to the microphone in front of a crowd of hip guys and women in vintage glasses, sipping icy drinks in the sultry evening.

The songs swell; the audience cheers and sings along. Maghrebi is 26 years old, tall and thin with a beard and cap, soaking up the adulation. He's not, perhaps, a typical Syrian refugee, but his journey to realize a dream of making a rock record has been fraught with hardship.

His story begins at Damascus University, where he was a student in 2010. The small-town boy listened to Pink Floyd with his friends and formed a progressive rock band that rehearsed in a basement. But police were suspicious, so they never played a gig.

"They want to know what you're trying to say in this gig," says Maghrebi. "You're gathering people and you're telling them stuff, so what kind of stuff are you telling them? 'We need to know. We're the government.' "

Then, 2011 brought the wave of uprisings known as the Arab Spring.

"When it started, it was more clear," says Maghrebi. Before patchworks of gunmen took over Syria, he says there was just the regime of President Bashar al-Assad, and the popular demonstrations against it.

The band sided with the demonstrators. The drummer, Rabia al-Ghazzi, in particular, threw himself into the protests.

"He was an activist, like, really active," says Maghrebi. Ghazzi personally organized and livestreamed demonstrations.

But one night in May 2012, he was followed and killed in Damascus. He was found in his sister's car with a bullet in his neck.

His bandmates blame pro-government militias for their friend's killing. Meanwhile, their lead guitarist, Bashar Darwish, had been drafted into the army.

"It was kind of the dream vanishing," Maghrebi says.

No Place For Music

Maghrebi wanted to stay in Syria and make music for Syrians. But civil war overwhelmed his country.

"There was no place for music as much as for weapons and for war," he says.

So, like hundreds of thousands of Syrians, Maghrebi fled across the border to Lebanon. Darwish, his guitarist, eventually deserted the army and joined him, and they formed a new band.

It's called Khebez Dawle, or State Bread, an oblique reference to the subsidized bread in Syria — and a metaphor for the foundation of a better society. Their songs, all in Arabic, tell the story of Syria. The first were written as the euphoric demonstrations began; the last, as violence descended.

"They were inspired by the turn of events," Maghrebi says. "So you see the changes that are happening."

The hopeful title track exhorts people to "Get up, build a country." One from later in the album says, "You killed me, then you blamed me because I spoke." Another speaks to the endurance of Syrians, despite the ruin of their country: "In spite of all the deaths," the band sings, "you are still alive."

Life is easier in Beirut. Arab cultural organizations gave the band grants to record its album. Lebanese artists — including prolific musician and producer Zeid Hamdan, half of an electronic band called Soapkills — welcomed an influx of Syrian musicians.

"The Syrian musicians have a much better technique," says Hamdan. Many of them have studied classical Arabic music. Khebez Dawle's Maghrebi is trained in traditional Islamic singing, a difficult discipline with dozens of scales.

Hamdan invited some Syrian musicians to play with him, and he let Khebez Dawle use his recording studio for months. Finally, the band played its first-ever concert in Beirut in May 2014.

"It was a really critical moment," says Maghrebi. "When you see your dream coming true — at the very first moments, you don't believe it."

It restored some of his faith in people and reminded him that there are those who "want peace or want music, want something beautiful."

Right now, Khebez Dawle is popular, its self-titled album just released. But the band members are still refugees, stuck illegally in a tiny country. So Maghrebi will join two of his bandmates in Turkey this week. They are strongly considering seeking asylum in Europe and building a new life — despite the dangers such migrants often face.

The album launch this month marked Khebez Dawle's last concert in Lebanon, but they leave their songs behind. After the last chords die away, one fan, a Syrian refugee named Hani Telfah, says he loves the album's lyrics.

"It talks about the street," he says, "not about the romantic world. They talk about how difficult it is to live in this situation as refugees."