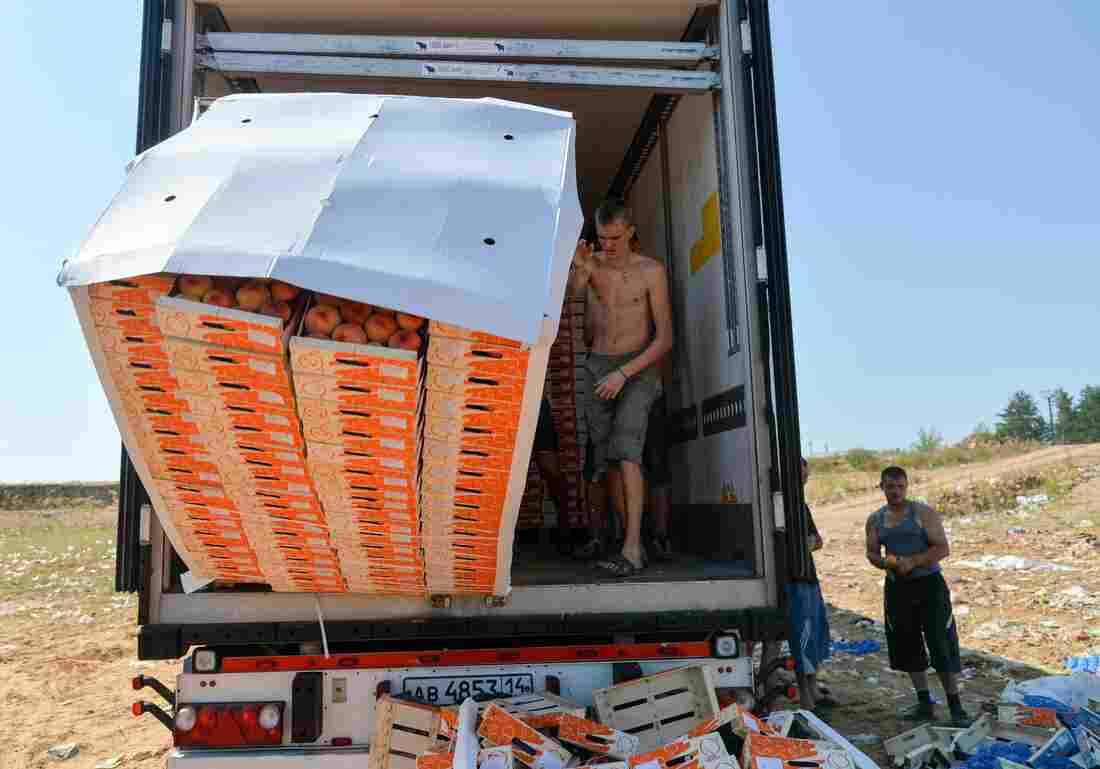 Russian workers threw contraband peaches off a truck outside the city of Novozybkov on Aug. 7. AFP/Getty Images hide caption 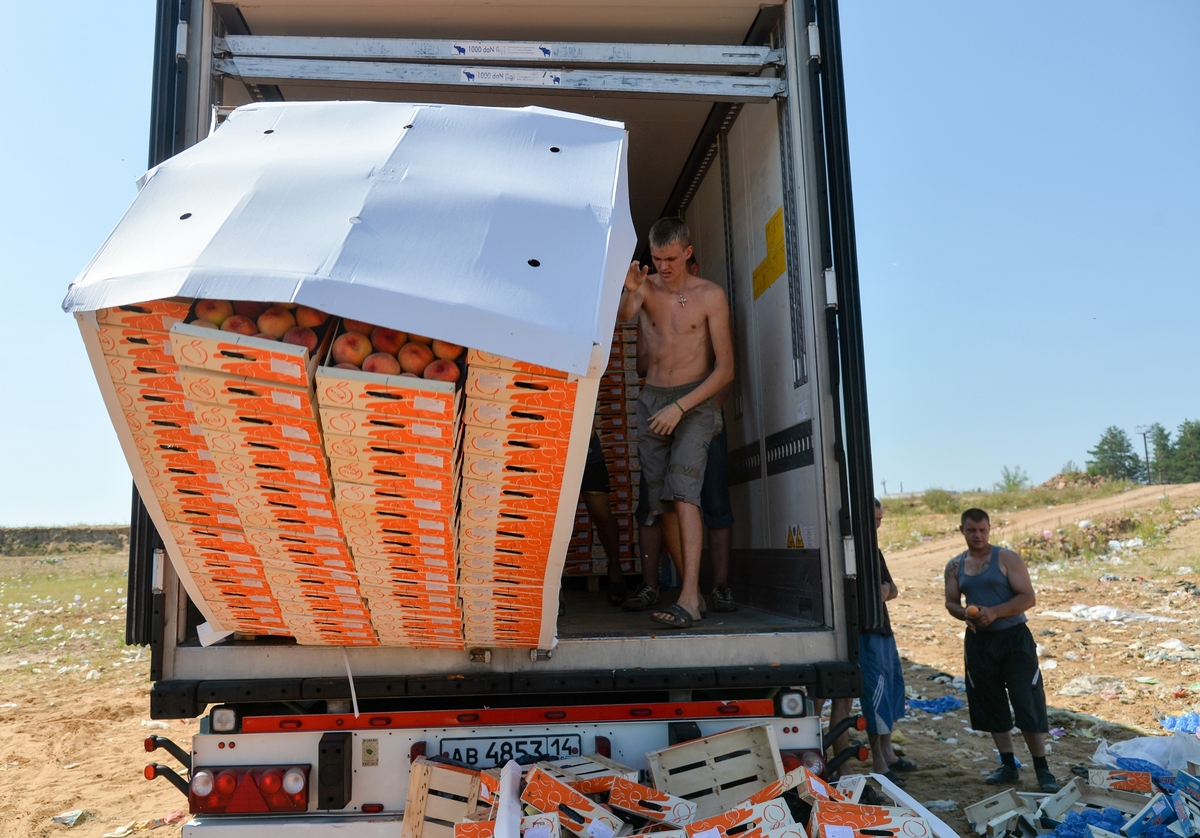 Russian workers threw contraband peaches off a truck outside the city of Novozybkov on Aug. 7.

Throughout the week, Russians have been watching scenes of destruction on the evening news.

Russian authorities are enforcing a ban on many foods from the European Union, the United States and other nations that have sanctioned Moscow for its aggression in Ukraine.

By week's end, more than 900 tons of allegedly contraband food had been marked for destruction. The annihilation highlighted just how ineffective Russia's year-long ban on Western foods has been.

Agriculture Minister Alexander Tkachyov admitted as much last month, when he asked President Putin to approve the destruction program. Tkachyov said that other countries were shipping banned products into the country under fake certificates that disguised their origin.

The agriculture minister didn't name them, but the main offenders would seem to be Russia's own allies and trading partners, Belarus and Kazakhstan, where smugglers were simply re-labeling European products as their own and shipping them to Russia.

In a country that suffered famines and food shortages during Soviet times, many people were deeply uneasy about seeing food destroyed. Several hundred thousand people signed an online petition expressing outrage and asking that the food be given to the needy.

But many others, such as Natalya Gulyayeva, accept the government's explanation that since the food was falsely labeled, there could be no guarantee that it was safe.

"Because those products were shipped into our country illegally," she says, "they might contain forbidden ingredients, so maybe it's a question of safety for our citizens."

Gulyayeva says she's been able to buy some banned items, such as cheese and meat, although it's no longer possible to find her favorite Brie.

The agriculture minister admitted later that there was another problem — namely that if the confiscated food wasn't destroyed, there would be no way to guarantee that corrupt Russian officials wouldn't resell it or consume it themselves.

For many Russians, the campaign against foreign foods reached a peak of absurdity when officials in the Russian republic of Tatarstan released a video of officials destroying frozen poultry, believed to have been illegally imported from Hungary. 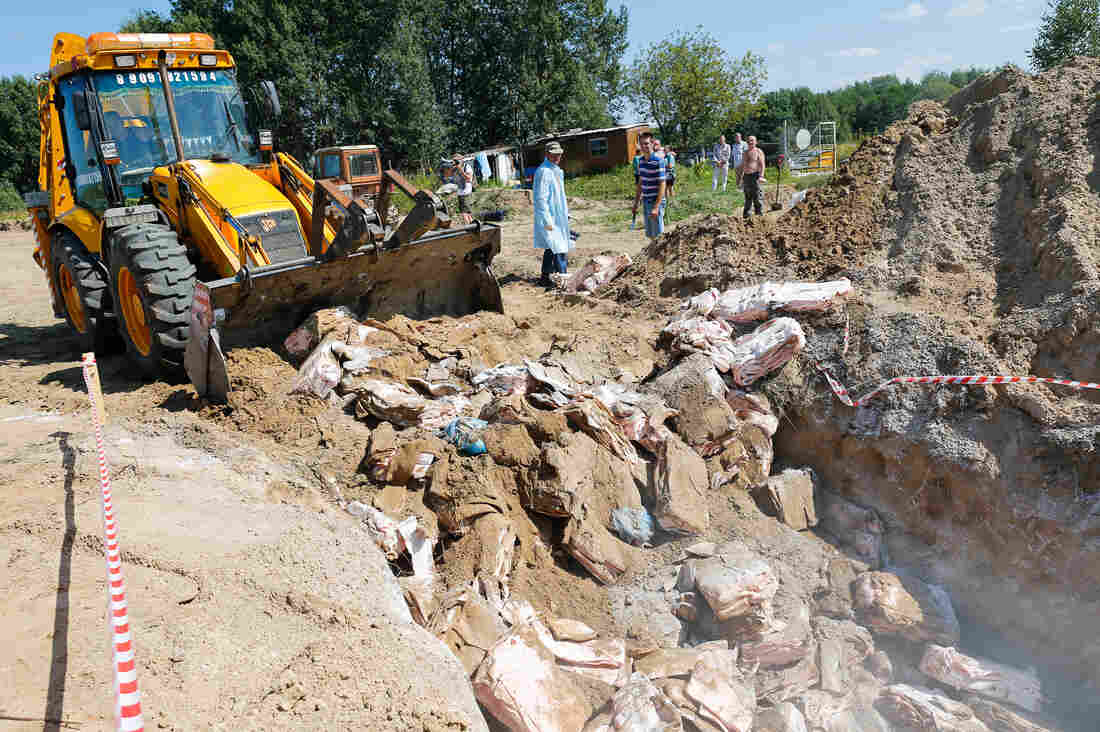 Cured pork fat, said to be illegally imported, was destroyed at a landfill in the Kaliningrad region of Russia on Aug. 11. Russia has banned certain food imports from the United States and its allies in response to sanctions. Vitaly Nevar/TASS ITAR-TASS/Landov hide caption 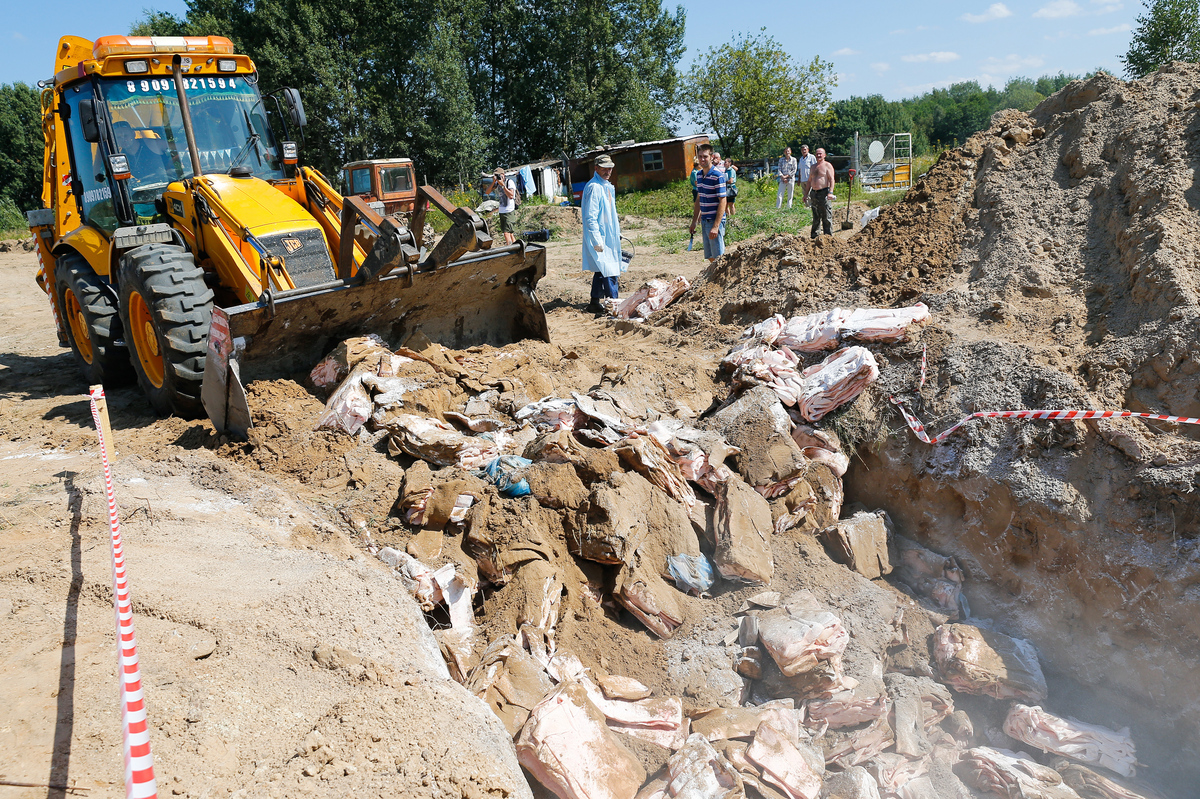 Cured pork fat, said to be illegally imported, was destroyed at a landfill in the Kaliningrad region of Russia on Aug. 11. Russia has banned certain food imports from the United States and its allies in response to sanctions.

The video showed a policewoman in a small grocery, reading out the charges against the three packaged frozen geese in the presence of witnesses.

The geese were then taken to a landfill, where they were lined up and ceremoniously run over by a bulldozer.

It turns out that a thoroughly frozen goose is more than a match for heavy equipment, because the bulldozer had to make several passes to crush the carcasses.

What's more, Russian health officials later berated the cops, saying that poultry should be incinerated rather than squashed.

Even people who weren't bothered by the destruction of food were irate that so many government resources were being used in the operation.

"I think it's nonsense," says Alexei Borisov, a 30-year-old logistics specialist. "Recently, there was a TV report that they detained a large lot of cheeses. Some people got awards for that — there was a huge operation. So they're not fighting criminals. It's not cocaine, it's not drugs, but cheese! Ordinary cheese."

But the fight is far from over.

On Tuesday, police in the Moscow region announced that they had cracked a $30 million ring that was smuggling illegal foreign rennet and using it to make bootleg cheese. They say they seized 470 tons of the stuff, and nabbed six suspects.

The crackdown will only get rougher.

On Thursday, Russia's Federal Customs Service proposed a bill that would categorize banned foreign foods as "strategically important." That could place smuggled tomatoes on roughly the same footing as radioactive materials and explosives.

In fact, it would allow officials to bring criminal charges against food smugglers, with penalties of up to seven years in prison.

In the audio of this story, as in an earlier Web version, we incorrectly say that more than 900,000 tons of contraband food had been marked for destruction. In fact, that number is 900 tons.