Accessibility links
Hunger Strike Raises Debate About Force-Feeding In Israeli Prisons : Parallels After a Palestinian prisoner's hunger strike, Israel's parliament passed a law permitting the force-feeding of prisoners to keep them alive, but doctors made it clear they wouldn't participate 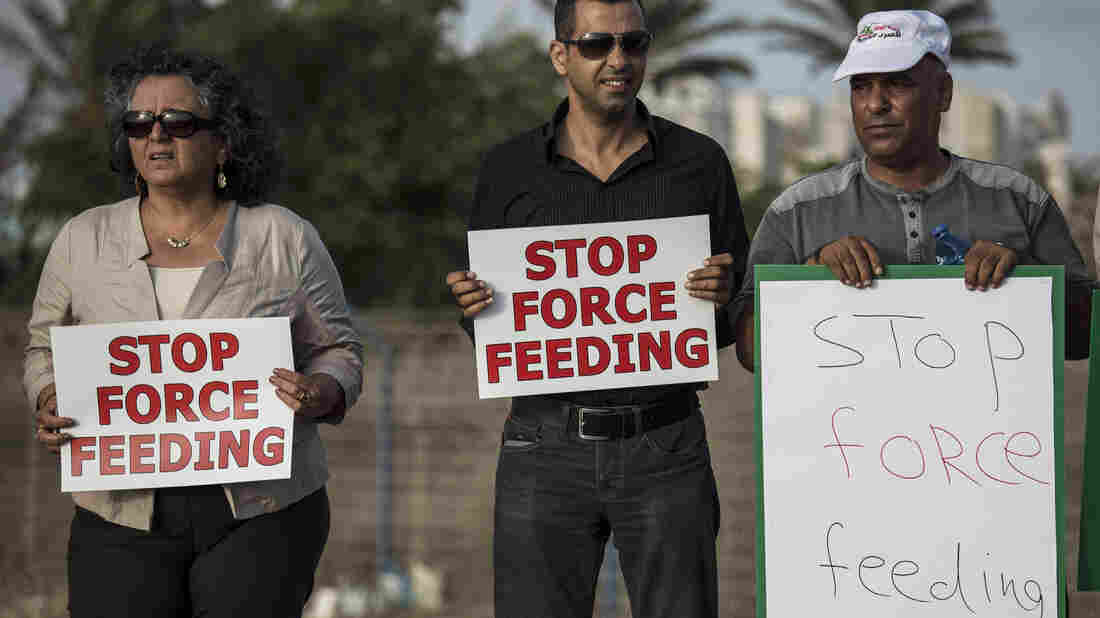 Israeli Arab supporters of Mohammad Allan hold signs during a rally in the Israeli city of Ashkelon earlier this month. Allan spent his college years as an activist, fighting for Palestinian rights as a member of the student wing of the Palestinian Islamic Jihad militant group. Tsafrir Abayov/AP hide caption 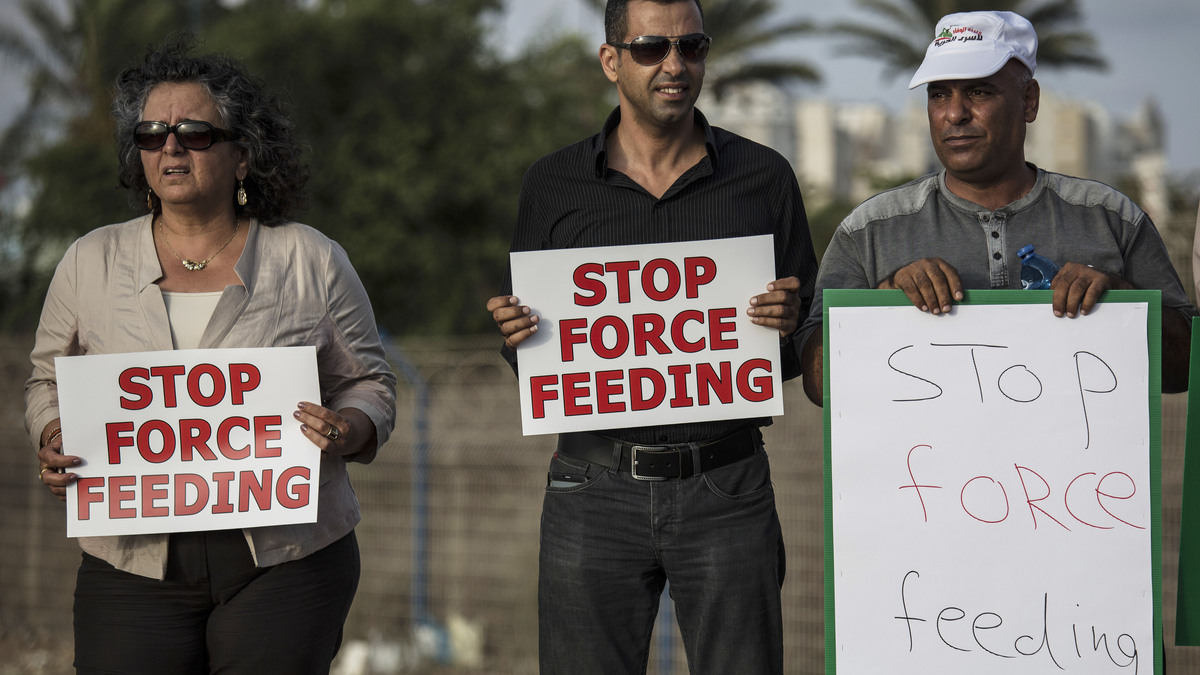 Israeli Arab supporters of Mohammad Allan hold signs during a rally in the Israeli city of Ashkelon earlier this month. Allan spent his college years as an activist, fighting for Palestinian rights as a member of the student wing of the Palestinian Islamic Jihad militant group.

When a Palestinian man in Israeli custody came close to death this week, doctors challenged an Israeli law.

Palestinian prisoner Mohammad Allan was in critical condition after he had refused food for two months, protesting his detention since last November in Israeli custody. Suspected of ties to a militant group, he was held with no charges, no lawyer and no accusations to face in court.

Six weeks into his hunger strike, Israel's parliament passed a law permitting the force-feeding of prisoners in order to keep them alive. Allan might have become a test case for the law, but doctors made it clear they would not participate, calling it unethical medical treatment.

"It's like rape," says Yoel Donshin, a retired anesthesiologist and a member of Physicians for Human Rights. "You will ask a physician to rape a patient for treatment? This is unacceptable."

Donshin doesn't believe Israeli politicians who supported the law want to save the lives of prisoners.

"They do not care for the welfare of the prisoners," he says. "They just want him not to become a symbol or martyr."

Many Palestinian prisoners in Israeli prisons have participated in hunger strikes over the decades. Ismat Mansour, for example, is a repeat hunger striker. Incarcerated for 20 years for helping kill an Israeli, Mansour, in planned actions with other prisoners, ate just salt and water for at least three weeks, four separate times.

Hunger strikes are difficult, he says.

"When I didn't eat for 28 days I felt weak, I craved food, I couldn't remember things," he says. "The only thing that keeps you going is your will and your goal."

Their aims were to improve life in Israeli custody: more chances for education, more canteen hours, more TV, more family visits. He says Israeli doctors kept watch over him and other hunger-striking prisoners, recording their blood pressure and weight daily, and giving advice.

"We knew that we were taking a risk by doing a hunger strike, and doctors would tell us if we continued we might die. But we knew they were from the prison authority, so we didn't trust them."

Mohammad Allan's situation was different. Solo, and much closer to death, Palestinian protests over his continued detention grew as his health got worse. Israeli authorities feared his death could trigger street violence. But amid the turbulent public debate, one lawmaker who had voted against allowing force-feeding said he changed his mind. Yaakov Peri also used to head Israel's internal security.

"The only solution is that he be fed," said Peri on an Israeli radio program last Wednesday. "I was against the force-feeding bill, but the alternative is an end to his life. There are times when the state of Israel has to make a decision, and if we need to force-feed him, we will have to force-feed him."

It's not breaking [the] law, because there is no law in Israel to force doctors to use a treatment they don't believe should be used.

He spoke before an Israeli high court ruling that ended the question of force-feeding Allan. The court suspended his detention until doctors could determine any long-term health consequences and Allan agreed to take nutrients.

Israel's public security minister opposed the ruling. He warned that more Palestinian prisoners will now go on extreme hunger strikes and, on his Facebook page, criticized the doctor who heads the Israel Medical Association for telling physicians to ignore the new Israeli law. (Updated 1:30 p.m., Aug. 24: On Sunday, four days after the court ruling, Israeli media reported that more than a dozen well-known Israeli academics and physicians signed a paper supporting the state's position, saying a doctor's responsibility is to save lives).

That doctor, Leonid Eidelman, says he did nothing wrong.

"It's not breaking [the] law because there is no law in Israel to force doctors to use a treatment they don't believe should be used," he said.

Under Israel's force-feeding law, a judge can allow, but not order, a doctor to participate. Israel is not the only place force-feeding is an issue. The U.S. military has repeatedly force-fed hunger strikers held at Guantanamo Bay, and American courts have upheld the practice.

In Israel, Eidelman and other physicians say they would honor a patient's wish to refuse food, but would step in to save that same patient's life if he or she were unconscious. Eidelman says that worked for Mohammad Allan, who wanted a trial or freedom — not death.

Mohammad Allan ended his hunger strike after the Israeli court ruling. The force-feeding law remains on the books, awaiting a future case and a future debate with Israel's doctors.