Accessibility links
In Turkey, A Kurdish Conflict Flares — Again : Parallels With the collapse of a two-year cease-fire, Turkish forces and Kurdish militants are again killing each other in earnest. In one largely Kurdish town, residents hunker down for more bloodshed. 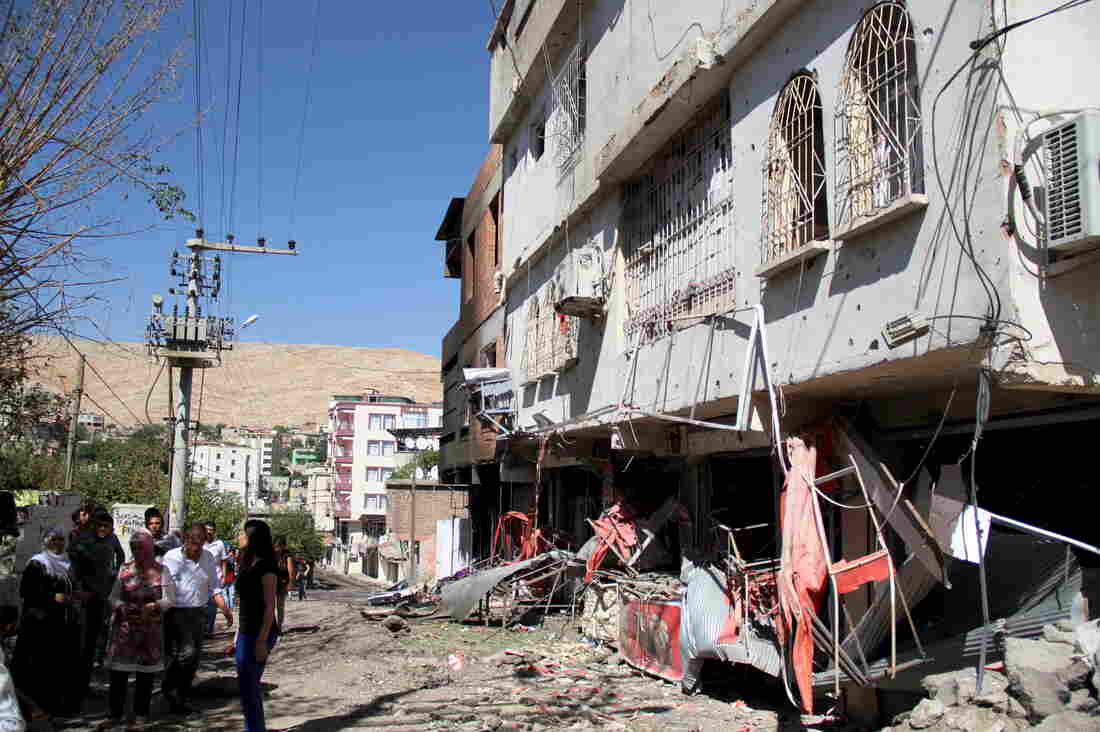 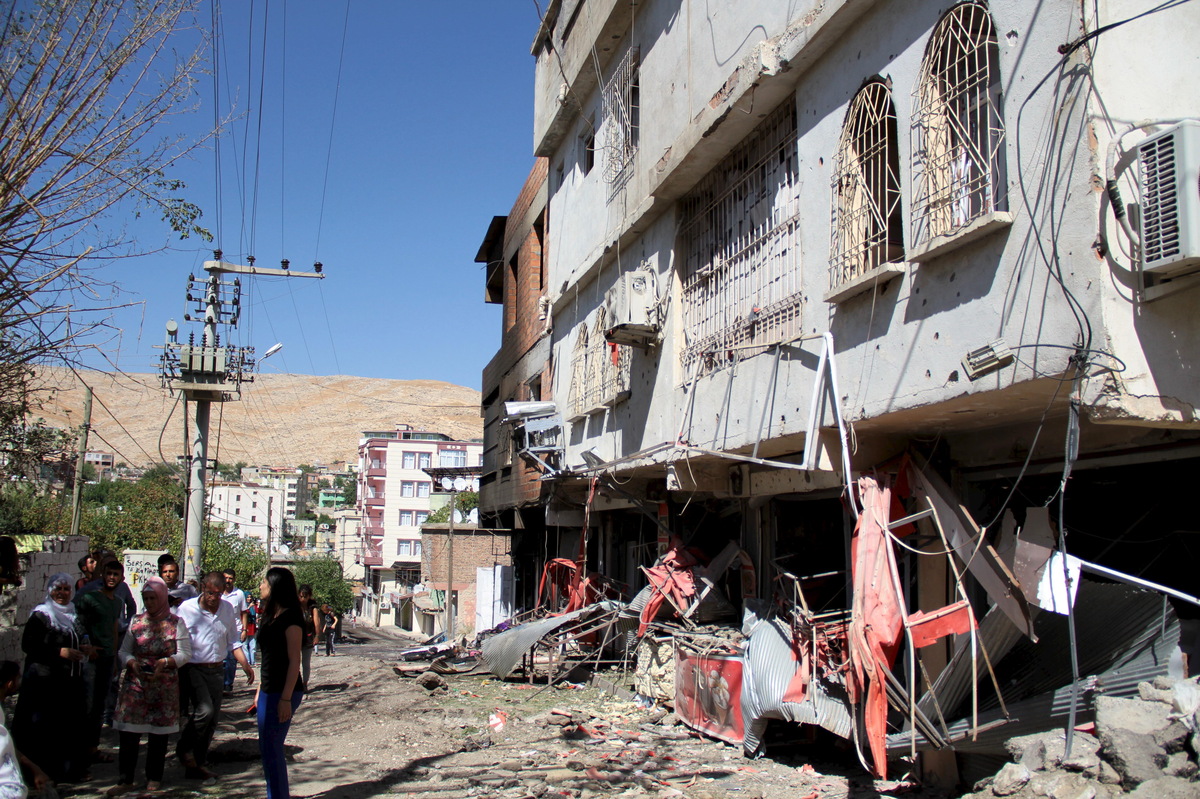 People gather outside a damaged building after clashes in Silvan between Turkish security forces and members of the Kurdistan Workers Party (PKK) youth wing last week.

In Washington, Turkey is seen as an important ally in the fight against the Islamic State, or ISIS, in Syria and Iraq. But Ankara is also struggling to quell a resurgent conflict with its own Kurdish minority.

Since last month, dozens of Turkish soldiers have been killed in roadside bombings and other attacks by the Kurdistan Workers Party (PKK). Turkish forces regularly launch operations inside small, tightly knit Kurdish neighborhoods in the country's southeast. The escalation in violence has dashed recent hopes that 31 years of conflict between Turkey and the PKK had a chance of ending.

Before It Can Hope to Fight Militants, Turkey Has Its Own Troubles To Tame

In the town of Silvan, whole neighborhoods resemble mini-war zones. Charred wrecks of vehicles, destroyed during clashes last week, lie in heaps as young boys pick over their blackened engines looking for copper to salvage.

A Return To War?

At a nearby tea house, a knot of men sits on plastic chairs around low tables dotted with small glasses of strong tea. They're discussing the violence that occurred here Aug. 19. Mahmoud Kara, whose balding head is balanced by a thick dark mustache, says the PKK's youth faction vowed to defend the area after the local mayor declared autonomy from Ankara.

"We first heard about the curfew at 1 a.m., so at that point, we all knew it was coming. Basically, nobody slept that night," he says. "At around 4 a.m., it started. I came down to see. It was clashes, shooting, explosions everywhere."

Another resident, Mehdi Azgin, says since then, many of the women and children have left the four neighborhoods that the army targeted. He also says defending the town is more than just symbolic resistance. Kurds will keep on fighting, he says, until Turkey's President Recep Tayyip Erdogan resumes peace talks with the PKK leader, Abdullah Ocalan, who has been in jail since 1999 for treason. 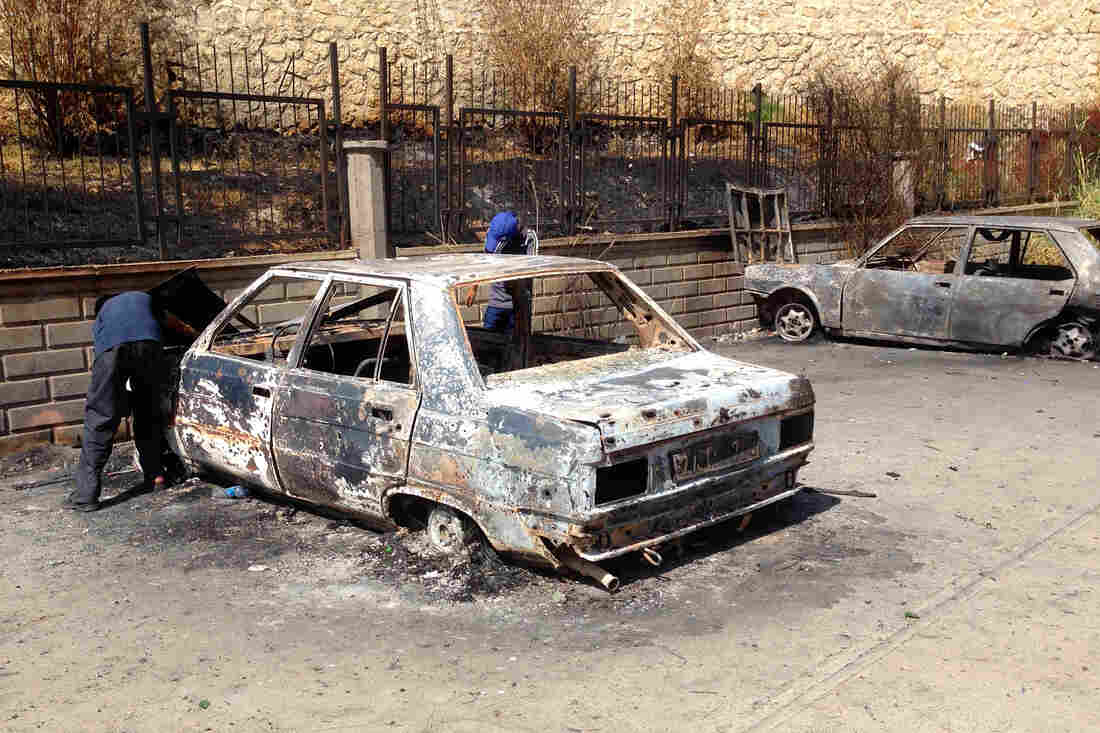 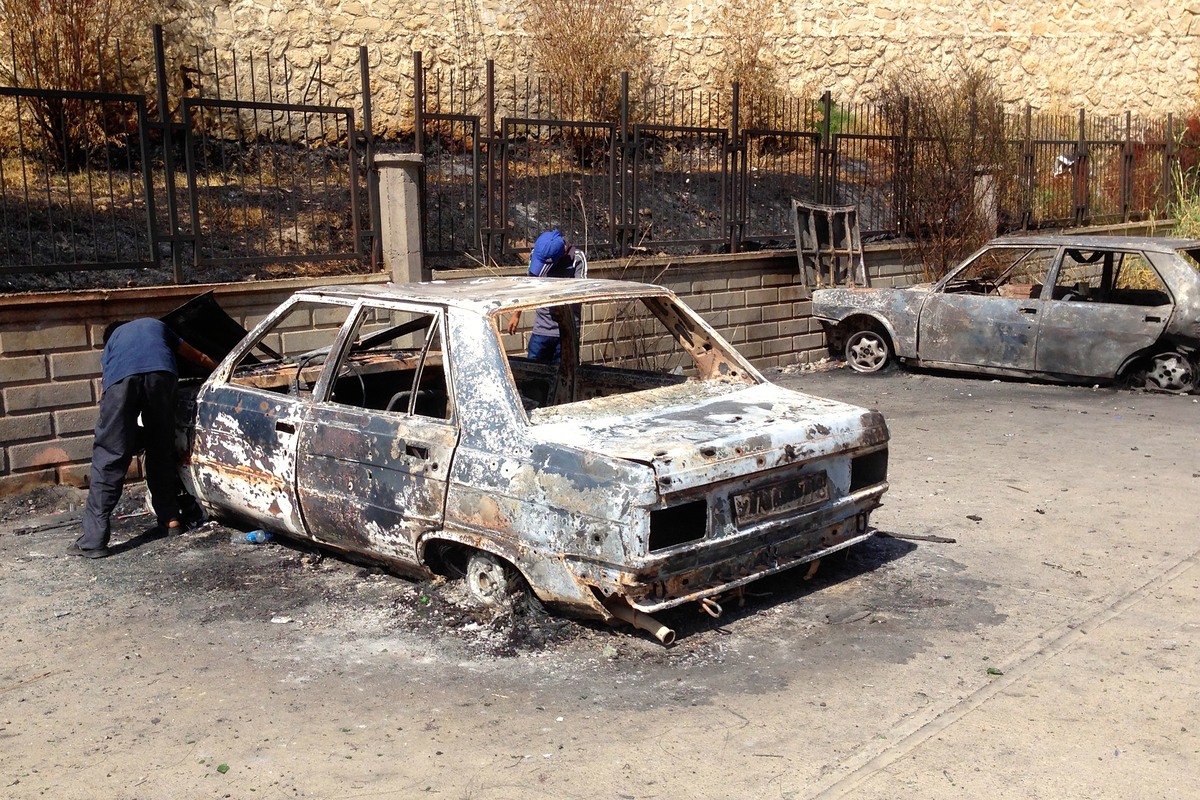 "A hundred years ago, Kurds fought alongside Turks when the nation's independence was at stake, but if the army wants to invade our homes, we will fight," says Azgin. "If Ocalan says stop, not one rifle will fire. But what's happening now is basically revenge — Erdogan is angry that a pro-Kurdish party did well in the last elections, and now we're all being punished."

A 'Systemic Crisis' For Turkey

Turkish officials say it was the PKK that broke a two-year cease-fire in July with a monthlong campaign of attacks against security forces.

The toll has military families grieving. Occasionally, a family member will denounce the military campaign against the Kurds. But most families of Turkish servicemen blame the PKK for their losses, and analysts say Erdogan is hoping that feeling will spread to other voters before snap elections take place this fall.

Columnist and blogger Yavuz Baydar says many Turks believe Erdogan is gambling with the country's security in hopes that the ruling AKP, or Justice and Development Party, will regain its majority this fall. In the meantime, he says, Turkey's largely Kurdish southeast will suffer the most.

"To say the least, Turkey is in [an] immense systemic crisis," Baydar says. "It is the ambition of the president that drives the country to an unknown. And in parallel, the PKK [is] declaring one after another autonomous areas. So the entire east and southeast of the country is dragged into murder, bombing and destruction."

For Turkey, the current unrest is a huge distraction at a time when its support in the fight against ISIS is badly needed by the U.S. For the people of Silvan, it's a fact of daily life. Hours after we left the town, security forces again clashed with the PKK youth movement there, forcing shops to close and civilians to flee as the authorities imposed another curfew.