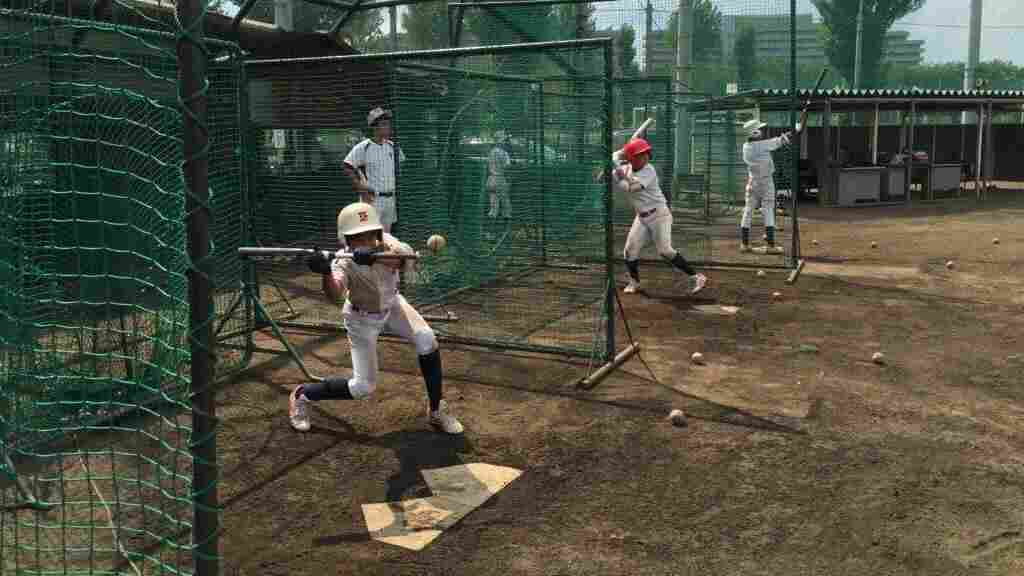 Musashi Fuchu Little League baseball players spend eight to 10 hours a day on weekends practicing on this field on the outskirts of Tokyo. This traditional powerhouse team has won the Little League World Series twice before, in 2013 and 2003, but did not qualify this season. Anthony Kuhn/NPR hide caption 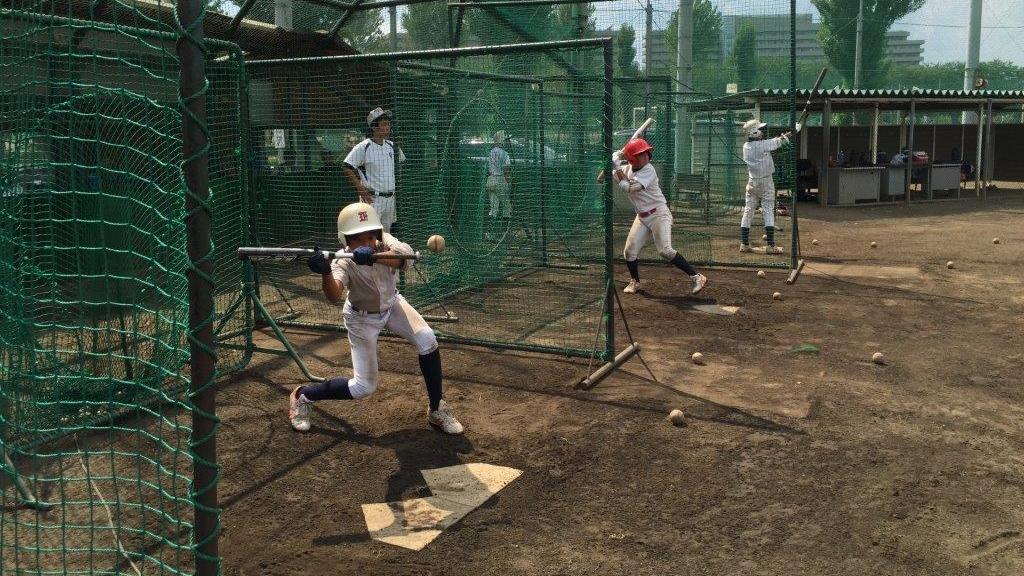 Musashi Fuchu Little League baseball players spend eight to 10 hours a day on weekends practicing on this field on the outskirts of Tokyo. This traditional powerhouse team has won the Little League World Series twice before, in 2013 and 2003, but did not qualify this season.

Once again, a Japanese team has advanced to the final four of the Little League World Series in Williamsport, Pa. The Japanese team faces Mexico on Saturday as it seeks a spot in the finals on Sunday.

Japan has won three of the past five series championships. What is the secret to its success, I wondered on a recent trip to Japan.

This year, Japan is being represented by the Tokyo Kitasuna team, which won the 2012 series. By the time I was ready to interview team members, they were already packing their bags to head for Williamsport.

So instead, on a recent Saturday morning, I paid a visit to their neighbor, the Musashi Fuchu team, winner of the 2013 and 2003 world series.

The team practices eight to 10 hours every Saturday and Sunday. Each morning is devoted just to fielding practice. The kids field endless bunts and turn one double play after another.

The team's manager, Masumi Omae, who has helped build the team into one of Japan's best, watched from the dugout.

"This is the Japanese way of doing sports, the same in karate as in baseball," he told me. "It emphasizes what we call konjo, or grit and tenacity. Repetition is important. You've got to repeat movements until you master them."

All focus on honing technique until it is flawless and instinctive. It's this way that Omae believes led to the team's victory two years ago.

"We had no star players," he says, "but our discipline and repetition of basic plays made our defense strong and helped us to finally win." 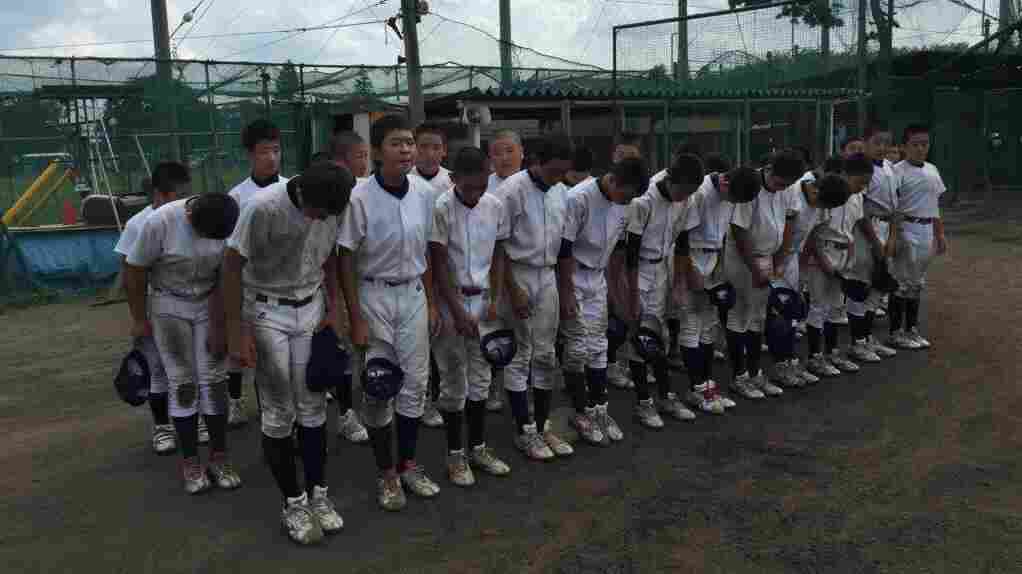 The Musashi Fuchu players show proper manners by bowing to the field ahead of practice on the outskirts of Tokyo. Anthony Kuhn/NPR hide caption 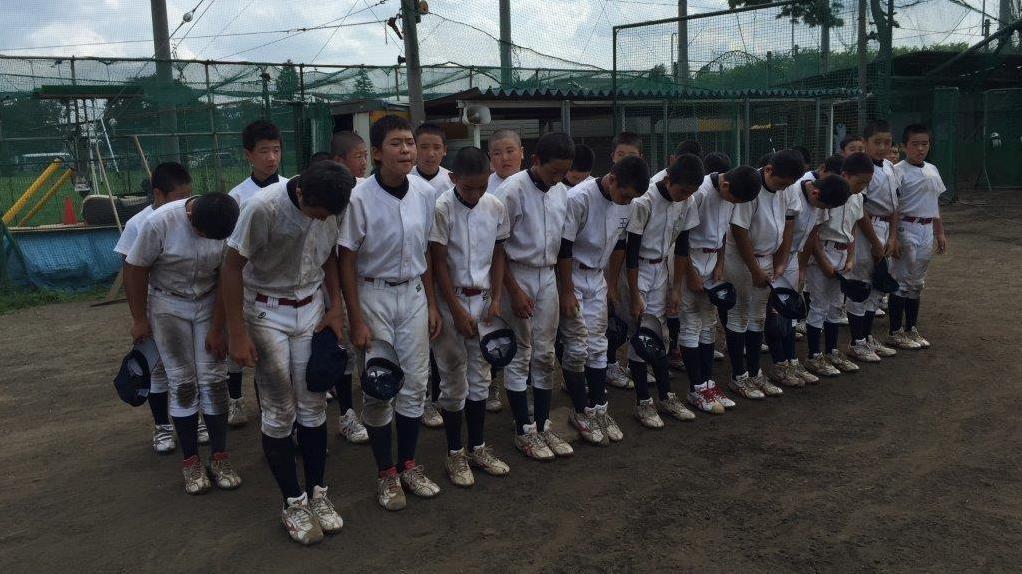 The Musashi Fuchu players show proper manners by bowing to the field ahead of practice on the outskirts of Tokyo.

"The American players were physically so big," he recalls. "The pitcher we played against in the final game was 6-foot-4. The one in the first game was 6-foot-5. We thought they must have been coaches, not players."

The Japanese players don't have a lot of power hitters. So instead of swinging for the fences, they focus on getting runners on base and advancing them with bunts, stolen bases, sacrifice flies and even squeeze plays. Players call it the "small ball" strategy.

Asked who his favorite player is, Okada says he admires Boston Red Sox slugger David Ortiz, because he led his team to victory in the World Series the same year as Okada's team won in Williamsport. Okada adds that he was impressed with Ortiz's steely defiance in the games that followed the Boston Marathon bombing in 2013.

Okada says he aspires to lead his own team through humility and self-sacrifice.

"It's about the parts other than baseball," he says. "As captain, I try hard to do whatever the other kids don't want to do, like cleaning the field, picking up stray balls and cheering my teammates on."

In the afternoon, the batting cages come out for hitting practice. Coach Kohji Ohno explains that a perfect swing is not the only thing that matters.

"Beautiful form is important," he says, "but so are good manners, such as greetings. For example, the kids bow to the field before the game. Perhaps American players don't do that."

Every practice session is a family affair. Parents make lunch and drinks for the kids and coaches. Everyone takes responsibility for meticulously grooming the infield, in the same focused and respectful way karate practitioners clean the straw mats in their dojo, or training hall.

American Bessie Noll experienced all of this. She lived with her parents in Japan and played for the Musashi Fuchu team. She says she sacrificed six years' worth of weekends and social life to play ball. It was a lonely, trying experience, being the only foreigner — and the only girl — on the team.

"I wasn't aware of the strain it was putting on my family, both my mom and my dad, as well as myself," she says. "But it really is very taxing, just because the Japanese community value system expects so much from every family member."

Noll is now a mechanical engineering major at Stanford and plays for the university's softball team. She speaks admiringly of her former Japanese teammates' drive for perfection.

"You cannot take that away from them," she says emphatically. "I am the baseball player I am today because of this program, and boy, do they know how to make baseball players! But, you know, it comes with a sacrifice."

Noll says that Japan has taken a sport that originated in the U.S. and turned into something very different, and very Japanese.

Indeed, when baseball was introduced into Japan during the 1868-1912 Meiji era, it was seen less as a leisurely pastime and more as a tool to forge national strength and moral character.

There's even a touch of the metaphysical in Japanese baseball. I noticed, for example, that manager Omae disappeared at lunchtime. When he came back, I asked him where he had gone.

"We have another national championship game coming up," he says matter-of-factly, "so I went along with parents' representatives to a shrine dedicated to the guardian god of our city to pray for victory."

There are apparently no baseball gods in the shrine, but Omae says the deity there is a very powerful one and can grant any wish.