Accessibility links
Seeking Asylum In Germany Can Mean Living In Limbo : Parallels The process drags on for years, and during the interim, applicants are unable to find a home, job or future. Advocates say the system needs streamlining. 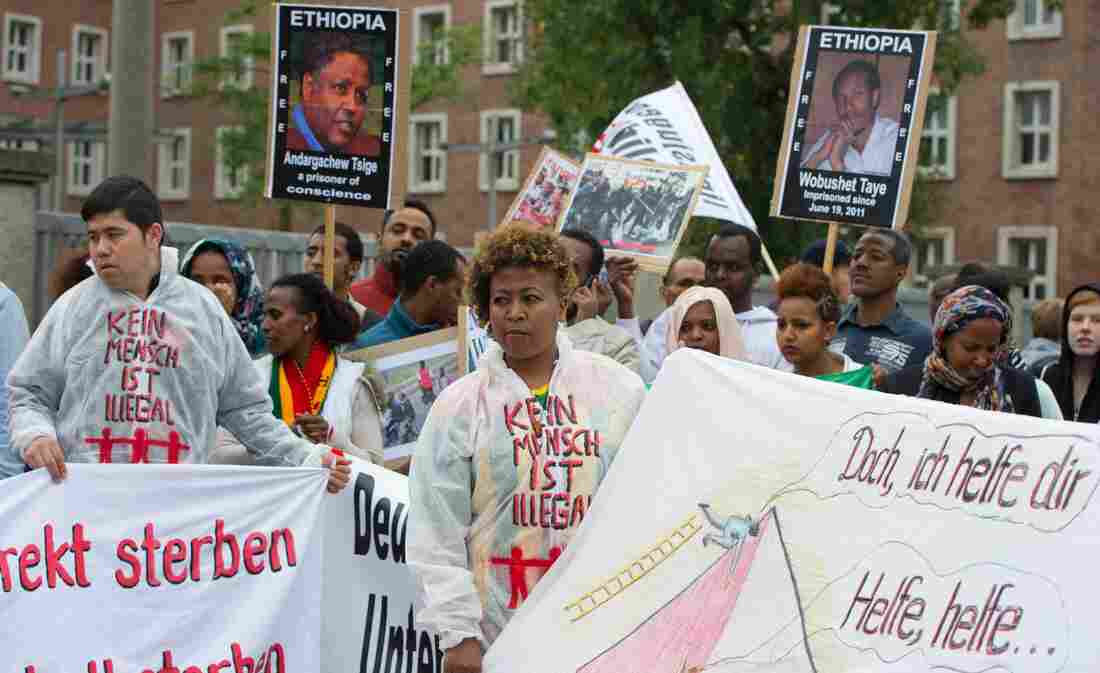 Asylum seekers rally in front of the German Office for Migration and Refugees with vests that read "no one is illegal" in Nuremberg on Aug. 17. Migrants from Afghanistan, Ethiopia, Iran and Syria called for faster asylum procedures, the freedom to choose their accommodation and the abolition of camps where they must stay. Timm Schamberger/EPA/LANDOV hide caption 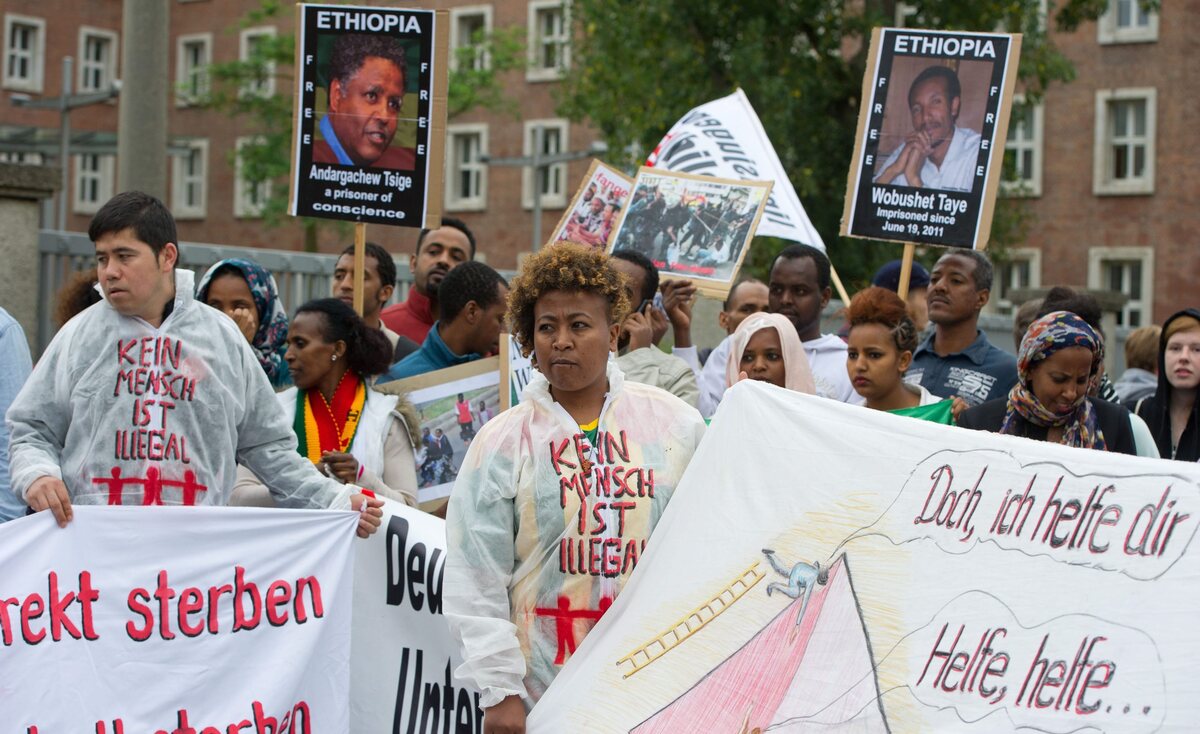 Asylum seekers rally in front of the German Office for Migration and Refugees with vests that read "no one is illegal" in Nuremberg on Aug. 17. Migrants from Afghanistan, Ethiopia, Iran and Syria called for faster asylum procedures, the freedom to choose their accommodation and the abolition of camps where they must stay.

Germany may appear welcoming to refugees who are coming here these days, but in reality, the government is pretty picky about who gets to stay.

At least half don't get the green light, including a group of asylum seekers from Afghanistan and Iran who set up a protest tent in downtown Nuremberg to draw attention to their plight.

They say they fled war and persecution, but their claims for asylum were rejected, in part because where they come from doesn't top the list of countries Berlin considers at war or oppressive.

They've ended up trapped in Germany, unable to work or move out of refugee centers. Nor can they go back to the countries from where they came.

Mohammed Hosseini, 30, came here from Tehran more than three years ago. He converted from Islam to Christianity, which is forbidden under Iranian law.

Hosseini says a German judge who recently reviewed his case acknowledged that he faced a death sentence in Iran for converting. Still, the court rejected his asylum claim.

Hosseini asks: If he knows I'm going to die, why won't he accept me as a refugee in this country?

Many of the migrants surging into Europe say their destination is Germany, which has been accepting more new arrivals than any other country. But what happens to many of the new arrivals once they are processed can be as difficult as getting to Germany in the first place.

Another protester, Jan Ali Habibi, says he's also in danger. The 22-year-old is a member of Afghanistan's oppressed Hazara minority and hails from an area where the Taliban are strong. 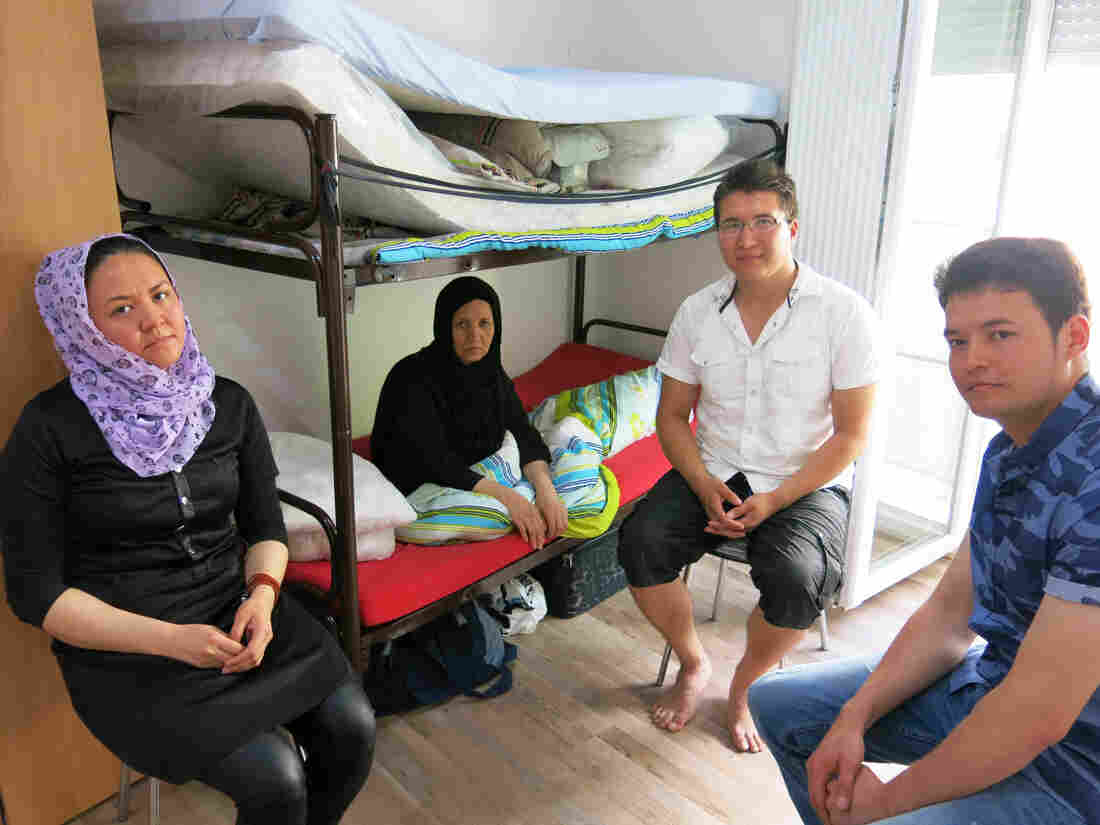 Afghan Jan Ali Habibi (right) with his family. They sought asylum in Germany 5 1/2 years ago and are still in limbo. Soraya Sarhaddi Nelson/NPR hide caption 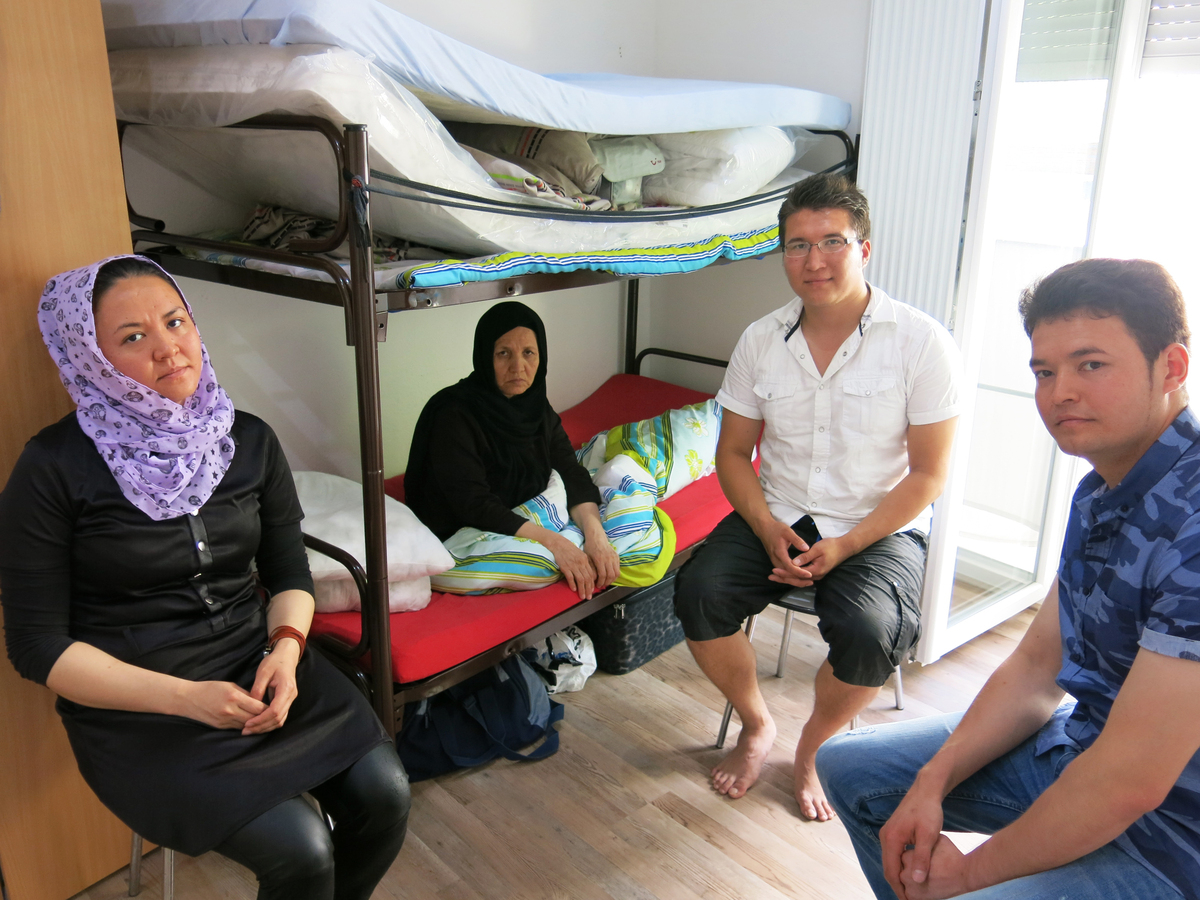 Afghan Jan Ali Habibi (right) with his family. They sought asylum in Germany 5 1/2 years ago and are still in limbo.

He says he, his mother and two younger siblings fled Afghanistan for Iran after their oldest brother disappeared on the way to work.

Habibi says they were in danger of being deported back to Afghanistan by Iranian authorities, so they sought asylum in Germany 5 1/2 years ago.

So far, the German government has refused to grant them residency. That's left Habibi and his relatives among the 115,000 asylum seekers here who have a temporary status called duldung — which literally means toleration.

They can't be deported with that status, although Habibi says he can't find work because employers don't want to hire someone who could be gone three months from now.

As a result, the family can't afford to move out of their 10-by-15-foot room in a group home in Nuremberg. They share a bathroom, kitchen and laundry facilities with dozens of other asylum seekers.

Habibi says in German, which he is slowly learning: "It's like living in a jail cell. But at least a person in jail knows how long his sentence is going to be."

Calls To Streamline The Process

Alexander Thal, a spokesman for the Bavarian Refugee Council, sympathizes with the young Afghan.

Thal says the asylum review and appeals process needs to be streamlined so it takes no more than two or three years, especially at a time when the government is being overwhelmed by refugees.

He says being stuck in legal limbo takes a steep psychological toll on refugees, especially those living in group homes like Jan Ali.

Thal blames the government for failing to prepare for the surge in refugees, which began years ago.

At the Federal Office for Migration and Refugees, which is based in Nuremberg, chief of staff Kathrin Hirseland says they are struggling to cope with the skyrocketing numbers of asylum seekers compounded by the hundreds of thousands who are here in search of jobs rather than sanctuary.

"They are here because they want better opportunities for their family, they want a job, they are looking for better financial situation because the situation in the western Balkan countries is not easy," says Hirseland. "There is a lot of unemployment. We understand why they are coming, but they have no grounds for asylum or refugee protection."

She says her agency is opening four new processing centers, hiring a thousand more people and tweaking the requirements to speed up the case review of the more than 800,000 asylum seekers arriving in Germany this year.

But that won't affect the tens of thousands of others who are languishing in Germany's drawn-out appeals process.