Accessibility links
With Eyes On Europe, Iraqis Line Up To Leave Baghdad : Parallels Terrified of frequent suicide attacks and fed up with a plummeting economy, Iraqis see the mass migration in Europe as a chance to get out of the country. 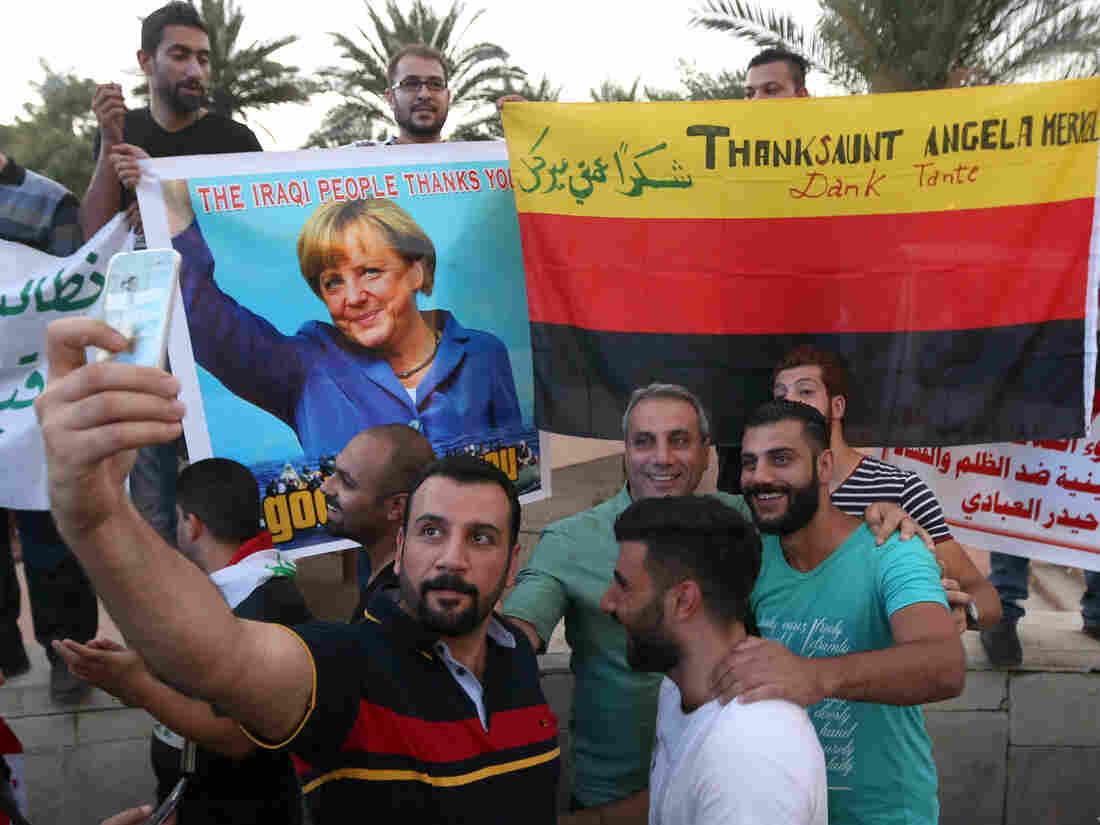 Iraqi protesters hold a picture of German Chancellor Angela Merkel during a demonstration calling for government reforms on Friday. Thousands of Iraqis are leaving the country, fleeing violence and a dire economy and drawn toward the perception of a welcoming Europe. Hadi Mizban/AP hide caption 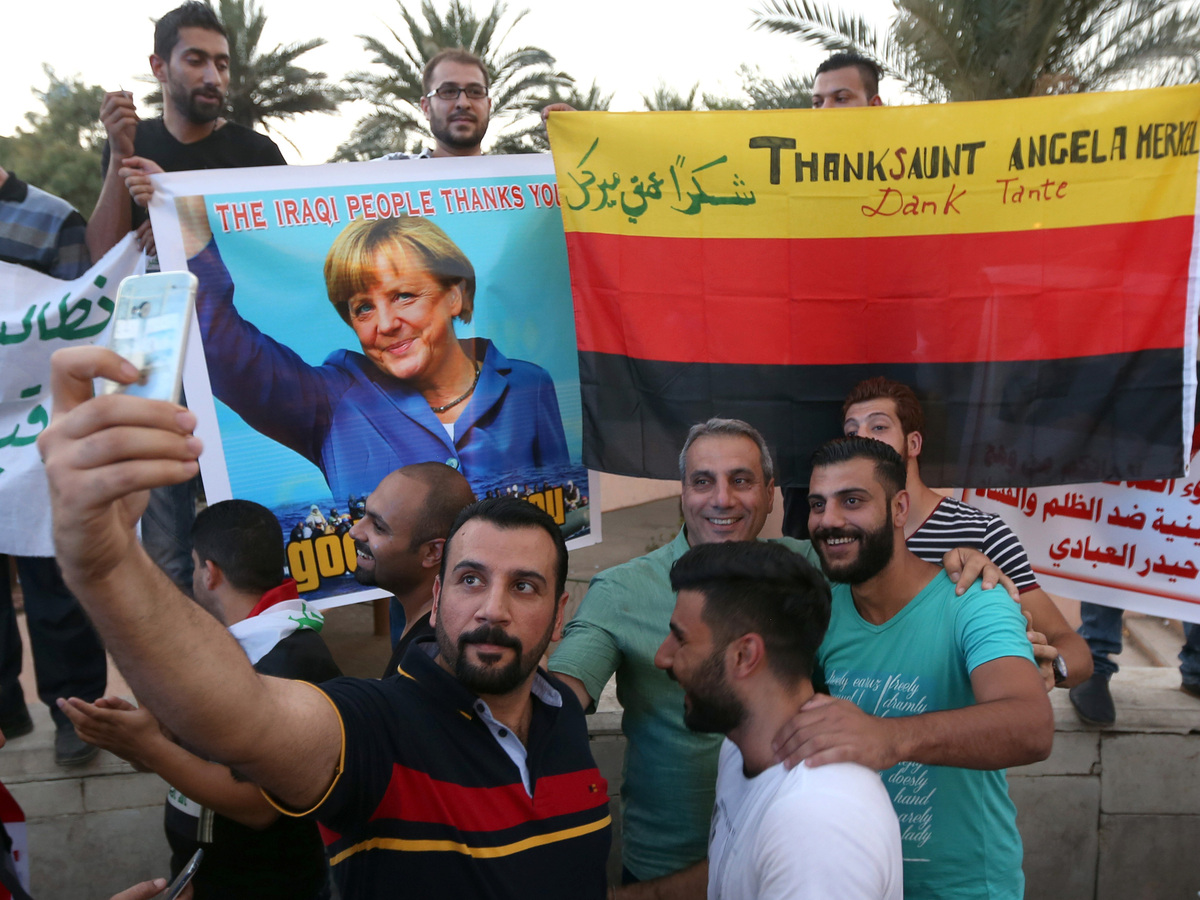 Iraqi protesters hold a picture of German Chancellor Angela Merkel during a demonstration calling for government reforms on Friday. Thousands of Iraqis are leaving the country, fleeing violence and a dire economy and drawn toward the perception of a welcoming Europe.

At first it seems lively outside on the weekend in Baghdad — the lights are bright in open-air cafes, music streams from beribboned cars in a wedding party and at Ali Hussein's juice stand, decorated with plastic bananas, they're squeezing oranges on old brass presses.

But even as Hussein offers me a sharp, fresh juice, he's downcast. When I ask about the subject on everyone's mind here — the migrant flood into Europe — he laughs. "We were just talking about this!" he says. Several of his friends just passed by to say farewell.

Conversations in the Iraqi capital, between the rich and the poor, travel agents, taxi drivers and demonstrators in Friday protests, show a city galvanized by the news from Europe. The violence and decrepitude here are nothing new, but now there is a perception of an opportunity for an alternative, and many are seizing it.

Fleeing Iraqis already form a significant chunk of the migrants streaming into Europe. The International Organization for Migration says roughly five times as many Iraqis — about 5,000 people — have arrived illegally in Greece through July this year than in all of 2014.

But the mood in Baghdad suggests that number is set to rise. Everyone seems to know several friends and relatives who have left abruptly this summer.

Mehdi Salman, a travel agent, says the number of daily flights to Turkey, as well as the cost of tickets, has tripled. People sell their cars, furniture and clothes for the cost of the plane ride and to pay the smugglers. It's great for business, but he thinks it's terrible for Iraq.

"I want them to stay, and I usually tell them not to leave," he says. But to little avail: "People reach a stage, they cannot take any more."

Iraqis have plenty to run away from. People cite violence since a swath of the country is controlled by ISIS and various forms of fighting kill hundreds each month, according to the U.N. Low oil prices have also shattered the economy, and one of the world's most corrupt governments provides little in the way of services.

At the taxi line at the airport, Ahmed Abdullah, tall and curly-haired, is saying goodbye to friends heading to Istanbul, and thinking about joining them in Europe in a couple weeks, if they make it safely.

The incentive is simply that he's seen so many people take the trip lately, and believes Europe is more welcoming now than before. And of course, the situation in Iraq isn't getting any easier "There's no security here," he says angrily. "There are bombs." And there's little opportunity to get a better job than driving a taxi a few days a week.

Nothing's getting better in Syria, either, where the vast majority of the newcomers in Europe come from. Rabia Banna, a Syrian in Lebanon, works with a charity helping Syrians.

"The people coming from Syria, they are fleeing the danger like the fighting, the barrel bombs, the rockets," Banna says.

Rockets and barrel bombs are still falling on civilian areas across Syria, where the war kills thousands every month. Banna says that as summer turns to fall and the weather gets stormy, fewer people will try to cross the sea — but there will be more in the spring.

The hundreds of thousands arriving in Europe are still a small percentage of the millions of refugees languishing in Turkey, Lebanon and Jordan, though most of them are too poor to make the trip. Banna says it's the remnants of the middle classes who can just manage to pay the smugglers' fees. But still, he sees no end to the exodus.

"I think it will be the same for the next years," he says.