Accessibility links
An Art Scene Flourishes Behind Closed Doors In Saudi Arabia : Parallels There isn't much public space to be creative. Artists Arwa Alneami and Ahmed Mater are trying to change that. They host a salon where creative people gather and exchange ideas. 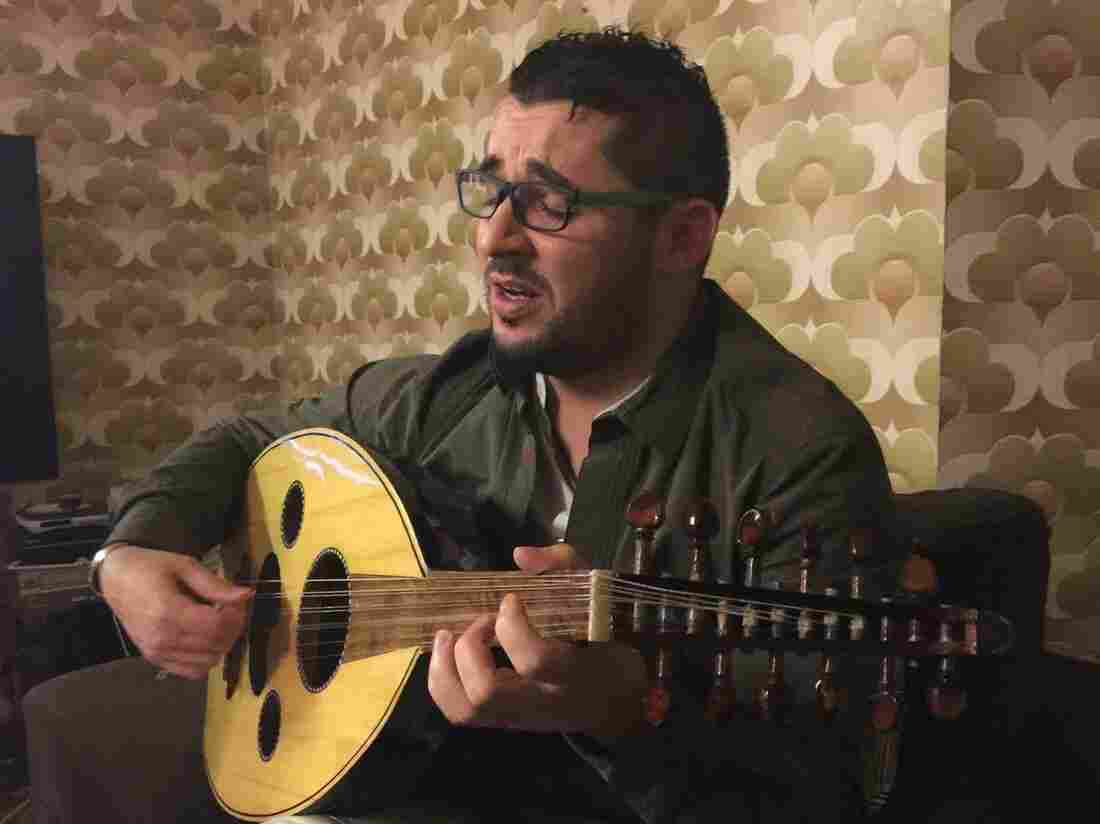 Her work is made up of photographs and videos from a theme park in her hometown of Abha, in southern Saudi Arabia. The rules for women there have become so strict that the park has signs telling them they can't scream loudly on the rides.

"You should hear the voice of the ladies, they cannot scream," she says, and then imitates the stifled screams of the women clad entirely in black in her videos.

Alneami is a young Saudi artist pushing against the many red lines in the conservative society where she lives. She's not breaking them, she says. She's just reflecting society back on itself. 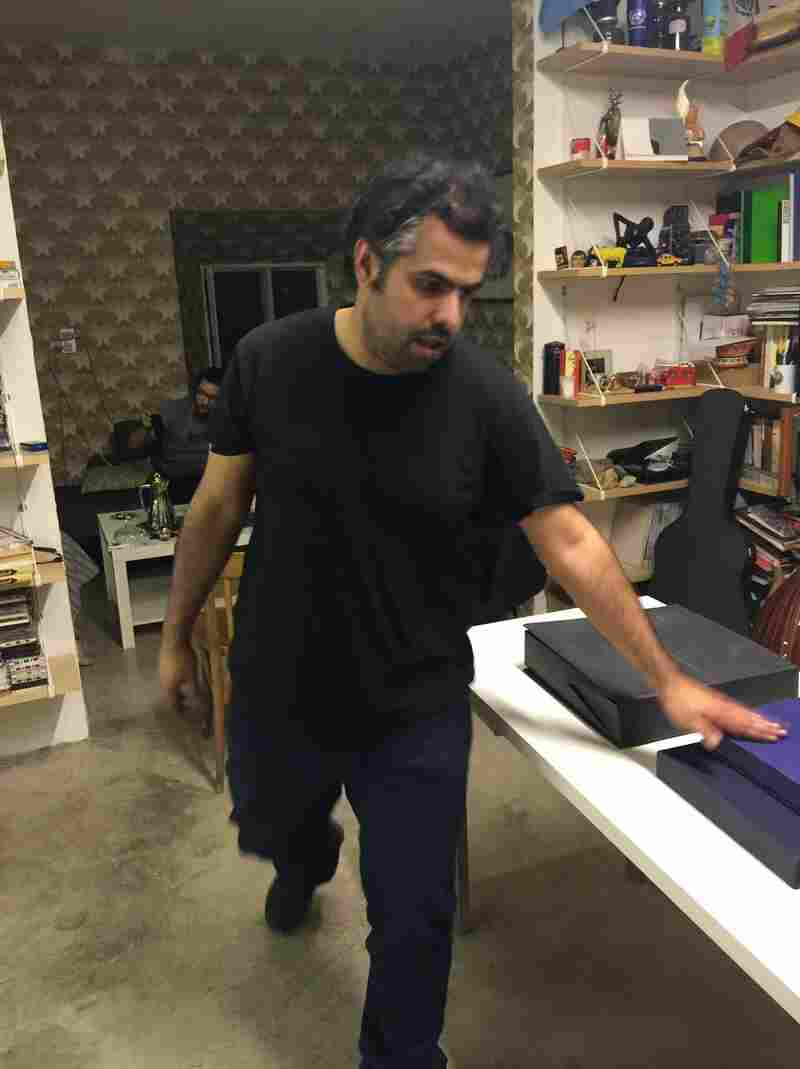 Saudi artist Ahmed Mater works in a Jeddah studio. His artwork has been shown in Italy, Paris and London. Leila Fadel/NPR hide caption

Saudi artist Ahmed Mater works in a Jeddah studio. His artwork has been shown in Italy, Paris and London.

She sees herself a bit like the court jesters of old.

She's married to Ahmed Mater, one of Saudi Arabia's most influential artists. Like his wife, he works in a variety of media — sculpture, video, photography. His works have been shown in Italy, Paris and at the British Museum.

In Jeddah, the two are a bit of an artist power couple.

Their private studio is a gathering place for creatives — something like Gertrude Stein's salon in Paris in the 1920s, except this is Saudi Arabia today, where anything that challenges the accepted religious and political norms is generally done behind closed doors.

"It's a place where we meet and we chat about art and see and create and think about what we're going to do in the future," Mater says, showing me around the studio.

The walls are covered in photographs and paintings. The floor is concrete, since it gets covered in paint splatter anyway. There's a room of computers for editing photographs, videos and graphics. In the back, there is a big space where they screen movies and host stand-up comedy for their friends. And then there's a little sitting area where people hang out.

This is a tradition that dates back thousands of years, to a time when gatherings of intellectuals and artists were commonplace.

"I actually take this idea from the Hijaz people of Jeddah and Mecca," Mater says, referring to the western region of Saudi Arabia, along the Red Sea coast. "They have this idea of majlis, where people have one day in the week where people come and gather and talk about what's happening around, what intellectual things are happening, what's happening in politics."

This space is unique in a country where there are no cinemas, live theaters or public spaces where men and women can mix and exchange ideas freely.

Mater shows me around the studio in a converted home, where his gatherings are held. "The library is very important," he says. The couple have built a substantial library of books they've collected on their travels. There are novels, books about art, religion, history and a little library of films. Musical instruments are tucked beneath the shelves.

Like their salon, this kind of library is unique in Jeddah. Before this, Mater says, "We didn't have an art library here."

It's open to budding artists who want to come and learn, but the studio is unmarked, and people find out about this space through word of mouth.

What they're doing is not illegal. The studio is in a private home. But they don't want to draw too much attention. They have a simple guideline for those who come: You need to know one person who visits the studio, and you must be tolerant.

That's not to say there aren't public spaces for art in Saudi Arabia. There are nearly 60 art galleries across the country.

In 1965, Jeddah was home to Saudi Arabia's first art show in modern times. Back then, the scene was more vibrant, with cinema, music and live theater. But in the late 1970s, a conservative religious establishment took control of the country's social life and education and that vibrant scene was shut down.

But Qaswra Hafez, a gallery owner in Jeddah, says things are slowly changing.

"The shell remains to be conservative," he says. "But 70-plus percent of Saudi [Arabia] is under 30 years old, who have spent their lives with the communications and the Internet and digital media, and they have access to the world in the palm of their hands."

The younger generation is drawing on the country's cultural past to create art. As midnight nears, one of its exemplars shows up.

Mohamed Hashem has an oud, a Middle Eastern lute, slung over his shoulder. He's dressed in long jean shorts, a button-down shirt and square-rimmed, hipster glasses. He begins to play, and the others clap and praise God.

Hashem is one of the most respected oud players in the country. He clings to the tradition of music from his hometown, Mecca, where the Muslim religious pilgrimage has brought influences from all over the world.

He draws from traditions that date back hundreds of years. He learned them as a child in his grandmother's living room in Mecca, where she held cultural salons of musicians and poets in mixed company — both men and women.

It was a different time, a time that is all but forgotten. But the 30-year-old hopes to revive it.

"Art comes from our history," he says. And he begins to play again.

In a previous version of this story, Arwa Alneami's name was misspelled as al-Naimi.