Accessibility links
Stranded In Hungarian Camps, Migrants Press To Leave : Parallels Migrants from as far away as Afghanistan have been placed behind barbed wire in detention camps in Hungary. NPR's Lauren Frayer visits a camp where the numbers — and the frustrations — keep growing. 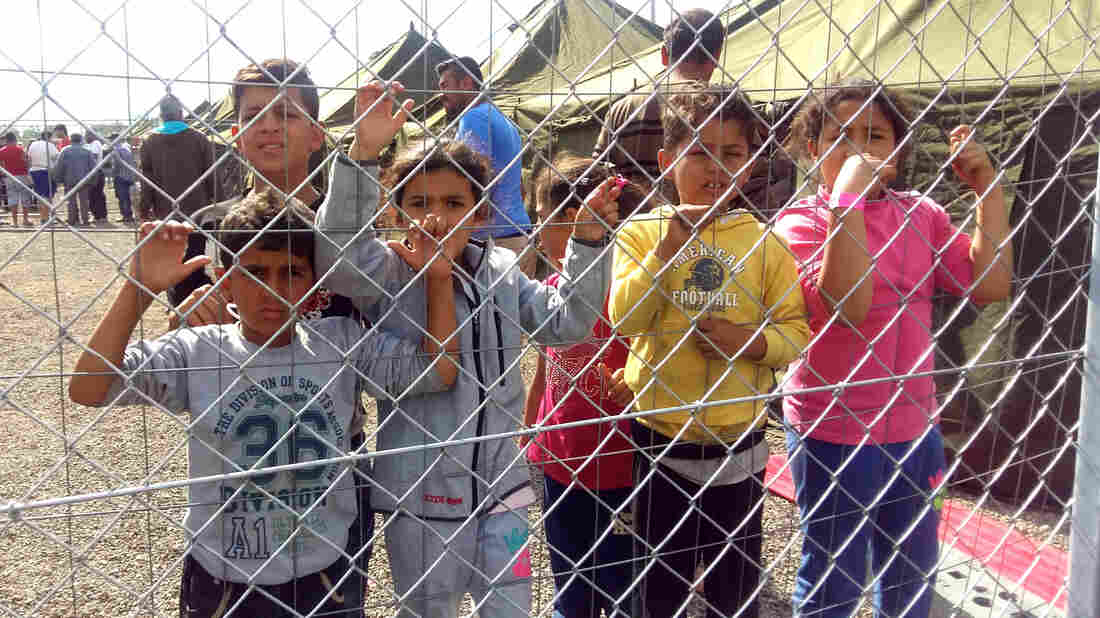 Refugee children from Syria stand behind a fence where they and their families are being detained temporarily in Hungary, near the border with Serbia. Many want to go to Germany, which has been welcoming to those seeking asylum. Lauren Frayer for NPR hide caption

Children from Syria and Afghanistan rattle a double chain-link fence topped with barbed wire at this migrant detention camp nestled in cornfields near the Hungary-Serbia border. They're locked up here.

I stick my microphone through the fence, and dozens of people run over, pleading for help.

"We can leave [and travel onward] with our own money — we have enough! Just let us leave your country — that's it," says one Syrian man. "Please help us, if you can!" pleads his wife. Their toddler screams: "We want go!"

The mother, Zeinab Mustafa, hand-washes her little boy's socks and hangs them to dry below the barbed wire.

"I'm a teacher. But in our country, it's very difficult. Our children, we need to live in peace," Mustafa says. She fled her home in Aleppo, Syria, with her husband and three children. "And now we are in prison. We just need to go. Please let us pass."

Thousands of migrants and refugees have crossed from Serbia into Hungary in recent days — and police have promptly locked them up. It's the border of the European Union. Hungary says it's trying to fingerprint all of them, in accordance with EU law. Migrants are required to register and request asylum in the first EU country they enter, but many of the people here passed through Greece, also an EU member state, without registering. So they're bewildered that Hungary is stopping them now. 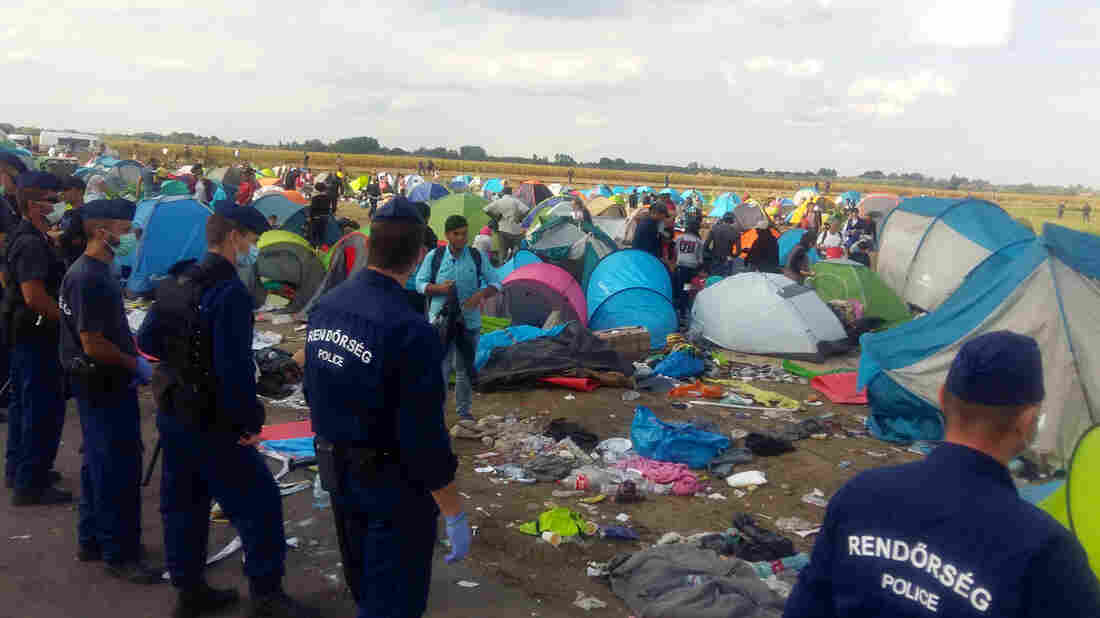 Hungarian police guard hundreds of migrants and refugees sleeping in a cornfield near an overcrowded detention center on the Hungary-Serbia border. Lauren Frayer for NPR hide caption 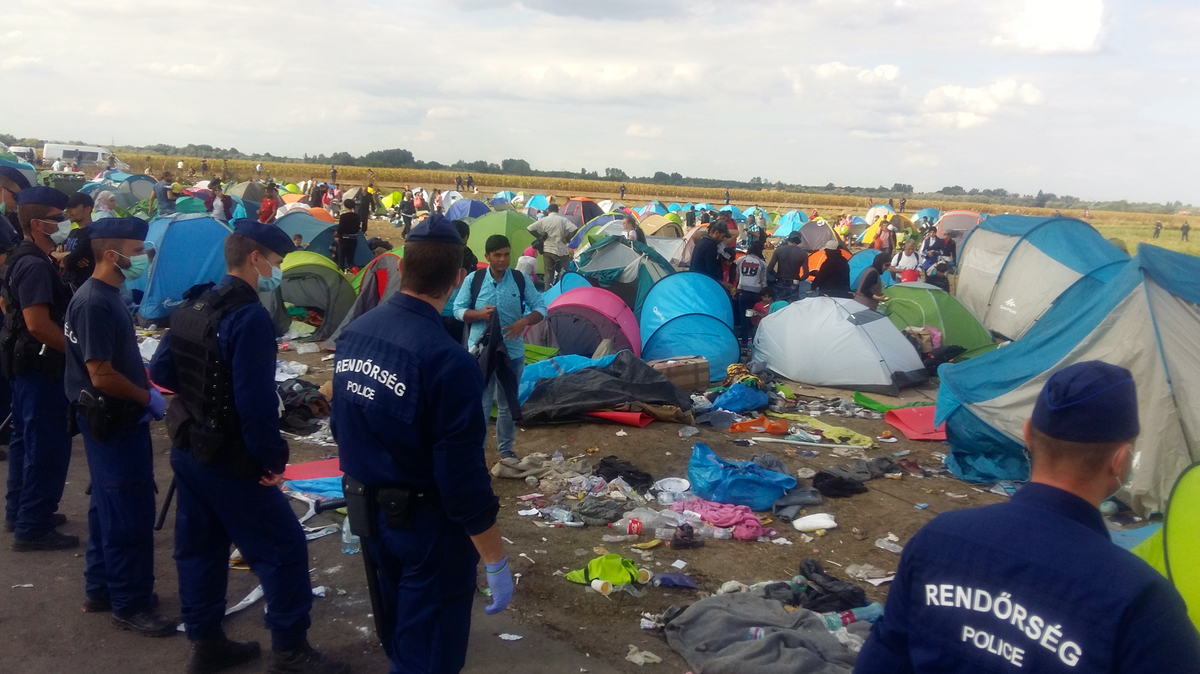 Hungarian police guard hundreds of migrants and refugees sleeping in a cornfield near an overcrowded detention center on the Hungary-Serbia border.

The fingerprinting is taking days, with a backlog of thousands of migrants.

In Today's Migrant Crisis, Echoes Of Hungary's Troubled Past

People are getting angry. Scuffles have broken out between police and desperate migrants seeking answers. Some fear that if they're fingerprinted, they'll be prevented from reaching their final destination. For many of them, that's Germany.

"We come here just in transit. We don't need to sleep here or even sit down here," another Syrian man says. He hasn't had his fingerprints taken, and doesn't know when that will happen. He's waiting. "Maybe tomorrow, maybe in two or three days — maybe in Budapest."

We are 110 miles from the Hungarian capital, in a remote farming area. Hungarian authorities chose this site for a new detention center, opened earlier this week. It's close to the border where migrants are crossing. It's also far away from any public transport — and from the eyes of international media, based in Budapest.

"People want to go. We are humans, not animals," says Aref Parsa, who left Kabul, Afghanistan. "So why this?" he asks, kicking at the barbed-wire fence that separates us.

A Full Camp, With More On The Way

The Hungarian police here wear surgical masks to protect themselves from the migrants.

At the gate, a green military bus pulls up with dozens more migrants. The camp is full, and about a thousand people are sleeping in a cornfield nearby, surrounded by police.

Among them is a 17-year-old girl from Damascus who has lost her family.

"I don't know where my family is — maybe inside the camp," says Judy al-Shtawi.

She manages a smile, despite three days sleeping outdoors in the cold. She got separated from her mother, father, brother and two sisters amid the chaos of crossing the border from Serbia. Shtwai is stuck on one side of the barbed-wire fence, and she's hoping her family is on the other. But the guards can't tell her anything.

She scribbles her relatives' names in Arabic on my notebook. Maybe you can find them, she says to me.

Hungary insists it's struggling to implement EU law, by registering these people. But it may actually be breaking it.

"I think human rights standards are certainly not being met," says Marta Pardavi, a human rights lawyer with the Hungarian Helsinki Committee, whom I met in Budapest a day before driving to the Hungary-Serbia border. "Many families with small kids locked up near the border, in a transit zone that is basically quite a remote place — an out of sight, out of mind venue — where the army and police are carrying out most of the measures."

The U.N.'s refugee agency says 42,000 more migrants are headed this way from Macedonia and Serbia in the next 10 days. It's calling on the international community to help Hungary cope with the influx.

Meanwhile, this cornfield where people are forced to wait is strewn with garbage and human waste. As I walk away, dark clouds roll in. It's about to rain.