Accessibility links
Previous Papal Visits Changed Little, But Cubans Hopeful For Pope Francis : Parallels John Paul II urged openness during his 1998 tour of the island, but progress has been slow in the 17 years since. Pope Francis, who helped reopen U.S. relations, arrives next week. 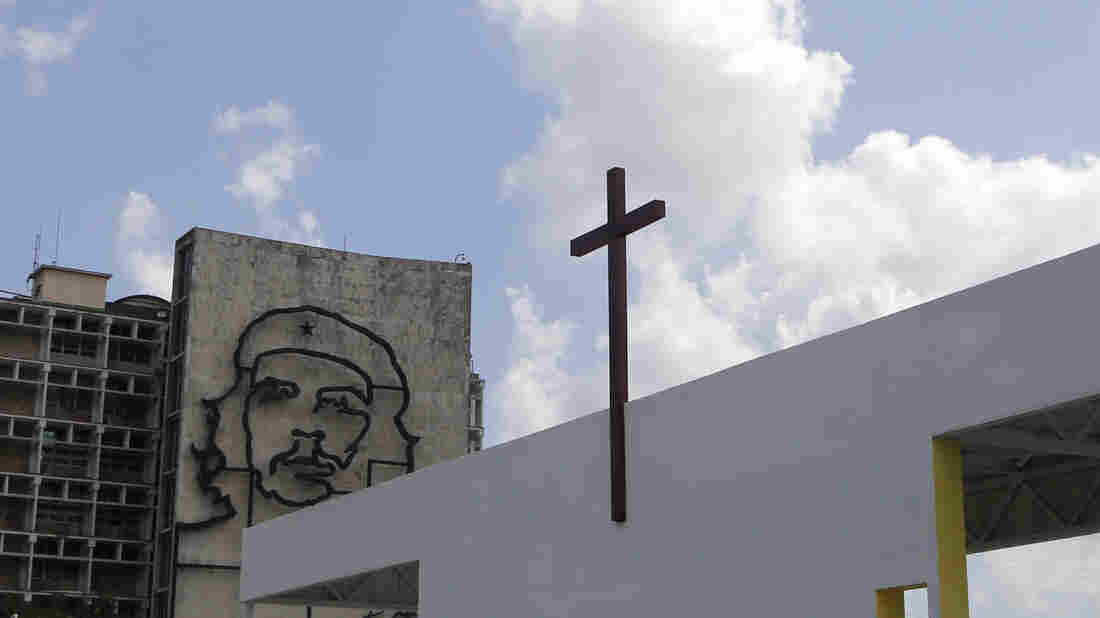 The altar where Pope Francis will celebrate Mass in Revolution Square in Havana near a government building decorated with the likeness of revolutionary hero Ernesto "Che" Guevara. The Mass is scheduled for Sept. 20. Desmond Boylan/AP hide caption 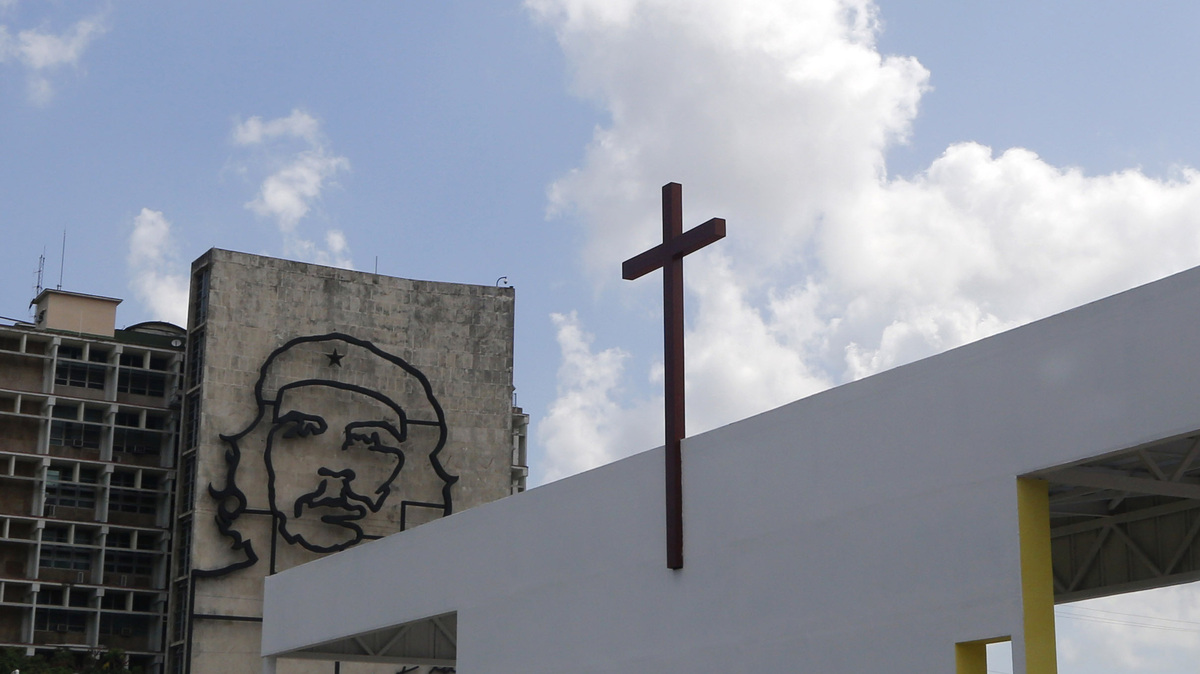 The altar where Pope Francis will celebrate Mass in Revolution Square in Havana near a government building decorated with the likeness of revolutionary hero Ernesto "Che" Guevara. The Mass is scheduled for Sept. 20.

Pope Francis will be headed to Cuba for three days next week, before his eventual trip to the U.S. The visit comes at a time of change for the island nation, and the pope is expected to play a leadership role there.

Yet it's not the first the first time a pope has paid a visit to Cuba. In 1998, Pope John Paul II arrived in Cuba — and it was clear from the start that the visit had a specific purpose.

Fidel Castro was standing alongside as John Paul II said those words. Not in 40 years had he shared the stage with such an important and provocative figure.

In the next few days, thousands of Cubans flocked to the pope's open-air masses. Among them was an English teacher in Camaguey who gave his name only as Carlos, saying his political views had gotten him in trouble. He said then that Cubans are often forced to attend big political rallies — but going to see John Paul II was different.

"Everyone came here because they wanted to come here," Carlos said, adding that the pope's visit meant, for Cuba, "hope, and freedom of religion."

But 17 years have passed since that papal visit, and it doesn't seem to have had quite the impact reformers hoped it would have.

True, Christmas is now recognized as a religious holiday in Cuba. The government has allowed some churches to be rebuilt, and church authorities now publish their own magazines. But some of the goals the pope set for the church during that visit — like the right to religious education, or obtaining access to radio or television air time — have not been fulfilled.

Father Jose Conrado, an outspoken priest known for his willingness to stand up publicly to Cuba's leaders, says that the pope did his part by giving Cubans a direction. But Conrado thinks Cubans have been too passive, and has been especially critical of Cuba's low-key church leader, Cardinal Jaime Ortega.

Conrado lays most of the blame with the Cuban government, saying it has responsible for the slowness in winning more freedom for the Catholic church there. 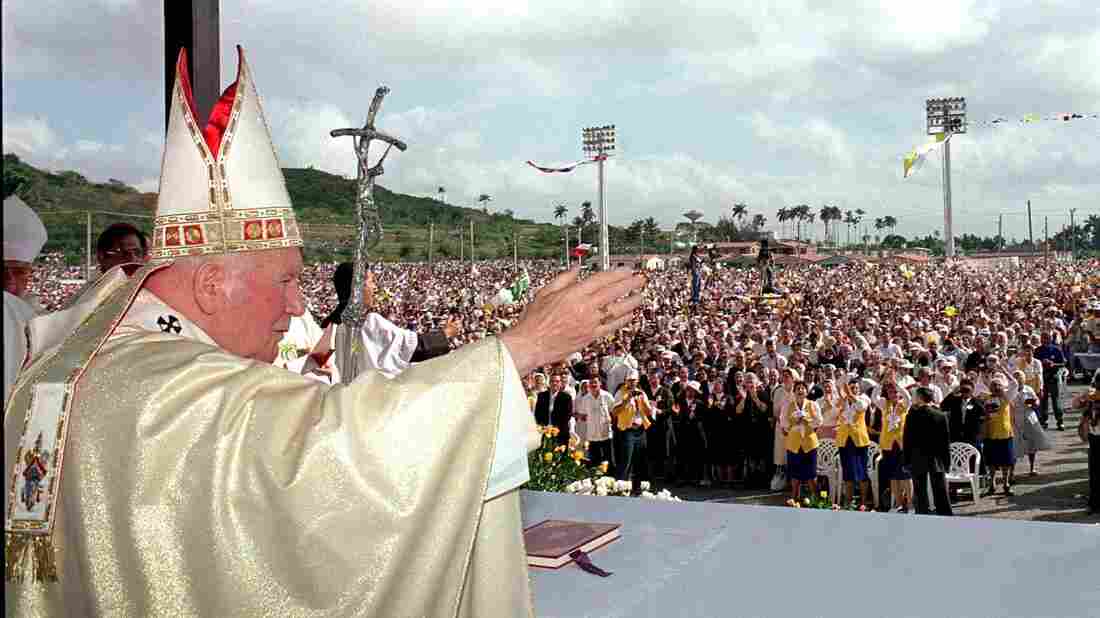 Pope John Paul II stands before worshipers gathered at the Mass in Santa Clara, Cuba, in January 1998. It was the first of four Masses to be celebrated by John Paul II during his five-day visit to the island. AFP/Getty Images hide caption 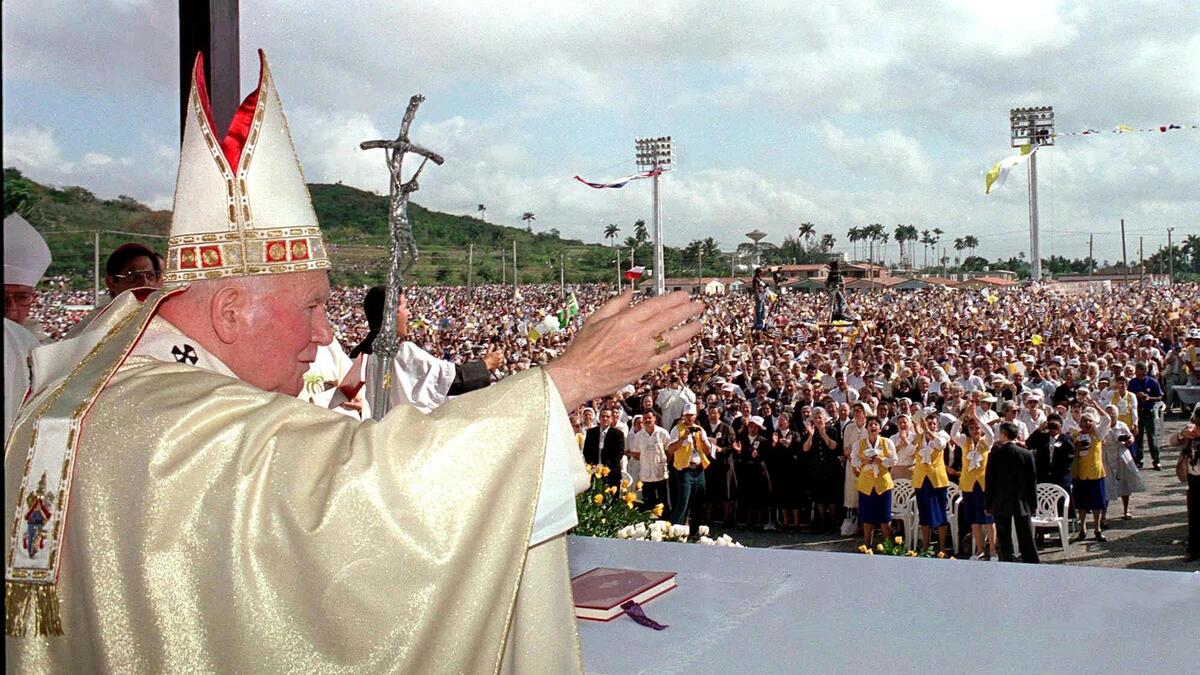 Pope John Paul II stands before worshipers gathered at the Mass in Santa Clara, Cuba, in January 1998. It was the first of four Masses to be celebrated by John Paul II during his five-day visit to the island.

"The ones who apply the brakes on reform are the ones who have the power — in Cuba, that's the government," he says.

In 1998, when he was still Bishop Jorge Bergoglio of Buenos Aires, he wrote a book titled Dialogues between John Paul II and Fidel Castro. In it, he endorsed dialogue with Cuba's government as a necessary step in ending its isolation.

Last year, he put that belief in practice, serving as an intermediary in the negotiations between the Obama Administration and the Cuban government. Now, Pope Francis is in position to take one more step.

"I think he'll reflect the longstanding position of the Catholic church — that Cuba, in order to have a future, must be able to trade and open up to the world," says Austen Ivereigh, author of The Great Reformer, a biography of Pope Francis. 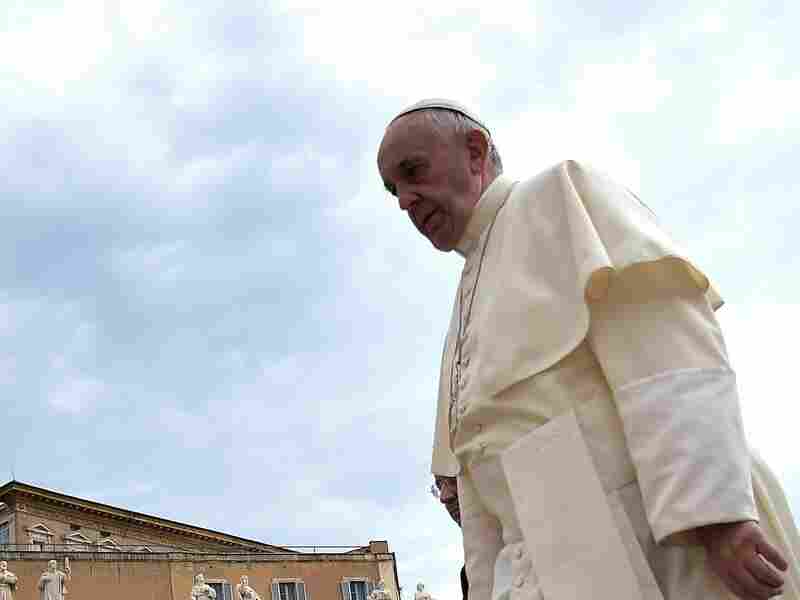 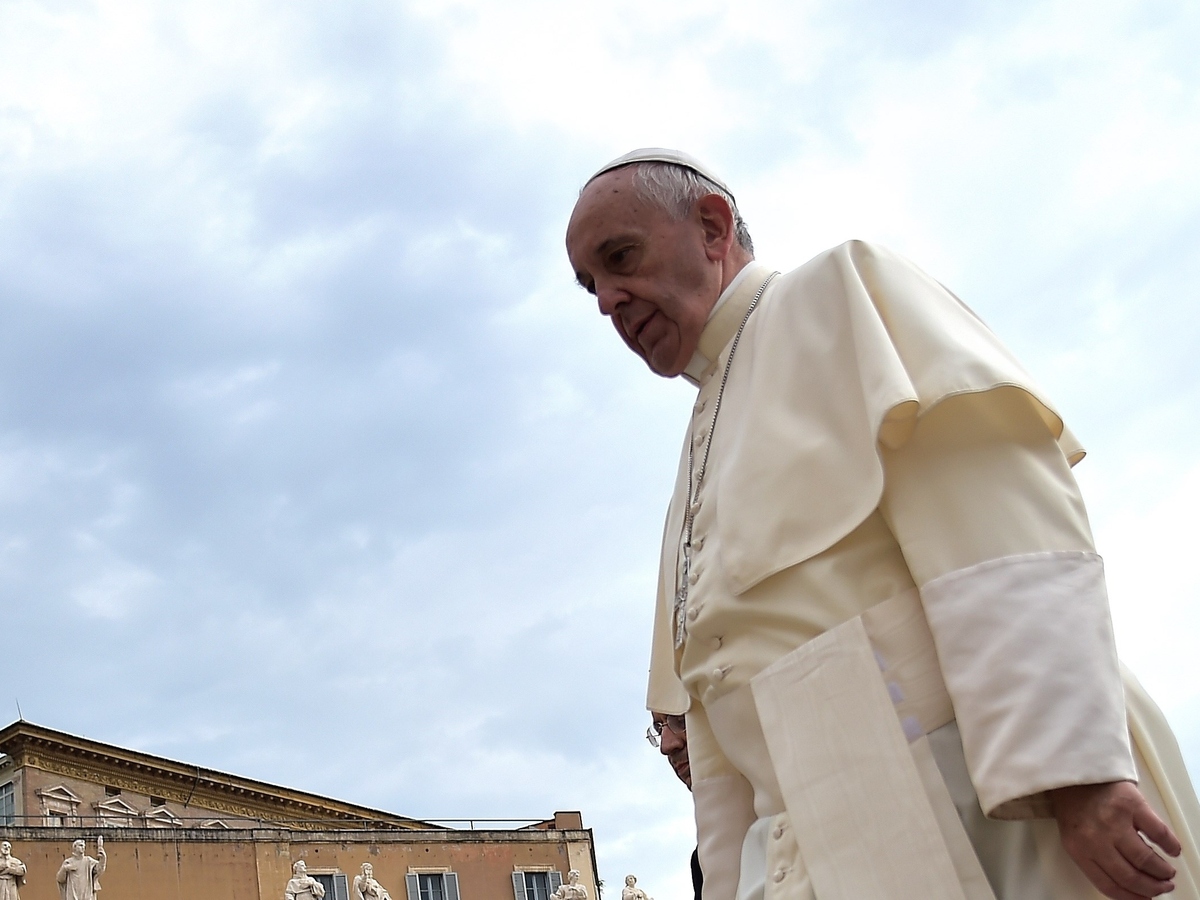 Pope Francis arrives in Saint Peter's square for his weekly audience at the Vatican on Sept. 2.

Ivereigh says that, as a bishop in Argentina, Bergoglio fit the mold of a Latin American nationalist, something that should give him special standing in Cuba.

"I think he will have tremendous credibility," he says. "That, in turn, will bolster the church's role in helping to nurture and broker the transition to a pluralist democracy."

One measure of Francis' boldness in dealing with Cuba will be whether he names a replacement for Cardinal Ortega, the nonconfrontational church leader, who's now 77 years old. But regardless of his moves, there are limits to how big a role the church will have on the island.

Catholicism is not yet as popular there as church leaders there hoped it would become after the first papal visit — or after the second, by Pope Benedict in 2012. Evangelical denominations do better, as does Santeria, the Afro-Caribbean religious practice.

Another factor: Cuban authorities haven't been willing to cede much authority to the church as an institution outside their direct control.

"I think it has to fear, with the church as with everything else, that if it gives an inch, it may be losing much more," says Eusebio Mujal-Leon, a professor at Georgetown University, a Catholic institution, where he writes about the Cuban government's relations with the Catholic church. "They have gotten used to a very vertical system of control, and so for them to cede anything is to cede too much."

That was certainly the view when Fidel Castro was in charge. But his younger brother, Raul, with whom he shared a Jesuit education, may be more open. After meeting with the pope in May, Raul said he was so impressed by Francis that he might actually start praying again.