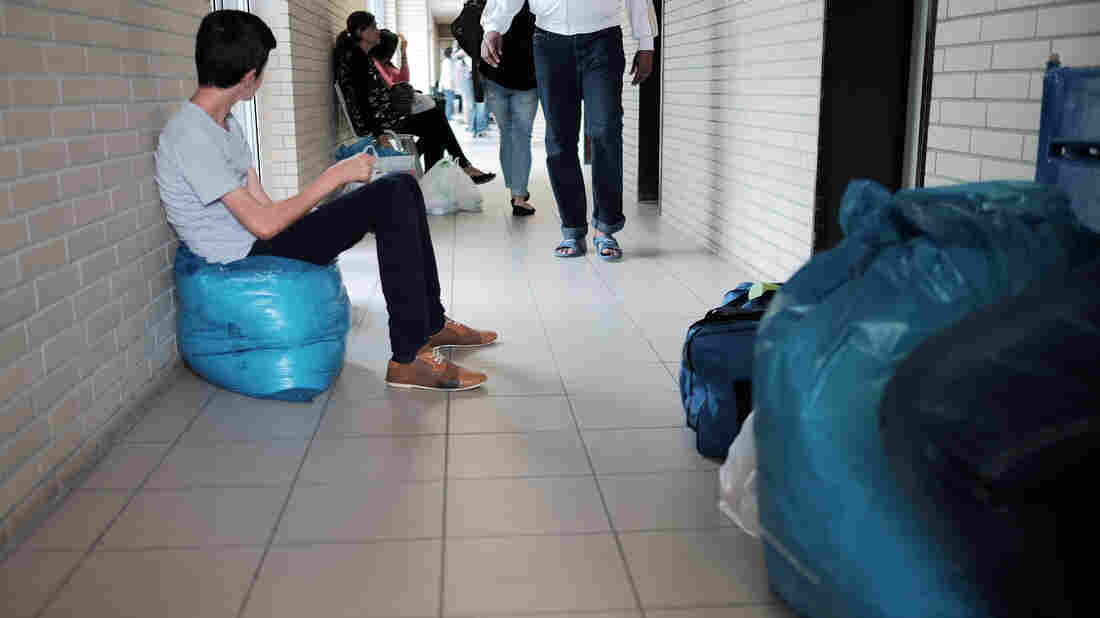 Migrants seeking asylum wait at the registration center on August 27, 2015 in Ingelheim, Germany. Germany is receiving more than 1,000 new migrants a day from countries like Syria, Eritrea and Afghanistan. In some cases, those migrants include unaccompanied minors, as NPR's Soraya Sarhaddi Nelson found at a similar center in Munich. Thomas Lohnes/Getty Images hide caption 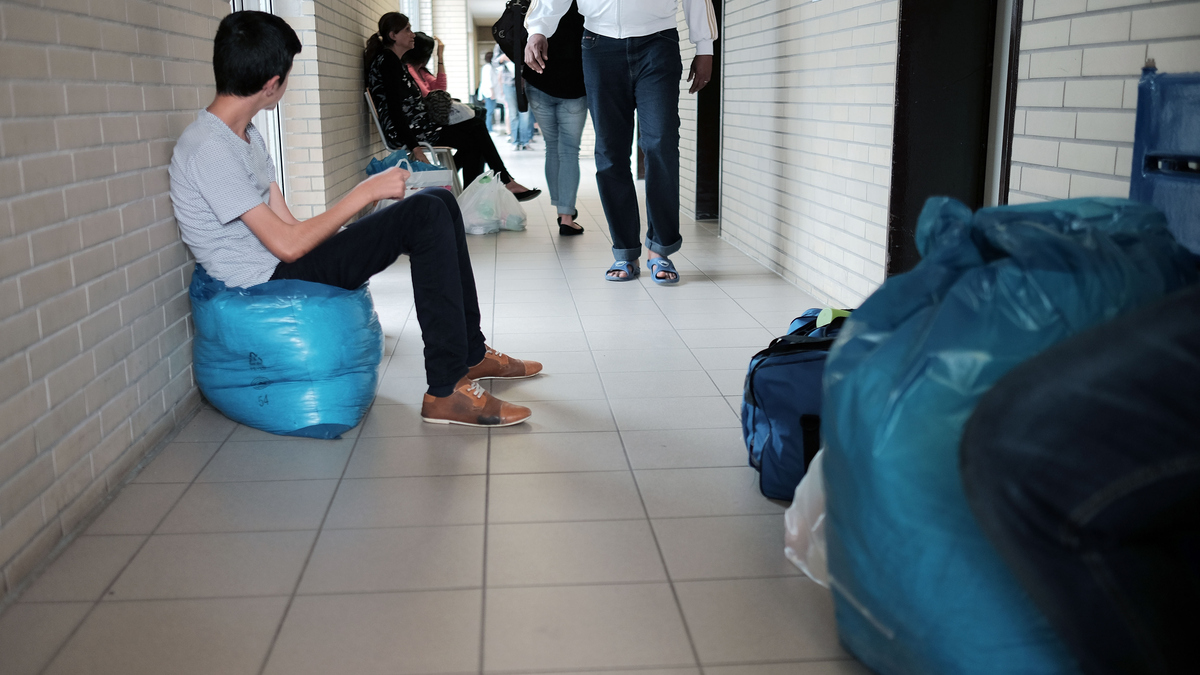 Migrants seeking asylum wait at the registration center on August 27, 2015 in Ingelheim, Germany. Germany is receiving more than 1,000 new migrants a day from countries like Syria, Eritrea and Afghanistan. In some cases, those migrants include unaccompanied minors, as NPR's Soraya Sarhaddi Nelson found at a similar center in Munich.

Among the steady stream of asylum-seekers pouring into Germany every week, there are scores of children traveling on their own.

Over Labor Day weekend, 195 of them arrived in Munich, including 17-year-old Syrians Malaz and Wissam. NPR is identifying them only by their first names because they are minors dealing with difficult personal and legal situations.

Of the two boys, Malaz is the more outgoing. The hazel-eyed teen grabs Wissam's arm and with a big smile, says: "We are friends!"

Theirs is a new relationship, forged two days earlier when they met at a Munich migrant intake center located in Bayernkaserne, a German military barracks built during the time of the Nazis. The teens say they look out for one another in the male dormitory filled with strangers from many countries.

Malaz says he finished 10th grade in Damascus and that his family paid $3,000 to a smuggler to get him to Germany. He wants to learn German and go to school here, at least for a while.

Wissam winces at the thought of his friend leaving, and says it's very hard. He says he only has one goal: "I want to be safe, here."

"They are supposed to go to specialized homes for young people and of course we don't have enough places now because the numbers have gone up considerably," Steinhauser says.

Other refugee advocates say the increase has been three-fold in Munich over last year. The European Commission in a recent report estimated 4 percent of the migrants that arrived in Europe last year were unaccompanied minors.

At least four out of every five unaccompanied minors were boys, and most came from Afghanistan, Eritrea, Somalia and Syria, according to the report. Refugee advocates say the children's parents send them here to escape poverty or war and other violence, or to protect them from being drafted.

The European Commission report says the children's favorite destinations are Sweden and Germany, where they look for work in order to send money back to their families.

Officials and refugee advocates say that, like the adults, the children coming to apply for asylum almost never carry identity documents. Steinhauser says German authorities estimate 40 percent of the unaccompanied minors are actually adults who lie about their age to avoid deportation. In most cases, Germany won't send children back before they turn 18, even if their asylum requests are denied.

"Authorities I think are wrong in half those cases, if not more," Steinhauser says. "Because when those young people they arrive here, they have gone through very, very hard situations, so they look old when they come here."

One of the places the children go to recover is a newly opened group home in Munich run by hpkj e.V., an organization that provides education and therapy to at-risk children. Ninety boys and girls ranging in age from 6 to 17 who came to Germany over the past few months live in a building run by the organization.

One of the home's directors is Anna Lena Goedeke, who says they provide unaccompanied children a stable environment where they eat three healthy meals a day, learn German and, most importantly, heal.

"When they are here, it's too early to look deep [into their problems]," Goedeke says, but adds they are evaluated to make sure they won't hurt themselves or others.

Occasionally signs of the conflicts from countries they left behind erupt at the home, Goedeke says. For example, some of the Afghan residents who are Pashtuns won't associate with ethnic Hazara residents. Nor do Eritrean and Somali kids tend to like each other, she says.

Goedeke says for the most part, the young residents quickly settle into their new routine and are happy just to be kids again. Laughter echoes in the large playroom, where a dozen smiling boys crowd around a foosball table.

Even so, it will be a long time before these children are whole, says hpkj e.V. administrator Jutta Stiehler.

"During the night, maybe the ghosts come back, the fear and the sleeplessness," she says, adding that she fervently hopes these children will heal "in the soul and in the heart."