Accessibility links
Trained In Budapest, Middle Eastern Doctors Return To Aid Migrants : Parallels Budapest's medical school attracts students from all over the world. Many return to their countries of origin to practice medicine. Some graduates have come back to Budapest now to care for refugees. 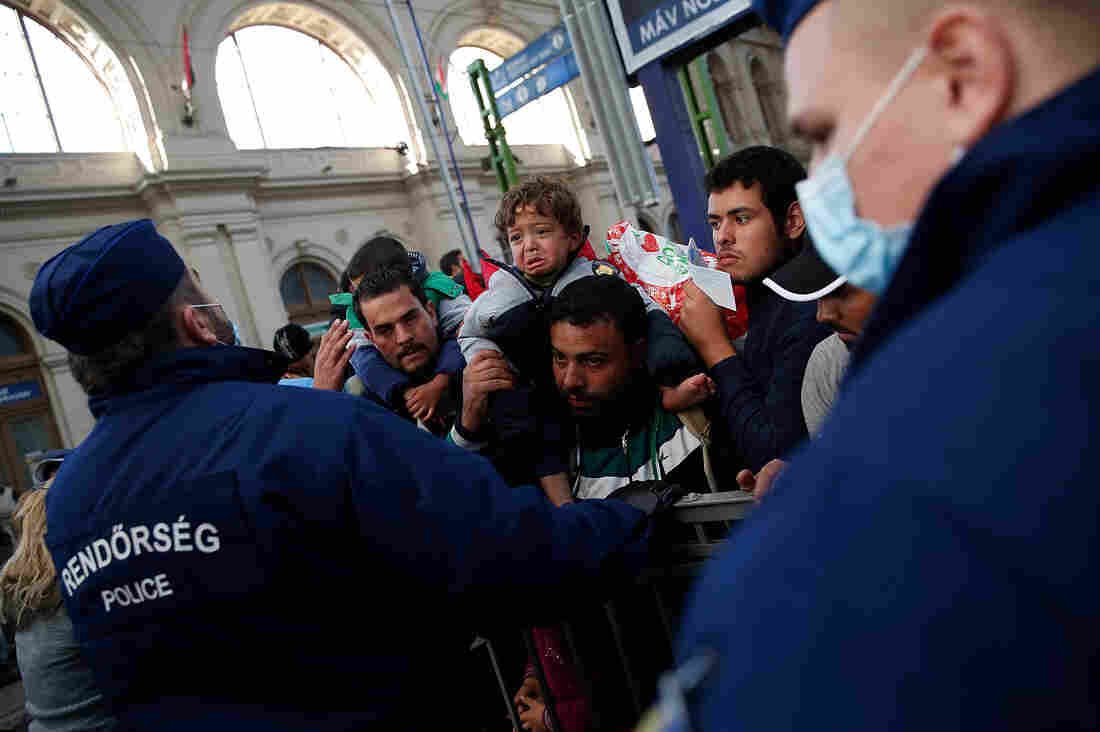 A boy sits on his father's shoulders, part of a crowd of migrants waiting to board a train leaving for the Austrian border at the Keleti railway station in Budapest. Win McNamee/Getty Images hide caption 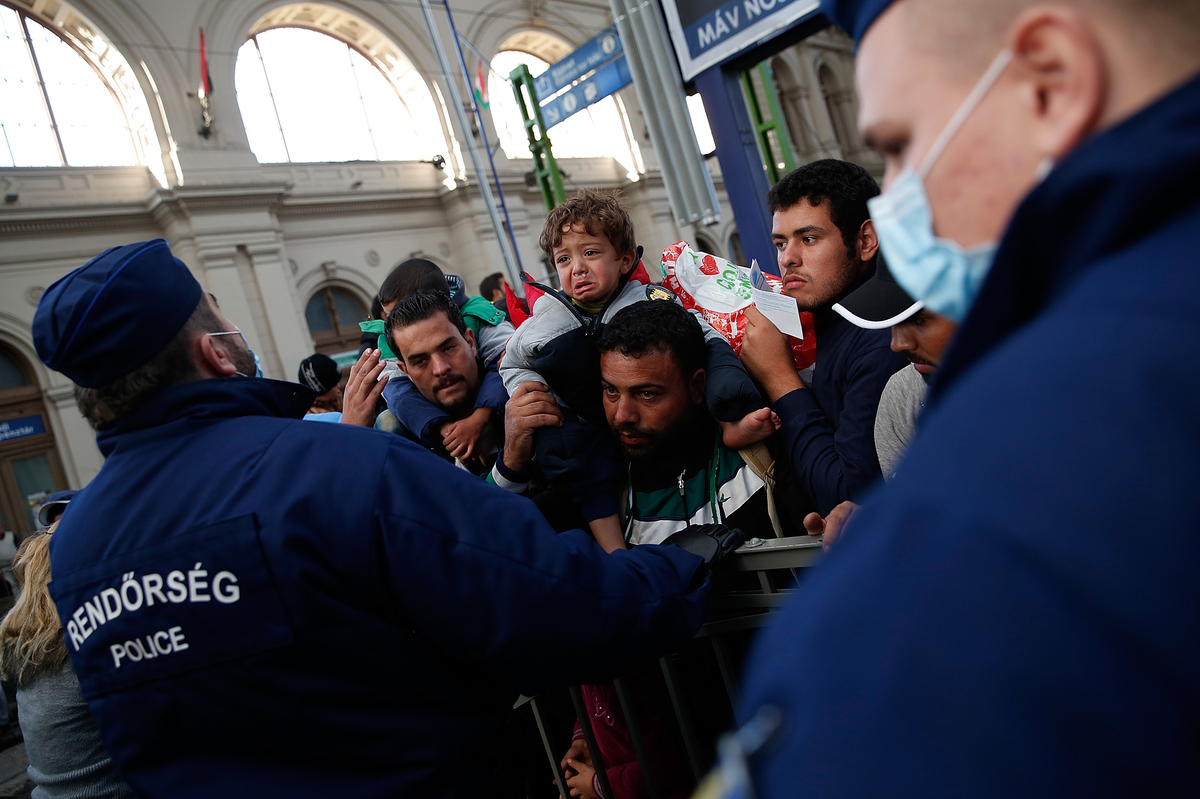 A boy sits on his father's shoulders, part of a crowd of migrants waiting to board a train leaving for the Austrian border at the Keleti railway station in Budapest.

As Middle Eastern migrants make their way through Budapest's Keleti train station, they are often greeted — and treated — by doctors with roots in the very region the migrants have just fled.

One of those greeters is Kaveh Chamsai, a bearded doctor of Iranian origin who recently graduated from Budapest's renowned Semmelweis University medical school, where about a third of the students come from abroad. After graduation, its doctors fan out across the world, with many returning to their countries of origin to practice medicine there.

But now, many of them are back in the city of their alma mater to help refugees. They've set up an aid station at Budapest's Keleti railway station, where tens of thousands of migrants have arrived in the past week. Some are able to buy train tickets west toward Austria, but others end up camping at the station for days, waiting.

"We're doing what we have to do. We're just making sure that people who have unfortunately been put in tough circumstances get a better quality of life," says Chamsai, who graduated from medical school in the spring and moved to Stockholm to practice medicine.

Chamsai is Swedish. But he realizes that many of the migrants passing through Budapest are on journeys similar the the one his parents made decades ago, when they left their native Iran and immigrated to Sweden. 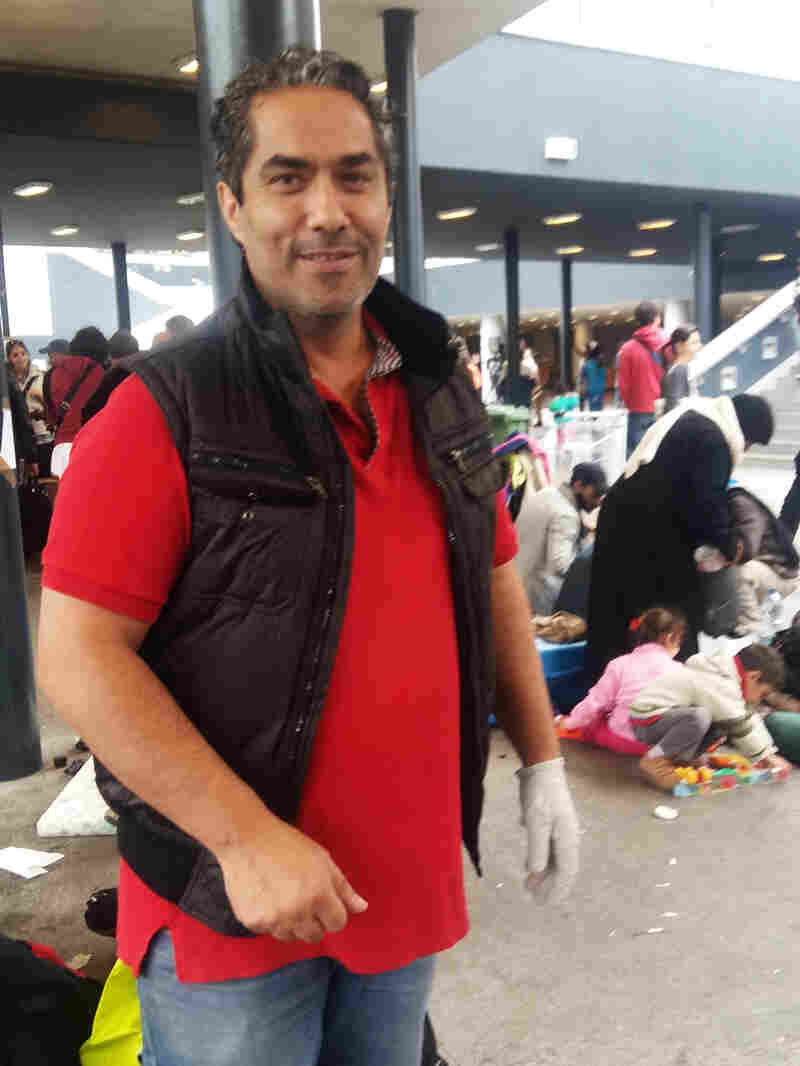 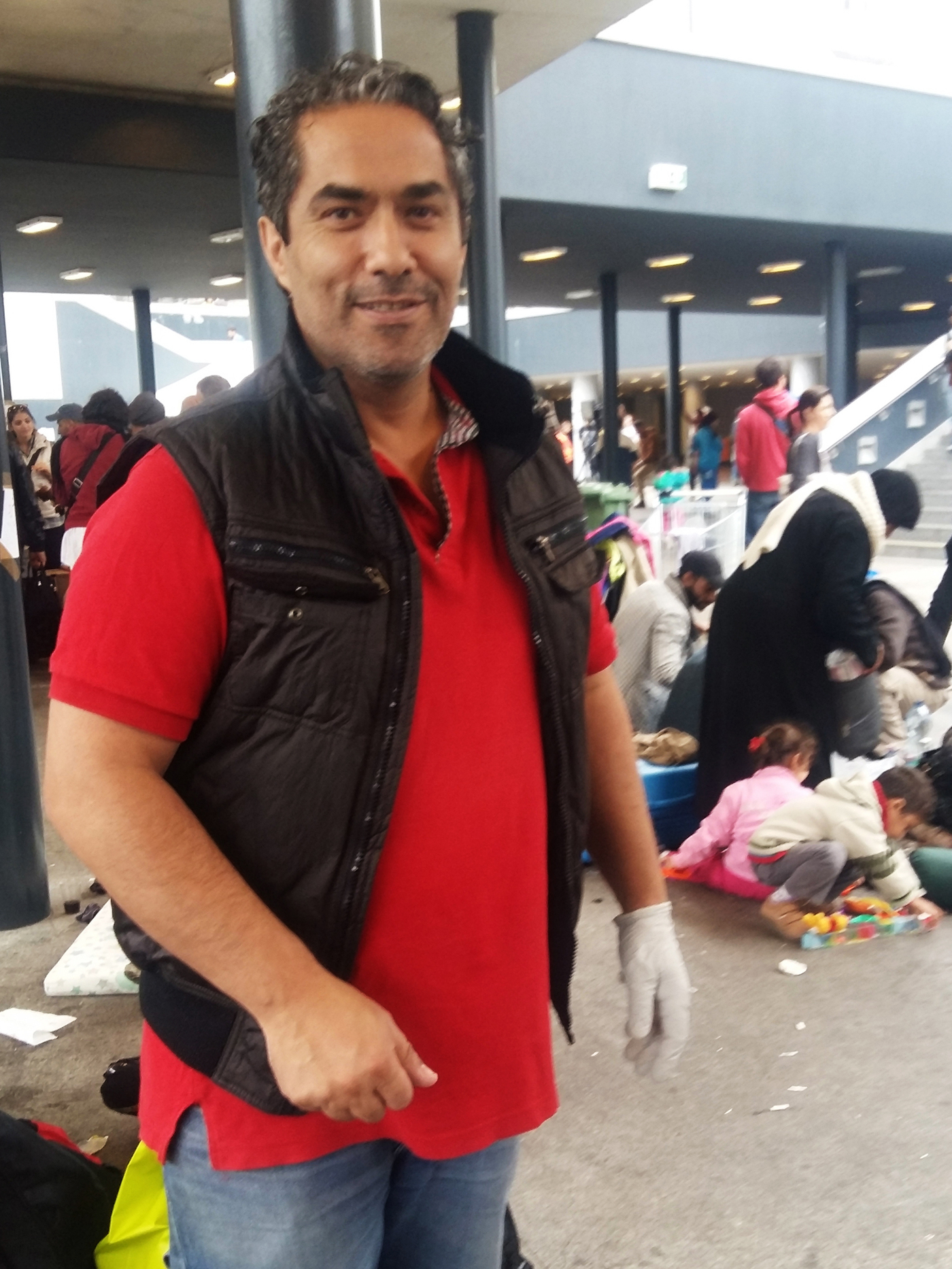 "No matter the politics, and no matter what is going to happen in the future, the truth in the situation is that there's a lot of people in need and a lot of people who need help," he says.

Chamsai paid his own way to Budapest from Sweden and brought nearly $20,000 in donations from friends there. He's one of many current and former medical students — of all religions — who've gathered at Budapest's Keleti station, treating people for dehydration, exhaustion, even helping to deliver babies.

"We just carried out another pregnant woman, in labor!" says fellow volunteer Yousef El-Hindi, a neurosurgeon who's originally from Jordan and moved to Hungary for med school. "The ambulance just took her to the hospital."

At least three babies have been born in a makeshift migrant encampment at Keleti in the past month, he says. Inside the doctors' aid station, they keep a framed photo of the first baby born here, shown swaddled in blankets.

When the migrants come through, "I think they're happy to see a familiar Arab face — and even happier when they hear me open my mouth," says El-Hindi, a native Arabic speaker. He says the migrants often hug him when they realize he speaks their language. 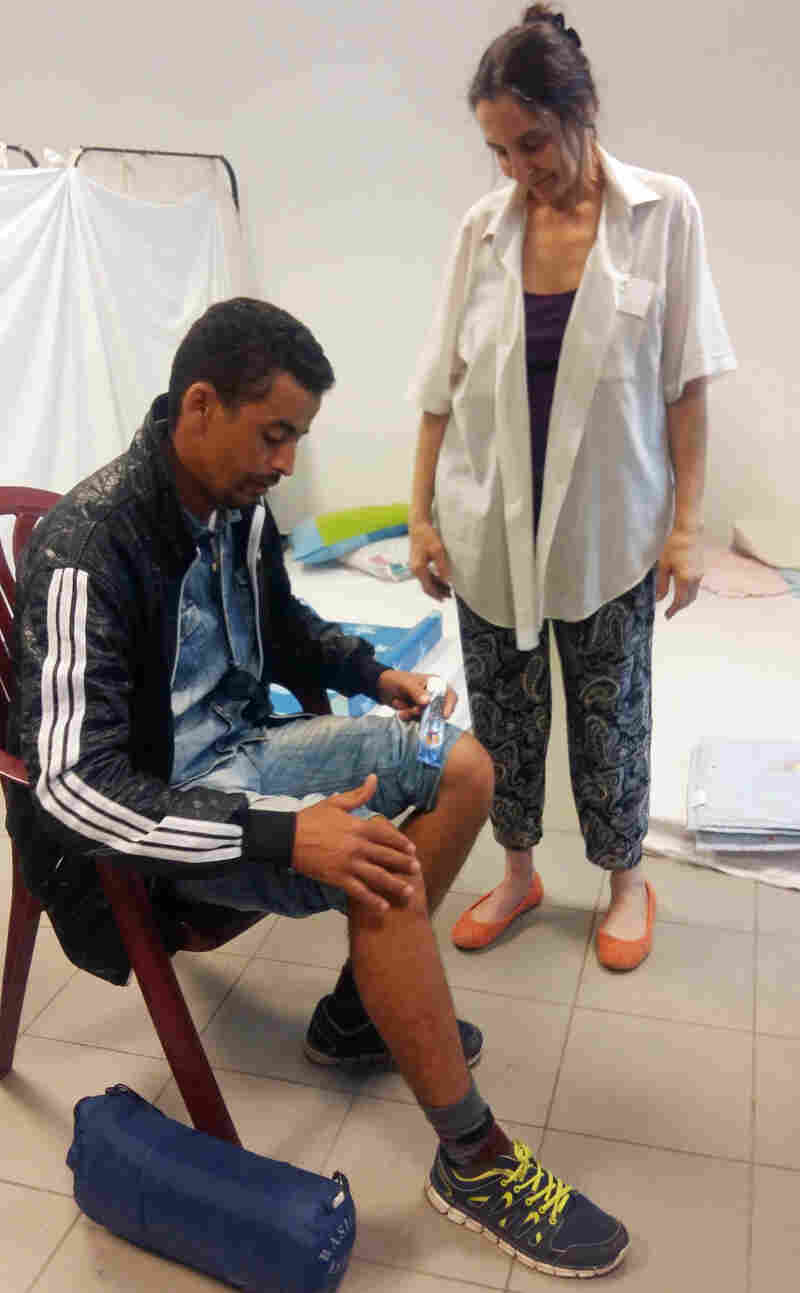 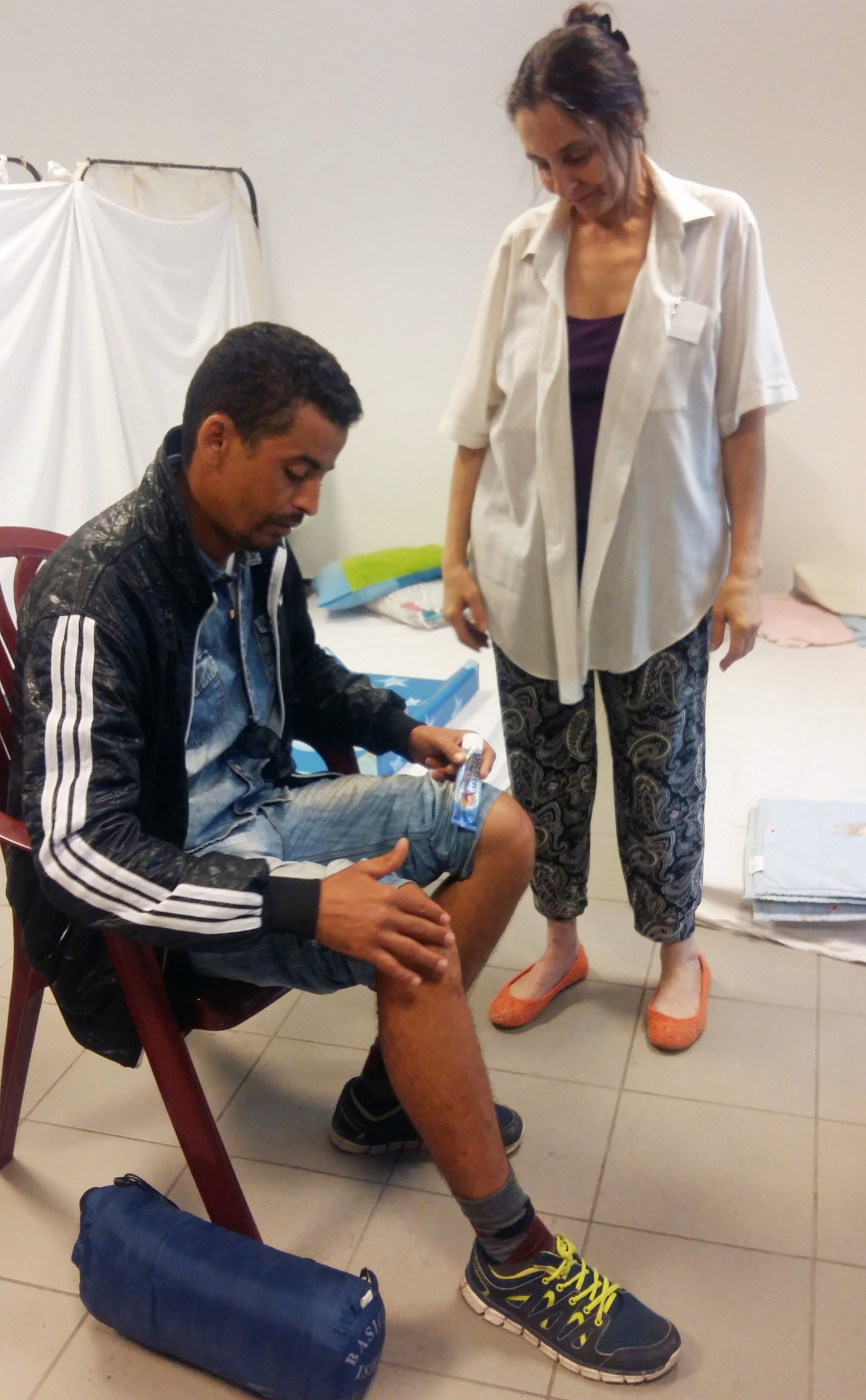 Hungarian authorities have come under criticism for their treatment of migrants. Hungary says it's enforcing European Union law, which requires asylum seekers to register in the first EU country they enter. But with tens of thousands of migrants pouring into Hungary over the Serbian border, many have been locked up in detention camps for days, while overworked Hungarian police struggle to fingerprint them all.

Another complaint has been a lack of interpreters. Hungarian police generally have English translators, but they don't have many Arabic or Farsi speakers. So volunteers have jumped in to remedy that.

El-Hindi is able to communicate in Arabic with migrants and refugees from Syria, Iraq, Lebanon and Egypt. Chamsai, with his Farsi skills, can speak with the Iranians and Dari-speaking Afghans. Another volunteer, Selma Yamaan, is from Turkey and attends to Turkish-speaking migrants, as well as Muslim women who prefer to be treated by a fellow woman.

In addition to providing medical care, the doctors are handing out blankets, sanitary items and food.

"People are coming and just donating some food or some juice. They even bring their food left after they eat in the evening," Yamaan explains, as a Hungarian civilian unpacks five cartoons of orange juice from his backpack. "So everyone is helping."