Accessibility links
With Home-Cooked Meals, France Warms To Mideast Migrants : Parallels Attitudes in France toward migrants have softened recently, and many of the new arrivals say accommodations have been better than expected. Still, the adjustment to a new country will be a challenge. 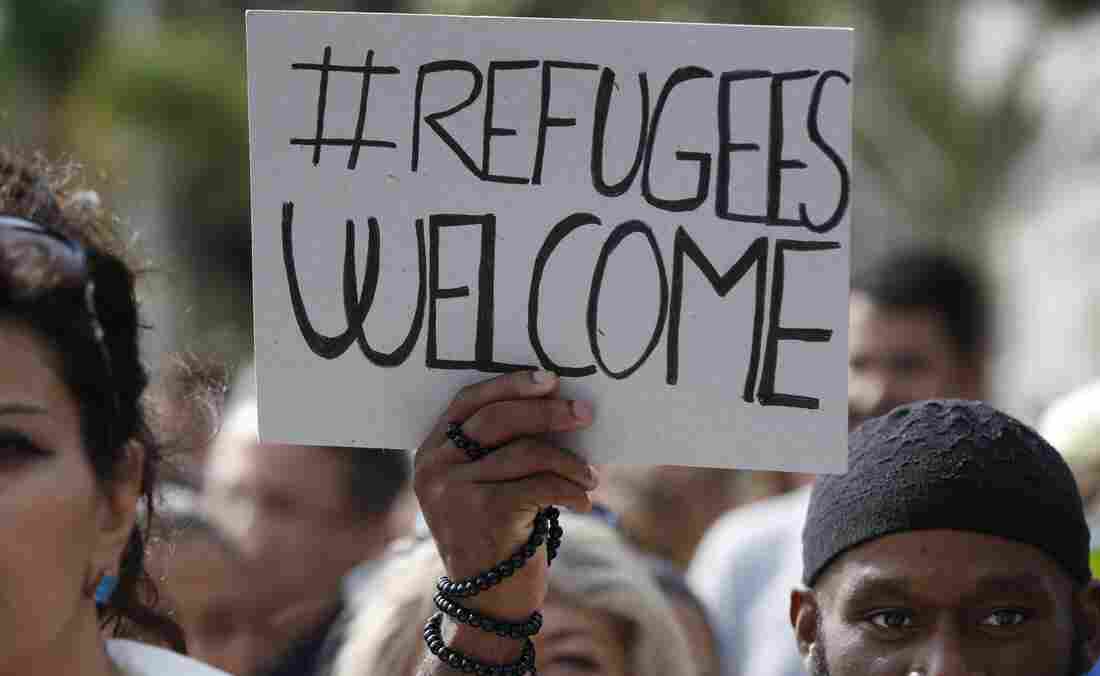 People take part in a march Saturday in support of migrants as part of the European Day of Action in Nice, in southeastern France. Valery Hache /AFP/Getty Images hide caption 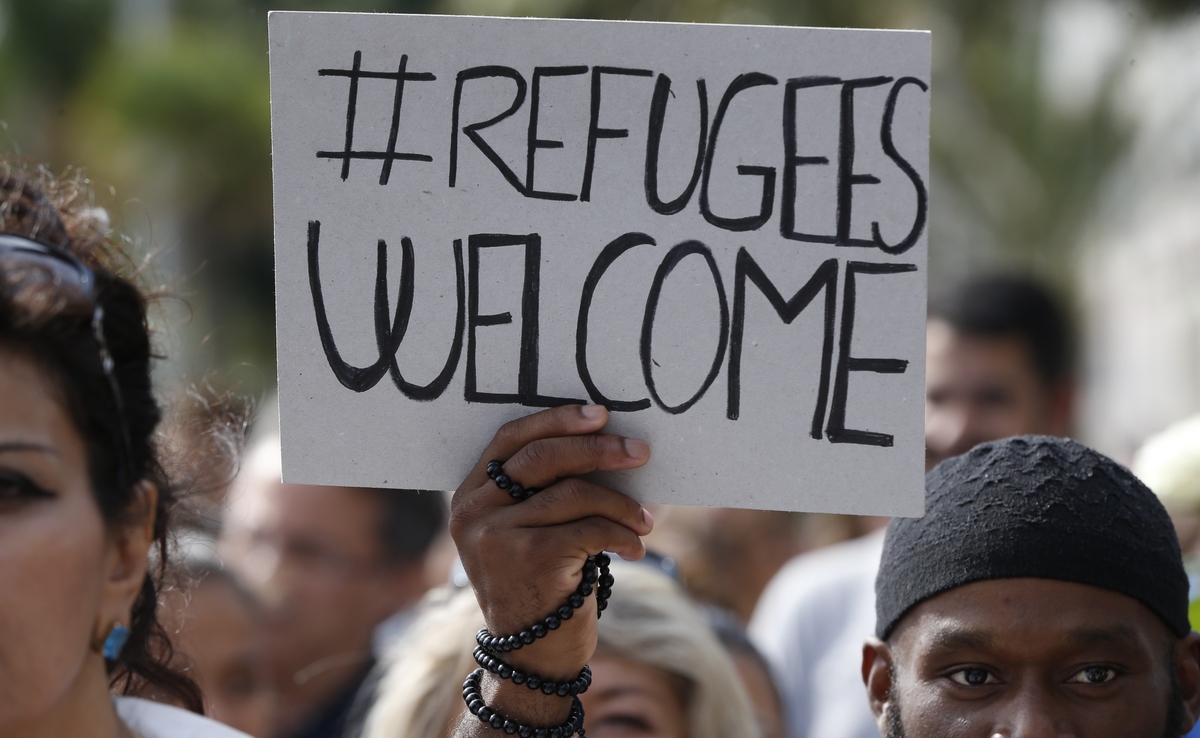 People take part in a march Saturday in support of migrants as part of the European Day of Action in Nice, in southeastern France.

Several dozen migrants, including mothers holding babies, relax in the sun at outdoor picnic tables at a retreat facility near the town of Cergy-Pontoise. The vacation center, about an hour north of Paris in a bucolic lake setting, usually hosts school groups or corporate workers. But for the next few months it will be home to about 200 people who have fled war in Syria and Iraq.

Omram Qassar is one of them. His parents pushed the 23-year-old and his younger brother to leave Syria before they were conscripted into President Bashar Assad's army. Qassar says French officials approached him as he arrived at a refugee camp in Munich and convinced him to change destinations.

"They told me I could get a resident permit in about two months and a permanent resident card shortly after," says Qassar. "The head of the French refugee office himself convinced me to come to France."

President Francois Hollande pledged to take in an additional 24,000 refugees over the next two years. Hollande said taking them in was France's duty. He said the right to asylum was part of the French soul, and that generations have sought asylum in France and helped make the country what it is today. 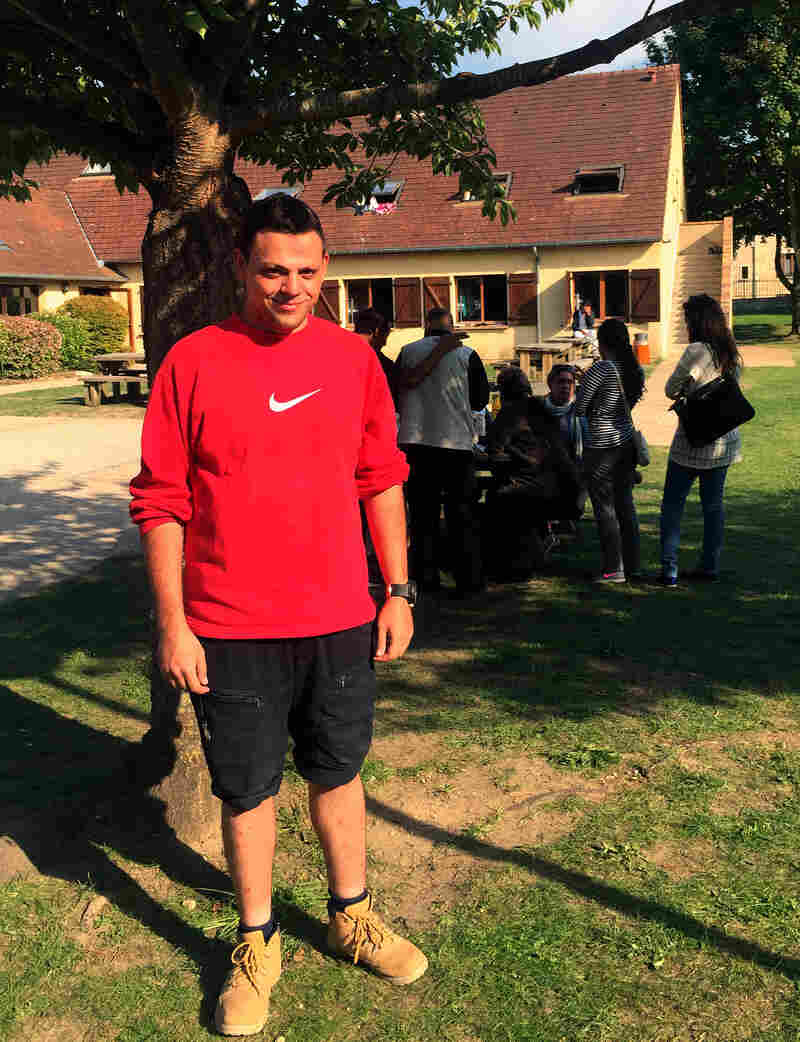 Omram Qassar, 23, and his younger brother left Syria at the request of their parents. After reaching Germany, they were urged to go to France, where he says the accomodations are much better than he expected. Eleanor Beardsley/NPR hide caption 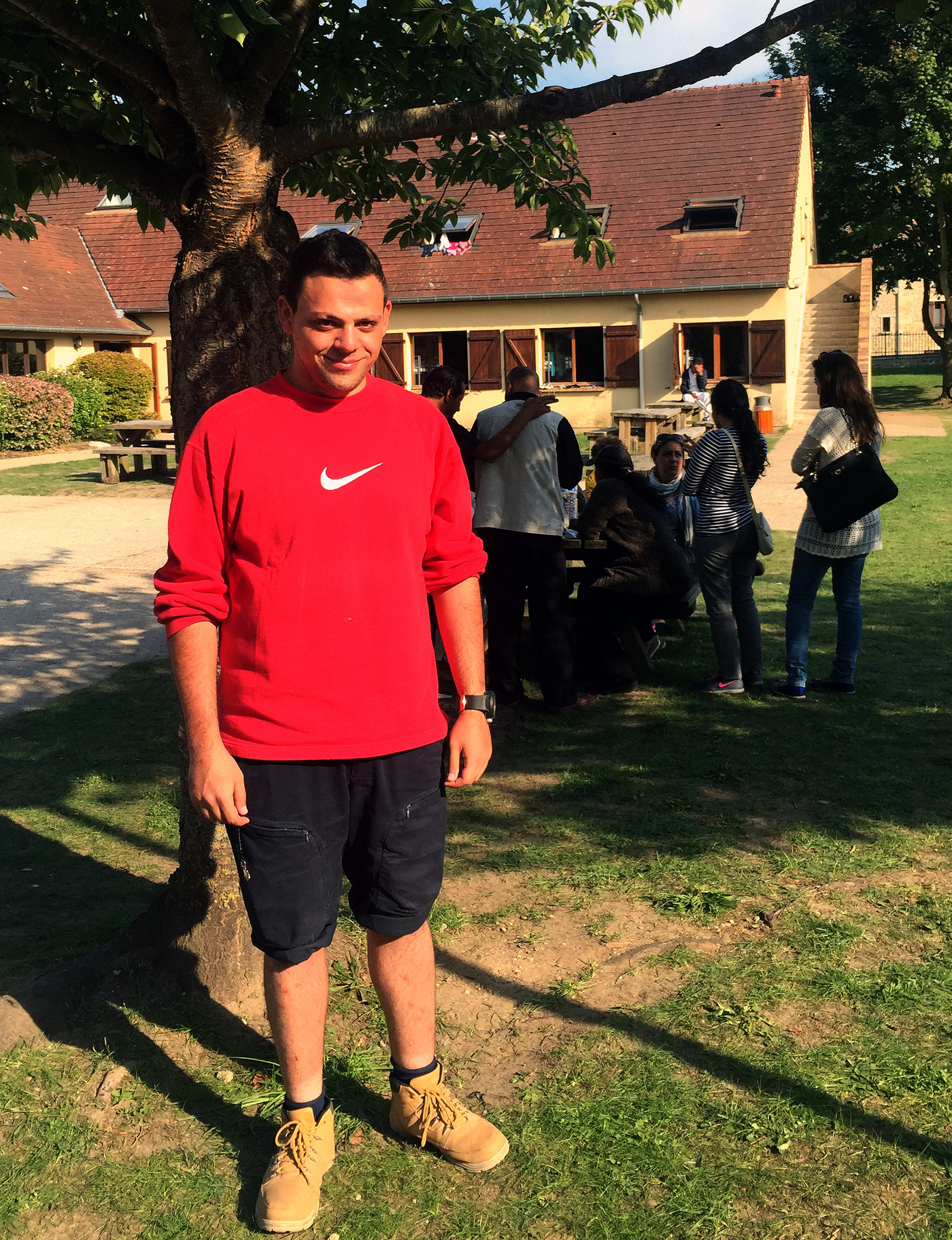 Omram Qassar, 23, and his younger brother left Syria at the request of their parents. After reaching Germany, they were urged to go to France, where he says the accomodations are much better than he expected.

Qassar says he hadn't necessarily been thinking of coming to France. He heard the country has 6 million unemployed, and says that among the traveling migrants, asylum conditions in France are seen as less favorable than places like Sweden or Germany.

But Qassar says there are so many migrants in Germany that he's glad he is now in France, and that the accommodations are better than he expected. The migrants are served three home-cooked meals a day in a cafeteria on the site.

"We've had a huge outpouring among locals, wondering how they can help," says Sylvain Desmets, who runs the vacation center near Cergy-Pontoise. "And next weekend we're planning a giant, community picnic so the migrants' children can meet the local children and play together."

Though far-right figures such as Marine Le Pen have called on France to close its borders, mayors from a dozen French cities have agreed to accept refugees. And an Airbnb-type system connecting migrants with French hosts has been a big success. The warm welcome is somewhat of a turnaround for a country that recently wanted to close its border with Italy and has added more police to control migrants in the northern port city of Calais.

A spirit of solidarity with the migrants seems to be growing in Western Europe. Scenes of Germans welcoming migrants with flowers and cheers impressed the French.

Donia Alkayar and a friend volunteered to serve as interpreters for the new migrants. Alkayar and her family arrived in France from Iraq seven years ago. Now 21 years old, she says life is good, but it's never really like home. In Iraq, her father was a university math professor; in France, he drives a taxi. She says the new emigrants will find their way too, but she'll tell them it's going to take time.

"It's very difficult because it's not the same civilization, or the same traditions," she says.

Qassar says his parents are overjoyed that he and his brother made it to Europe, but they were surprised the boys ended up in France. Equipped with a bachelor's degree in economics, Qassar says he's anxious to get started in his new life and "merge into French society," he says.

Of course he knows he'll first have to learn French. The government is giving the migrants French classes, and Qassar reckons he can get a handle on the language in four to five months. Then, he says, he'll be "as productive as any French citizen."