Accessibility links
Cairo Restores The Eclectic Glory Beneath Decades Of City Dust : Parallels Grime and gaudy shop signs obscure much of downtown Cairo's ornate and varied architecture. The city is undergoing a major wash to uncover that beauty, but at the cost of some residents' livelihoods. 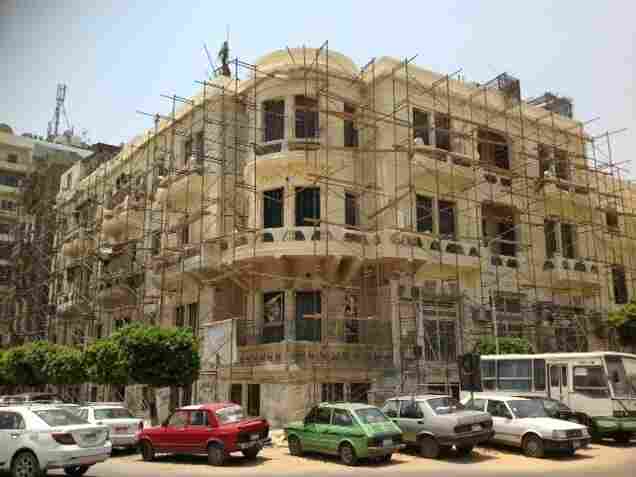 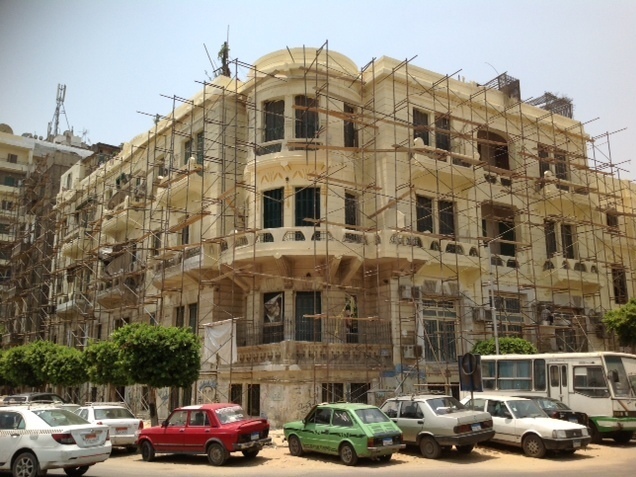 Cairo's ornate buildings, a mix of 19th century European and Middle Eastern architecture, are often lost in layers of dust and tacky storefronts.

Architecture professor Soheir Zaki Hawas has dedicated her life to documenting the beautiful historic buildings in downtown Cairo and to trying to preserve them.

"Heritage is the memory of a city," Hawas says. "If I lose my memory for five minutes, I will not be able to introduce myself to tell you anything about anything."

She pulls her book off the coffee table in her living room; it took her years to document the buildings in downtown Cairo.

"I want to show you this page here," she says, flipping through the book. "This is a beautiful catalogue."

There are renderings of ornate wooden doors, beautiful columns, archways and intricate balconies.

But most of that architecture is lost in downtown Cairo behind the layers of dust, gridlocked traffic, street vendors and the gaudy modern colors and neon signs that shop owners' use to jazz up their storefronts.

Hawas says all that is changing now. A renovation project that's costing the city hundreds of thousands of dollars aims to restore downtown's past glory. Hawas is a consultant on the project, which started last year, and the local Cairo government is working with businesses as well. 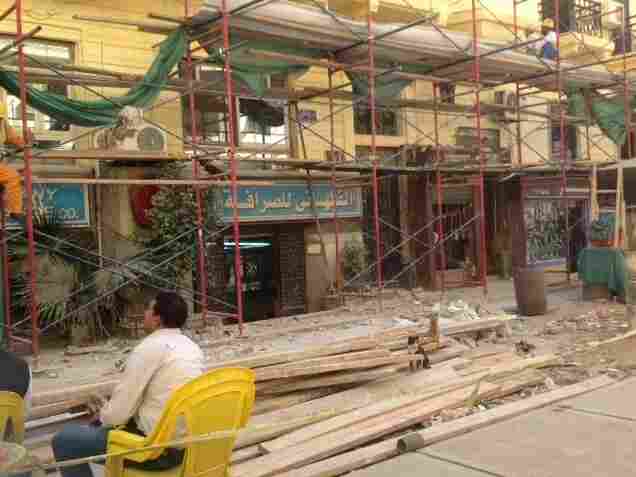 Cairo street vendors and Nile boat drivers say they are being displaced by the project to showcase the city's architecture. Soheir Zaki Hawas hide caption 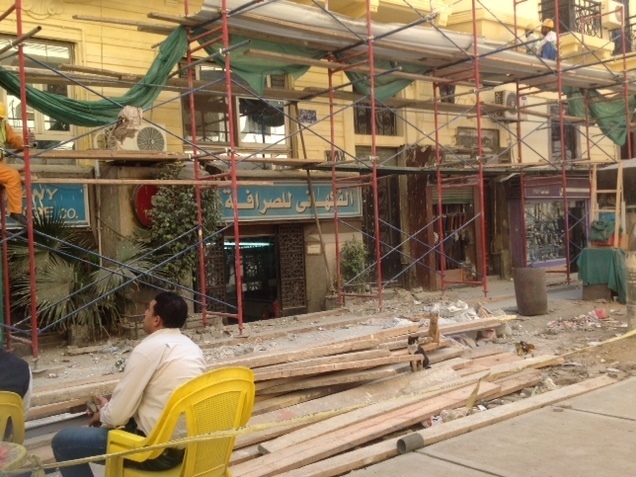 Cairo street vendors and Nile boat drivers say they are being displaced by the project to showcase the city's architecture.

The point, she says, is to showcase the many buildings and their eclectic styles.

"You have the Renaissance, you have the baroque style, you have the art nouveau, and art deco, the Roman classical style too, and the expressionist style," she says, listing the city's many architectural treasures.

Her father, famed Egyptian architect Zaki Hawas, once said Cairo is a glamorous city, it only needs a face wash. Soheir Hawas is trying to give it one.

Modern downtown Cairo was built in the 19th century and is known as Khedivial Cairo, named after a local ruler, Khedive Ismail, who commissioned what is downtown Cairo today. European architects, mostly from Italy and France, designed many of the buildings.

To restore that past glory, the city has had to convince shop owners to get on board.

"It was a very good experience because we started for the first time to have talks with people in their places," says Riham Arram, who is in charge of heritage preservation at the Cairo governorate.

Arram says they slowly convinced shop owners to voluntarily change their stores to match downtown's aesthetic. A parking lot was built near Tahrir Square to stop cars from parking on the sides of the roads, and vendors who sold their wares in the middle of the streets in already-crowded downtown Cairo were relocated before renovations began.

"It was important to make them feel responsible of what has been done," says.

That's especially important now, when heritage is being lost all over the region through conflict and neglect, Arram says. She wants Egyptians to feel proud and cherish their history.

"People need to have confidence in their country, to know that their country is strong, and it could be like the time when it was the head of the Arab world," she says. 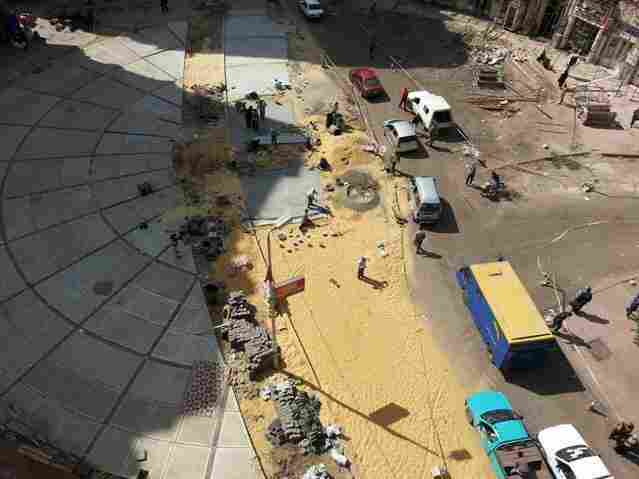 Vendors who sold their wares in the middle of the streets in already-crowded downtown Cairo were relocated to make way for renovations. Courtesy Sohair Zaki Hawas hide caption 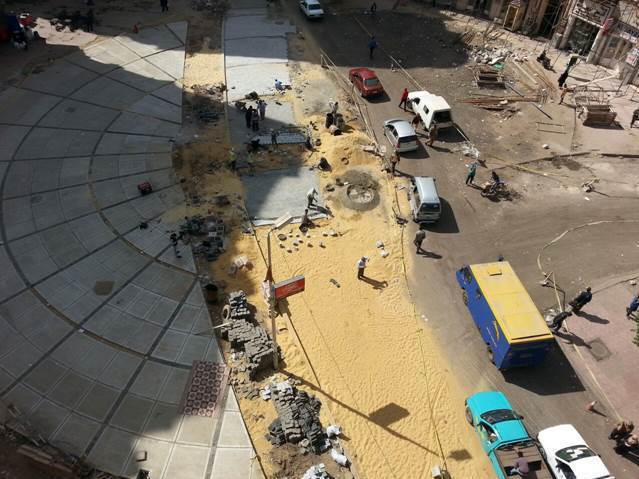 Vendors who sold their wares in the middle of the streets in already-crowded downtown Cairo were relocated to make way for renovations.

On Alfi Street in downtown Cairo, the buildings have fresh coats of paint, the local fast food restaurant has changed it's facade to match the sandstone colors of the buildings around it, and people are sitting outside listening to music in relative peace.

But coffee shop owner Zakaria Shouri says much of the change is superficial.

"It's nice," Shouri says, "We like that it's clean." But he pays a few hundred dollars a month to the city in upkeep, and it's hard to afford. And if you look just beyond the facade and into the buildings, Shoura says, everything is falling apart.

Others have bigger problems with the project.

Cairo plans to develop the Nile into a pedestrian-only promenade, where people can enjoy the view. To do that, police forced out from downtown dozens of men who sail tourist boats on the Nile. The local government says it relocated them to another area where they can work, but the sailors say that's not true.

Mohamed Sayed shows us his rickety boats, docked under a bridge off the island of Zamalek. He says the police forced them to move, beating and threatening him and his employees — mostly other family members — even though they are licensed to work. Now he's stuck here, where no tourists can come to take his boats into the Nile.

Sayed has been doing this work for 50 years. It's a family business and now he has nothing — nor do the 50 other families who depend on his family's 13 boats for survival.

How will he survive?

"We're going to sell the children," he jokes.

But he has a serious point.

"This is how you make street children," he says, "by eliminating their family's employment."

He blames everyone from the local government up to the president for his desperation. He asks: Why do they have to hurt the poor to make a better downtown?