Accessibility links
Gulf States Fend Off Criticism About Doing Little For Syrian Refugees : Parallels As domestic and international criticism mounts, Saudi Arabia and its peers are under pressure to review their policies toward migrants and refugees. They say they're already doing a lot to help. 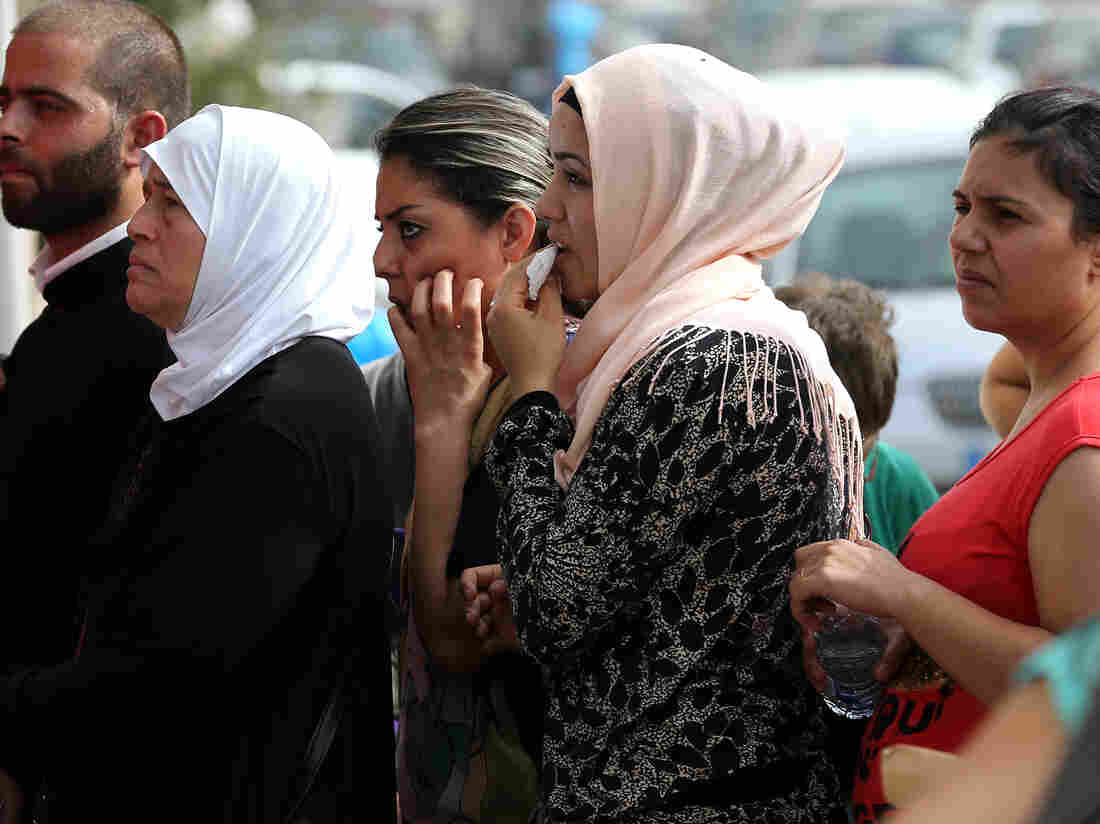 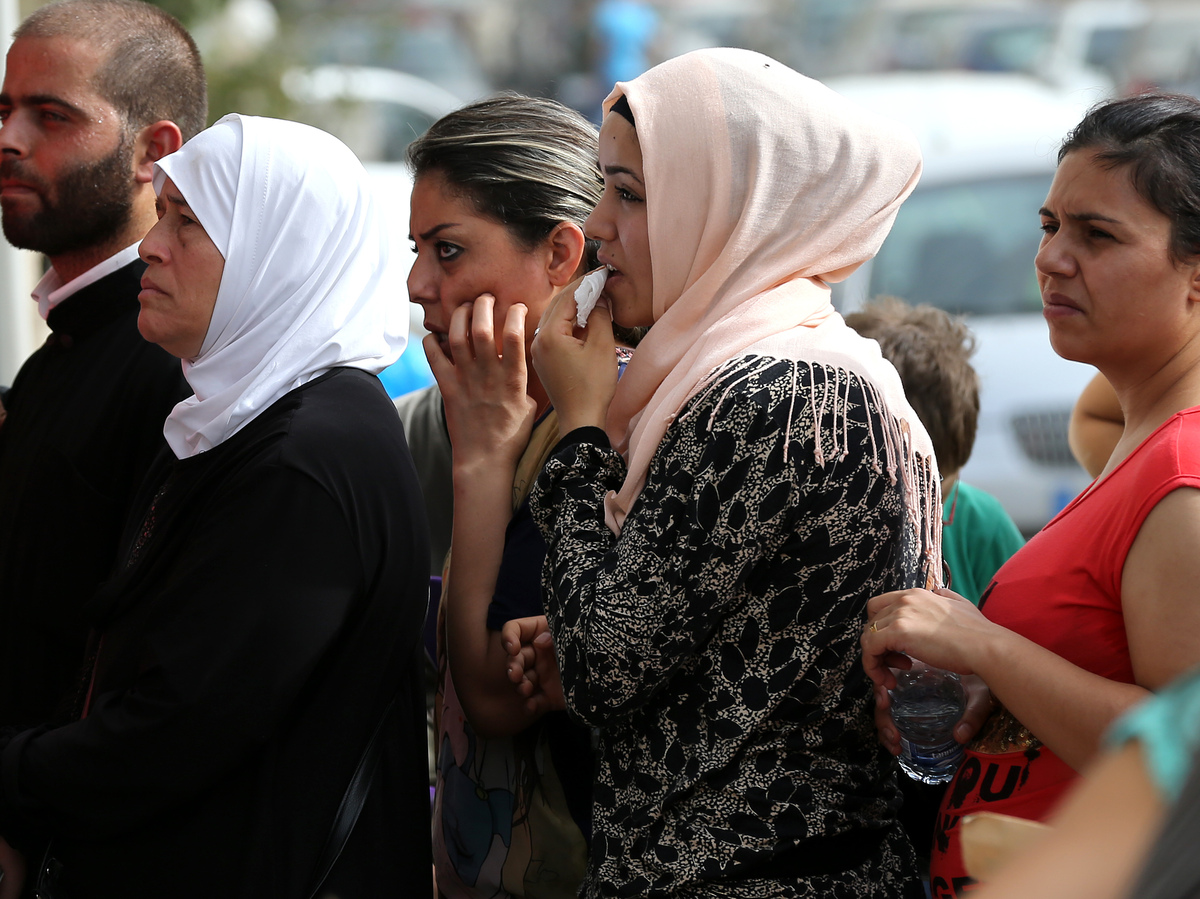 Syrian citizens line up to apply for visas outside the German embassy in Beirut. Lebanon hosts more than 1 million Syrian refugees.

Syria doesn't have a history of free and open elections, but in the past few weeks Syrians have been voting with their feet. After four years of brutal civil war, Syrians are registering a sense of hopelessness and are willing to risk dangerous journeys for a chance to start over again in Europe.

As the numbers mount, with Europe overwhelmed, the blame game has begun. Why don't the richest Gulf Arab states — the diplomatic and financial sponsors of Syria's rebel groups — resettle these desperate refugees?

Even Gulf Arab citizens are raising the question: #ShameOnArabRulers is trending on Middle Eastern Twitter accounts.

"Why don't you let them in, you discourteous people?" was the punchline of a cartoon in a Saudi newspaper.

Gulf officials are on the defensive and have been forced to address the issue publicly. "We see criticism that does not correspond to the reality,"Anwar Gargash, the foreign minister of the United Arab Emirates, said at a recent Arab League meeting.

The Saudi Foreign Ministry challenged the charges by issuing official numbers that are impossible to verify independently, saying "the Kingdom has received around 2.5 million Syrians since the beginning of the conflict." A Saudi scholar told the BBC that thousands of Syrians receive free health care and education in Saudi Arabia.

An op-ed in the New York Times by Yousef al-Otaiba, the UAE's ambassador in Washington, contested the widely reported statistic of "zero" refugees in the Gulf. "Since the beginning of the Syrian crisis, the U.A.E. has welcomed more than 100,000 Syrians, joining 140,000 already residing in the emirates," he wrote. "The Emirates' per capita commitment to the Syrian crisis exceeds virtually every other country's participation."

While it's true that the Gulf States have allowed thousands of Syrians to come on work visas, many Syrians say they face severe restrictions in these countries. Some have decided they would rather risk the difficult road to Europe.

"I will live here for five years, ten years, and then what?" says Dahlia, a Syrian who fled her home in Aleppo and joined relatives in the Gulf city-state of Dubai. "You never belong, you never feel you are safe, your residency can be canceled at any time and then what? Go where?"

Citizenship is not an option, even for workers who stay for decades.

Dahlia didn't want her last name published because the subject is "political" and she quickly learned after she arrived that political discussions are not tolerated in the Gulf.

Her relatives were alarmed when she wore a bracelet that showed her support for the Syrian revolt. "Remove it, you can't walk in the streets, it will give you problems," they advised her.

The deal is clear, she says: You can work, but you must leave your politics at home.

Officials in the Gulf are afraid the Syrian refugees "will bring their fight with them," says Randa Slim at the Middle East Institute. For the UAE, "given its neighborhood, can't afford to do this."

The Gulf states have donated millions of dollars to support Syrian refugees in Jordan, Lebanon and Turkey, and defend their commitment to supporting the victims of Syria's war. But the reality is more complicated, says Slim.

"It's very sensitive," says Slim, describing official reactions in the Gulf. The countries' aggressive push-back against criticism is intended for an internal audience, she says.

In the Gulf region, "Everybody listens to CNN and reads Twitter," says Slim, and Gulf officials have to convince the so-called Arab street that they're not being negligent. "It's about their domestic audience — that 'we, as Muslims, are taking care.' "

Arab satellite channels have run nonstop coverage of the Syrian conflict and exhausted refugees making the difficult trek across Europe. But a recent photograph of well-constructed, air-conditioned tents for religious pilgrims in Saudi Arabia set off another round of Arab media criticism, asking why the Saudis didn't send the same facilities to Syrians displaced by the war.

It is an emotive issue, says Slim. "Also," she says, "the real fact doesn't speak well on their behalf."

The fact is that Gulf countries don't accept refugees for resettlement because none of their governments officially recognize the legal concept. Even in Jordan, Syrians fleeing the civil war are called "guests," the expectation being that they won't stay.

Arab governments refused to sign the 1951 international convention on refugee rights, says Nadim Shehadi, head of the Fares Center for Eastern Mediterranean Studies at the Fletcher School of Law and Diplomacy. "The convention gives a mandate to UNHCR to do permanent settlement in the host countries or resettlement in third-party states," says Shehadi.

This was unacceptable to Arab governments 60 years ago — and still is today. They oppose resettling Palestinians in other countries, arguing that they should be allowed to return to homes they fled or were forced out of in wars with Israel. From the Arab perspective, the only acceptable option is for Palestinians to return to their old homes, says Shehadi. But Israel says it will never accept large numbers of Palestinians. The net result is that millions of Palestinians still have refugee status after living decades in Lebanon, Syria and elsewhere in the Middle East.

In the recent crisis, thousands of Syrians have resettled in the Gulf States, says Shehadi, but they are on visitor or work visas. "None just walk in without the Gulf states being able to revoke their residence," he says.

For Syrians, the realization is sinking in that going home may not be possible for at least a generation. "Most important for Syrians, it's about the future," says Dahlia as she describes the calculations Syrians now make.

For decades, highly skilled Syrian workers were welcomed to make a good living in the growing economies in the Gulf. They supported extended families and expected to go home.

War has changed the calculus, says Dahlia. The top goal for Syrians is citizenship and a second passport — goals that are not possible to achieve in the Gulf.

"I have friends who postponed the idea of having children until they can get to Germany," Dahlia says.

For Syrians who have good jobs in the Gulf but are torn as relatives post pictures of their arrival in Germany, she says, "There's not one that hasn't considered" migrating to Europe.

As domestic and international criticism mounts, Gulf states are under pressure to review their policies. Social media and newspaper editorials are pressing for the Gulf to open its doors. More work visas could help stem the desperate and dangerous flow to Europe. Boosting humanitarian relief funds could reverse the dramatic drop in food aid to refugee communities in Syria's neighboring states.

But the recent finger-pointing fails to recognize that the Gulf states have provided an important safety net for Syrians, says Joseph Bahout, a visiting scholar at the Carnegie Endowment for International Peace.

"A lot of Syrians in the Gulf are supporting extended families in Europe and elsewhere," he says. "There are 2 to 3 million Syrians making a living in the Gulf."

Many Syrians who found work in Dubai, Riyadh and Doha came there after being rejected via official channels for asylum in Europe. The remittances sent to families inside Syria have actually prevented the crisis from getting worse, he says.

The Gulf could do more, he concedes. "That is beyond debate. But to say they are doing nothing is unfair."

The dramatic media attention focused on the largest movement of humanity in a century — some 60 million total displaced worldwide — has settled into a blame game, says Bahout. "We have been warning that the refugee issue will become a time bomb," he says. Now, the crisis has moved to Europe and a long-term solution is overdue.