Accessibility links
What's Next For Iran? 5 Possible Futures, From Disaster To Hope : Parallels In the wake of the nuclear deal, NPR asked five Iran watchers to sketch out visions of what they think will happen in Iran and the broader Middle East, and in its relations with the West.

Hear NPR's Special, The U.S., The Atom and Iran

What's Next For Iran? 5 Possible Futures, From Disaster To Hope

Hear NPR's Special, The U.S., The Atom and Iran 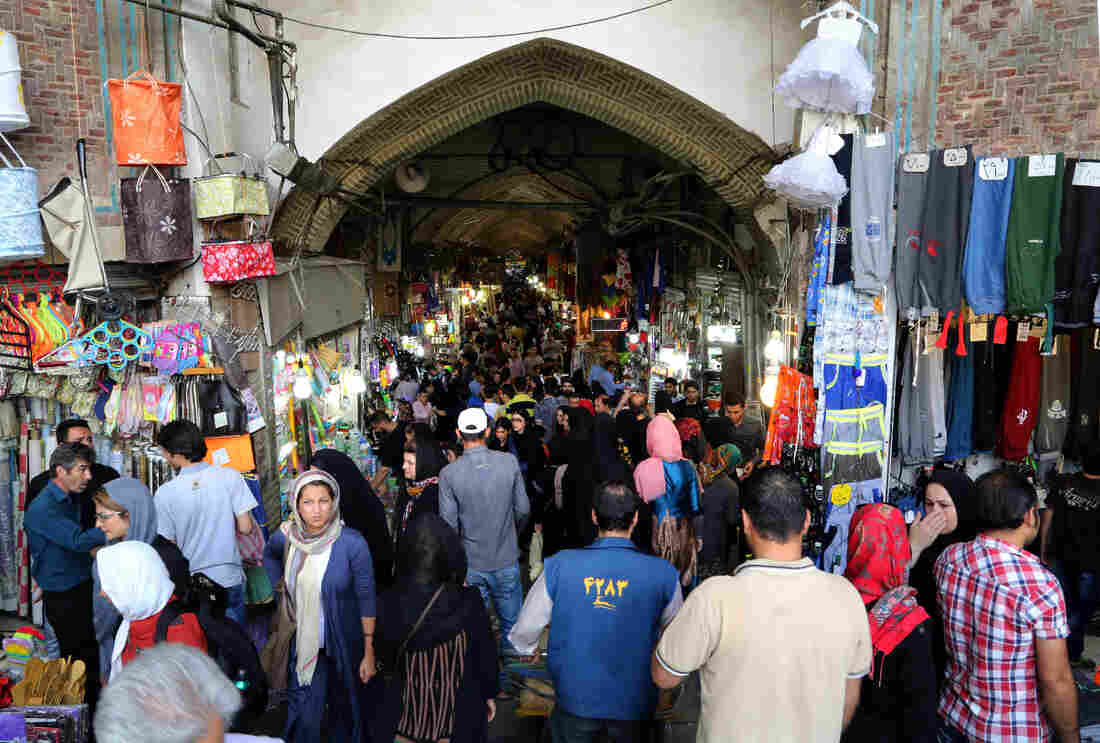 Iranians shop at the main bazaar in the capital, Tehran, on Sept. 16. Many Iranians have high expectations that their economic conditions will improve following the nuclear deal, which will lift some of the toughest sanctions against the country. But some analysts think the economic boost will be limited at best. Atta Kenare/AFP/Getty Images hide caption 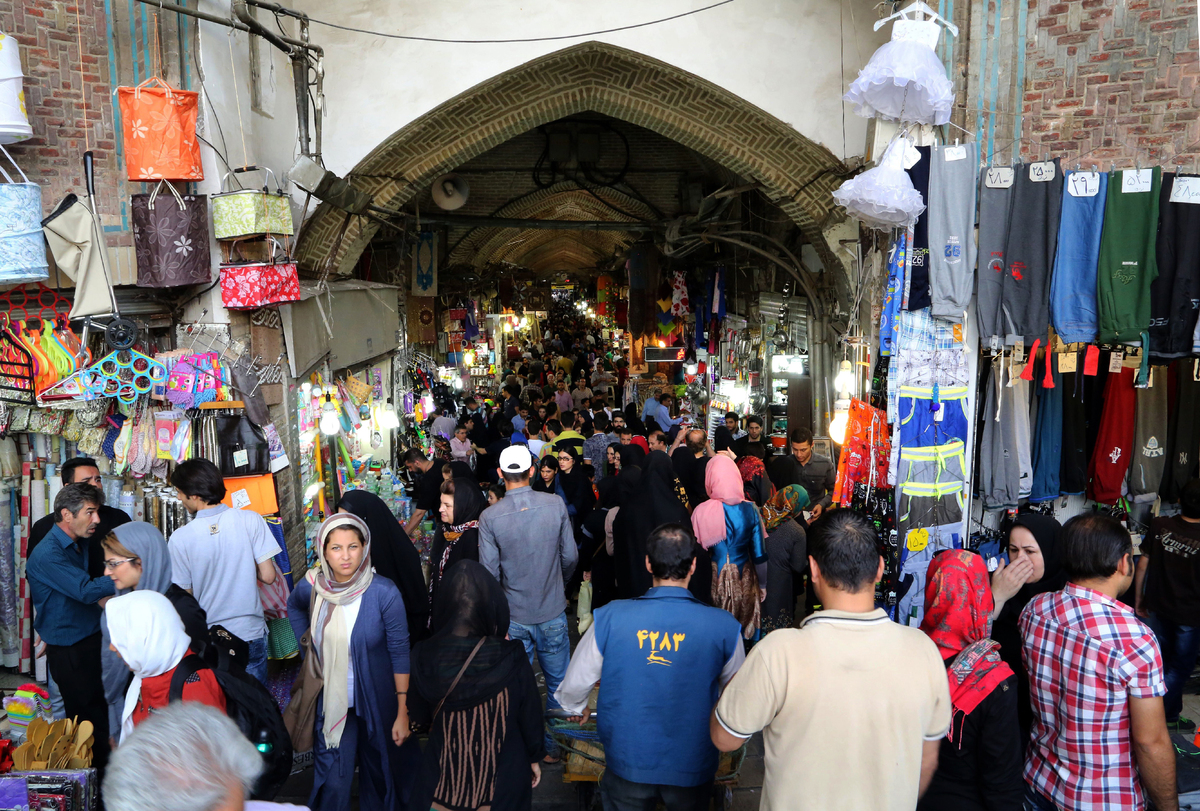 Iranians shop at the main bazaar in the capital, Tehran, on Sept. 16. Many Iranians have high expectations that their economic conditions will improve following the nuclear deal, which will lift some of the toughest sanctions against the country. But some analysts think the economic boost will be limited at best.

Is the Iranian nuclear deal just a nuclear deal? Is it something bigger that will transform Iran and the broader Middle East?

Or is it a slow-motion nightmare?

Nobody can know today, of course — and yet it's important to game out the possibilities. What you think of this deal, with terms lasting a decade or more, depends heavily on what scenarios you think are most likely in the future.

President Obama has offered an optimistic scenario: Iran never gets the bomb and seizes an opportunity to end its isolation.

As part of an NPR News special on the Iranian nuclear deal, we asked five specialists on Iran where the country might be headed. Each focused on different parts of a complicated equation. Each is presented here only as a plausible scenario.

This one comes from Mehdi Khalaji, a man who called himself a "recovering ayatollah." He's a onetime clerical student in Iran and is now an analyst at the Washington Institute for Near East Policy.

He doesn't think anybody will get what they hope from the deal.

The Iranian leadership has been "given promises that if Iran complies with this deal, many of the sanctions would not be enforced," says Khalaji. "On one hand, that's a good thing for Iran. On the other hand, that's not enough for [foreign] companies and banks to immediately start to work with Iran."

International firms will be reluctant to make big investments because they know the door to Iran could close again.

The Iranian people could be disappointed. The country's political moderates, who supported the deal, could be discredited.

The U.S. may also be disappointed with the deal because of Iran's lack of compliance, which Khalaji thinks will be hard to sustain.

We heard this vision from Karim Sadjadpour, a journalist who now studies Iran at the Carnegie Endowment for International Peace.

"People have had very high expectations for change for many years in Iran," he says. "So the aftermath of the nuclear deal is met with disillusionment. This deal that we have been hoping for — that was supposed to open up the country, which was supposed to remove financial restrictions, to open us up politically [and] socially — disappointed us, didn't meet these expectations. And there is this long period of disillusionment. And frankly, I think this is a period which could be measured in decades, not years."

In this scenario, Iran's clerics will cling to power, resisting change. They will be increasingly discredited.

Someday — maybe many years from now — the system could collapse as the Soviet Union finally did in 1991.

If you're a U.S. policymaker, the Collapse Scenario sounds appealing. But Sadjadpour adds an advisory. 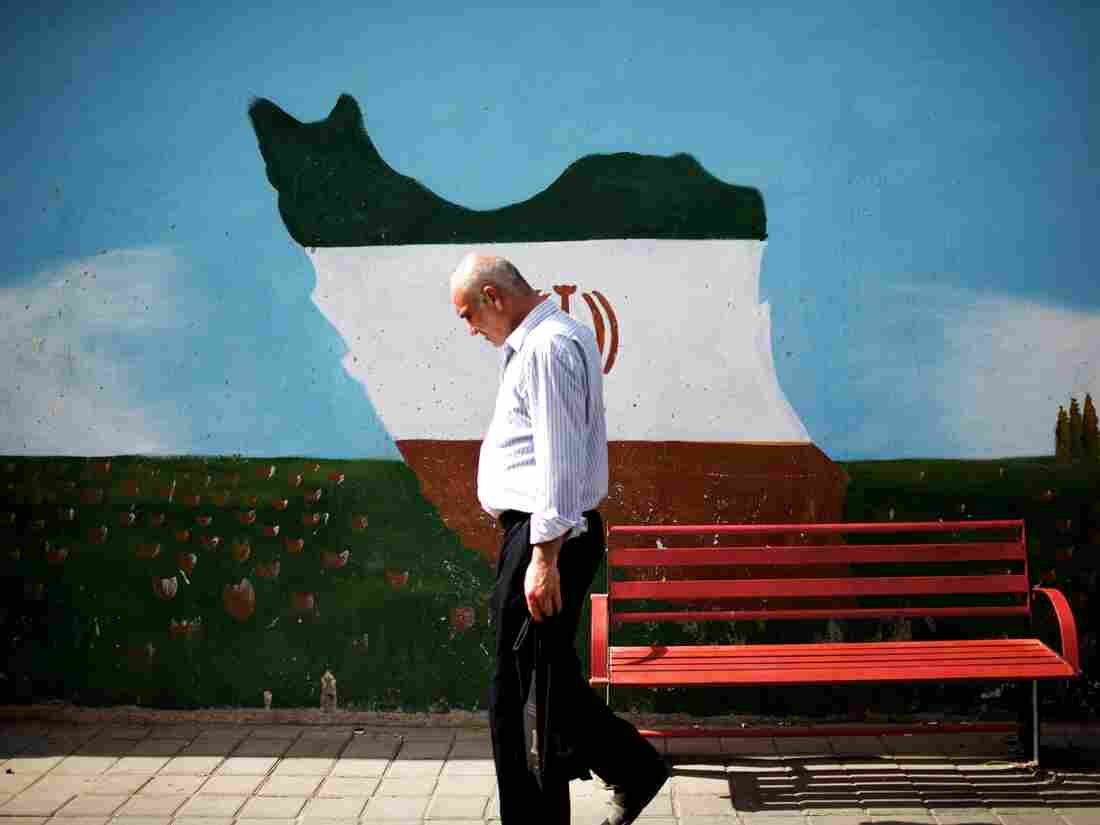 An Iranian man walks past a mural displaying an outline of Iran, adorned in the colors of the country's national flag, on June 29 in Tehran. A large majority of Iranians appears to support the nuclear deal. Bherouz Mehri/AFP/Getty Images hide caption 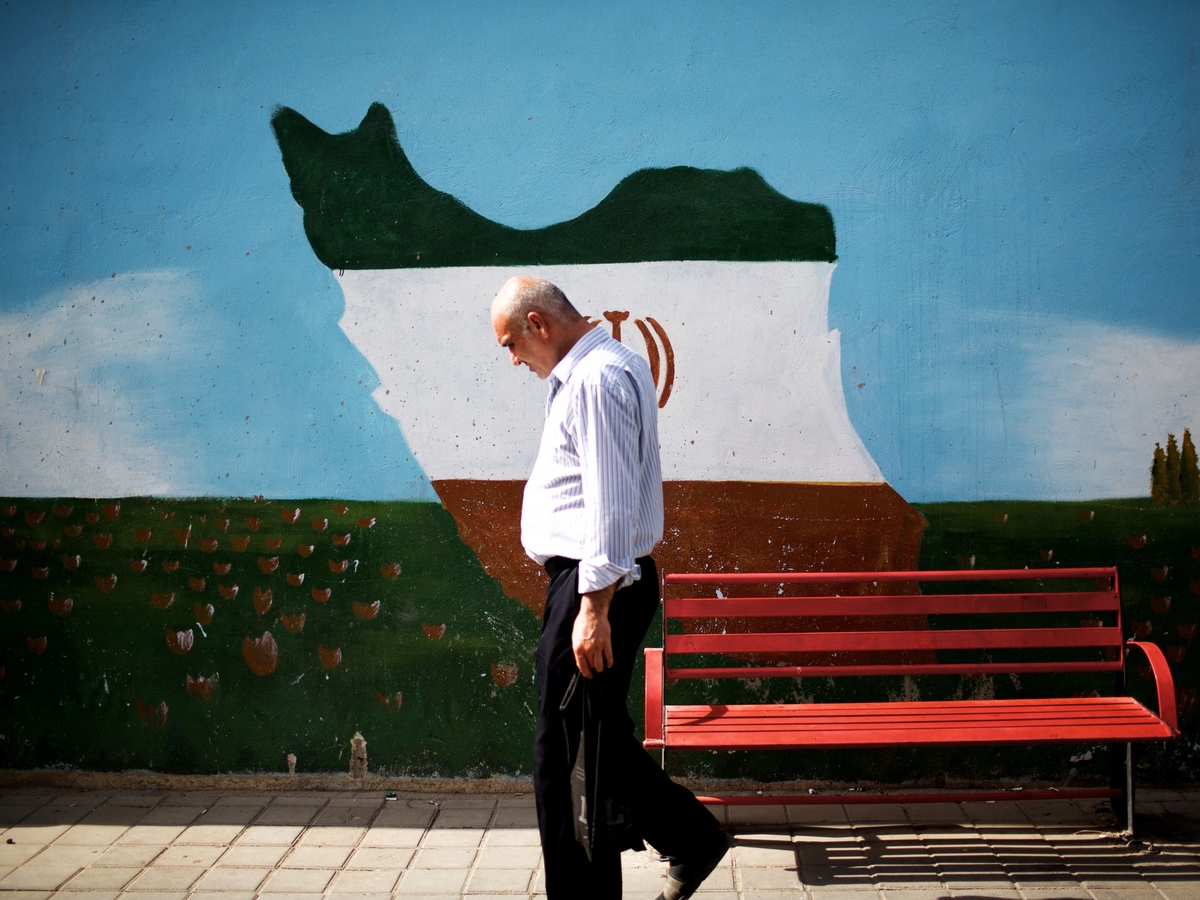 An Iranian man walks past a mural displaying an outline of Iran, adorned in the colors of the country's national flag, on June 29 in Tehran. A large majority of Iranians appears to support the nuclear deal.

Should Iran's revolutionary government collapse, the successor government might prove just as problematic, he suggested. It could resemble post-Soviet Russia, as led by Vladimir Putin.

"When I look at the history of Iran and Russia, its resources, the nationalism of the country, its resentment toward foreign interference, its tremendous pride, I see Iran's future more akin to Russia than I do, say, China, or other countries, perhaps in eastern Europe which have managed to transition to functioning democracies," he added.

A prominent opponent of the deal, Frederick Kagan of the American Enterprise Institute, outlined this vision.

"The Iranian interest is to continue the deal for as long as possible, as long as, they're not actually being interfered with in ways that they find unpleasant," Kagan says.

But he expects the situation will become unpleasant: The deal calls for the U.S. to lift economic sanctions linked to Iran's nuclear program, but the U.S. also has vowed to continue sanctions on non-nuclear issues, such as state support of terrorism.

Kagan doesn't think that will work.

"We are going to want to sanction them, for a variety of a malign activities, including killing our allies and possibly Americans," he says. "And every time we do that, the Iranians are going to threaten to walk away from the deal. And so we're going to be engaged in this constant deal-brinksmanship over, 'Is it worth it to us to run the risk to impose the sanctions, and the Iranians might walk away? And what will it mean if the Iranians walk away?' "

If they do walk away and resume banned nuclear activities, the U.S. could restore sanctions or even threaten war — but Kagan contends that will be impossible. President Obama sold the deal as an alternative to war. 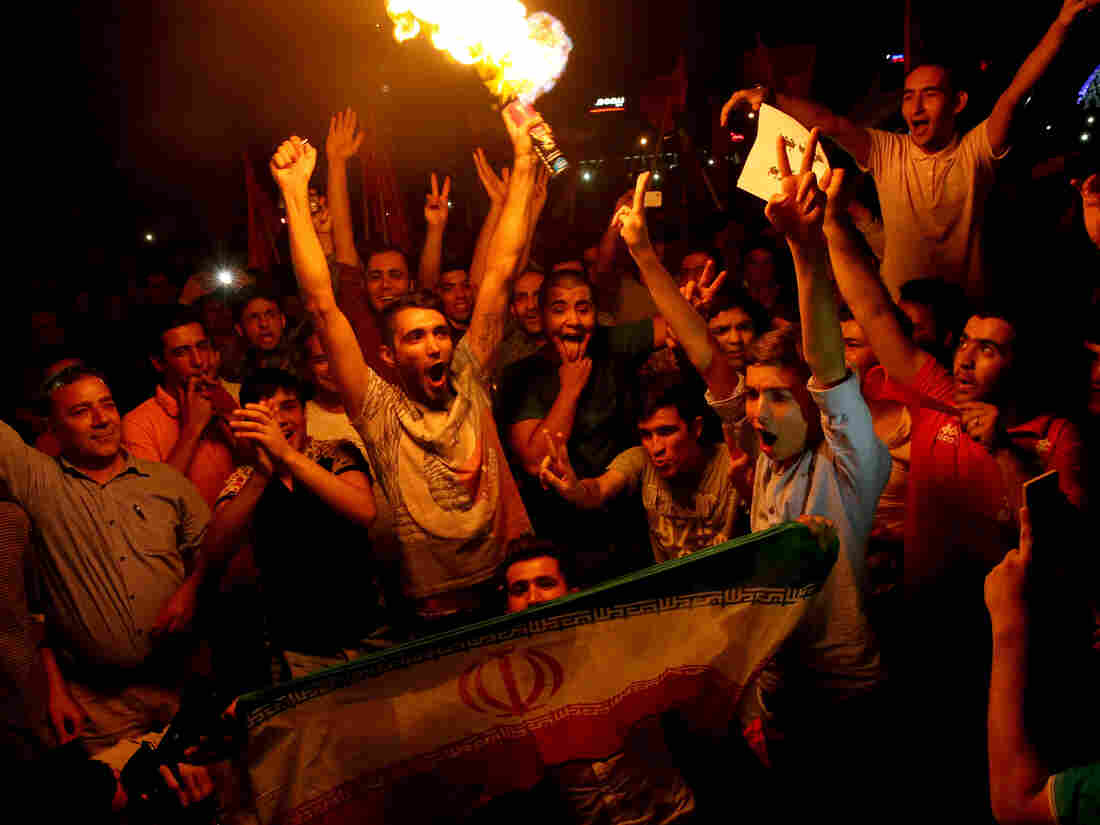 Iranians cheer during street celebrations July 14 in Tehran, Iran, following a landmark nuclear deal. Many young Iranians want their country to open to the world, and see the nuclear agreement as an important step in ending Iran's isolation. Ebrahim Noroozi/AP hide caption 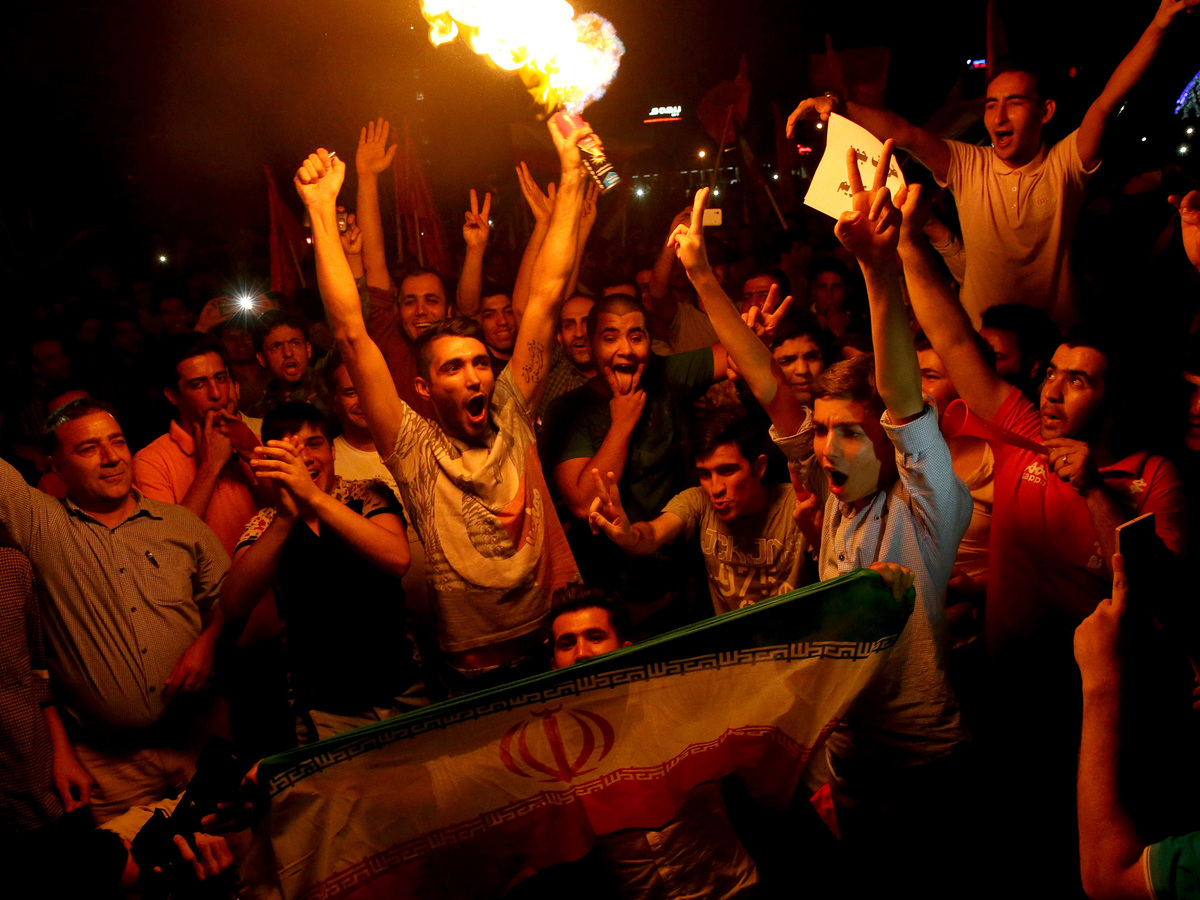 Iranians cheer during street celebrations July 14 in Tehran, Iran, following a landmark nuclear deal. Many young Iranians want their country to open to the world, and see the nuclear agreement as an important step in ending Iran's isolation.

"The next [U.S.] president is going to have to deal with that reality, which is ... if he starts or she starts talking about walking away from the deal, you will immediately have a chorus of people who are saying 'this begins the march to war — it's Iraq all over again.'"

Kagan believes that the mutual suspicion between the U.S. and Iran will keep tensions running high, and that it's a mistake to go forward with a deal that did not receive bipartisan support in the U.S.

This comes from Haleh Esfandiari, an Iranian-American scholar, who was imprisoned in Iran in 2007.

She's now in Washington, at the Wilson Center, and sees the Iran agreement as a beginning.

"The ball is in the court of [President Hassan] Rouhani. He has now to deliver his other promises to the people, regardless of what the supreme leader said," according to Esfandiari.

Rouhani won election in 2013, promising better relations with the world, and also a better life at home.

The clerics who oversee the government will face pressure to open up the country, despite their reluctance.

Esfandiari does not expect the forces of change to topple Iran's government, but she does expect smaller changes.

Will a more democratic society emerge? "It has to," Esfandiari says.

Will a different Iranian foreign policy emerge? Again, she says, "it has to."

"This does not mean that Iran will give up the support for Hezbollah, or its important role in Iraq or in Syria," Esfandiari says. "But it means that it will reach out to the Persian Gulf countries."

Will relations with the U.S. improve?

"It's very difficult to predict what improvement means," she says. "Will they have trade relations? Sure. Will more American tourists — not in great numbers, but in modest numbers — visit Iran? Yes. Will Iran and the U.S. cooperate on ISIS [the Islamic State]? Sure. So there is going to be probably modest improvement, but gradual improvement."

Journalist and scholar Robin Wright has visited Iran many times in recent decades, and in May toured the U.S. Embassy in Tehran, where Iranian revolutionaries took American hostages in 1979. The Iranians have turned the brick building into a museum.

"Everything looks exactly as it was when it was captured," Wright says. "The tape for the telex machine and the intercepts machine are in place, the passport equipment — the stamps and so forth — are in place. It looks like the whole staff just got up and went out for a coffee break.

"I was given a tour by a docent, who is with one of the branches of the Revolutionary Guards. And I ask him the question: 'Do you foresee the reopening of this embassy anytime soon?' And he said, 'No.' "

But her tour guide did say he believed there would be some sort of limited relationship between the U.S. and Iran.

"The nuclear deal, at the end of the day, is not just about nukes — it's about the future of Iran politically; it's about the future of the revolution," Wright says. "And there are many in Iran who are afraid that President Rouhani is the equivalent of President Gorbachev, in seeing over the end of the Soviet Union. They are afraid there there are going to be too many openings, too many new ties with the outside world, that will corrupt or erode the political process."

Because Iranian conservatives hold such fears, Wright's scenario foresees the nuclear deal being followed by steps backward rather than forward: Conservatives might clamp down on society in an effort to hold off larger social changes.

"But the truth is that what's been unleashed here is a different kind of process," she says. "It's the beginning of a healing process."

The historical moment makes Wright think of a book by Crane Brinton called The Anatomy of Revolution, which refers to the beginning of normalcy at the end of a "raging fever" of revolution.

"But that doesn't mean that it's going to happen soon, and that it's not going to be fitful," she adds. "The revolutionary philosophy hasn't changed, but there is an opening — and it is just that. It is one opening, when there need to be a lot more to make a difference."

Iran and the U.S. have a long and bitter history. There is no scenario where they escape that history. They do have a chance to add to it.