Accessibility links
American Dad Fights For The Afghan Interpreter Who Aided His Fallen Son : Parallels Some 13,000 Afghans and Iraqis who worked with the U.S. are awaiting visas they were promised. NPR's Quil Lawrence looks at a case involving an Afghan interpreter who was in the thick of the fighting. 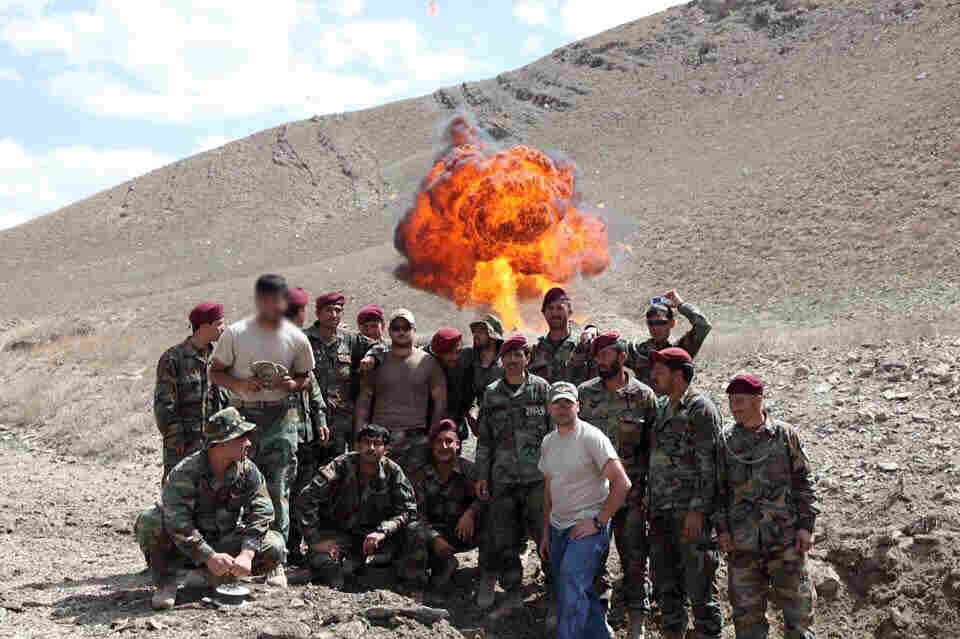 AK, in a tan T-shirt on the left, his face blurred for his protection, was an Afghan interpreter who worked for the U.S. military. He poses with Afghan commandos in front of a controlled explosion. AK worked closely with American Jonathan Schmidt, in the dark tan shirt and a baseball cap (in the center). AK was with Schmidt when he was killed in a 2012 firefight. AK is now seeking a U.S. visa. Courtesy of Phil Schmidt hide caption 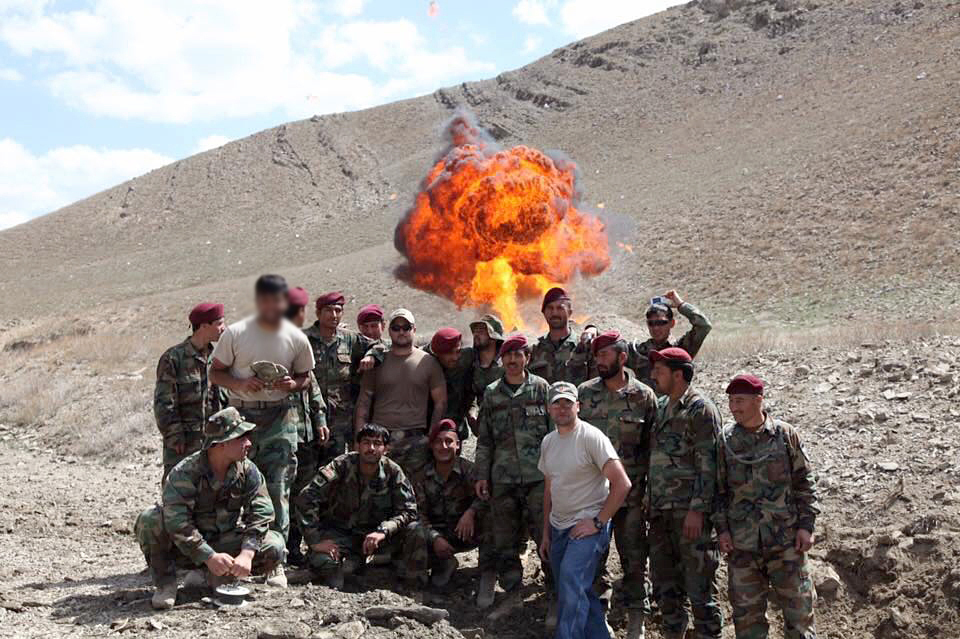 AK, in a tan T-shirt on the left, his face blurred for his protection, was an Afghan interpreter who worked for the U.S. military. He poses with Afghan commandos in front of a controlled explosion. AK worked closely with American Jonathan Schmidt, in the dark tan shirt and a baseball cap (in the center). AK was with Schmidt when he was killed in a 2012 firefight. AK is now seeking a U.S. visa.

After his son died fighting in Afghanistan, Phil Schmidt became a walking memorial.

Schmidt has tattoos of his son Jonathan's face, and of his son's medals, and the date that he fell in combat, Sept. 1, 2012.

Jonathan Schmidt should have been coming home from Afghanistan that month. Instead two Army officers arrived at Schmidt's home bearing the news that Jonathan had died in a firefight.

They didn't have many details, only that Jonathan had been shot in the back — and that didn't make sense to Phil Schmidt. As he set out to find out more, one of his son's teammates made a surprising suggestion.

That's the nickname of the Afghan interpreter who worked with Jonathan through his whole deployment with a Special Forces team. 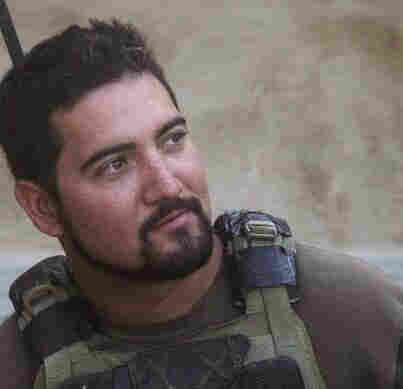 Staff Sgt. Jonathan Schmidt was killed during a firefight in Afghanistan on Sept. 1, 2012. He worked closely with AK, the nickname for an Afghan interpreter who is seeking a visa to the U.S. Schmidt's father and AK have grown close and are in touch almost daily on Facebook or by phone. Courtesy of Phil Schmidt hide caption

Schmidt reached out to AK on Facebook and they started talking. At first, Schmidt mostly wanted to know about his son's final moments in a remote Afghan village.

"They called us on the radio and said these guys [are] under attack in a compound," said AK, who spoke to NPR from Kabul. His real name is being withheld because Afghans who worked with Americans still face threats.

"Jon was really brave. He grabbed the 240 [machine gun] and ran toward the compound," says AK.

Jon ran into an ambush. By the time AK and the medic arrived at his side, Jon had been shot through the back of his neck, from above.

It gave Schmidt some comfort to hear how brave his son had been. And as he talked more with the young Afghan, on the phone and on Facebook, Schmidt reckoned that AK was pretty brave too.

"He's 27 years old, not seen a day without war from the day he was born," says Schmidt.

AK was just a baby in the late 1980s when his father was killed by a rocket during the Soviet occupation of Afghanistan.

When the American military came to Afghanistan years later, AK volunteered as an interpreter. Before long, AK was working exclusively with Special Forces, in the thick of the fighting.

"He's been shot at, blown up, wounds to his chest and legs, he's been doing this since he was 19," says Schmidt. "Putting himself in harm's way, to help us."

Nineteen is about the same age that Jonathan Schmidt joined the Army. And since AK never knew his father, he asked Phil Schmidt if he could call him "Dad."

The two talk daily by Facebook or phone. AK asks, "How's Mama?" and they joke about doing father-son stuff around the house. 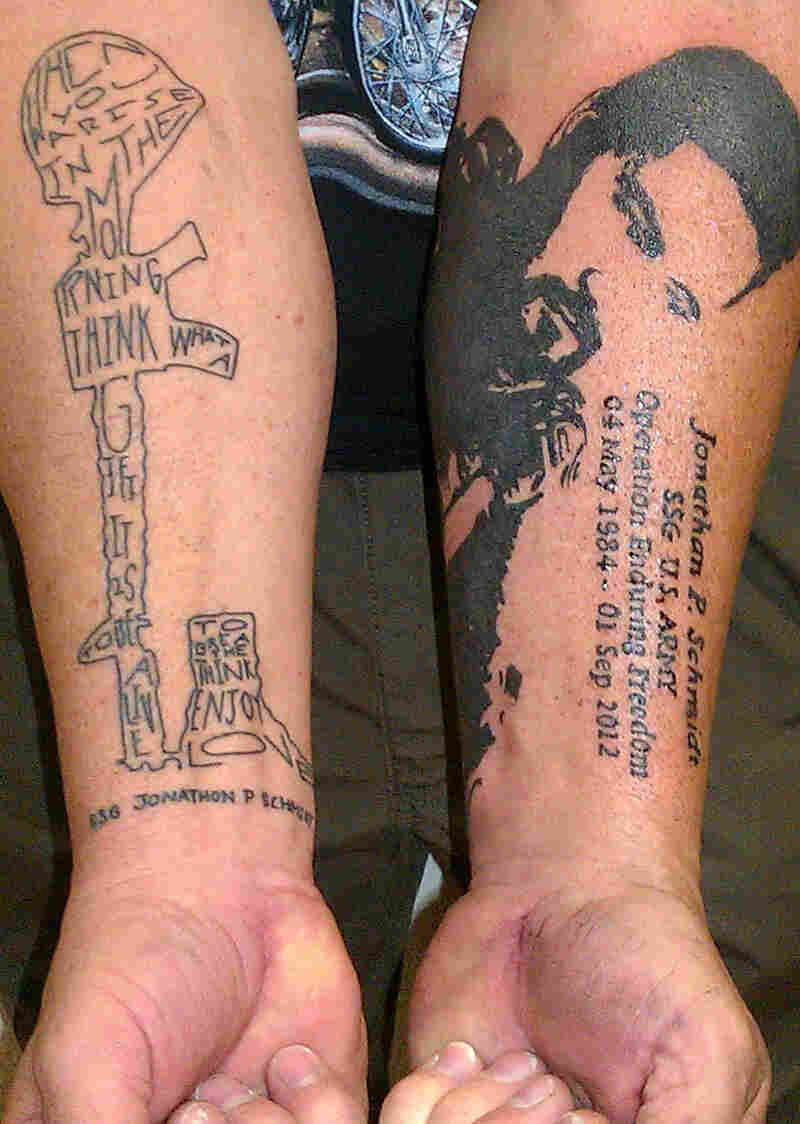 Phil Schmidt shows two of the five tattoos he has received to pay tribute to his son Jonathan, who was killed in Afghanistan three years ago. Courtesy of Phil Schmidt hide caption

There's no reason that shouldn't happen some day. Afghans and Iraqis who worked with Americans during the wars in those countries were promised U.S. visas. A program called the Special Immigrant Visa was designed to reward Afghans and Iraqis just like AK.

Since 2007, the U.S. has provided more than 14,000 visas to Afghan and Iraqi workers, who are allowed to bring their family members as well. But at least 13,000 are still waiting.

When AK applied for the visa, he had a glowing reference letter from the commander of all U.S. Special Operations in Afghanistan. He was told to wait about 90 days. That was four years ago.

"It's unclear what exactly is holding these folks up," says Katie Reisner with the International Refugee Assistance Project at the Urban Justice Center. She's part of a lawsuit representing 16 Iraqi and Afghan translators, including AK.

They're suing the U.S. government for not delivering the visas. Reisner says it's difficult, even for members of Congress, to get a clear answer from the State Department or Homeland Security about why people like AK are still waiting.

"They seem to be model applications. The bottom line is they've been waiting too long for an answer," she says.

The State Department says it granted 9,000 of the visas last year, a six-fold increase over 2013. An official said the process is complicated and can be slowed by mandatory vetting for national security reasons. The department won't comment on individual cases.

The State Department's Jarrett Blanc, deputy special representative for Afghanistan and Pakistan, says every person working on the visa program has served time in a war zone.

"There's not one of us who does not deeply appreciate and understand the debt we owe to the Afghan and Iraqi colleagues who have worked with us in the field," he says.

The State Department won't comment on the lawsuit and has moved to dismiss the case. But in court papers the government says AK and other plaintiffs have been refused visas.

Inside A Post-Taliban School

That's news to AK and Schmidt. When they look up his case on the State Department website, it says the application is still being processed.

"I pray every day for AK and his family and for the visa number to come through," says Schmidt.

Schmidt says he gets nervous when he doesn't hear from AK first thing in the morning. And AK's getting anxious too — the Special Forces soldiers he worked with for six years told him he'd be rewarded.

"They promised me a visa. I don't for how know how long I will wait," he says. Americans are withdrawing from Afghanistan. When I get targeted by someone, get killed — then you give me a visa?"

That's no exaggeration. This month, strangers banged on the door of AK's home in Afghanistan. When his brother answered, they asked for AK — by his real name. His brother shouted to him, "Run!"

AK escaped over the back wall and got away. The men tussled with his brother and cousin but fled before police came. AK is now in hiding, still waiting for a visa.