Accessibility links
Risking Arrest, Thousands Of Hungarians Offer Help To Refugees : Parallels Hungarian laws criminalizing the offer of rides to people who enter the country illegally are aimed at traffickers — but are making some ordinary Hungarians think twice about helping asylum seekers. 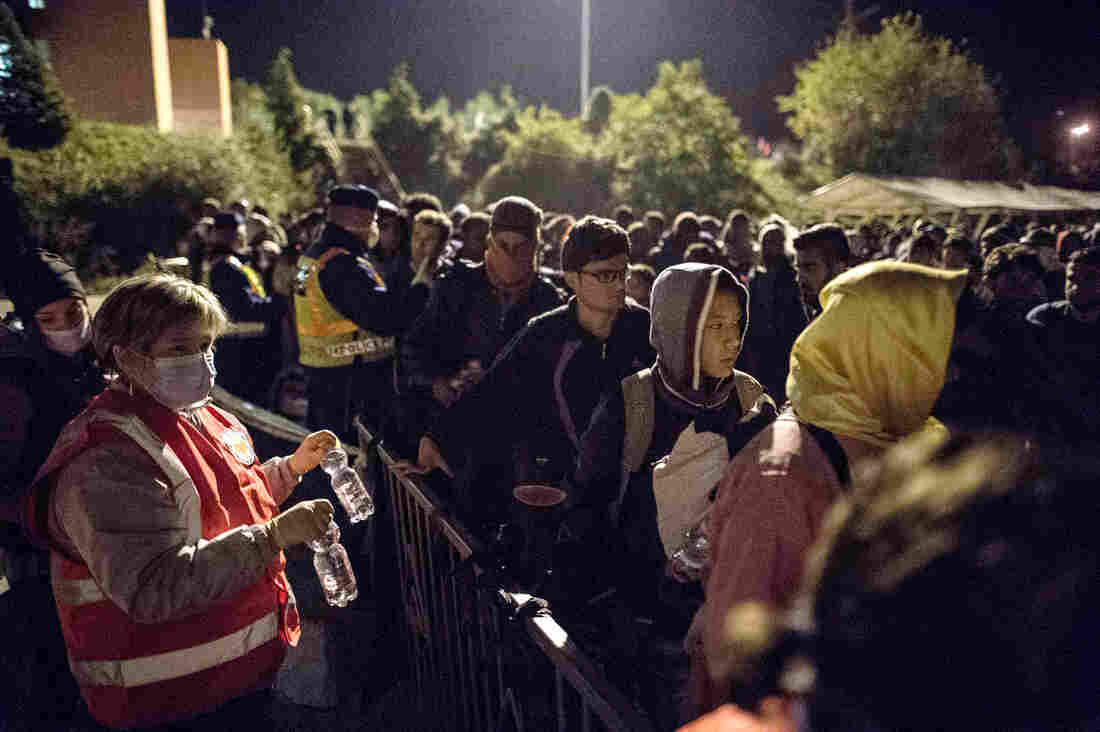 Migrants arriving in Hungary from Croatia are offered water by volunteers in a resting zone near the border. Offers of food and water are permitted, but some other forms of help are restricted by Hungarian law. Tamas Soki/EPA/LANDOV hide caption 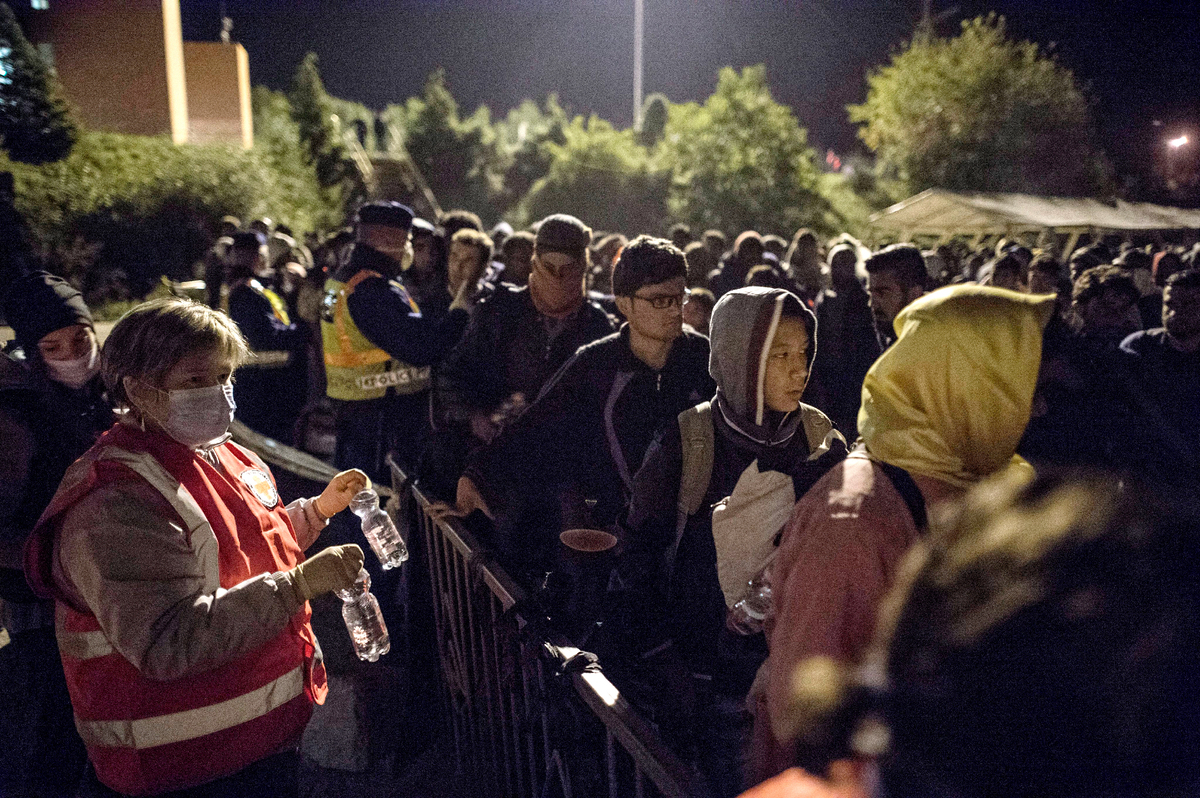 Migrants arriving in Hungary from Croatia are offered water by volunteers in a resting zone near the border. Offers of food and water are permitted, but some other forms of help are restricted by Hungarian law.

Driving in rural, southern Hungary, especially at night, you're likely to see people emerging from dark forests along the side of the road. They trudge along the highway's narrow shoulder and sometimes flag down passing cars, asking for help.

They're migrants and refugees who've entered Hungary by the tens of thousands in recent months, mostly en route to Germany and other northern European countries.

But it's illegal for civilians in Hungary to help them get there.

Hungarian law prohibits offering rides — even for free — to people who've entered the country illegally and without a visa. Another law grants Hungarian police and military extraordinary powers to search private homes if they suspect someone of harboring illegal migrants.

The laws, passed in stages earlier this year, target human traffickers, and have led to a few high-profile arrests. Back in August, it was in Hungary that 71 Syrian refugees were loaded into a northbound truck. They were found suffocated to death in the same truck, on the side of a highway in Austria, on Aug. 28. Hungarian police arrested four alleged smugglers. 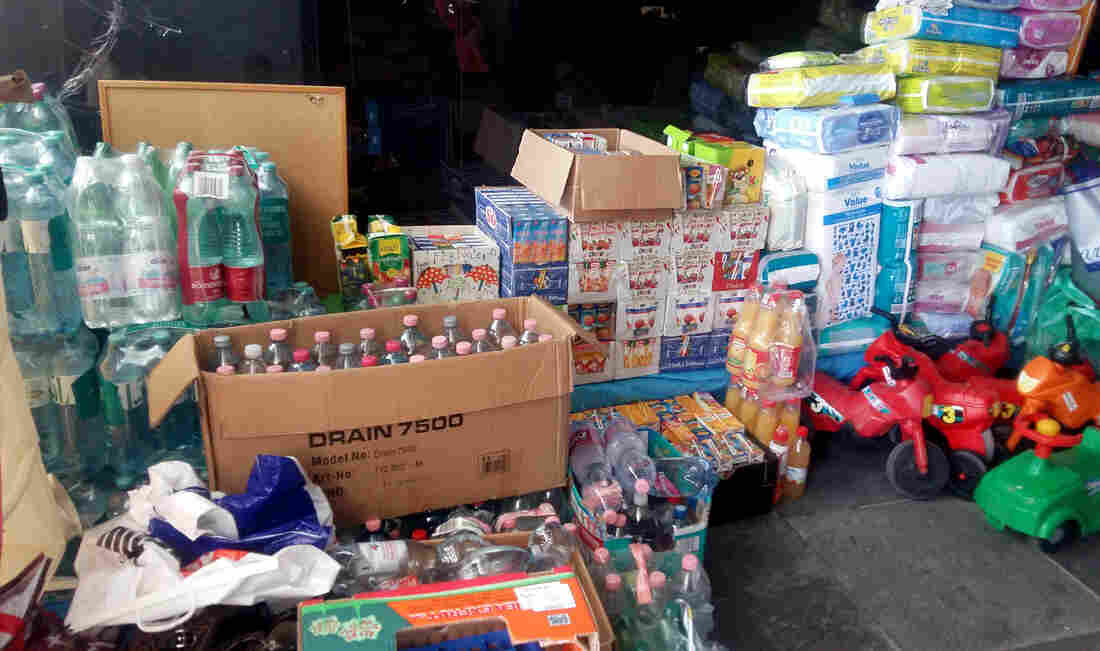 Crates of food and sleeping bags were stockpiled by volunteers at a Migration Aid office in downtown Budapest. Giving food and supplies is permitted, but offering transport or shelter to anyone entering Hungary illegally is criminalized under Hungarian law. Lauren Frayer for NPR hide caption

But the laws are also making well-intentioned volunteers think twice about helping — because they, too, could be prosecuted, fined or jailed.

At a Migration Aid warehouse in downtown Budapest, volunteers stockpile crates of fruit and sleeping bags for refugees. Dozens of Hungarians stop by to help, including Gyorgy Goldschmit, who offers up his own home. His wife and child are going out of town for a few weeks and he says he has room for another family, if needed.

"My family is not going to be there, and I will be there — so it's obvious that someone could come," Goldschmit says.

"Maybe they cannot help like this because that would be considered as helping illegally or trafficking," Goldschmit says. "But I don't care so much."

Thousands Of Migrants Stranded In Serbia After Hungary Seals Border

Like many Hungarians, Goldschmit is not afraid of prosecution. Thousands are helping. But it's unclear how many more are dissuaded by these laws.

It's also unclear how aggressively the laws are being enforced. The highest-profile case so far involved a Hungarian man arrested in April after using a local ride-share website, through which fuel costs are shared, to give lifts to refugees.

He was acquitted after a months-long legal battle, but his case served as a well-publicized warning to anyone thinking of transporting migrants.

"Basically, if I drive you across [the country] and you don't have a visa, then I'm liable criminally," says Marta Pardavi, a human rights lawyer with the Budapest branch of the Helsinki Committee. "We have advised volunteers doing this that there is a risk involved — the risk of a criminal procedure, of having to go to interrogations — and I think that risk is very real."

But in southern Hungary, where most migrants and refugees enter the country from Serbia or Croatia, volunteers line up to offer them free rides — often right alongside smugglers, who charge them money. On one recent afternoon, NPR witnessed Serbian smugglers offering to transport people for 1,000 euros — about $1,125 — per passenger to the Austrian border.

Among the volunteers offering rides for free is Austrian Hans Breuer. He's driven several Syrian families from the Hungary-Serbia border all the way to Austria — and he says he knows full well that what he's doing is illegal here.

"I don't ask the police — I just go. I'm constantly scanning the road, and if I see police, I go another way," Breuer says. "I hope nobody will stop me. Maybe I'm risking prison time, and yes, that scares me." 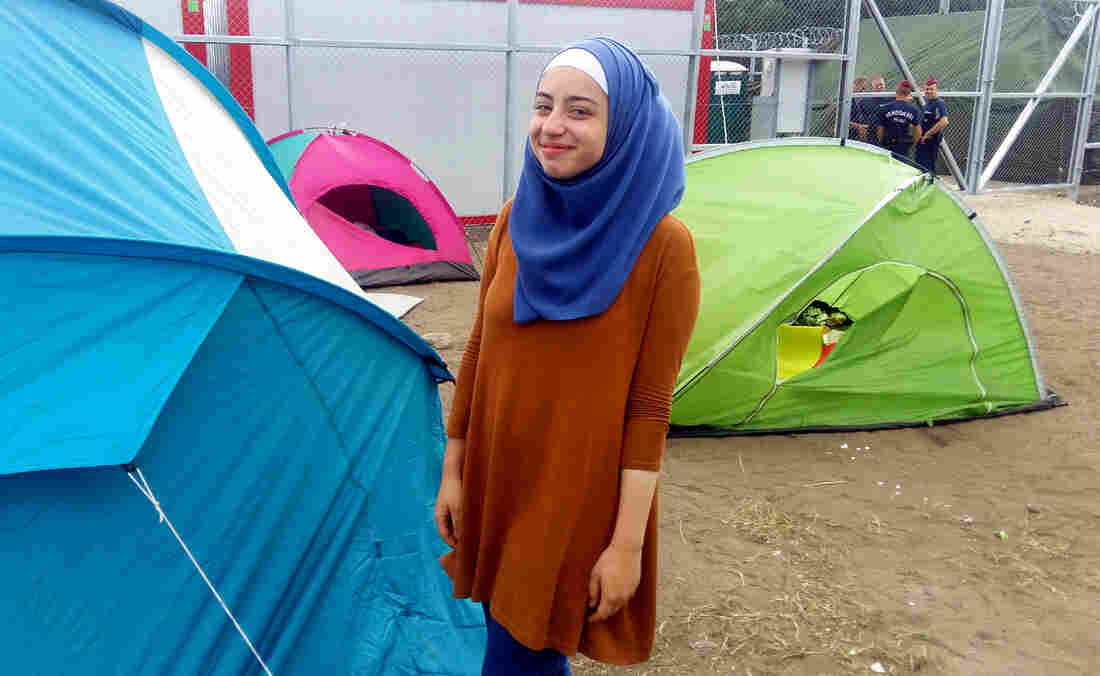 Judy al-Shtawi, 17, a Syrian refugee, waits outside a migrant detention facility in southern Hungary, near the Serbian border. She was approached by an Austrian man, offering her and her siblings a free ride to the Austrian border. Such offers are illegal — considered as smuggling — and they declined. Lauren Frayer for NPR hide caption

But Breuer says his mission is personal, and worth the risk.

"My father was a refugee 70 years ago. Half of his family was killed by the Nazis. Today the Nazis are the Islamic State and the Jews are the Syrians running away," he says. "It's the same situation. A lot of what we see here reminds us of those years."

Among those to whom Breuer offers a ride are 17-year-old Judy al-Shtawi and her siblings, from Syria. They were separated from their parents amid confusion crossing the border into Hungary from Serbia. They want to reach Austria quickly, in hopes of being reunited. But they don't know whether to get into a stranger's car.

"I don't know — we are afraid. Who is he?" Shtawi asks a visiting reporter. "Why? He doesn't want money, nothing?"

She says she's not accustomed to such kindness. She glances across the street at Serbian smugglers, offering rides, too. She says she doesn't know whom to trust.

Breuer is risking arrest to help the Shtawi family. But the young Syrian opts for a Hungarian detention camp instead and waits for a legal ride north.