Accessibility links
A South Korean City Designed For The Future Takes On A Life Of Its Own : Parallels Songdo City was planned as a futuristic international business hub. Instead, it's become popular among Koreans as an attractive residential area. This story is the latest in NPR's Cities Project. 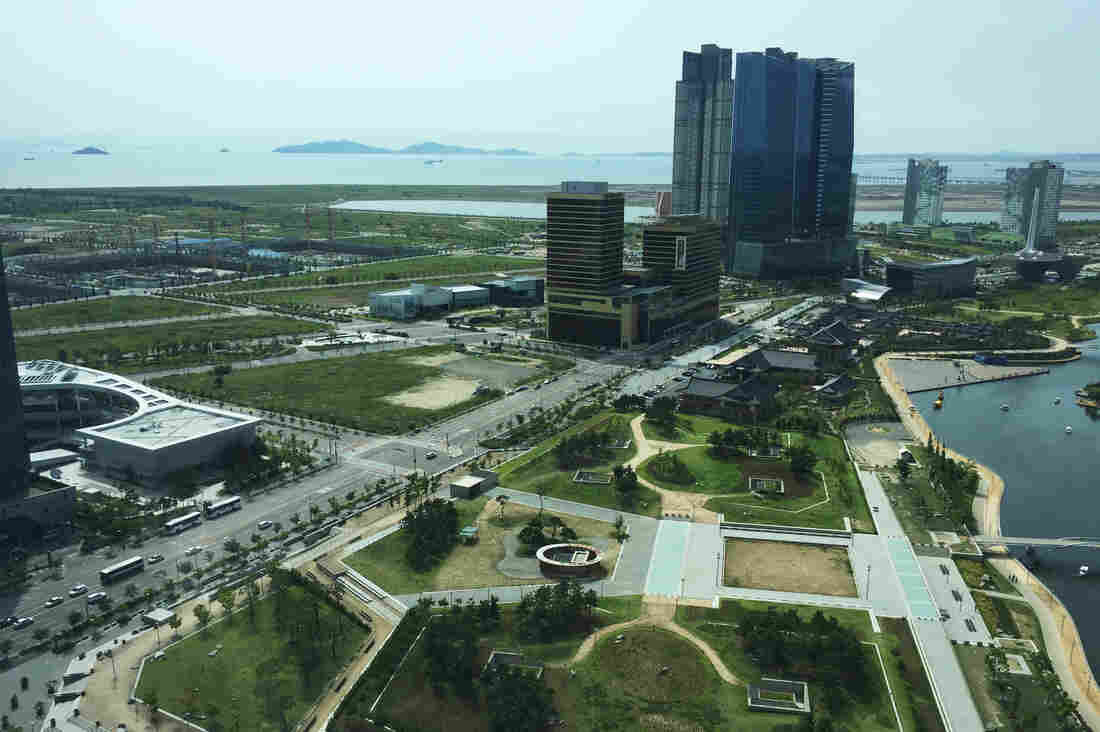 Songdo, outside Seoul, was envisioned as a futuristic international business hub, drawing residents from all over the world. Instead, this young city has become populated mostly by Koreans. Ari Shapiro/NPR hide caption 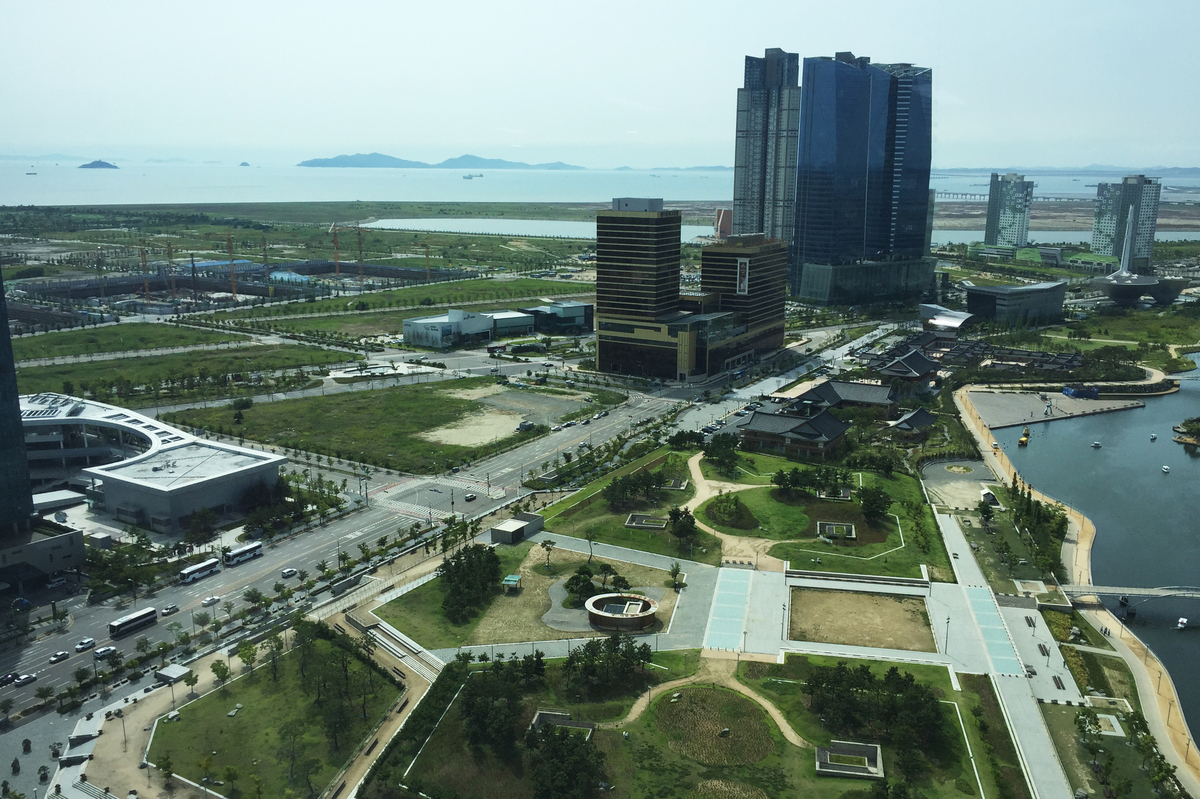 Songdo, outside Seoul, was envisioned as a futuristic international business hub, drawing residents from all over the world. Instead, this young city has become populated mostly by Koreans.

This story is the latest in NPR's Cities Project.

Getting around a city is one thing — and then there's the matter of getting from one city to another. One vision of the perfect city of the future: a place that offers easy access to air travel.

In 2011, a University of North Carolina business professor named John Kasarda published a book called Aerotropolis: The Way We'll Live Next. Kasarda says future cities should be built intentionally around or near airports. The idea, as he has put it, is to offer businesses "rapid, long-distance connectivity on a massive scale."

Songdo, a city built from scratch in South Korea, is one of Kasarda's prime examples. It has existed for just a few years.

"From the get-go, it was designed on the basis of connectivity and competitiveness," says Kasada. "The government built the bridge directly from the airport to the Songdo International Business District. And the surface infrastructure was built in tandem with the new airport."

Songdo is a stone's throw from South Korea's Incheon Airport, its main international hub. But it takes a lot more than a nearby airport to be a city of the future. Just building a place as an "international business district" doesn't mean it will become one.

Park Yeon Soo conceived this city of the future back in 1986. He considers Songdo his baby. "I am a visionary," he says.

Thirty years after he imagined the city, Park's baby is close to 70 percent built, with 36,000 people living in the business district and 90,000 residents in greater Songdo. It's about an hour outside Seoul, built on reclaimed tidal flats along the Yellow Sea. There's a Coast Guard building and a tall trade tower, as well as a park, golf course and university.

Chances are you've actually seen this place. Songdo appears in the most famous music video ever to come out of South Korea.

"Gangnam Style" refers to the fashionable Gangnam district in Seoul. But some of the video was filmed in Songdo.

"I don't know if you remember, there was a scene in a subway station. That was not Gangnam. That was actually Songdo," says Jung Won Son, a professor of urban development at London's Bartlett School of Planning. "Part of the reason to shoot there is that it's new and nice."

The city was supposed to be a hub for global companies, with employees from all over the world. But that's not how it has turned out.

Songdo's reputation is as a futuristic ghost town. But the reality is more complicated.

A bridge with big, light-blue loops leads into the business district. In the center of the main road, there's a long line of flags of the world. On the corner, there's a Starbucks and a 7-Eleven — all of the international brands that you see all over the world nowadays.

The city is not empty. There are mothers pushing strollers, old women with walkers — even in the middle of the day, when it's 90 degrees out. 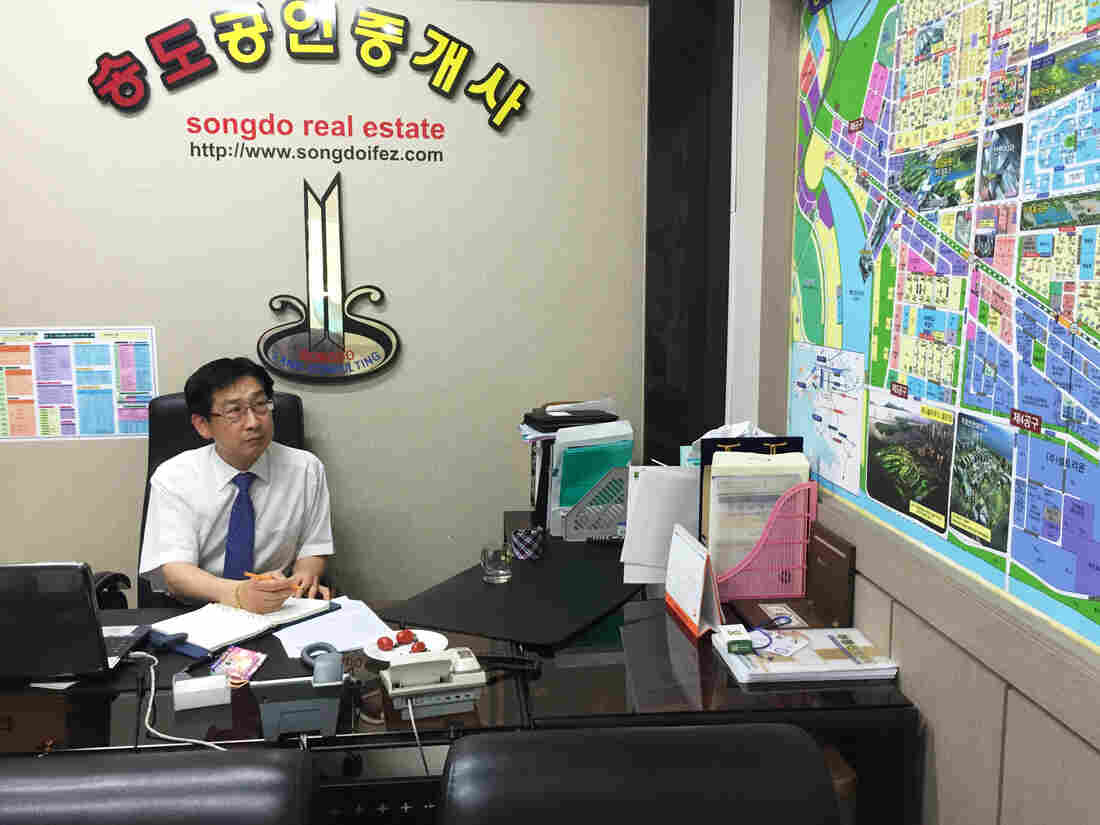 Byun Young-Jin, who chairs Songdo's real estate association, says demand for property has boomed in the last couple of years and most buyers are Korean. Ari Shapiro/NPR hide caption 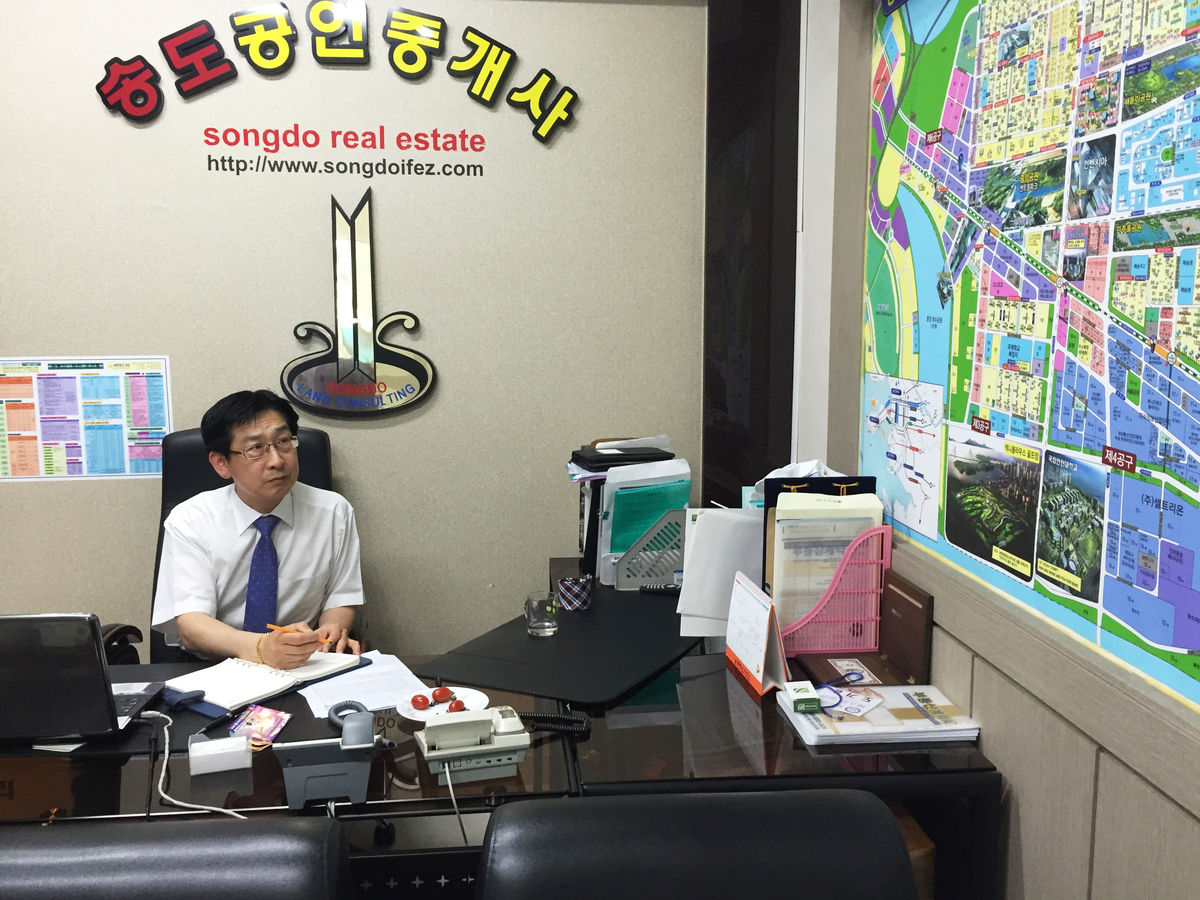 Byun Young-Jin, who chairs Songdo's real estate association, says demand for property has boomed in the last couple of years and most buyers are Korean.

Byun Young-Jin chairs the Songdo real estate association and started selling property here when the first phase of the city opened in 2005. He says demand has boomed in the past couple of years.

Most of his clients are Korean. In fact, the developer says, 99 percent of the homes here are sold to Koreans. Young families move here because the schools are great.

And that's the problem: Songdo has become a popular Korean city — more popular as a residential area than a business one. It's not yet the futuristic international business hub that planners imagined.

"It's a great place to live. And it's becoming a great place to work," says Scott Summers, the vice president of Gale International, the developer of the city. The floor-to-ceiling windows of his company's offices overlook Songdo Central Park, with a canal full of kayaks and paddle boats. Shimmering glass towers line the perimeter.

"What's happened is, because we focused on creating that quality of life first, which enabled the residents to live here, what has probably missed the mark is for companies to locate here," he says. "There needs to be strong economic incentives."

The city is still unfinished, and it feels a bit like a theme park. It doesn't feel all that futuristic. There's a high-tech underground trash disposal system. Buildings are environmentally friendly. Everybody's television set is connected to a system that streams personalized language or exercise classes.

But Star Trek this is not. And to some of the residents, Songdo feels hollow.

"I'm, like, in prison for weekdays. That's what we call it in the workplace," says a woman in her 20s. She doesn't want to use her name for fear of being fired from her job. She goes back to Seoul every weekend. "I say I'm prison-breaking on Friday nights."

But she has to make the prison break in her own car. There's no high-speed train connecting Songdo to Seoul, just over 20 miles away.

The man who first imagined Songdo feels frustrated, too. Park says he built South Korea a luxury vehicle, "like Mercedes or BMW. It's a good car now. But we're waiting for a good driver to accelerate."

But there are lots of other good cars out there, too. The world is dotted with futuristic, high-tech cities trying to attract the biggest international companies.

Songdo's backers contend that it's still early, and business space is filling up — about 70 percent of finished offices are now occupied.

Brent Ryan, who teaches urban design at MIT, says Songdo proves a universal principle. "There have been a lot of utopian cities in history. And the reason we don't know about a lot of them is that a lot of them have vanished entirely."

In other words, when it comes to cities — or anything else — it is hard to predict the future.