Accessibility links
U.S.-Backed Saudi Bombing Campaign Blamed For Civilian Deaths In Yemen : Parallels Saudi Arabia's U.S.-backed airstrike campaign in Yemen was supposed to quash advances by Houthi rebels in short order. But the conflict is grinding on and the humanitarian crisis is growing worse. 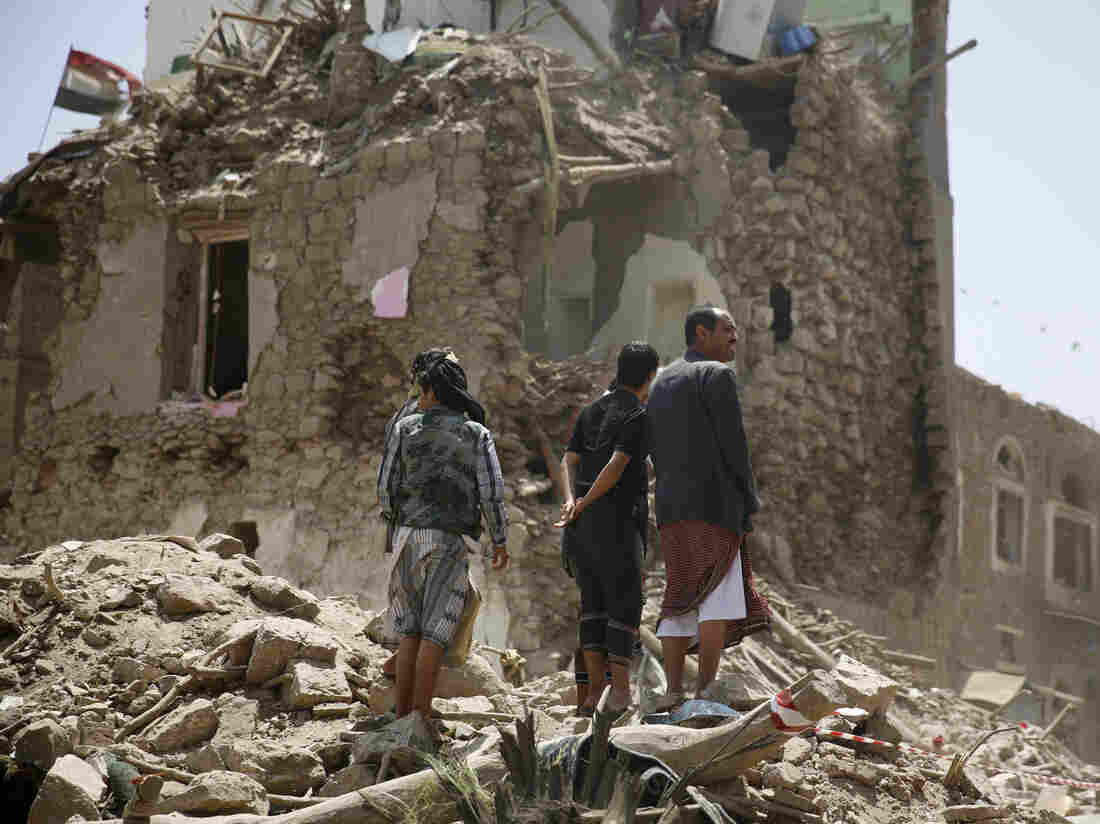 People stand amid the rubble of a house damaged by a Saudi-led airstrike last month in the old city of Sanaa, Yemen's capital. Hani Mohammed/AP hide caption People stand amid the rubble of a house damaged by a Saudi-led airstrike last month in the old city of Sanaa, Yemen's capital.

A tragic incident this week in Yemen is intensifying scrutiny of a Saudi-led military campaign there, as well as the U.S. role in backing that Saudi offensive.

The Saudis are fighting rebels called Houthis who ousted the government. And while all sides are accused of abuses, increasing blame is turning toward the Saudis and their allies.

At a time when civilian casualties in general are on the rise, the deadliest single attack in Yemen since the conflict began in March occurred Monday near the western port city of Mokha. At least 130 civilians were killed, mostly women and children, says Hassan Boucenine, Yemen country director for Doctors Without Borders.

U.N. Steps In After Saudi Arabia Fails To Deliver Aid To Yemen

Boucenine says the airstrike made no sense. "It's obviously not a military target," he says. "It was a wedding, simply. And civilians."

There is growing criticism over the soaring number of civilian casualties in Yemen. Rupert Colville, spokesman for the U.N.'s High Commissioner for Human Rights, says 2,300 civilians have been killed so far. He says both sides in the conflict share blame, but the Saudi-led air campaign has been responsible for most of the deaths.

"Two-thirds of the reported civilian deaths during the conflict since March were caused by airstrikes," he says. "When you're getting this very high toll of civilians, it suggests something may be going badly wrong or perhaps not enough care is being taken."

Colville says the U.N. Human Rights Council has called on Saudi Arabia to investigate incidents where civilians were killed.

"They should really look into every single incident of this type and find out why civilians were hit or was the target with due care taken," he says. "Because that is a fundamental element of international humanitarian law, that's the laws of war."

Saudi Arabia says it takes care in its targeting, and lays blame on the Houthi rebels for many attacks. But unquestionably, Saudi Arabia and its coalition of mostly Gulf states has superior firepower over the Houthis.

The Atlantic Council's Nabeel Khoury, a former U.S. diplomat who served in Yemen, says that initially, the Saudis thought they could run an air campaign for a few weeks to counter the rebels.

"As the conflict went on," he says, "Saudis became more determined, and obviously this has been proven to be harder than they originally thought."

Khoury says Saudi Arabia is getting pulled deeper into the Yemen conflict and has now put troops on the ground, as well as accelerated its airstrikes. The U.S. provides logistical and intelligence support for the air campaign — even refueling its jets. It raises the question of how long the U.S. will back its Gulf ally as civilian deaths rise.

Khoury says the Obama administration has been quietly telling Saudi Arabia that it should negotiate with the Houthi rebels. He says others are speaking more loudly.

"Beyond the U.S., opinion in Europe and at the United Nations and throughout the civil society have all been alarmed by the death rate in Yemen, and just in general this air campaign has gone too far," he says.

Saudi Arabia's embassy in Washington did not return requests for a comment. Its military denies attacking the wedding party. Khoury says the Saudis should brace for more criticism if the airstrikes continue.

Human rights activists say the U.S. should support investigations into civilian deaths in Yemen or risk becoming associated with coalition abuses. The Pentagon says it has asked the Saudi government to investigate civilian casualties.