Accessibility links
Was Kunduz Attack A War Crime? Legal Analysts Say It's Difficult To Prove : Parallels A medical aid group says U.S. airstrikes on its hospital in Kunduz amount to a war crime. Analysts say an investigation is needed, but diplomatic fallout is more likely than a war-crime prosecution. 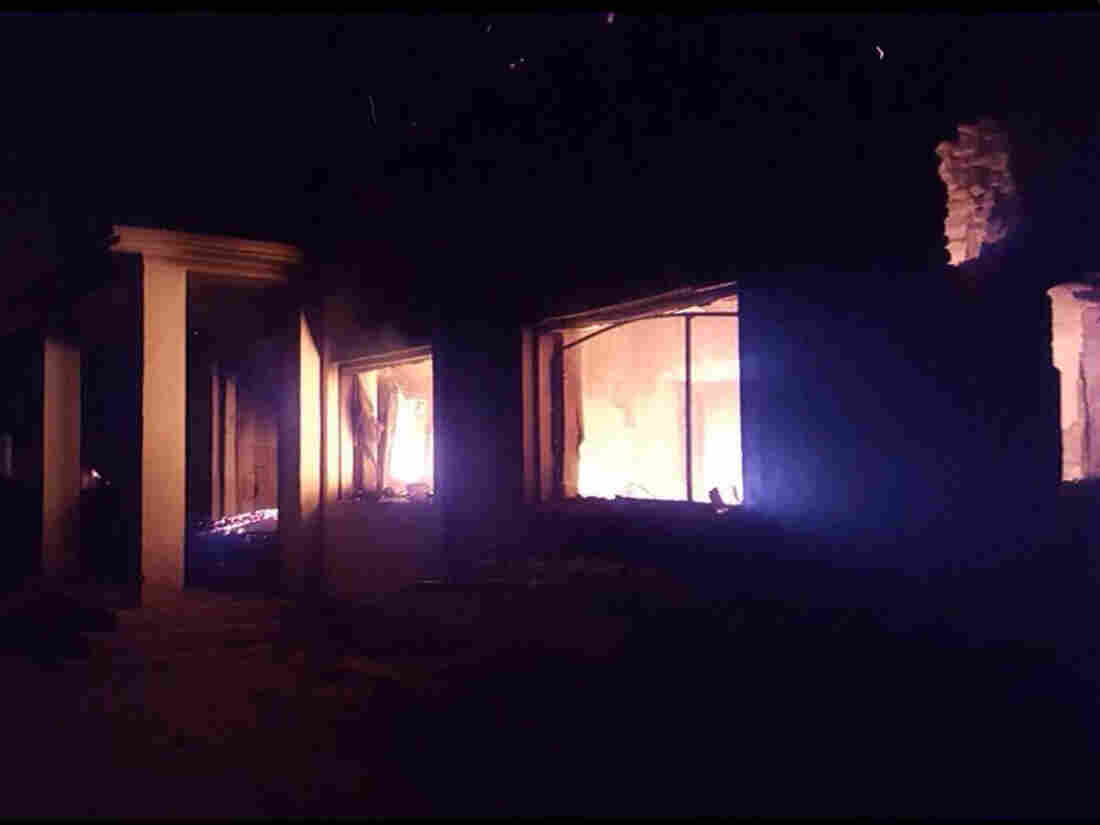 The trauma center operated in Kunduz by Doctors Without Borders was in flames after U.S. airstrikes on Saturday that left 22 dead, including medical staff and patients. AP hide caption 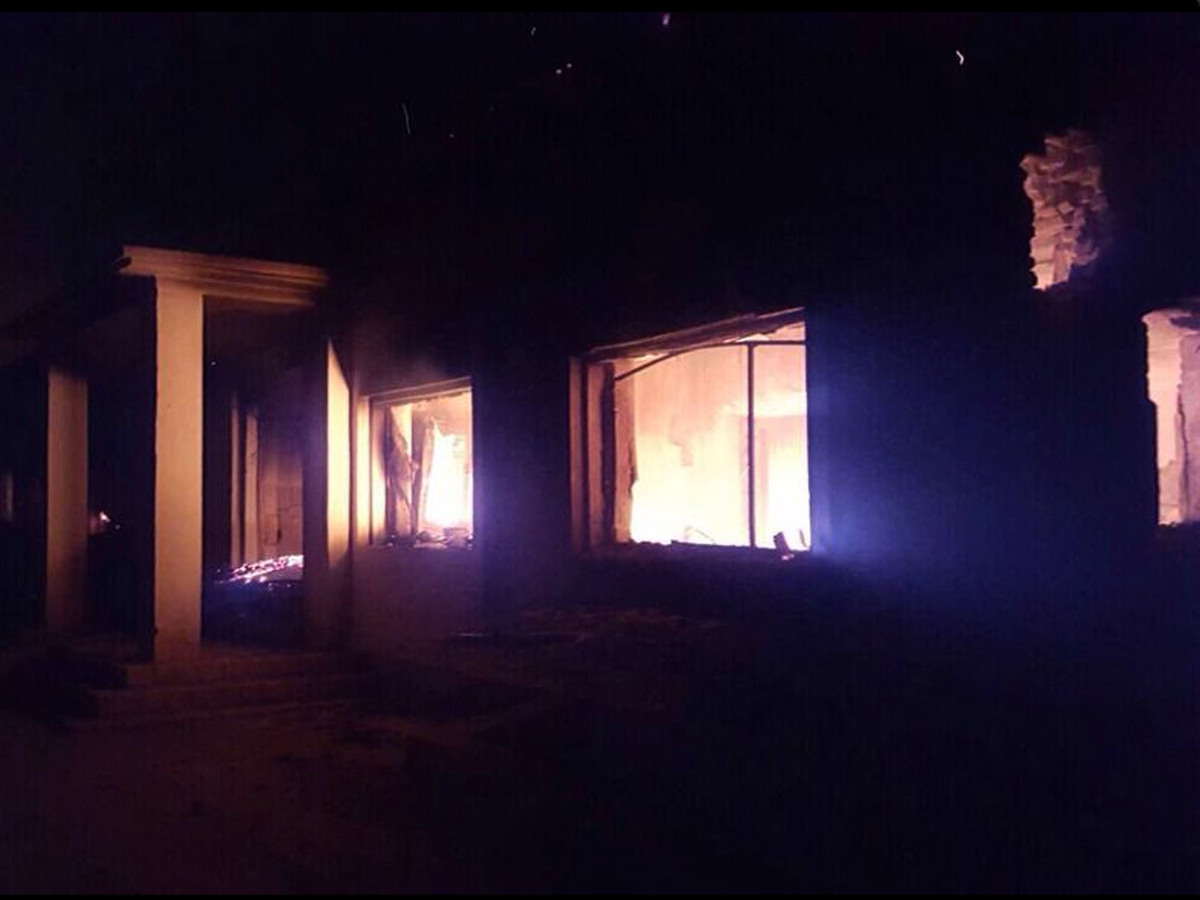 The trauma center operated in Kunduz by Doctors Without Borders was in flames after U.S. airstrikes on Saturday that left 22 dead, including medical staff and patients.

The international aid group Doctors Without Borders (Médecins Sans Frontières) is calling for an international investigation into what it calls a war crime in Afghanistan — Saturday's U.S. airstrikes that killed 22 people, including medical staff and patients at the organization's hospital in Kunduz.

"We're under the clear presumption that a war crime has been committed," Jason Cone, Doctors Without Borders' executive director, told NPR's Michel Martin on Sunday. "And we're demanding that a full and transparent investigation into the event be conducted by an independent, international body."

The U.S. now says that Afghan forces were fighting Taliban in the area and called in the airstrikes. Legal experts say it will be difficult to prove that a war crime occurred.

John Bellinger, a former legal adviser to the State Department, says the bombing of the hospital was a terrible tragedy, but he believes it would be a rush to judgment to call it a war crime.

"The mere fact that civilians are killed, that a hospital is damaged, doesn't automatically mean that there has been a war crime," he says. "It only becomes a war crime if it is shown that the target was intentionally attacked."

MSF says the hospital was struck repeatedly on Saturday, even though everyone in the area knew it was a working medical facility. "We had made clear the exact GPS coordinates of our health facilities in the Kunduz compound to coalition forces, to Afghan forces, to Taliban and to U.S. officials, both in Washington and Kabul and in both the civilian and military leadership," Cone told NPR on Sunday.

"The hospital was full of patients. That was widely known. We had close to 200 staff and patients that were at the hospital at the time of the attack. I want to reiterate that the main hospital building where medical personnel were caring for patients was repeatedly and very precisely hit during each aerial raid while the rest of the compound was left mostly untouched. So we see this as a targeted event."

John Sifton of Human Rights Watch says the U.S. needs to carry out a transparent investigation into what went wrong.

"For almost 15 years now, humanitarian groups have been giving information about the coordinates of protected sites like hospitals, orphanages, schools to the U.S. military," he says. "The U.S. military asks for this information so that they can avoid these instances. When something like this happens, it suggests a major failure in their own systemic efforts to avoid civilian casualties."

Theoretically, there are cases in which hospitals could become legitimate military targets if combatants are misusing the facility. But even then, Sifton says, the military response has to be proportionate.

"You can't kill 22 people, including lifesaving medical staff, in one of the only medical treatment centers in the region, just to get a couple Taliban," he says. "Or even 10."

Still, it is a high bar to call the Kunduz attack a war crime, says Robert Goldman, who teaches international law at American University.

"Are we going to have to make some kinds of reparation and so forth? Well, I think, you bet," he says. But, he cautions, it will be difficult to make a case that this was an intentional attack on a protected place — rather than just a case of poor intelligence or negligence.

"The burden would be on the prosecution to establish beyond a reasonable doubt that this was an attack willfully undertaken in the knowledge that it was an object entitled to protection," Goldman says. "That is a very, very high hurdle."

Goldman doesn't believe the U.S. has anything to fear from the International Criminal Court. Bellinger, the former State Department adviser, agrees, explaining that the court is "really not there to act like a local prosecutor investigating every single incident. It's there to investigate systematic war crimes or systematic atrocities."

There is diplomatic fallout from this sort of incident, though.

The U.S. will have to show that it takes international law seriously, Bellinger says, if it wants to claim the moral authority to continue to criticize countries like Syria — where human rights groups say doctors and hospitals have been targeted systematically in recent years.