Accessibility links
Here's Where Refugees Actually Wind Up : Parallels The surge of refugees into Europe this year can give the impression that the Continent is the leading destination. In reality, most flee to neighboring countries and remain for years, if not decades. 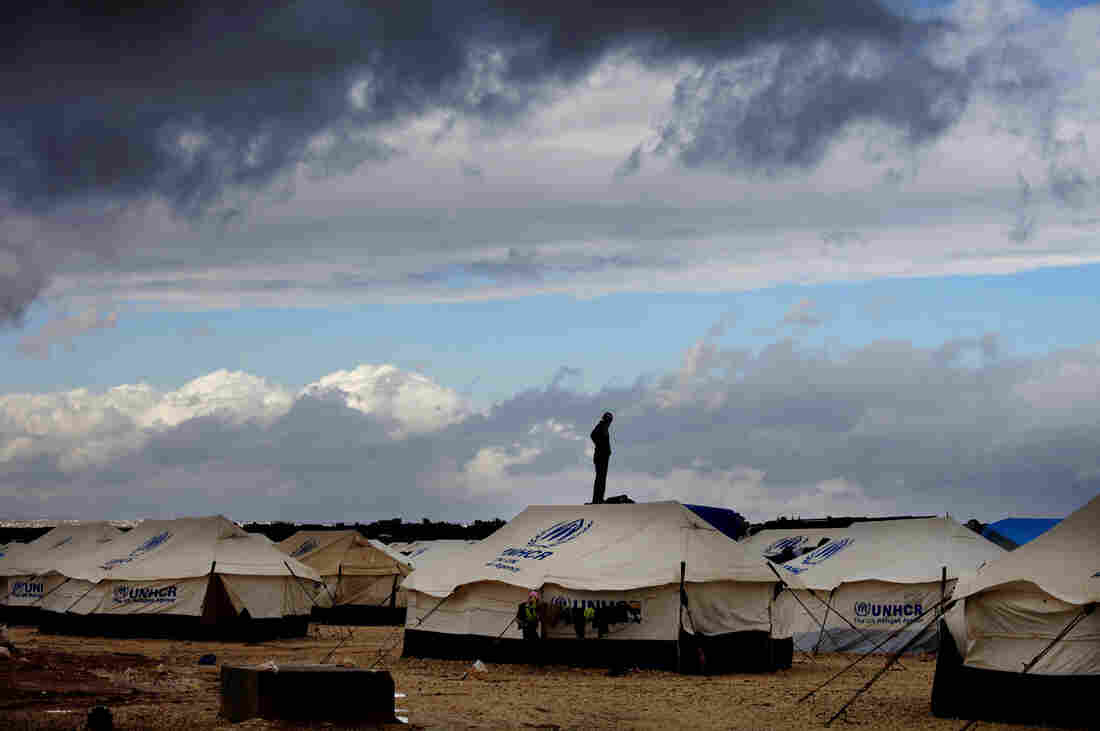 A Syrian refugee stands on top of a water tank at the Zaatari refugee camp in Jordan in 2013. While the surge of Middle Eastern refugees into Europe has grabbed world attention this year, most refugees find shelter close to their homeland, where they often remain for many years. Mohammad Hannon/AP hide caption 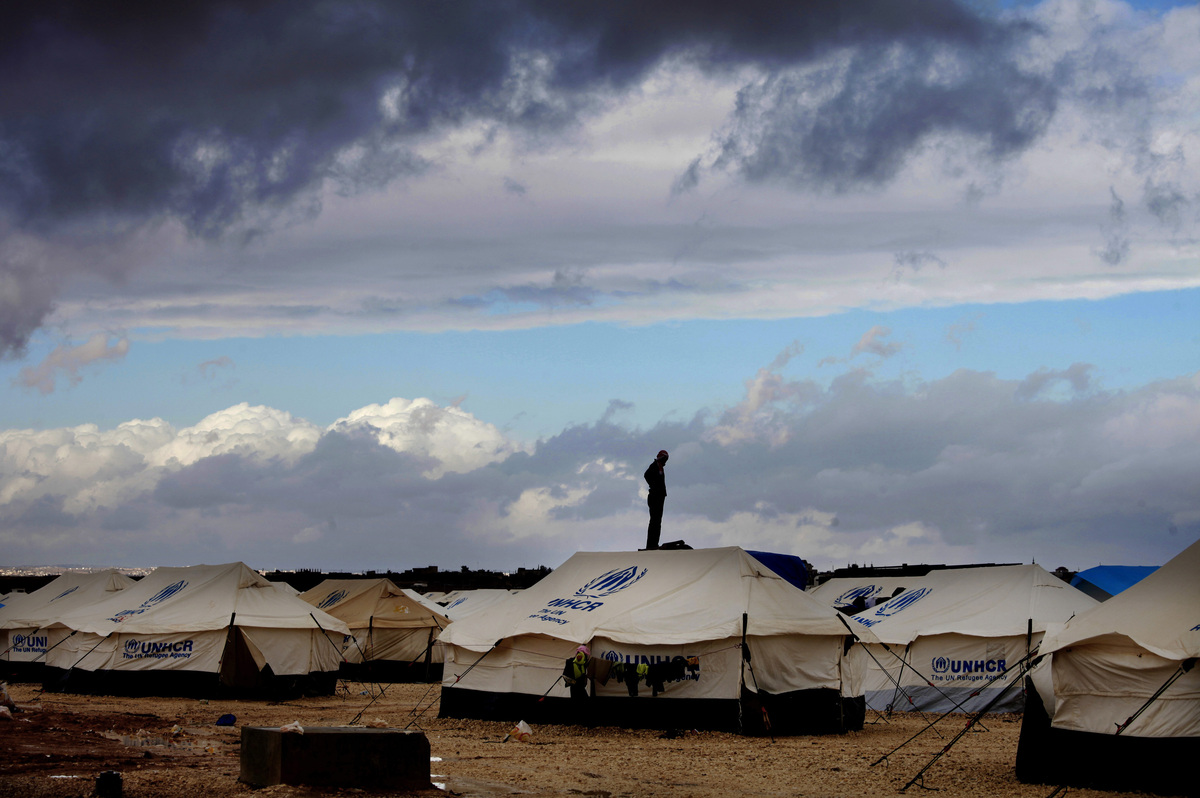 A Syrian refugee stands on top of a water tank at the Zaatari refugee camp in Jordan in 2013. While the surge of Middle Eastern refugees into Europe has grabbed world attention this year, most refugees find shelter close to their homeland, where they often remain for many years.

Given the flood of migrants into Europe this year, one might think that continent is the main destination for those fleeing the miserable conditions in their homelands in North Africa and the Middle East.

But as the charts on this page show, migrants, refugees and asylum-seekers overwhelmingly take shelter in countries very near their own convulsed homeland. Most often the place they flee and the place they take refuge are side by side in either the Middle East or Africa.

Worldwide, the number of displaced has been rising sharply and is now at roughly 60 million, the highest figure since the end of World War II.

At the beginning of this year, not a single European nation was among the top 10 destinations for refugees and asylum-seekers, according to the United Nations High Commissioner of Refugees.

Germany had 443,000 refugees and asylum-seekers at the start of 2015, ranking No. 13 worldwide, just behind Chad in central Africa, the U.N. figures show. When's the last time you heard about the refugee crisis in Chad?

Given the huge influx into Germany this year, it has now cracked the top 10, though the overall U.N. figures are updated only once a year.

Germany received just over 300,000 asylum applications this year through September, according to the Federal Interior Ministry. Chancellor Angela Merkel and other officials have said the actual number could be much higher because many recent arrivals have not yet registered.

Still, Germany is the European exception that proves the rule. It stands out on the Continent for its willingness to accept asylum-seekers.

Syria has been the world's leading producer of refugees recently. More than 4 million Syrians have now fled their homeland since the war erupted in 2011. The largest number have gone to Turkey. Many are also in Lebanon and Jordan.

Precise numbers are hard to come by, but a reasonable estimate would be that perhaps 10 to 15 percent of the Syrian refugees have gone to Europe over the past few years.

These charts also make clear that refugees tend to stay refugees for many years, often for decades.

The largest single group is the Palestinians, who now number more than 5 million, according to the U.N., which has an agency devoted entirely to these Palestinians. The 1948 Arab-Israeli War created the original Palestinian refugee population of some 700,000. Many have long since died, but their descendants are also classified as refugees and are concentrated in Lebanon, Jordan, Syria and the Palestinian territories. The Syrian war has caused some of those Palestinians to flee, making them refugees for a second time.

The Soviet invasion of Afghanistan in 1979 ignited the massive exodus from that country, and large numbers of refugees remain to this day in neighboring Iran and Pakistan.

Since most of those displaced are from the developing world, Western countries have only dealt with this issue periodically and usually at a distance. But with larger numbers and a more mobile world, the scenes in Europe this summer could become more common.

The Terminology For Those Fleeing Home

"Refugee" is the term most commonly used by the United Nations and others.

However, "refugee" is a very specific term in international law, referring to those who have a well-founded fear of persecution based on their race, religion or political affiliation, and not just the general danger of being in a war zone.

If a Syrian fled the city of Aleppo because he was an an outspoken opponent of President Bashar Assad, and felt he was being targeted by the Syrian regime, he would very likely be classified as a refugee and be entitled to protection in another country.

But if a neighbor in Aleppo fled because of the heavy fighting and terrible conditions in the city, he might be classified as an "asylum-seeker" in a European country and would not necessarily be allowed to stay.

Then there are the nearly 8 million Syrians who have fled or been forced from their homes, but have not left the country. They are classified as "internally displaced."

The broadest category of all is "migrants," which covers all those who have fled abroad, often to search for better economic opportunities. The United States, for example, has an estimated 11 million migrants in the country illegally, mostly from Latin America. A much smaller number are classified as refugees or have been granted asylum.

Esme Nicholson in Berlin contributed to this story.