Accessibility links
An Unexpected Revival For A Beloved Russian Poet : Parallels Singer Iris Dement's new album is based on the work of the late Anna Akhmatova, whose spare, insightful lines addressed the ambiguities of love and the tumult of Soviet times. 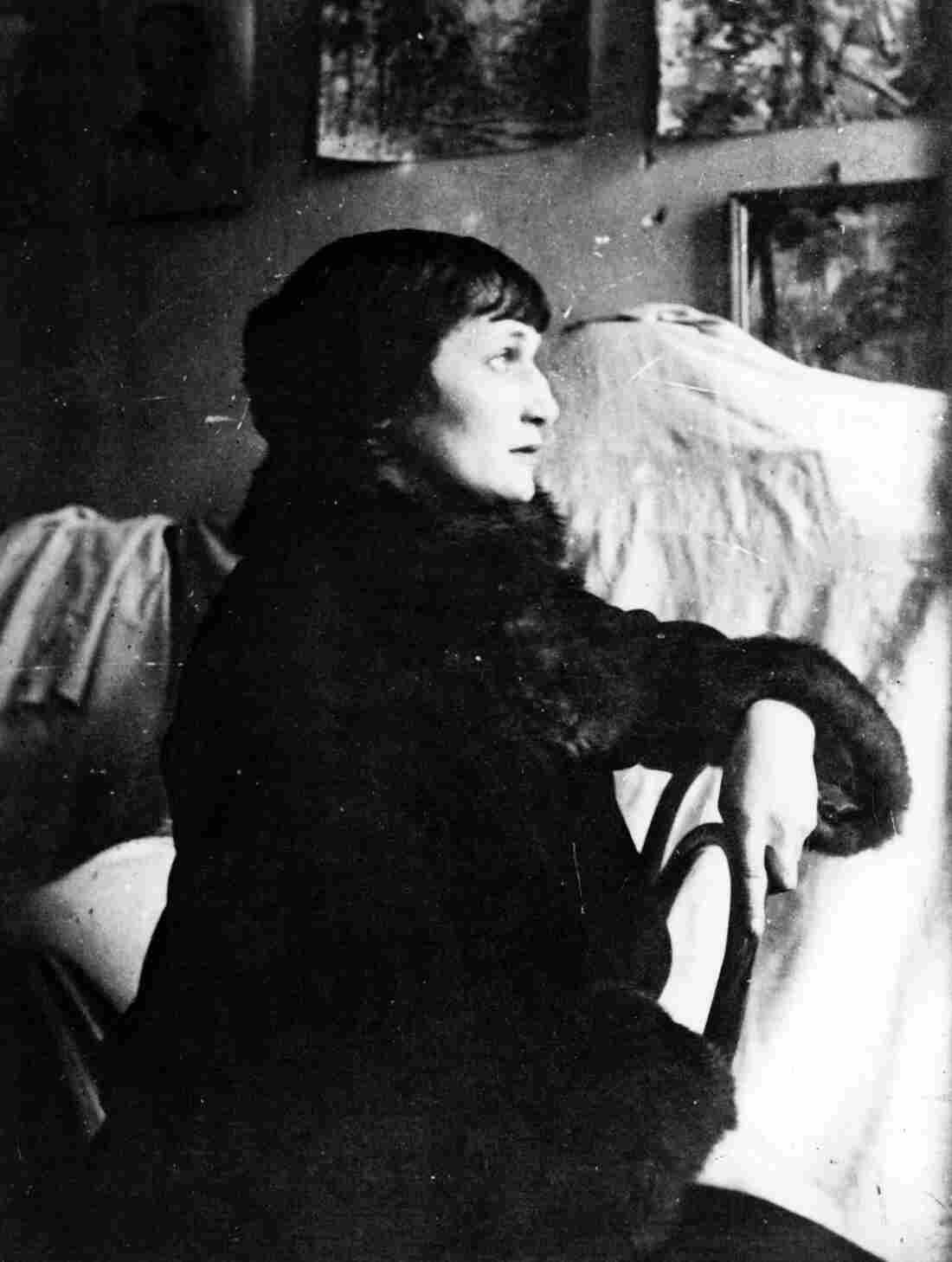 Anna Akhmatova, who lived from 1889 to 1966, was a beacon of artistic courage in the face of repression during Soviet times. Her work is now receiving renewed attention. Fine Art Images/Heritage Images/Getty Images hide caption 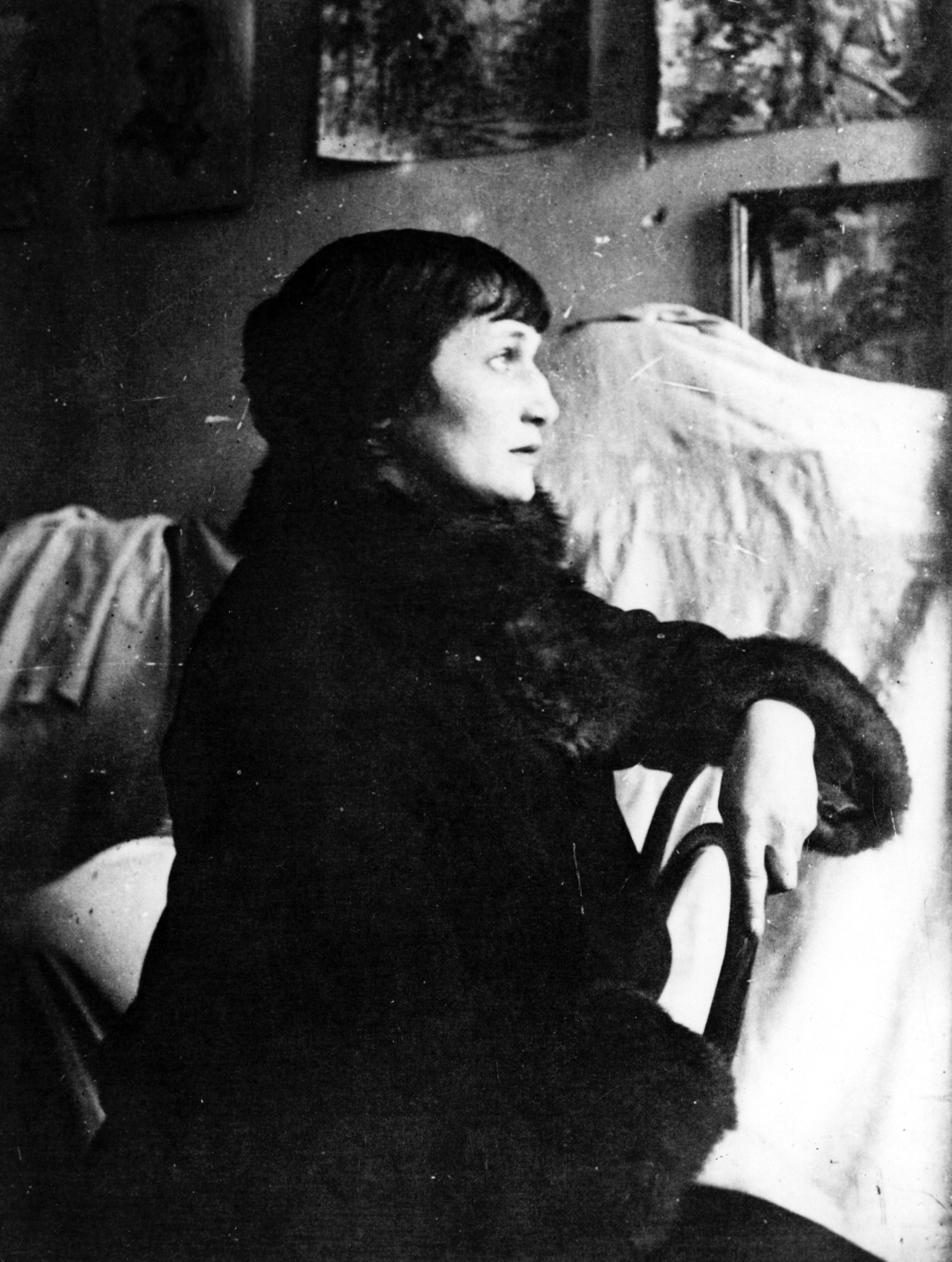 Anna Akhmatova, who lived from 1889 to 1966, was a beacon of artistic courage in the face of repression during Soviet times. Her work is now receiving renewed attention.

Poetry Is Set To Melody In Iris DeMent's 'The Trackless Woods'

There's a surge of interest in the work of 20th century Russian poet Anna Akhmatova. It's inspired in part by American country and folk singer-songwriter Iris Dement, who has an adopted daughter from Russia and has set some of the poet's work to music in a new album, The Trackless Woods.

Akhmatova, born in 1889, witnessed the tumultuous years of the Russian Revolution and lived through the horrors of Joseph Stalin's repressions. She survived as a beacon of artistic courage.

One way to glimpse the poet today is through the St. Petersburg apartment where she lived for some 30 years.

It's a museum now, where guide Maria Nisnikova points out mementos of a woman who moved in glamorous, artistic circles before the revolution, and faced ruthless persecution during the Soviet era.

The building is actually a wing of one of the most beautiful mansions in St. Petersburg, the Sheremetev Palace.

Akhmatova came from an aristocratic background and she knew the splendor of the palace during its pre-revolution days — when it was, as Nisnikova says, "a kind of treasure house with examples of Western European art, ancient Russian icons, armor and ancient manuscripts."

Akhmatova, born as Anna Gorenko, came from a family of Russian and Tatar nobility. The pen name she chose for herself derives from an ancestor who was a Tatar khan, or leader.

A Muse For Artists

She was beautiful, dark-haired and angular, with a prominent hooked nose. Artists loved to draw her in profile, and there are thought to be at least 200 portraits of her — including more than a dozen by the Italian painter Amedeo Modigliani, who fell in love with her in Paris in the early 20th century.

She was a sensation, a celebrity of modernist poetry in what was called the "Silver Age," before the Russian Revolution of 1917.

Twice married and twice divorced, Akhmatova was known for spare, insightful poems about the ambiguities of love. On DeMent's new album, she sings a version of Akhmatova's short poem The Last Toast, which includes these lyrics:

"I drink to the house, already destroyed, to my whole life, too awful to tell.

To the loneliness we together enjoyed, well, I drink to you as well."

At the Akhmatova museum, Nisnikova shows a fading photograph of a young man in military uniform — the last known picture of Nikolay Gumilyov, Akhmatova's first husband.

"He was arrested on the third of August 1921," Nisnikova says, "and he was put into prison and three weeks later, he was secretly executed."

The pair had been divorced by then for nearly four years, but they had a son together. Nisnikova says Akhmatova only found out about Gumilyov's death when she read a list in the newspaper of those condemned and killed by the Bolshevik secret police.

Gumilyov, also a gifted poet, was just one among many of Akhmatova's loved ones and friends who would be shot, sent to labor camps or driven into exile starting in the years of the Russian Revolution through the Stalin era.

In the 1920s, Akhmatova moved into the apartment that ultimately became her museum. She lived with her lover, Nikolay Punin, a noted teacher and art critic. It was a communal flat by then, with multiple families and little space.

Near the entrance, Nisnikova points to a small window with a view of a stairwell. It's the window of the former bathroom. When unexpected strangers appeared at the door, the adults in the apartment would ask their children to climb up on the bathtub, peer out the window and describe the visitors.

This is, Nisnikova says, "the real evidence of the total fear that lived in the hearts of people in our city during the very severe period of mass terror, Stalin's repressions."

The fear was that the strange visitors might be secret police, coming to take someone away.

That fear was realized when Punin was arrested and jailed, along with Akhmatova's son, Lev Gumilyov. The poet became one in a long line of women who waited outside the Leningrad (now St. Petersburg) prison to catch a glimpse of their loved ones or bring them bread.

She later wrote about the experience as one that gave her a new artistic purpose: to be a witness to history. She spent 17 months waiting in prison lines.

One day, someone approached her.

"On this occasion, there was a woman standing behind me, her lips blue with cold, who of course had never in her life heard my name," Akhmatova recalled. "And then she asked me, 'Could one ever describe this? I answered her, 'I can.'"

Akhmatova kept her promise with the cycle of poems called "Requiem." She composed it in secret, and at one point was even afraid to keep a manuscript. She wrote down fragments for her friends, who memorized them. The fragments were then burned. "It was like a ritual," her friend Lydia Chukovskay recalled. "Hands, matches, an ashtray. A ritual beautiful and bitter."

"Requiem" wasn't published in the Soviet Union until more than 20 years after Akhmatova's death, but it became well known among her friends and admirers.

She dedicated "Requiem" to the victims of Stalin's terror. It includes these lines:

"(And if ever in this country
They decide to erect a monument to me,

I consent to that honor
Under these conditions — that it stand

Neither by the sea, where I was born:
My last tie with the sea is broken,

Nor in the tsar's garden near the cherished pine stump,
Where an inconsolable shade looks for me,

But here, where I stood for three hundred hours,
And where they never unbolted the doors for me)."

Anna Akhmatova — and her son — outlived Stalin and many of his henchmen, and she won recognition from generations of younger poets who came after her.

She died of a heart attack in 1966, when she was 76. Forty years later, a statue of her was erected in St. Petersburg, across from the prison where she and countless others used to wait.