Accessibility links
A Race To The Far Right In Hungarian Politics : Parallels Hungary's ruling party has co-opted the anti-immigrant rhetoric of the far-right Jobbik Party. The result: Poll numbers surge for the government as voters feel no need to support the fringe. 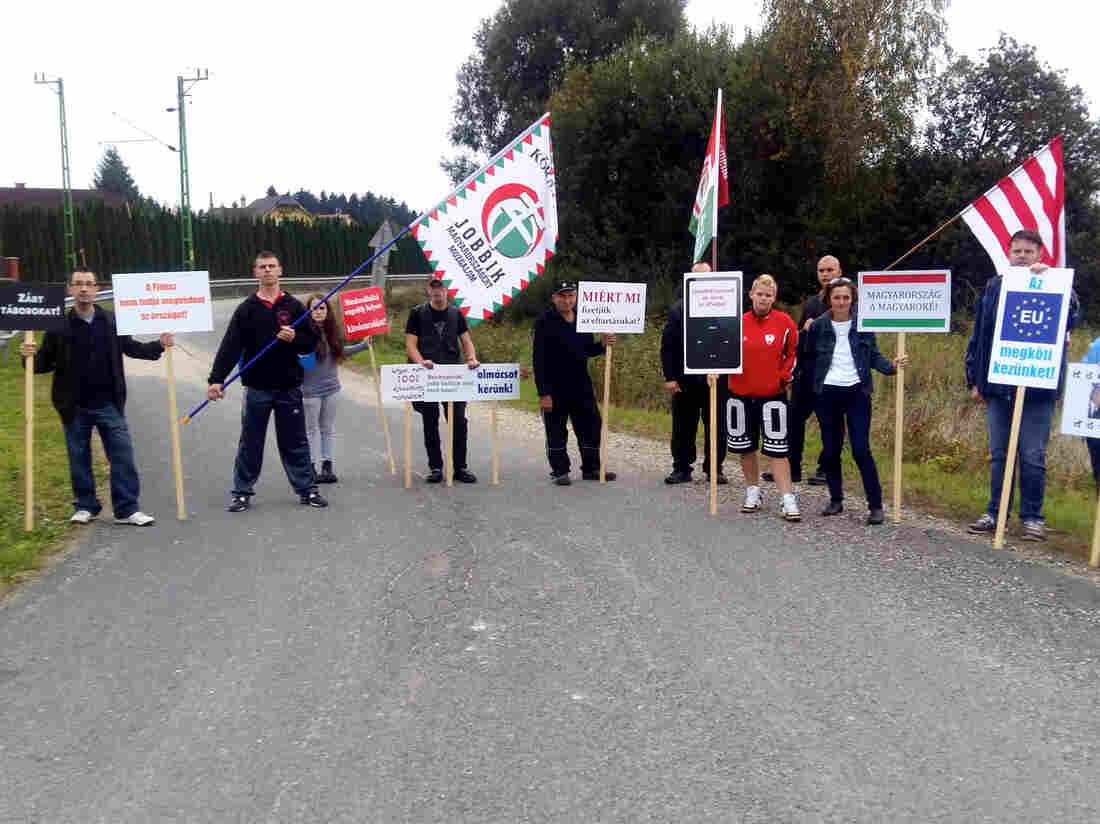 About 20 people wave anti-immigrant placards and flags at a Jobbik rally last Tuesday in Szentgotthárd, a rural factory town near Hungary's border with Austria. Lauren Frayer for NPR hide caption 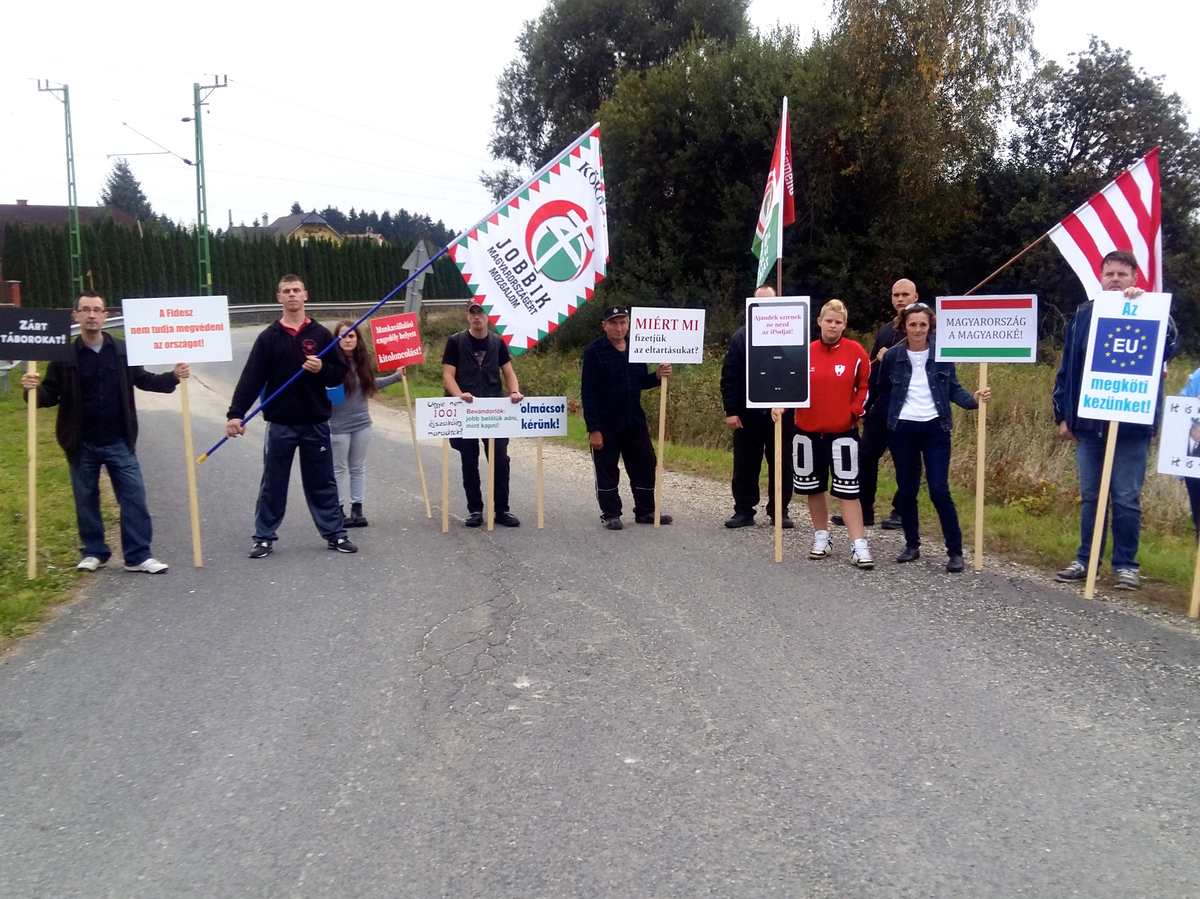 About 20 people wave anti-immigrant placards and flags at a Jobbik rally last Tuesday in Szentgotthárd, a rural factory town near Hungary's border with Austria.

One afternoon last summer, economics professor Gyorgy Malovics opened his mailbox at home in the leafy provincial town of Szeged, in southern Hungary, where he lectures at the local university.

Inside, he found a two-page letter from Hungary's prime minister, Viktor Orban, along with a questionnaire. The packet was mailed to every Hungarian household. The questions asked citizens how they believe the government should handle Europe's migration crisis.

"Basically, it framed the whole question as, 'We have to protect ourselves against people who come here for economic reasons and to carry out terrorist acts,' " Malovics recalls. "For me, to be honest, it was shocking. I'm aware of how dirty or dark politics can be. But I was still surprised that the Hungarian state could officially use such language."

As Hungary Seals Its Borders, A Rush To Make It Across

The prime minister's letter opened with a warning of Charlie Hebdo-style killings in Hungary. The first question mentioned ISIS.

Malovics says he'd heard that rhetoric before — but only from Jobbik, the far-right, anti-immigrant, anti-Semitic party that now has the second-largest bloc in Hungary's parliament after the ruling Fidesz party.

About 1 million Hungarians filled out Orban's questionnaire and sent it back. The government says their answers are the basis for its hard-line policy against migrants — building fences and using force to keep them out.

This fall, new billboards along Hungarian highways read: "The people have decided. The country has to be protected."

Meanwhile, the prime minister's right-wing party, Fidesz, has surged in the polls.

Hungary's crackdown on migrants has been a boon to the government's popularity. It's co-opting messages from the far-right Jobbik party — and winning. By moving to the right, it seems to be putting the far-right fringe out of business.

When Jobbik organized an anti-immigrant rally last week in Szentgotthárd, a rural factory town near the Austrian border, only about 20 people showed up. Guarded by police, they waved anti-European Union placards and Jobbik flags. 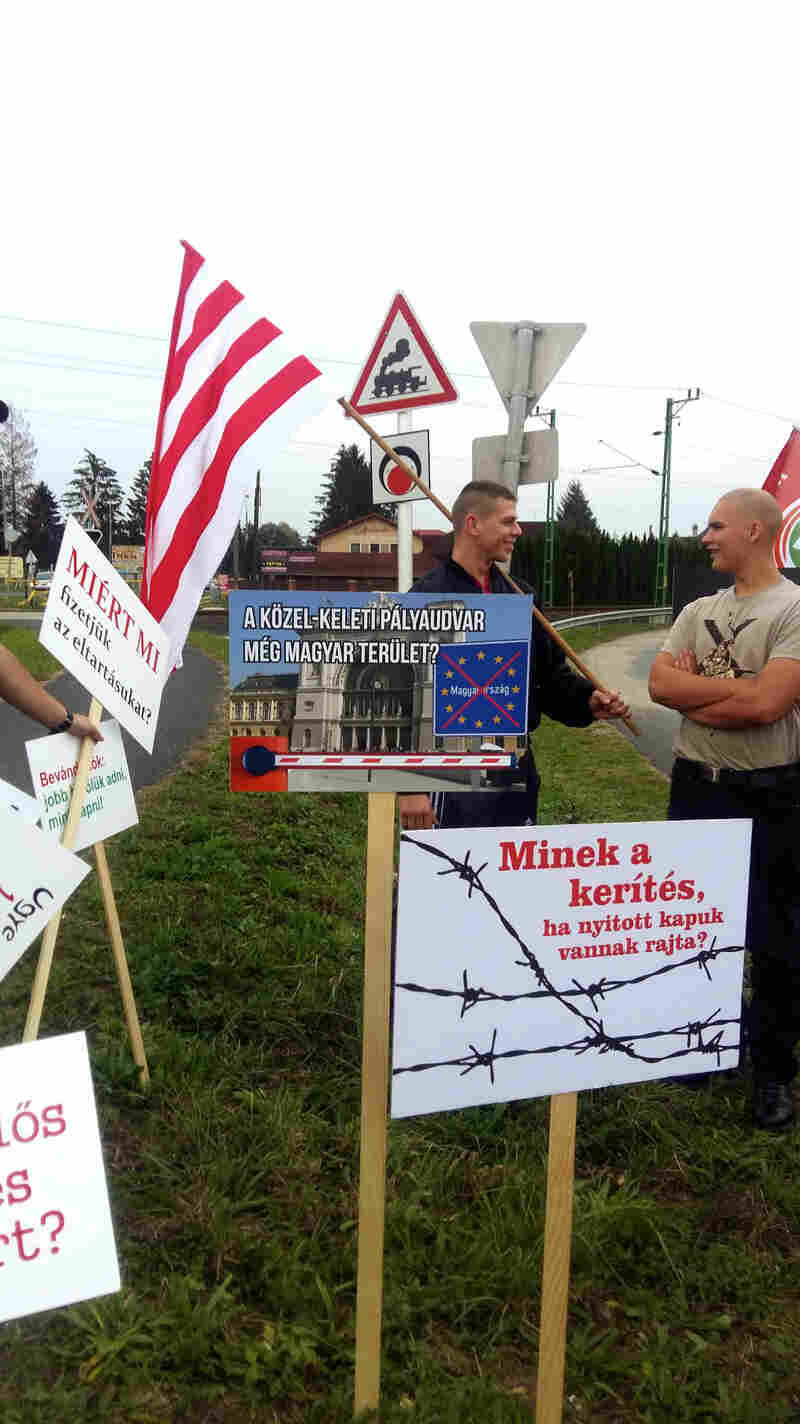 Anti-immigrant placards at a Jobbik rally read "Why have a fence if the gates on it are open?" (lower right) and "Is this a Middle Eastern train station or is it Hungarian?" (center). Lauren Frayer for NPR hide caption 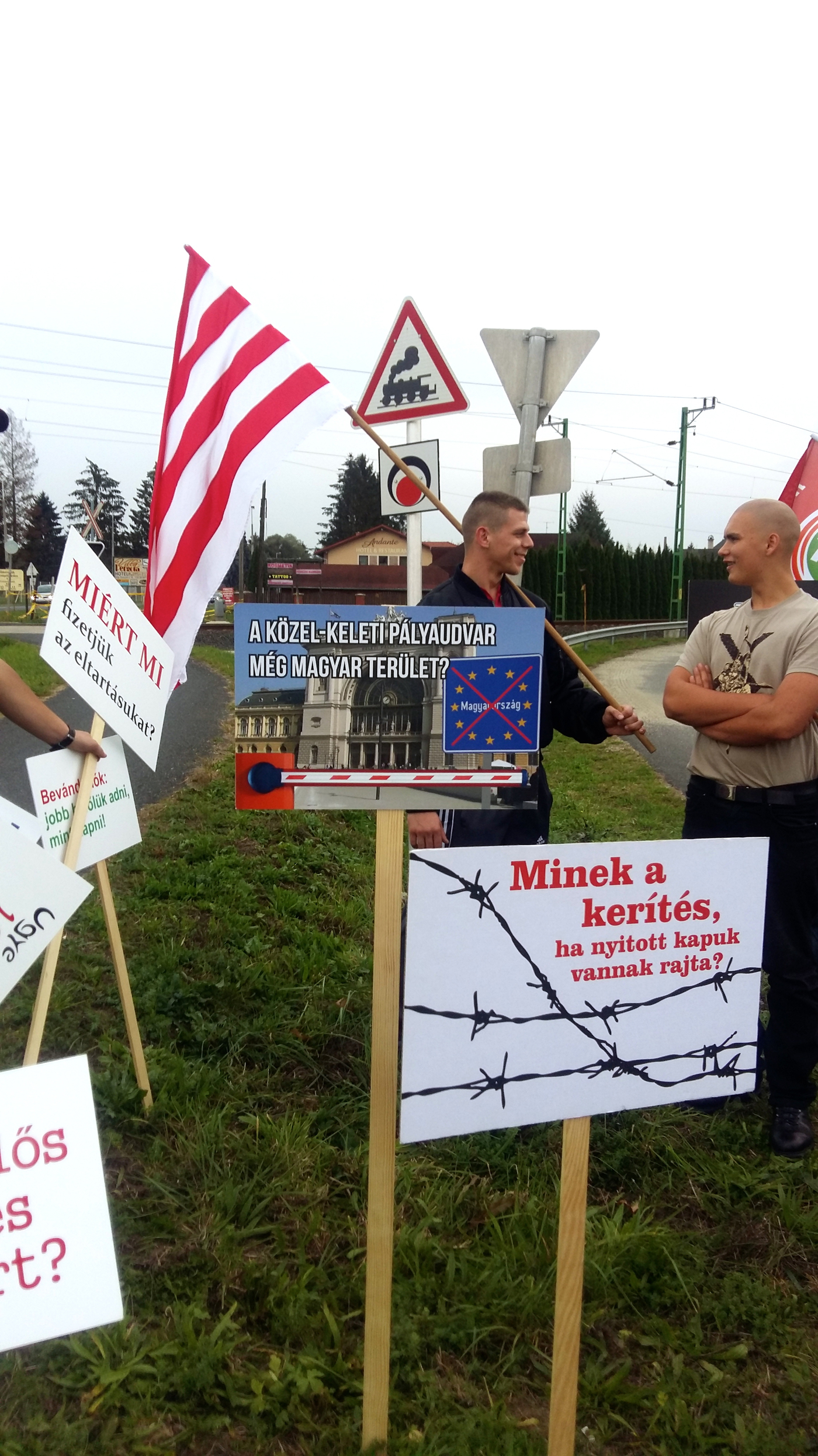 Anti-immigrant placards at a Jobbik rally read "Why have a fence if the gates on it are open?" (lower right) and "Is this a Middle Eastern train station or is it Hungarian?" (center).

One sign read, "Why have a fence if the gates on it are open?" — in reference to how some migrants are still allowed to pass through openings in Hungary's border fences. Another bore a photo of Budapest's Keleti train station — crowded with Middle Eastern migrants last month, awaiting trains to the Austrian border — with a caption saying, "Is this a Middle Eastern train station or is it Hungarian?"

A Jobbik lawmaker, Adam Mirkoczki, told the crowd at the Szentgotthárd rally that most of the more than 350,000 migrants who've entered Hungary this year are actually Muslim fighters here to wage jihad. People nodded their heads, saying, "Yes, the government warned us about them!"

"Fidesz asked us to stand with them on the issues most important to the nation, and we did," Mirkoczki told the crowd. "And then they stabbed us in the back!"

He's upset that Fidesz has co-opted an issue — fear of migrants — that has long been his party's centerpiece. Hungarian politics is suddenly a race to the far right.

"We're all upset Fidesz is taking our issues," says Lajos Deak, another Jobbik supporter at the rally. "We identified ourselves as right-wing radicals first. And now, the big mainstream party is radicalizing."

This tactic seems to be working for Fidesz, even in the progressive college town of Szeged. Some young Fidesz supporters here say they'd never consider voting for Jobbik.

"Jobbik has quite a bad reputation," says graduate student Istvan Kiss, 24. "They also don't have the experience that Fidesz has in governing."

Kiss says he thinks Jobbik members are far-right radicals. But when their same anti-immigrant message comes from the prime minister, he's more open to it, he admits.

"I support our prime minister because I think Mr. Orban is one of the persons who can really protect the borders," he says. "The question you have to decide is to protect the borders or to be politically correct for Europe — that's the question [the Fidesz] party had to consider. I think Europe did not realize so many immigrants would come. We were the first country on the border; we realized it more quickly."

If Orban and Fidesz coopted Jobbik's anti-immigrant rhetoric, it was a smart political move, Kiss says.

"They stole this issue. But if it was a good idea, then why not steal it?" he says. "Even if Jobbik hadn't said it first, I think our prime minister would have done the same."

He says other mainstream political parties across Europe should take a page from Orban's playbook — and move to the right — if they want to win elections and stay in power.