Accessibility links
India's Ban On Beef Leads To Murder, And Hindu-Muslim Friction : Parallels A Muslim man was lynched by a village mob that accused him of killing a cow. As Hindu nationalists gain ground, critics say they are threatening Indian traditions of pluralism. 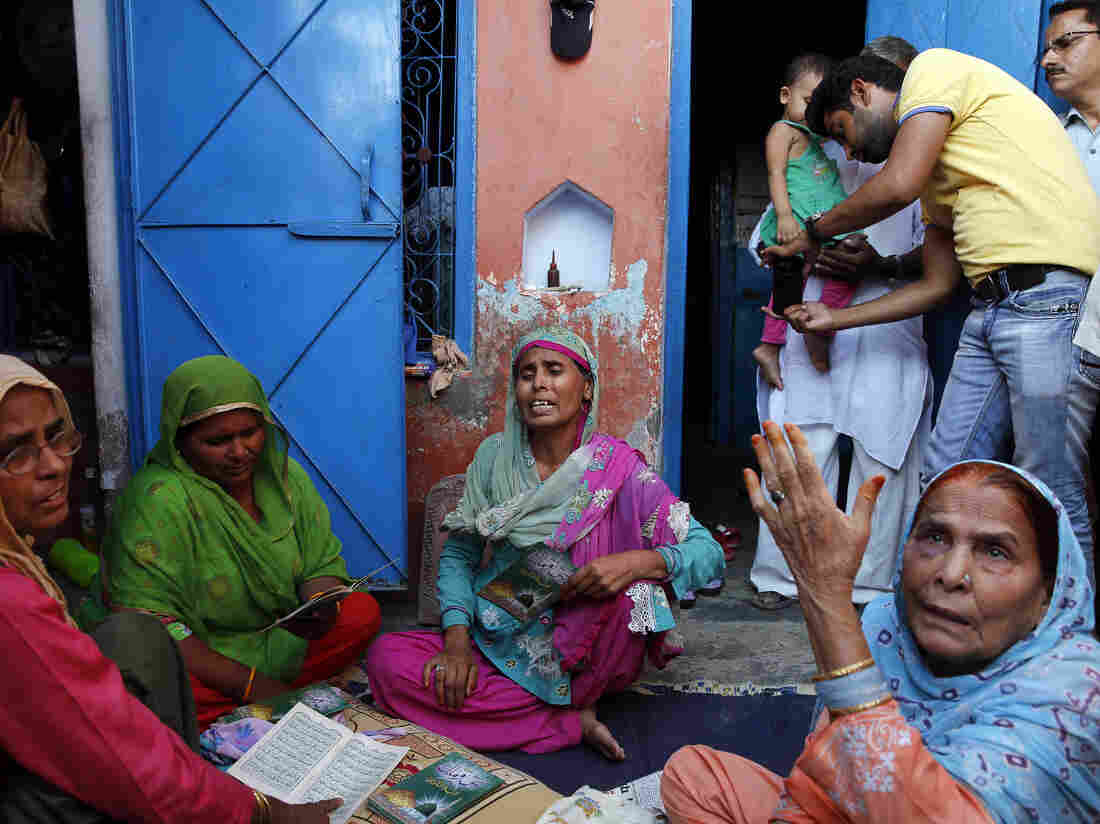 Relatives mourn Mohammad Ikhlaq Saifi in his village outside New Delhi last month. The Muslim man was lynched, allegedly by a Hindu mob, after he was accused of killing a cow. Manish Swarup/AP hide caption Relatives mourn Mohammad Ikhlaq Saifi in his village outside New Delhi last month. The Muslim man was lynched, allegedly by a Hindu mob, after he was accused of killing a cow.

India's "sacred cow" is at the center of a gathering storm.

Voices calling for more and stricter enforcement of state bans on the slaughter of cattle have grown more strident — and most recently, deadly.

Any tension in the village of Bisahra, two hours outside Delhi, was masked one morning last week by songbirds and the sweetness of small boys holding hands and marching barefoot in the dust. Donkeys dragged overloaded carts of hay while school-age girls hauled earthen containers on their heads. Across the road, a woman bathed a water buffalo as the beast bleated at the cascading water in the heat.

It's a hypnotic tableau of Indian village life. The conspicuous presence of the Rapid Response Force of the Uttar Pradesh State Police, however, suggested something more sinister.

A state ban prohibits cattle from being slaughtered in Uttar Pradesh. One night, just over two weeks ago, young men in this predominantly Hindu village found dogs sniffing at what looked like meat. A rumor quickly spread that it was beef. A forensic report later showed it was mutton. Muslims are habituated meat eaters, while the Hindu faithful who are the majority consider the cow holy and thus off limits.

Minutes after the meat discovery, Mohammad Iklakh Saifi, a middle-aged father, was set upon. A Muslim accused of killing a cow, Saifi was beaten to death by a mob, allegedly Hindus. He made a last, desperate call to a Hindu friend, schoolteacher Manoj Shishodia.

"He told me 10 to 12 people had swarmed his home and to call the police," Shishodia says. By the time he reached Saifi, his friend's body lay pummeled and "covered in blood."

Eight are now in custody for the crime. 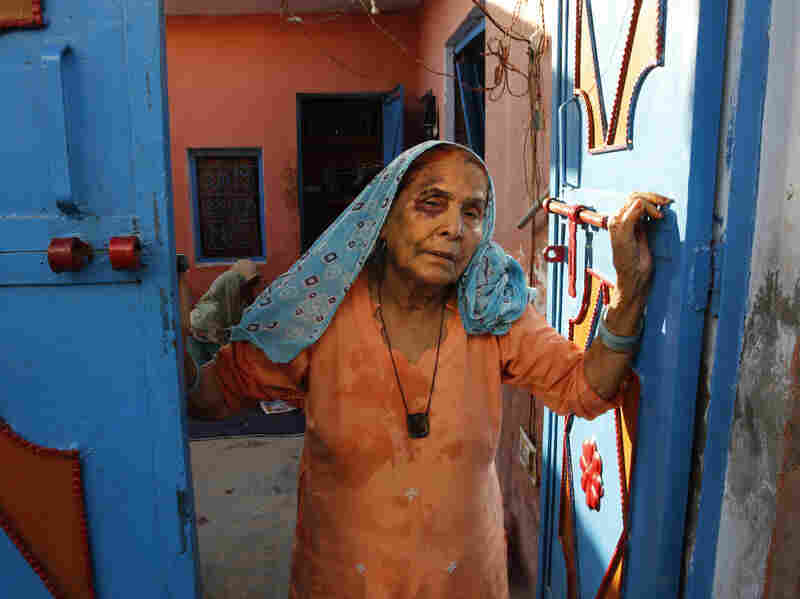 Asgari Begum, 75, was assaulted and bruised during the mob attack that left her son, Mohammad Ikhlaq Saifi, dead, after he was accused of killing a cow. Manish Swarup/AP hide caption 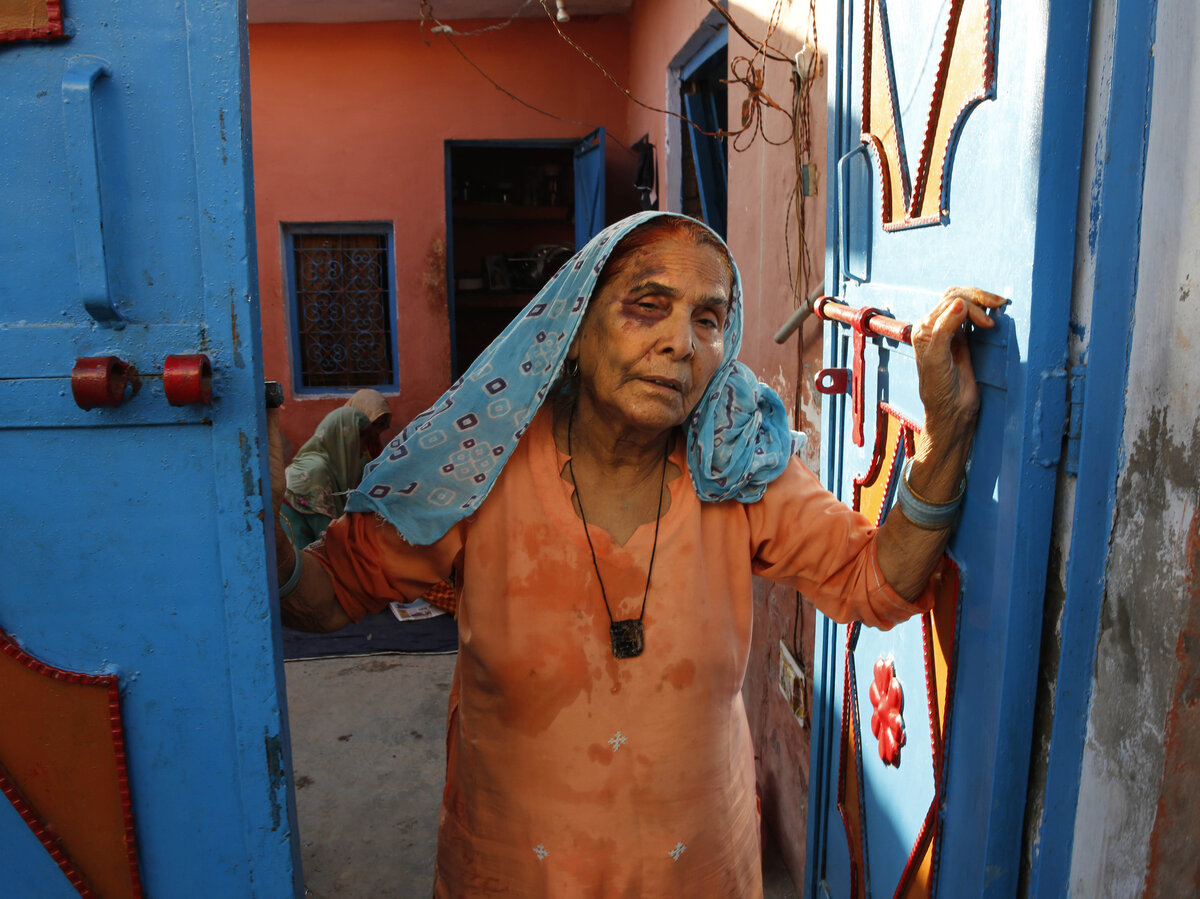 Asgari Begum, 75, was assaulted and bruised during the mob attack that left her son, Mohammad Ikhlaq Saifi, dead, after he was accused of killing a cow.

Women in the village, angered by the media spotlight that followed the murder, have attacked visiting journalists. On the condition that there be no recording, nervous police permitted us passage to the lynched man's home.

Inside the small house, Saifi's 75-year-old mother, Asgari Begum, sat with a black eye and a bruised neck.

Overturned appliances, including a refrigerator, testify to a rampage. "They beat us with bricks, clubs and sticks, and dragged my son away," she said, sobbing. "We cried for help, but no one came."

Her grandson, Danish Saifi, 22, was rushed to the Kailash Hospital, an hour away, with severe head injuries. His older brother, Sartaj Saifi, 27, kept vigil at the hospital. A technician with the Indian Air Force, Sartaj Saifi says his family has lived peaceably in the village for generations, but now they fear for their lives. He says the Air Force has offered to move them out.

"Many religions live in India and we don't want to hurt each others' sentiments — but when they are hurt, that cannot justify murder," he says. "It's easy to find a piece of meat in any Muslim home, especially after Eid, spread rumors that it's beef and inflame feelings that could engulf the village, then the whole country."

Today, "save the cow" vigilante groups waylay trucks in Delhi suspected of transporting beef. In Kashmir, India's only Muslim-dominated state, beef bans are deepening animosity in a place already riven with tension.

Officials in Prime Minister Narendra Modi's ruling BJP party have tried to play down the murder. Modi's culture minister deemed Saifi's death at the hands of a mob "an accident."

The party spokesman, Nalin Kohli, says India "has voices of every hue and color." He insists those accused of making inflammatory remarks after the attack do not represent the dominant voice of the BJP.

But Shashi Tharoor, a former diplomat and now an opposition member of Parliament, warns of a growing "reflexive desire to ban one thing or another" in India. "Suddenly, this is no longer a matter of individual taste," he says, but of public policy — "which it should not be."

Bans on beef, he says, are "about the right of some people to determine what other people may or may not eat" — but in a place as diverse as India, "it makes no sense to imagine a standard that can be imposed on others."

Meanwhile, at least 15 renowned Indian writers have returned literary prizes bestowed on them to protest what they call the country's "rising intolerance." Poet Ashok Vajpeyi says Hindu nationalists are using "bans, suspicion and hurt feelings" to stoke religious bigotry in the name of "tradition."

"There can't be a bigger insult to the Indian tradition," he says, than this growing intolerance. "The Indian tradition for millennia has been accommodative, open. It is a multireligious tradition, a multilingual tradition. And that plurality is now being under assault."

President Pranab Mukherjee issued a statesman-like appeal to protect India's composite and plural makeup. Modi had been silent until the president's remarks. Once he chose to weigh in, he appealed for unity, invoking the president's message but without specifically mentioning the brutal killing of Saifi.

In Bisahra, at least, the Hindu and Muslim communities have used two weddings to start mending their wounds. This past weekend, they jointly arranged the marriage of two Muslim sisters. The women's father said he was overwhelmed by the support. Hindus "had arranged for food, tents and even some funds," he said. The party was an all-vegetarian affair.