Accessibility links
With A New Trade Zone, Cuba Reaches Out To Investors : Parallels In the port of Mariel, Cuba is creating a huge enterprise zone intended to encourage trade and welcome foreign businesses. Some companies are eager to jump in. The Americans sound a bit skeptical. 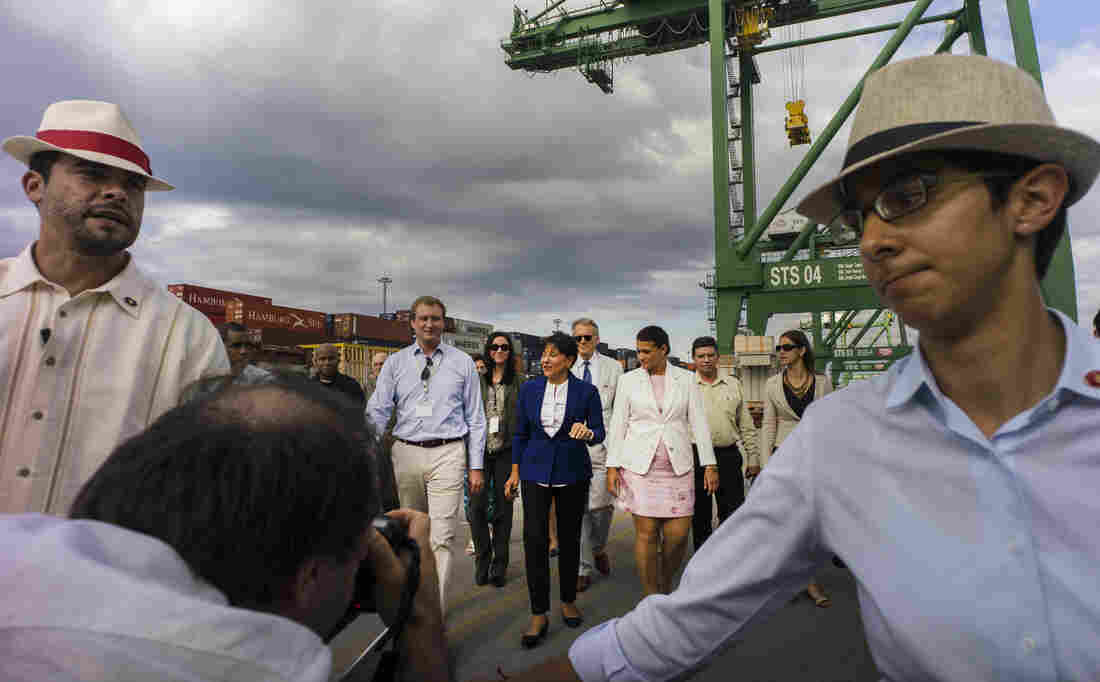 U.S. Commerce Secretary Penny Pritzker (in blue jacket), visits the container port at the Special Enterprise Zone in Mariel, Cuba, on Oct. 6. Cuba is creating the zone to encourage trade and foreign investment. Some foreign companies are eager to move in, though the Pritzker said Cuba's commitment to free trade was not year clear. Ramon Espinosa/AP hide caption 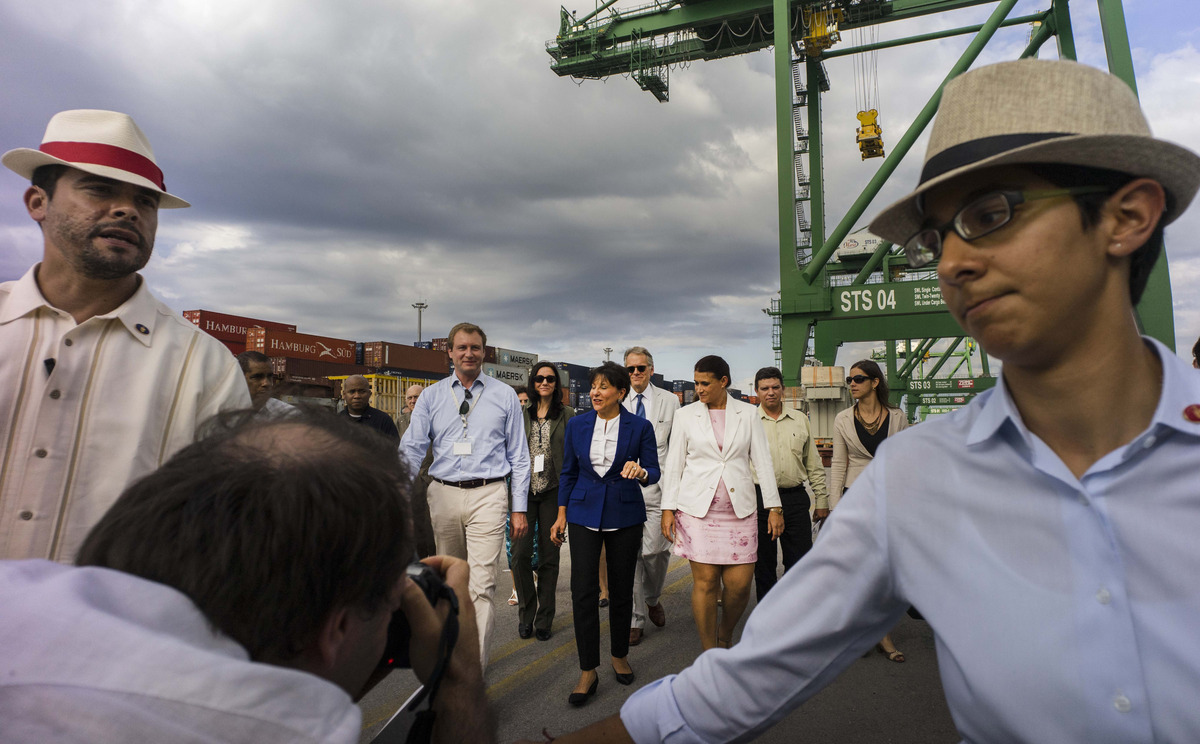 U.S. Commerce Secretary Penny Pritzker (in blue jacket), visits the container port at the Special Enterprise Zone in Mariel, Cuba, on Oct. 6. Cuba is creating the zone to encourage trade and foreign investment. Some foreign companies are eager to move in, though the Pritzker said Cuba's commitment to free trade was not year clear.

If you could start selling something in Cuba that would be a sure-fire money maker, what would it be?

Probably something that hasn't been widely available for more than 50 years in the state-controlled economy. A product for which there's pent up demand and one that would surely spruce up the place after decades of neglect.

He has an automated paint factory outside Mexico City, where a giant injector fills metal cans with basic white primer. About 20 percent of Murow's current production goes to Cuba.

But come next year he's banking on selling even more, while also saving shipping costs and import fees. His company is one of the first companies to be approved as a tenant in Cuba's new Special Enterprise Zone.

"We've been working in the Cuban market for a while, we know it," says Murow.

When the opportunity came up to manufacture in the free trade zone in the port of Mariel, Murow says he jumped on it.

A New Image For Mariel

Mariel, 30 miles west of Havana, is probably better known for the mass boat lift in 1980, when more than 100,000 Cubans were allowed to leave and headed to Florida.

But today a steady stream of tractor trailers roll into the brand new port. At a cost of $1 billion, and financed mostly by Brazil, it will eventually cover 180 square miles and will be able to handle up to 4 million cargo containers a year. And in the free-trade zone, foreigners can claim 100 percent ownership of their companies and enjoy huge tax breaks.

"I think it's going to bring a lot of advantages to the country. It's a grand development," says electrician Roberto Gonzalez Chacon on his way to work.

Workers now in the port make far more than the average monthly wage in Cuba of about $20. One crane operator told me he takes home about $300 a month.

"All this development is going to raise Cuba's standard of living, which will raise our own purchasing power," says Omar Eveleny Perez, an economist at the University of Havana.

But he warns that the U.S. embargo remains a major issue. One of the biggest obstacles to foreign shippers is that if they dock in Cuba's ports they're then barred from entering the U.S. for six months unless they get a waiver from the Treasury Department.

There are additional issues making foreigners nervous about taking the Cuban plunge. There is, for example, uncertainty over how and when the state will loosen its tight grip on the economy.

During a fact-finding trip to the enterprise zone earlier this month, U.S. Commerce Secretary Penny Pritzker told NPR that Cuba's commitment to freer trade is still an open question.

"I think the Cuban government is in an evolution, and how fast that change is, or exactly where that change is going, is still not totally clear," Pritzker said.

Foreign companies are concerned about the cumbersome bureaucracy and employment rules that say all workers for the free-trade factories must be hired through a Cuban agency and paid at state-controlled wages.

Enrique Palacios was hired by the Cuban employment firm to run a Mexican paint company in the free-trade zone. He says foreigners shouldn't doubt that they'll make profits, but Cuba must benefit too.

"We are not capitalists," Palacio says during an interview in a large conference room at Devox Paint's Havana headquarters. A huge mural of Fidel Castri and Che Guevara fill one wall. "We are happily entering into this new era," he says, but adds, "we will continue to defend our interests as well."