Accessibility links
London's Cabbies Say 'The Knowledge' Is Better Than Uber And A GPS : Parallels The drivers of London's licensed black cabs must memorize every street to navigate the city. In the era of Uber and GPS, this tradition is under threat. 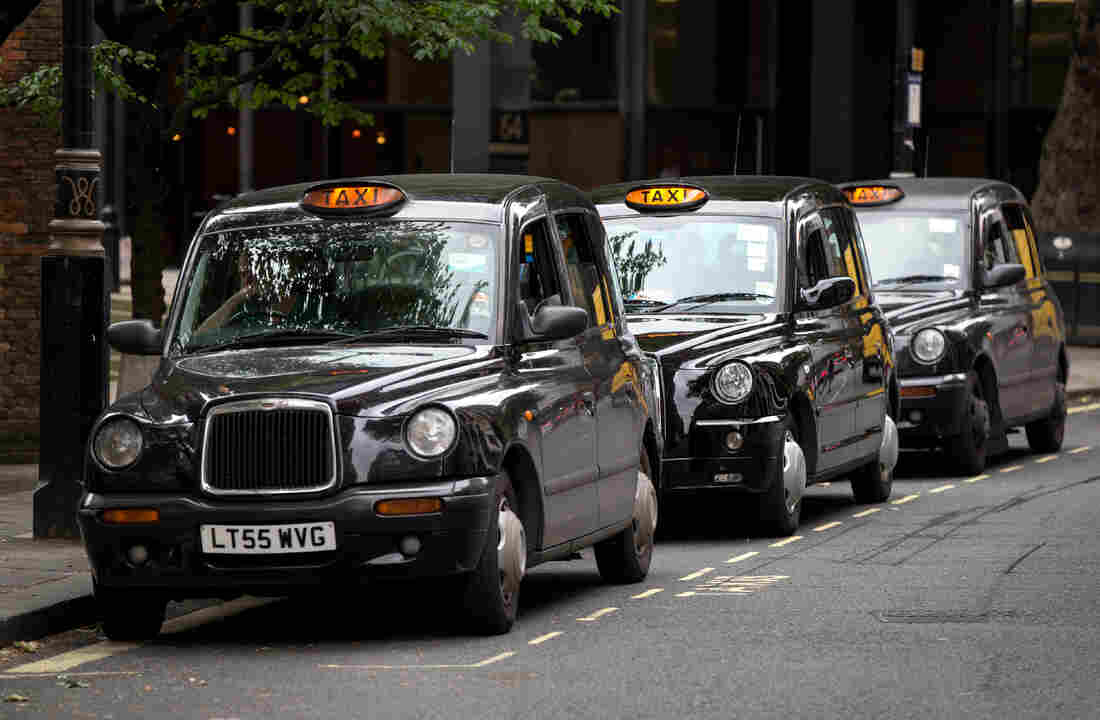 Taxis wait in London in June 2014. By law, the drivers of London's black cabs must memorize all of the city's streets, a process that takes years of study. The taxi drivers are opposed to Uber and drivers using a GPS, but the High Court ruled in favor of Uber last week. Oli Scarff/Getty Images hide caption 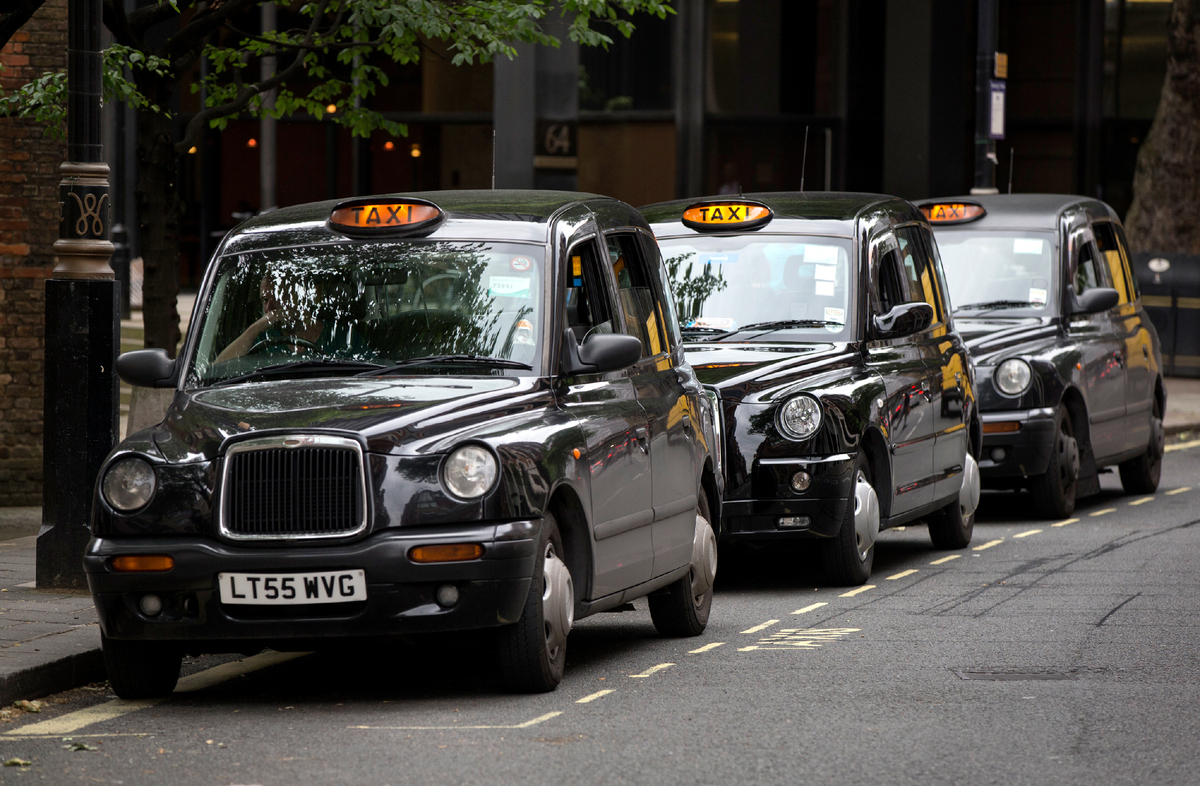 Taxis wait in London in June 2014. By law, the drivers of London's black cabs must memorize all of the city's streets, a process that takes years of study. The taxi drivers are opposed to Uber and drivers using a GPS, but the High Court ruled in favor of Uber last week.

Getting into the back of a black taxi is the quintessential London experience. Name any spot in Britain's capital and the driver knows exactly where to go and how to get there as fast as possible. This is "The Knowledge." Every cabbie must master it, and it takes years to learn.

For 150 years, drivers have known all the city's streets by memory and passed tests requiring years of study. Now it just takes Uber and a GPS to get around — and this has unleashed a major battle that pits a London tradition against a company challenging the taxi industry worldwide.

Last week, the taxi drivers lost a legal case against Uber, but they're persevering.

Brian Nayar, a Knowledge instructor who still drives his own black cab, talks to us as we ride in the back of his taxi.

"I haven't stopped from the moment I got on that bike to go to Manor House station, we're talking 13 years, 14 years, nearly," he says, describing the first place he went to start learning The Knowledge. "I've just immersed myself in it. I absolutely love it."

He cites scientific studies showing that the brains of people who learn The Knowledge change: The parts linked to memory grow.

But Nayar is worried. He says that Uber is hurting the industry he loves.

"There are companies, you mention Uber, where as far as I'm concerned, they're circumventing the law," he says. "They're using technology to break the law." 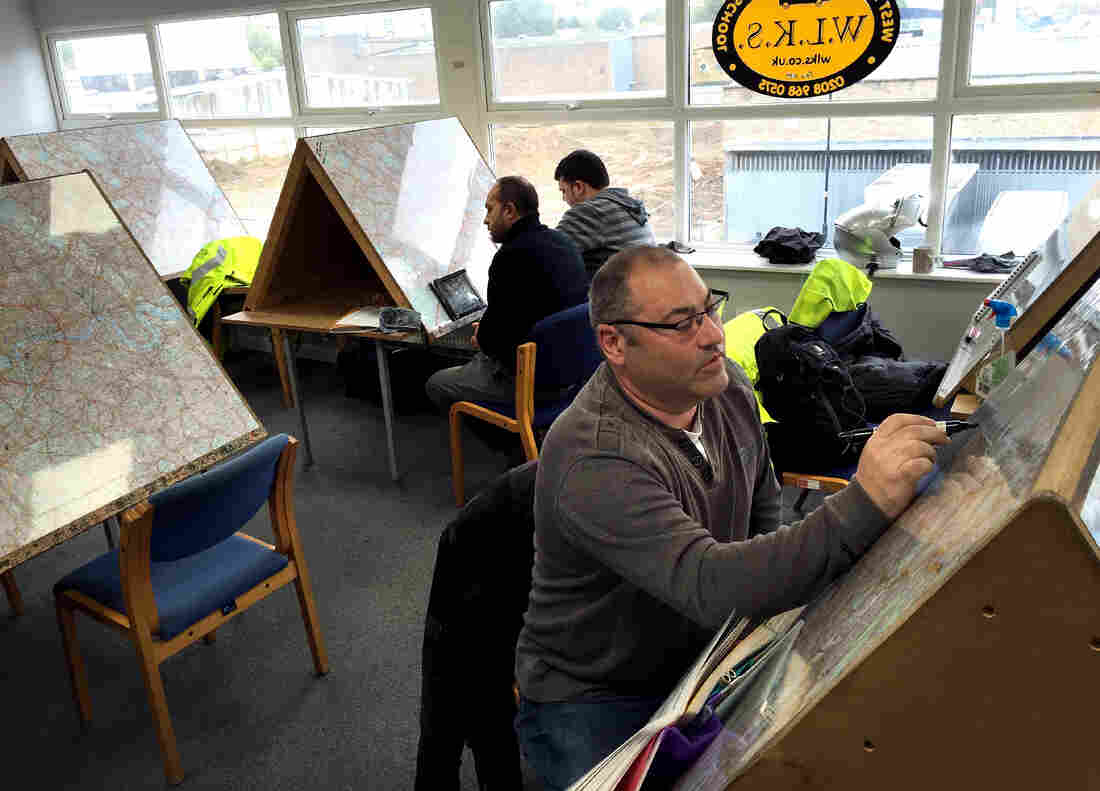 Rob Zappone has been studying The Knowledge for two years. He's memorized 320 "runs" so far, which is considered the skeleton of The Knowledge. Leila Fadel/NPR hide caption 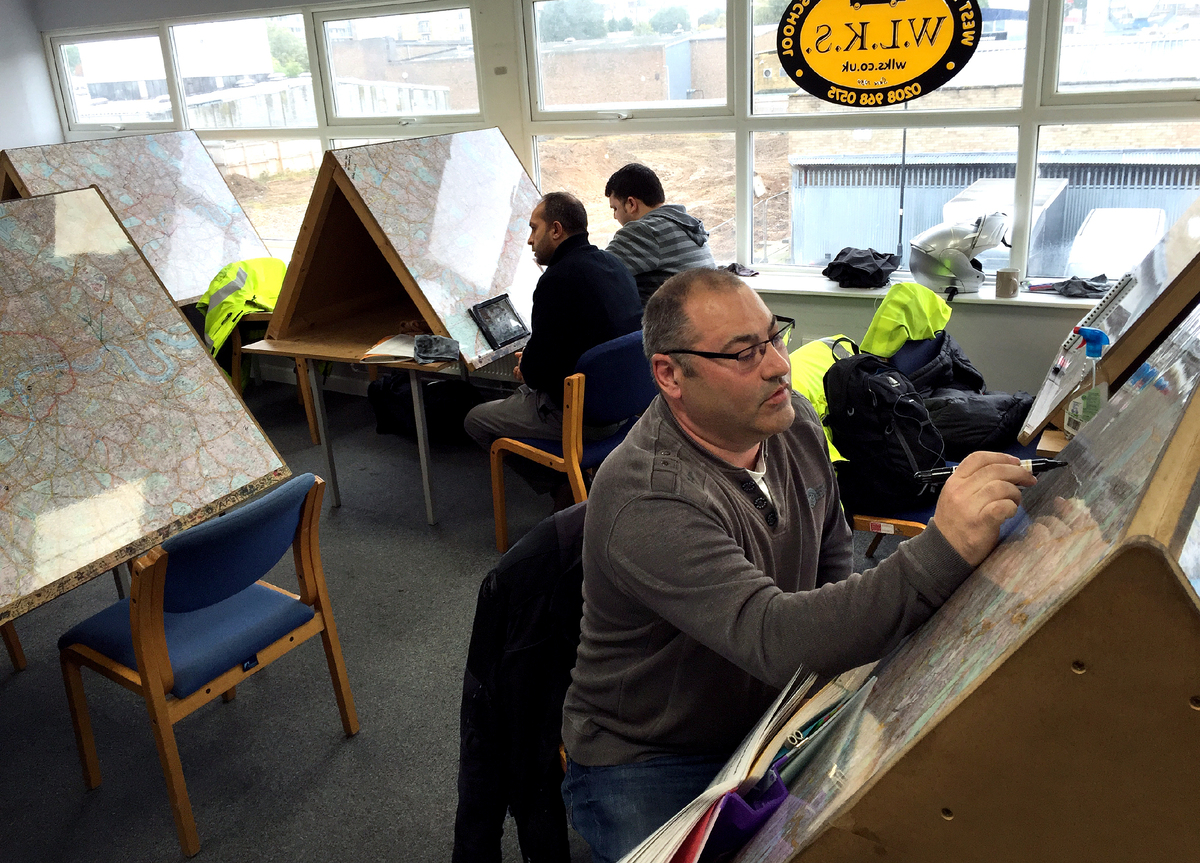 Rob Zappone has been studying The Knowledge for two years. He's memorized 320 "runs" so far, which is considered the skeleton of The Knowledge.

Taxi associations contend that Uber's online car-booking app is the same as a meter and is cheating the system. If you drive a car with a meter in London, then you have to have passed The Knowledge exams and hold a special license.

An Uber spokesman says the company is "bringing competition to a market that has been relatively competition-free for decades." And competition, he says, always makes things better for customers.

As the battle continues, London taxi drivers say Uber is undermining an important British tradition dating back to 1865, when taxis were first regulated. Of course, back then they were horse-drawn carriages.

On average, it takes more than three years to learn The Knowledge. Aspiring taxi drivers start the journey at places like the West London Knowledge School, one of several teaching programs in the capital. 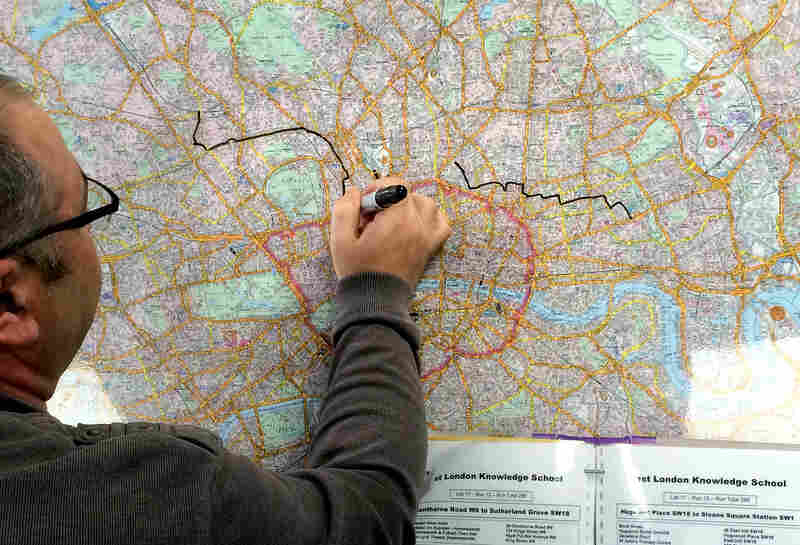 This is "penning up" — trainee drivers recall routes from memory and draw them on the map. Rich Preston for NPR hide caption

First, they flit around the city on mopeds, learning the streets, and then spend months in rooms hunched over large, laminated maps. They draw routes with marker pens and then close their eyes and call out directions from the image in their mind. They're building a mental map that will help them pass stiff tests and get the coveted green badge to allow them to drive a metered black taxi.

Rob Zappone, one of the students, leafs through a book of runs he needs to memorize.

"At the moment, what I've done so far is I've completed all 320 runs, which is basically the skeleton of The Knowledge," he says.

Memorizing every nook and cranny of this ancient city, as well as being able to point out places of interest, is hard. London is not designed on a grid like New York. The roads are winding and confusing.

And then it's months of practice, listening to instructors in classrooms like this one, in preparation for a long series of oral tests with examiners from the city's transport administrator.

An instructor calls out two random points in the city and asks them to call out the route from memory. Recruits are expected to know the best way to get from one to the other. 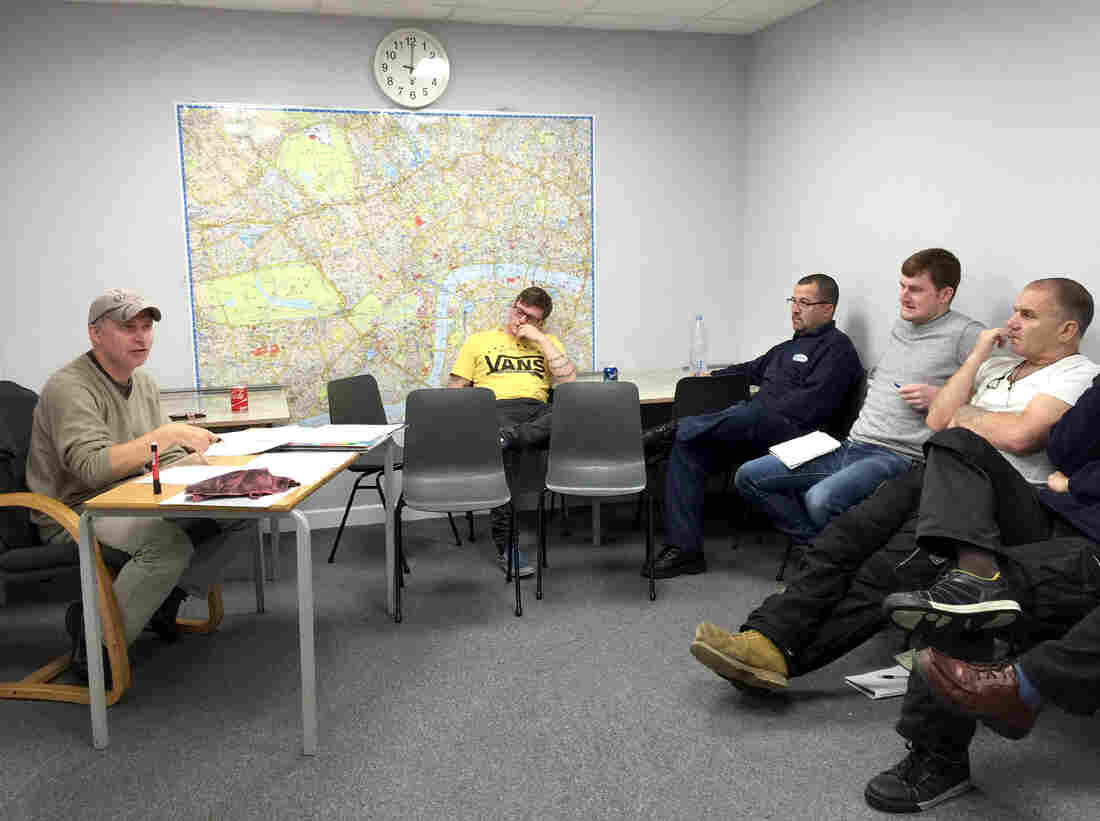 Students of The Knowledge are tested in a classroom by experienced drivers. Leila Fadel/NPR hide caption

"What do I always say to you? Go with your first instincts," says the instructor. "That's the way The Knowledge works, matey."

The student starts to call out lefts and rights — until he accidentally takes a right on a street that you can't take a right on.

If this were a test, the student would fail. He'd have to try again.

For Nayar, it's all part of a great British tradition that is more meaningful than simply relying on technology for navigation.

"I drive a London taxi, but I'm also an ambassador for this great city that we work and live in, and you can't get that from a GPS," he says.

He puts on the meter and drives me back to the office. He points out landmarks, tells stories about London and then drops me off exactly where I asked — without ever having to check a map.