Accessibility links
For China, Japan And S. Korea, Just Meeting Is An Accomplishment : Parallels Leaders of the three countries gather in Seoul to talk over trade potential and attempt to put aside longstanding tensions over history and territorial matters. 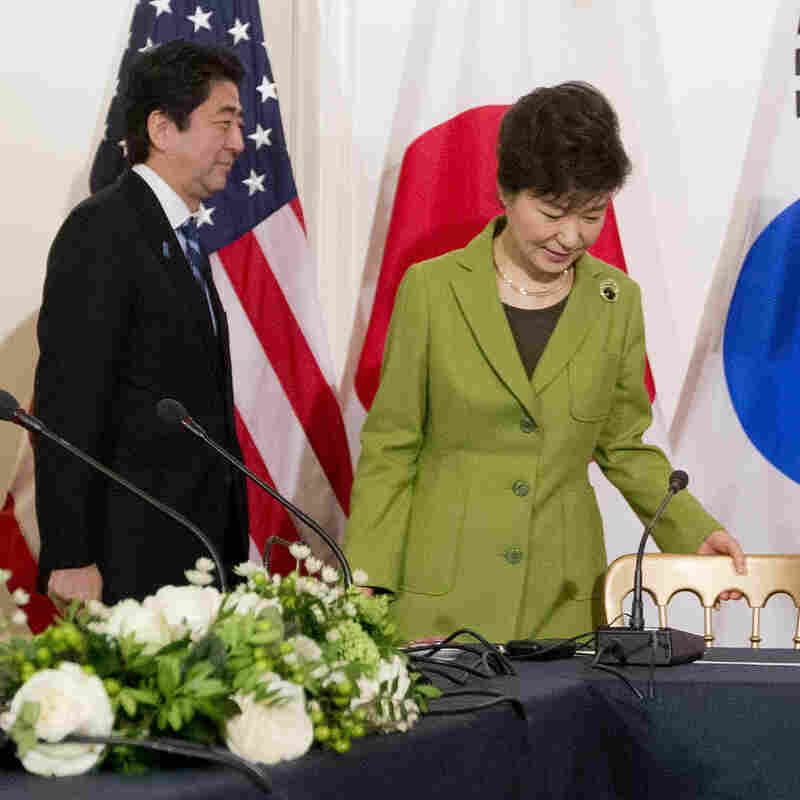 Japanese Prime Minister Shinzo Abe and South Korean President Park Geun-hye walk to their seats for the start of a trilateral meeting with the U.S. in 2014. Japan and Korea's leaders have yet to meet one-on-one. Pablo Martinez Monsivais/AP hide caption 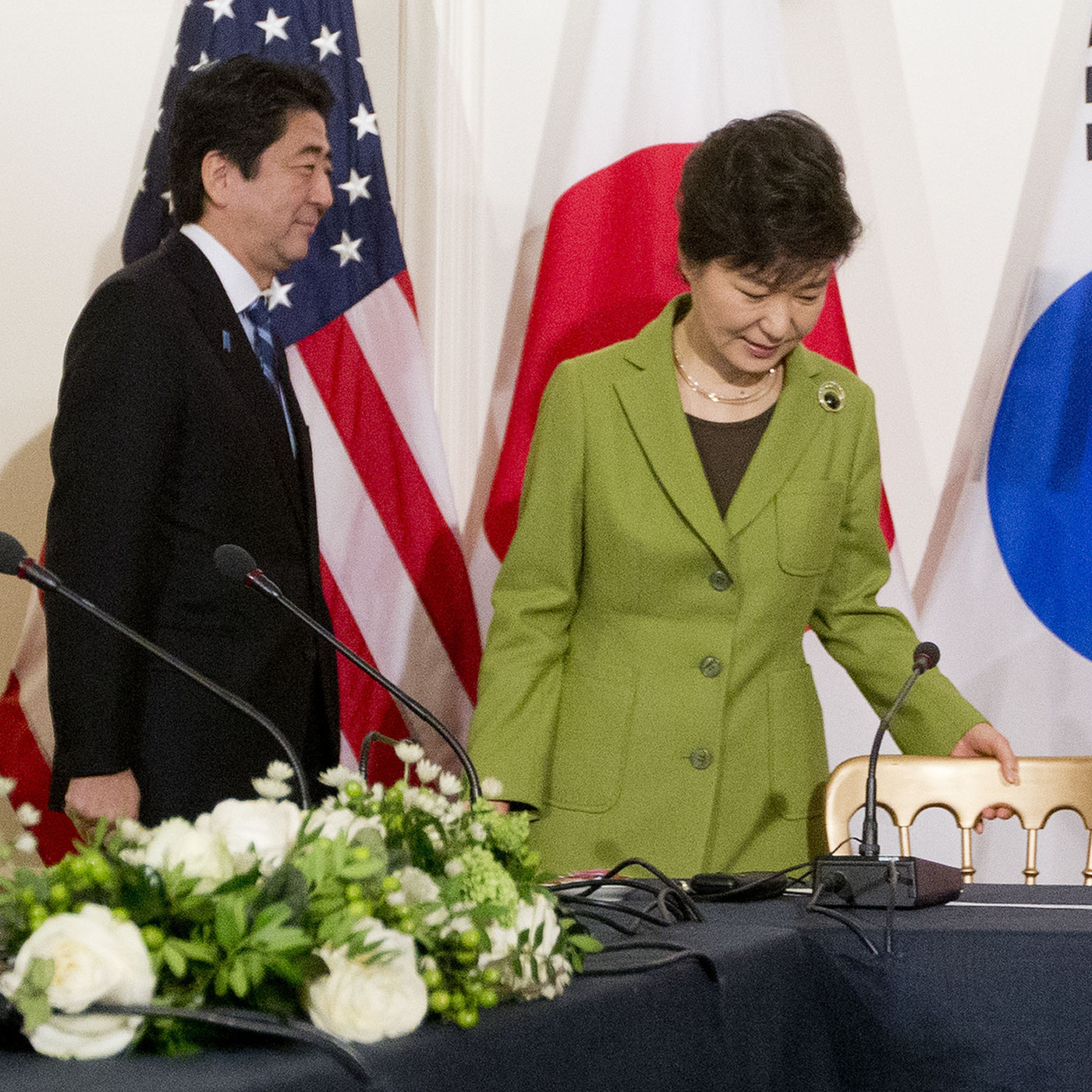 Japanese Prime Minister Shinzo Abe and South Korean President Park Geun-hye walk to their seats for the start of a trilateral meeting with the U.S. in 2014. Japan and Korea's leaders have yet to meet one-on-one.

Leaders from three powerful Asian countries — China, Japan and South Korea — will sit together in Seoul this weekend, their first summit in several years. The fact they're meeting at all is an achievement.

Just days before Japanese Prime Minister Shinzo Abe was set to arrive in Seoul, a pair of Chinese and South Korean artists unveiled statues of great symbolism at a Seoul park.

They are bronze statues of young girls: one Korean, the other Chinese, hands clenched in their laps. Artists say they represent the tens of thousands of Korean and Chinese women forced into sexual slavery for Japanese soldiers during World War II.

"More importantly, to protest that this history has been repeatedly denied, denied, by the history revisionists," the artist adds.

This sentiment is common in South Korea, where citizens haven't forgotten Japanese conduct during the war and continue pressing for fuller apologies for the army's aggression. Japan says the issue of sex slaves was settled in a 1965 treaty that normalized relations between the two countries.

When the three Asian powers meet on Sunday in a trilateral summit, issues like this one linger, especially for longtime rivals Korea and Japan. They have the rockiest relationship within the group.

"There's all kinds of domestic politics and public opinion has hardened as these two leaders have failed to find some kind of bridge, you know, of remorse," says John Delury. He is a China historian and professor at Seoul's Yonsei University.

"Now we're seeing the first fledgling effort to kind of crawl out of the pit that they've dug for themselves," he says.

Abe and South Korean President Park Geun-hye have not met one-on-one since either of them took power. They're expected to finally do so, on the sidelines of the summit. It's something the U.S. certainly wants to see.

"These are the U.S.'s two so-called linchpin allies in this neighborhood. You've got obviously one of the biggest economies in the world in Japan, you have a serious economy here in Korea, and you have military players in a region that's going through some security turmoil because of the rise of China," says Delury.

Analysts say this weekend's meeting is a good start — but only a start.

"We can't just have this summit and end with it," says Katharine Moon, the Korea Foundation Chair at the Brookings Institution.

"We have to make sure that despite the difficulties and tensions, that all three countries will continue to pursue issues of common concern not just this year, next year during President Park's term, but for, one would say, in perpetuity," says Moon.

The three nations do share plenty of common concerns. Their economies are increasingly interdependent. Energy needs are high. And air pollution is a regional problem that knows no borders. But the expectations for any real outcomes this weekend are quite low.

She says the Asian leaders may be able to call the summit a victory, just by going through with it.