Accessibility links
For Taiwanese Dogs, Being Square Is Stylish : Parallels These days, owners are asking for their four-legged friends to be styled as spheres and squares. We visit the Taiwanese grooming shop where the geometric grooming trend took root. 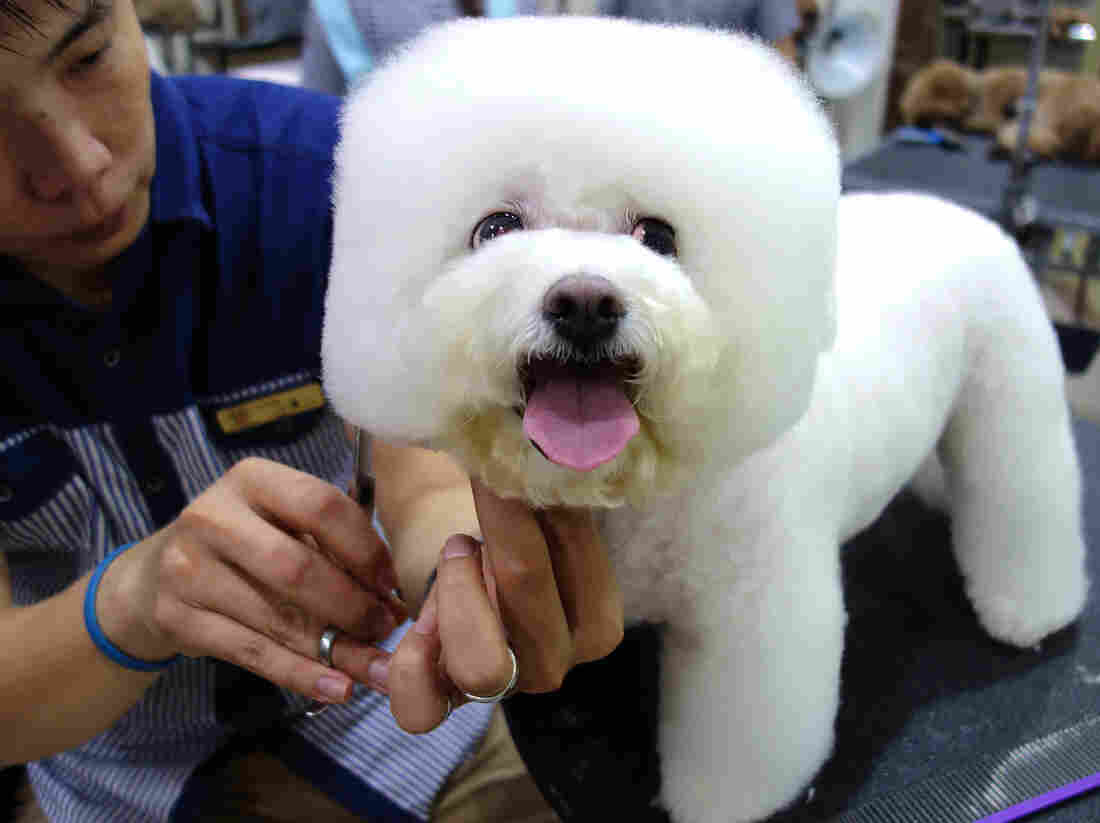 Tang Xiong Xiong, a Bichon Frise, came into the salon as a ball of fluff and emerged with her head shaped like a square. "She's getting used to it," says her owner. Elise Hu/NPR hide caption 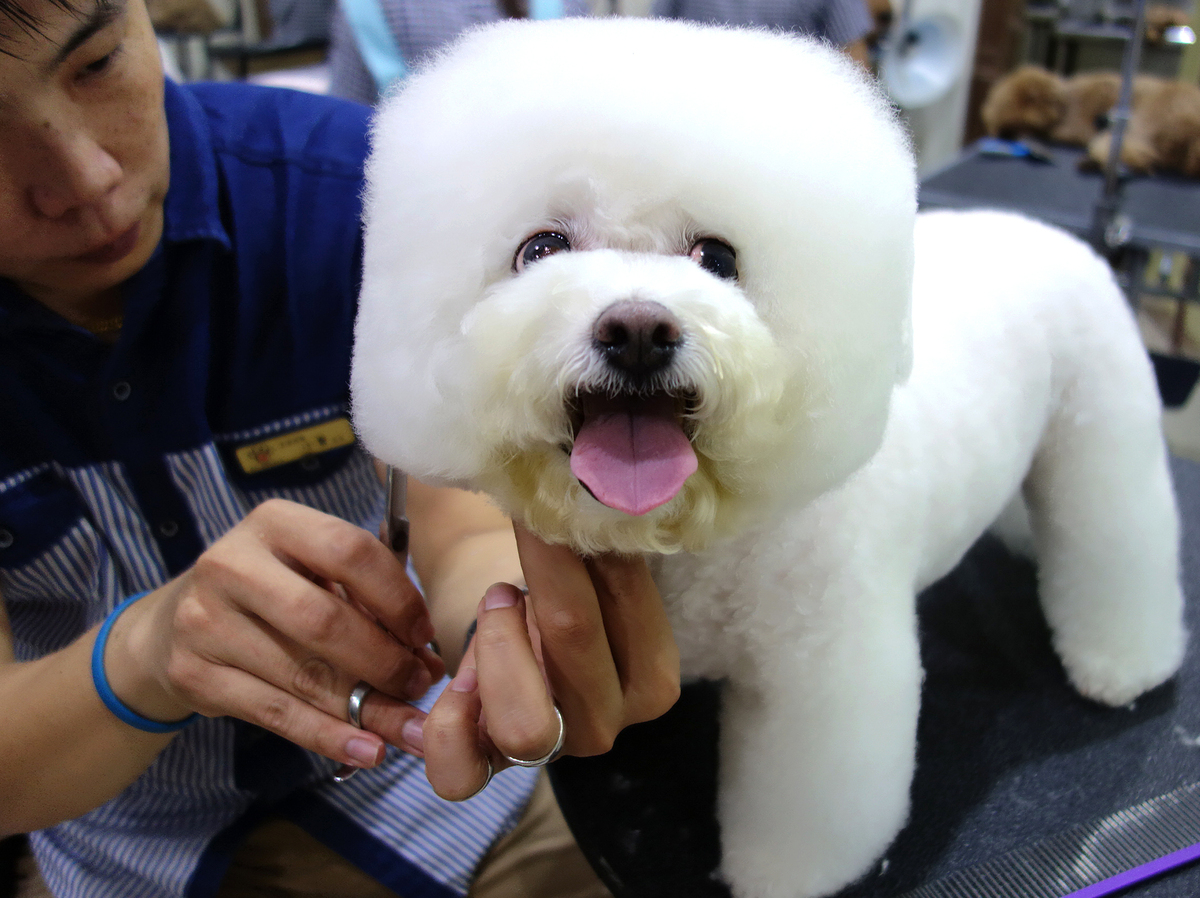 Tang Xiong Xiong, a Bichon Frise, came into the salon as a ball of fluff and emerged with her head shaped like a square. "She's getting used to it," says her owner.

In Taiwan, it's not enough just to get your dog groomed regularly. These days, owners are asking for their four-legged friends to become geometric shapes, like spheres and squares. I first saw the trend this spring, when adorable creatures with heads styled into perfect squares started showing up across my social feeds.

So to really see the square cut done right, I had to see it for myself. With the help of local producer Fanny Liu, we went to the man who made it a viral sensation. He's Mo Ming Fung, or Xiao Mo. And he runs a grooming shop that's become ground zero for special-request cuts.

On this day, we have a front-row seat as he styles an 8-year-old Bichon Frise named Tang Xiong Xiong. If done right, her head will go from a white puff of fur into a precisely shaped square.

"I've just given her a blowout and am about to design the head shape," he says. 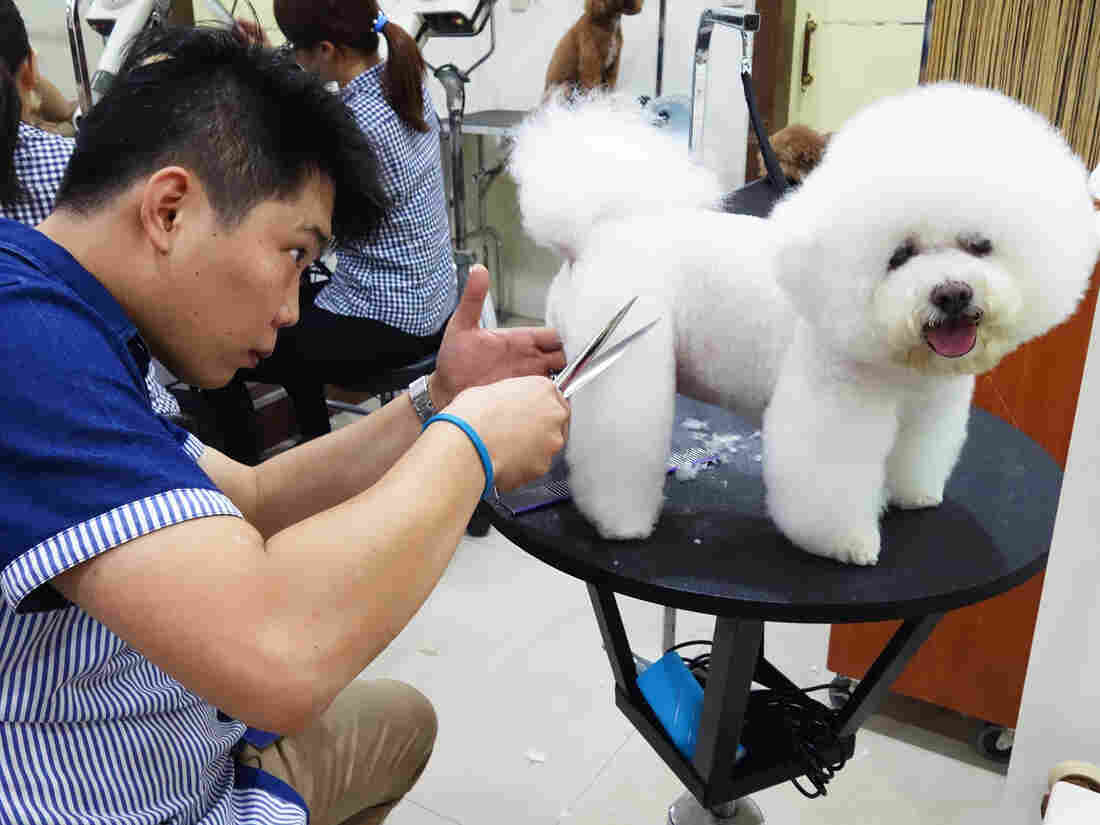 Pet groomer Xiao Mo gets to work shaping Tang Xiong Xiong, one of his many canine clients, into a square. Elise Hu/NPR hide caption 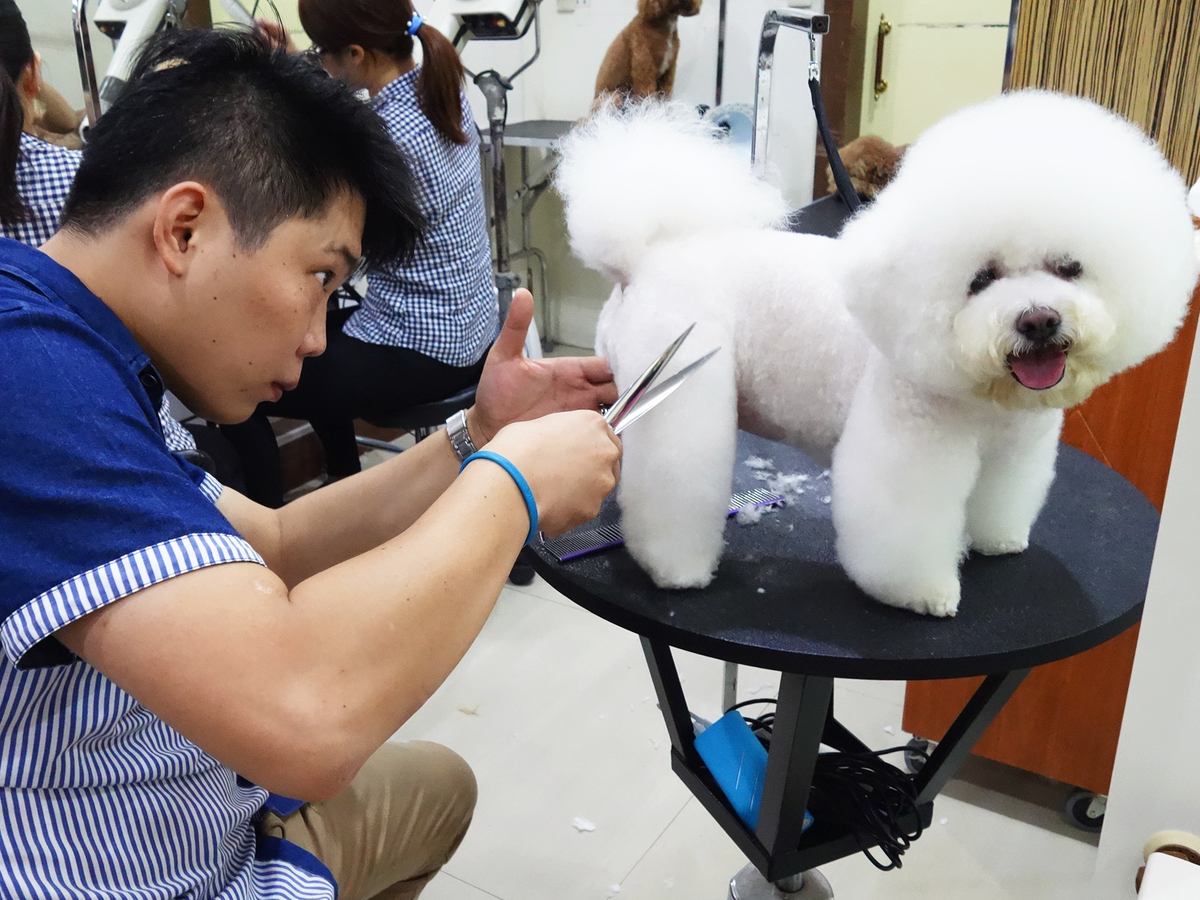 Pet groomer Xiao Mo gets to work shaping Tang Xiong Xiong, one of his many canine clients, into a square.

Xiao Mo takes his work seriously. He uses eight different kinds of shears and scissors to make the square shape. One of his special grooming scissors costs about $3,000. So getting your dog groomed by Mo will cost you, too — about $75 a cut.

He didn't become a master groomer overnight. Mo has spent the past 13 years perfecting his skills, grooming dogs' heads into squares, spheres, triangles, flowers and, lately, pushing for even more possibilities.

"I want to improve my skills," he says. "These days, I'm working on cut in the shape of an [old model] Apple computer monitor, which looks round from the back. I want to perfect it, so I won't start teaching others until I think the style is ready."

Why did canine topiary become such a thing in Taiwan? Mo suggests it has to do with the country's low human birth rate — Taiwan joins Japan and South Korea as having some of the world's lowest birth rates — and the power of social sharing.

"Groomers have tried geometric shape styles before. But it started to attract people's attention this year, mostly because people posted photos on social media paired with interesting headlines," he says.

After a nearly 45-minute cut, our Bichon Frise's new 'do is done. Her owner, Paul Chiang, is here to pick her up. Xiao Mo carries her out with a giant pink bow on her collar.

"To be honest, I was a little afraid at the square design, that it might make her look odd," Chiang says. "But this is great, actually. I'm very impressed by the artistry of the groomer."

But what does the dog think?

"She's getting used to it, I think," Chiang says.

Fanny Liu contributed to this story.