Accessibility links
Hitting ISIS Where It Hurts By Striking Oil Trucks : Parallels Illicit oil sales generate large revenues every day for the Islamic State. The U.S. airstrikes could dry up a significant stream of cash for the group. 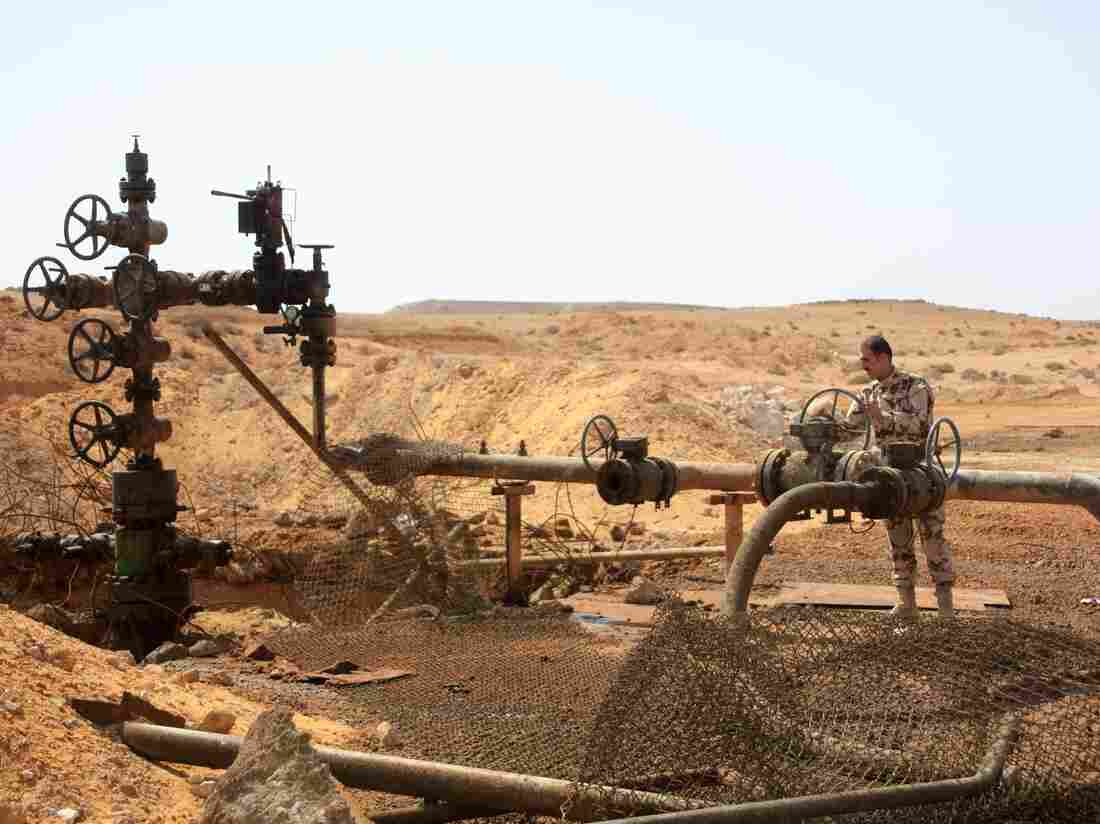 A member of the Syrian government forces stands next to a well at Jazel oil field, near the ancient city of Palmyra, after they retook the area from the Islamic State in March. U.S.-led airstrikes have targeted oil facilities run by ISIS, which, according to some estimates, earns as much as $1 million per day from oil sales. STR/AFP/Getty Images hide caption 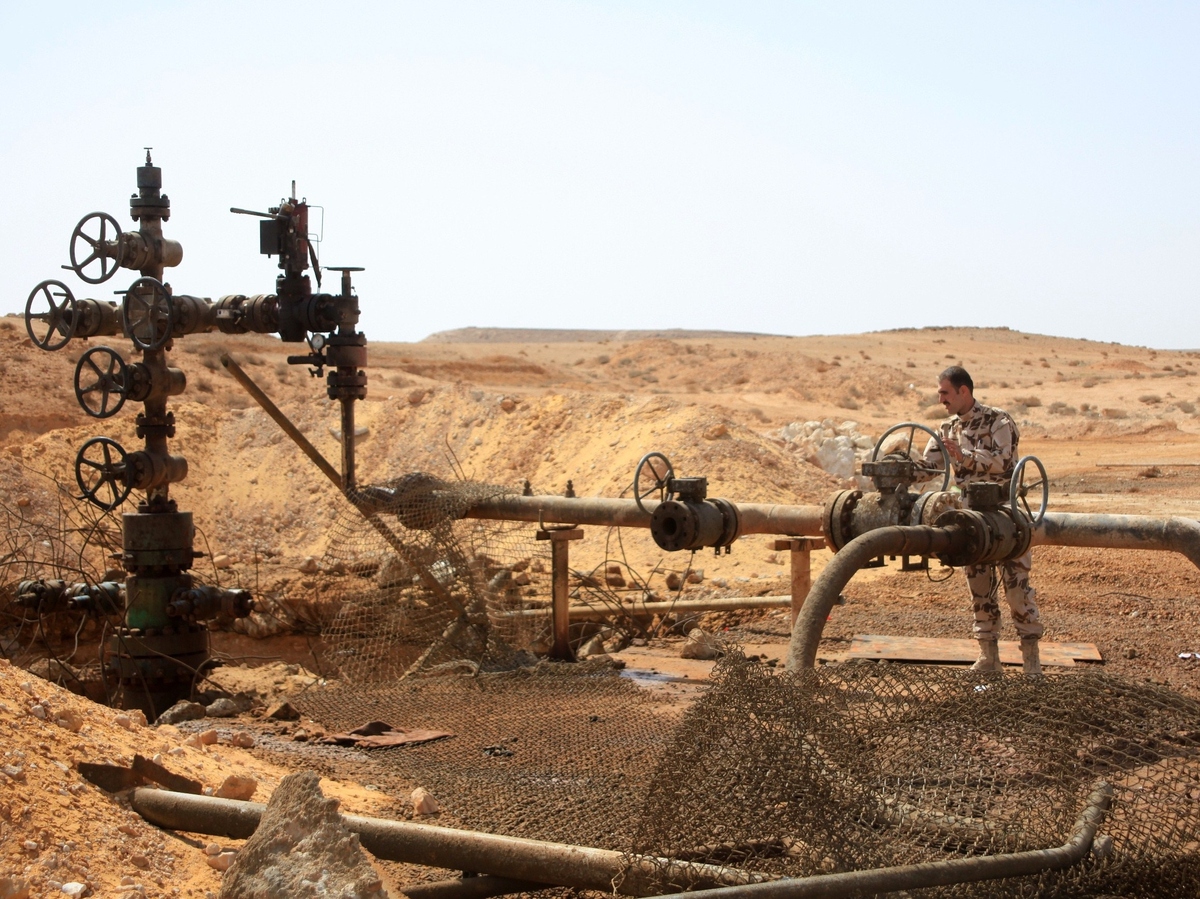 A member of the Syrian government forces stands next to a well at Jazel oil field, near the ancient city of Palmyra, after they retook the area from the Islamic State in March. U.S.-led airstrikes have targeted oil facilities run by ISIS, which, according to some estimates, earns as much as $1 million per day from oil sales.

Fuel Is Crucial In The Battle Over Syria

The debate over how to combat the self-declared Islamic State is increasing in the wake of the Paris attacks. There are calls for more airstrikes or putting troops on the ground in Syria. But the U.S. military says it launched an attack this week that hit the Islamic State right where it hurt.

On Monday, U.S. warplanes flew low over an area in eastern Syria controlled by the Islamic State, or ISIS. The target was roughly 300 trucks used to transport crude oil for the terrorist organization, says Col. Steve Warren, the U.S. military spokesman in Baghdad.

"We flew over with F-15s and we dropped leaflets we had developed, written in Arabic, that essentially said, 'Hey, run away, we're about to strike your trucks,' " he says.

The U.S. dropped the leaflets about an hour before the strikes. Many — but not all — drivers left their trucks and ran away, Warren says.

"There was a few hangers-on, and for those, we did strafing runs nearby to convince them once and for all that it wasn't a good idea to stay in the area," he says. "Some of them actually ran and hid in a tent, which is not good protection against bombs and bullets."

Warren says 116 trucks were destroyed and many more were damaged in the strikes. None of the truck drivers were killed, he says.

Cutting off ISIS financing is an important element of strategy against the group. The U.S. has targeted ISIS oil infrastructure — wells, pipelines and the like — for more than a year, but these are often quickly repaired by militants. The U.S. bombed ISIS oil facilities last year, but waited until now to make its first attack on the trucks that actually move the crude.

Warren says they're an important part of the distribution chain: "We've looked at these trucks for some time and decided finally it's time to strike those trucks."

It's hotly debated how much ISIS makes from illicit oil sales. Estimates range as high as $1 million a day. Regardless, Hassan Hassan, with Chatham House, a London-based research center, says targeting the oil trucks signals a shift in U.S. strategy to stem the flow of an important income stream for ISIS.

"Oil has been a key source of income for ISIS. It helps it fund not only its military activities but also its ability to provide electricity, and it's part of its ability to govern and to govern effectively on the ground," he says.

As NPR's Deborah Amos reported in July, the group controls 80 percent of Syria's prewar oil. The regime, under Bashar Assad, controls about 8 percent. Amos says ISIS has become a kind of militant OPEC, setting the price of crude. ISIS sells crude to the regime, to anti-Assad rebels, even indirectly to international aid agencies because often it's the only oil available.

ISIS controls oil fields in both Syria and northern Iraq, but its main producing region is in Deir Ezzor province, in eastern Syria. The Financial Times followed the progress of one barrel of oil from extraction to end user. The British newspaper said ISIS sells most of its crude to independent traders at oil fields, and that Syrian and Iraqi buyers can wait with their trucks for weeks to fill up. Much of it is sent to refineries and then transported through Syria or across Turkish or Iraqi borders.

Launching attacks on oil trucks may have an impact on the distribution of oil, but it also deprives many people of fuel — and civilian truck drivers of badly needed income. The drivers use well-established smuggling routes, says Elizabeth Rosenberg, director of the Energy Economics and Security program at the Center for a New American Security.

"This is a way of life for people who make a living moving stolen goods across this territory. Not everyone involved is a supporter of ISIS or connected to ISIS directly or ideologically. This is the kind of informal economy that has existed long before ISIS was present," she notes.

Hassan, the co-author of ISIS: Inside the Army of Terror, says stemming oil revenue may hurt ISIS, but there are other ways to fill its coffers. "Now they have to rely more on taxes, on extortion, on the confiscation of properties," he says.

Not to mention kidnapping and looting antiquities.