Accessibility links
Why Did France Become A Leading Target For Extremists? : Parallels After three major terror attacks and several near misses since last year, France now appears more vulnerable to extremists than any Western country. 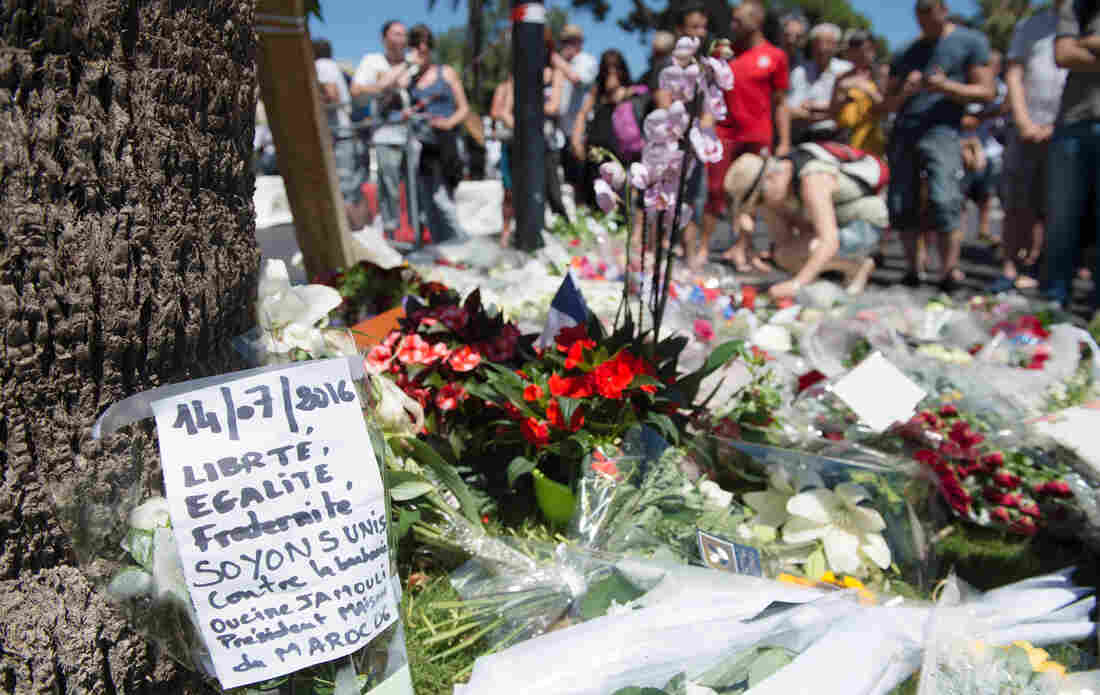 People lay flowers Friday near the seafront in Nice in tribute to victims of Thursday's truck attack that killed more than 80 people. France has suffered three major terrorist attacks since 2015 and appears as vulnerable as any Western nation. ClÃ©ment Mahoudeau/IP3/Getty Images hide caption 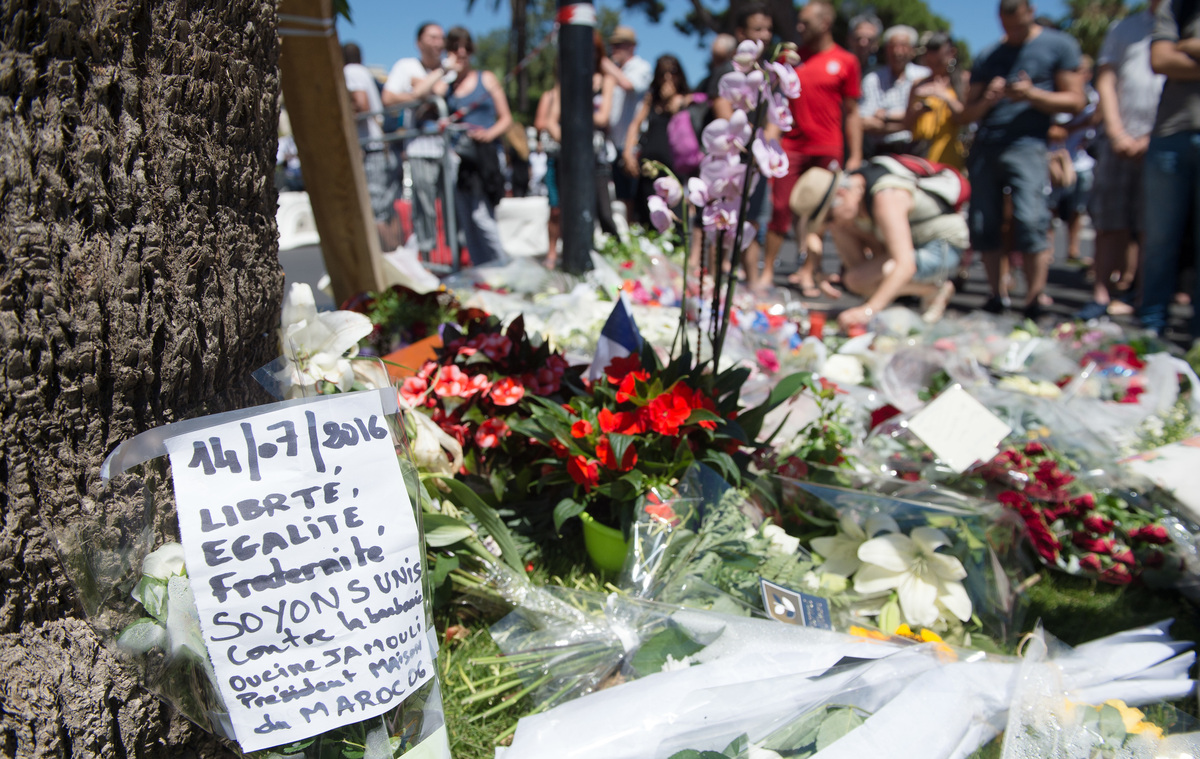 People lay flowers Friday near the seafront in Nice in tribute to victims of Thursday's truck attack that killed more than 80 people. France has suffered three major terrorist attacks since 2015 and appears as vulnerable as any Western nation.

Editor's Note: This story was originally published on Nov. 21, 2015, and has been updated to reflect the attack in Nice, France.

Many Americans have seen France as a country that wasn't supportive, bordering on antagonistic, as the U.S. waged wars against radical Islamists on several fronts following the Sept. 11 attacks.

Fair or not a decade ago, that image is outdated. Today, France is fully engaged in a battle against extremists. It has suffered three major attacks and several near misses since the beginning of 2015 and now appears more vulnerable to terrorism than any other Western country.

He cited three reasons: France's current bombing campaign against the Islamic State in Syria; its previous military efforts in Afghanistan's war, and its ongoing battle against Islamist radicals in former French colonies in North Africa.

"Now you French crusaders are no better than Americans and you are targets wherever you are," Hyman said, summarizing the message from extremists.

French President Francois Hollande described the Thursday night truck attack in Nice, which killed more than 80 people, as an act of terror. French authorities and media identified the driver was Mohamed Lahouaiej Bouhlel, 31, who was born in Tunisia but also had French citizenship.

The Nice attack follows the November assault in Paris, which killed 130, and the shooting at the satirical magazine Charlie Hebdo, which was hit in January 2015. There have also been several advanced plots or attempted attacks during this span, according to French authorities.

There's no one reason France is being targeted so often. Several factors seem to be at play:

Disaffected Muslims At Home: France's long colonial history in North Africa led to generations of immigrants, and France now has the largest Muslim population in Europe, numbering an estimated 5 million, or about 8 percent of the population.

France has successfully absorbed immigrants from all corners of the globe, though North Africans have struggled more than most, and several recent attacks in France have been carried out by French citizens of North African descent.

"It hurts me to say it, but we know that these were French people who killed other French people," Hollande said following the Paris attacks.

The French experience is in contrast to the U.S., where Muslims have generally assimilated more easily. Home-grown radicals in the U.S. appear to be on the rise, but in smaller numbers than in France and elsewhere in Europe.

Turbulence In North Africa: The French value the longstanding political, economic and personal connections with North Africa, but there's a downside during a time of rising radicalism.

Muslim extremists in Africa harboring anti-Western views are more likely to have some sort of connection – and grievance — with France than any other Western country.

"We saved Mali from being overrun as a nation and kept the columns of al-Qaida from marching on the capital Bamako. And we are there now, at this moment, flying around bombing, and shooting and training," Hyman noted. But he said that's one reason extremists have targeted France. 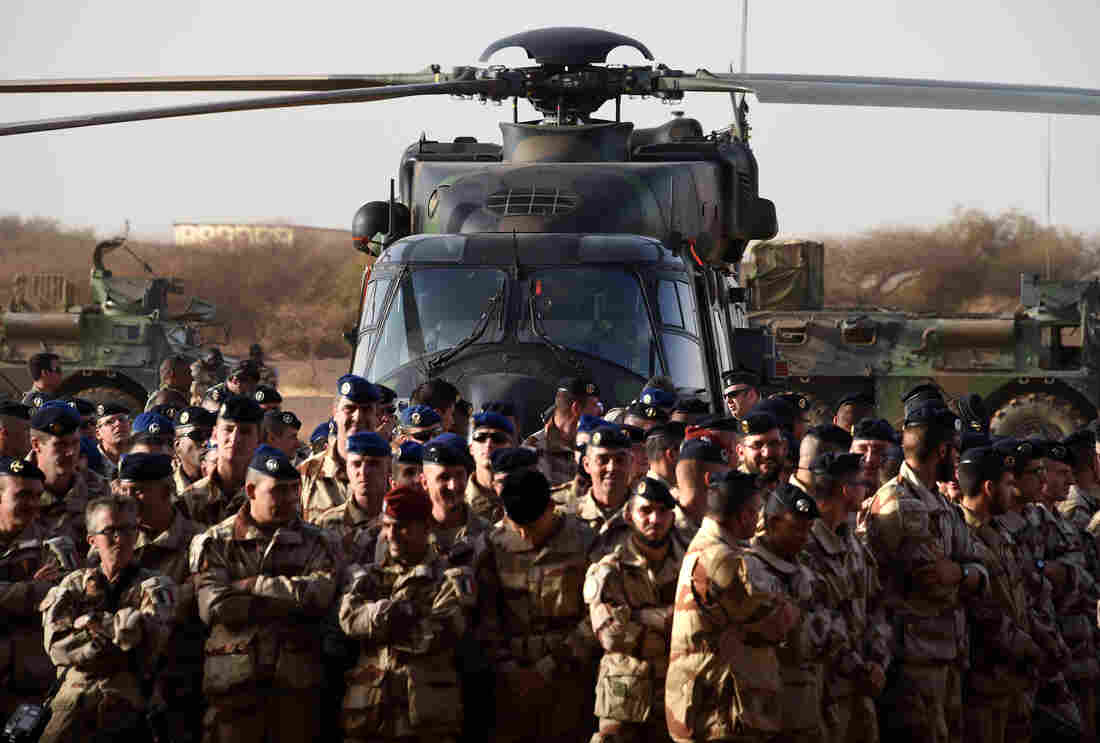 French soldiers listen to the country's defense minister in January 2015 at a French base outside the northern Mali city of Gao. The French military routed a radical Islamist group from large parts of northern Mali in 2013 and have remained to assist the government. French troops are currently in five former colonies in Africa backing the governments. Dominique Faget/AFP/Getty Images hide caption

French Secularism: France keeps a strict separation of church and state under the principle of laïcité, or secularism. It's a principle that has broad support as a way for different faiths to co-exist.

As NPR's Paris correspondent Eleanor Beardsley has noted, "You would never hear the president say, 'God bless France.' You would never have a congressional prayer breakfast of lawmakers. People do not pray in public."

But this idea has also translated into laws that prohibit headscarves in public schools and government buildings and a nationwide ban on burkas.

All religions are covered by these policies, and no one draws a direct link between them and the violence in France. But they have been an ongoing source of friction in Muslim communities that feel displays of their faith are being restricted.

The Charlie Hebdo attacks in January 2015 exposed other fissures in French society. While the killings produced a strong sense of solidarity among the French, some Muslim students refused to participate in a moment of silence. In addition, some Muslims felt the magazine was deliberately antagonizing them with its unflattering depictions of the Prophet Muhammad.

"Every person who carries a French passport is to look and feel and act as if he or she is French in a very uniform kind of way," New York Times journalist Elaine Sciolino told NPR's Fresh Air last year. But "those with an Arab-sounding last name or a Muslim-sounding last name are stigmatized." 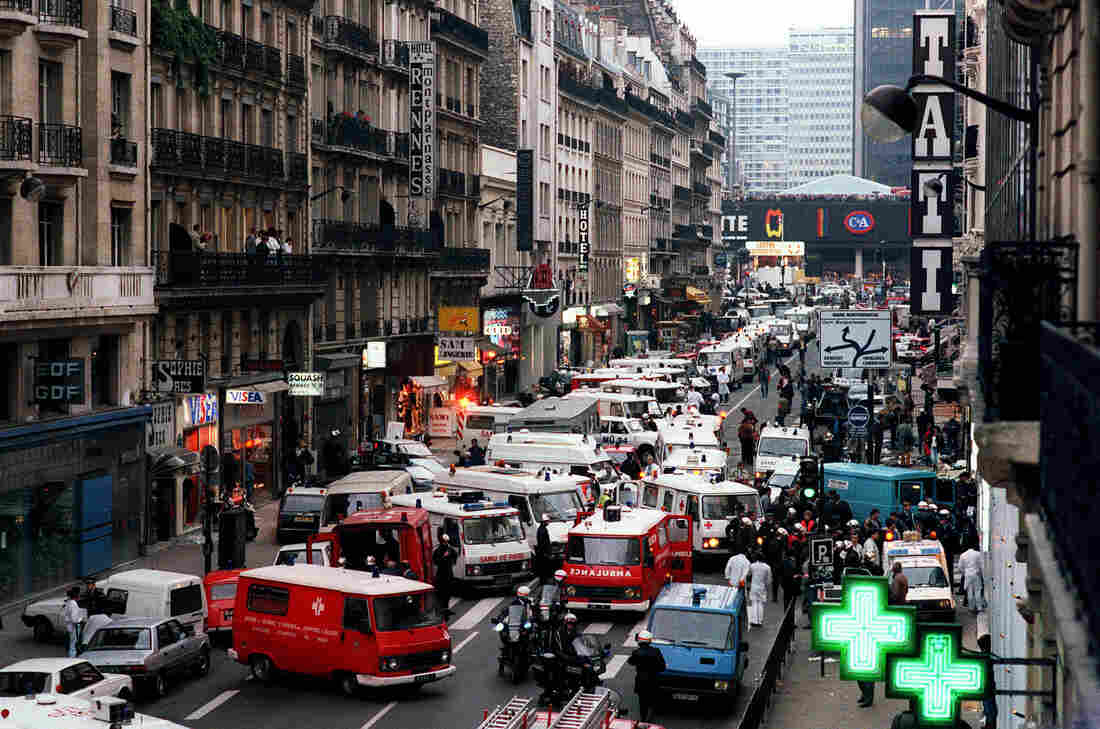 A view of the Rue de Rennes in Paris after a bomb blast on Sept. 17, 1986. In 1985-86, the radical Lebanese group Hezbollah was blamed for seven explosions in France that killed more than a dozen and injured hundreds. AFP/Getty Images hide caption

How Is France Responding? Radical Islam is not new to France. In 1985-86, the Lebanese group Hezbollah was blamed for seven separate bombings that killed more than a dozen people and wounded hundreds.

At the same time, French citizens were among those kidnapped with regularity in Lebanon's nasty civil war. So France has wrestled with counter-terrorism issues for decades, but did not appear prepared for the current round.

"The historical problem, in a nutshell, is we used to have internal state espionage until about 2007," Hyman said. "There was a certain corps of police that would go to cafes and spy on your conversation and then write little notes about it. ... There were no arrests or anything, they'd just make files on you, and since then we've lost one of our eyes, so to speak."

Hollande requested, and received emergency powers after the Paris attacks last November. It has given authorities broad powers to question and detain suspects, sometimes placing them under house arrest based merely on suspicions of a neighbor.

Those powers were to expire on July 26, but Hollande has asked that they be extended for three more months. Security in France is already extremely tight, with the police out in full force for the recent European Cup soccer tournament, which took place without any major security incidents.

Greg Myre is the international editor of NPR. org. Follow him @gregmyre1.