Accessibility links
The New Hotel In Vienna, Run By Refugees : Parallels The hotel is staffed by refugees from countries including Afghanistan, Nigeria and Algeria. It serves as a model for how to train newcomers to work in the European countries where they claim asylum. 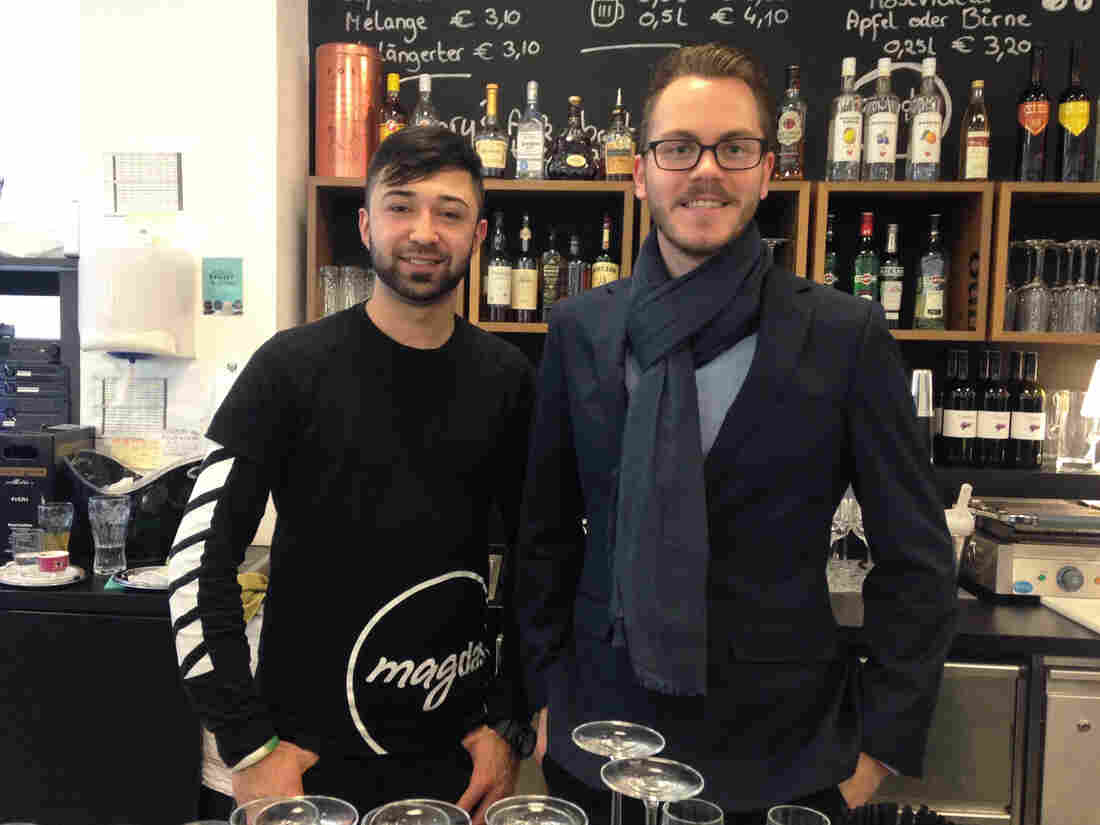 Sebastiaan De Vos, right, the general manager of Vienna's Magdas Hotel, recruits refugees like 24-year-old Ehsan Amini, left, to work at the hotel. Amini, who works in the Magdas cafe, fled Afghanistan and arrived in Austria five years ago. He's one of 20 refugees staffing the hotel. Joanna Kakissis for NPR hide caption 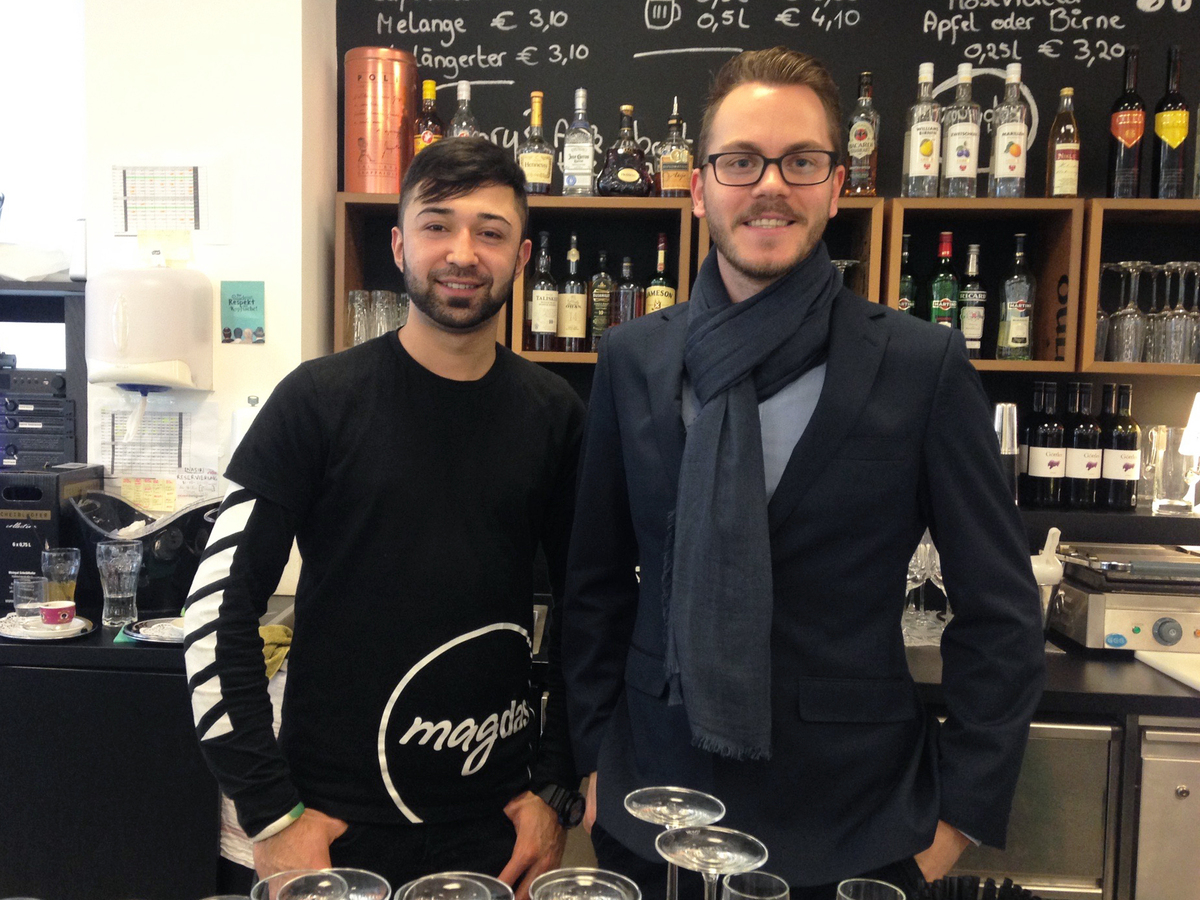 Sebastiaan De Vos, right, the general manager of Vienna's Magdas Hotel, recruits refugees like 24-year-old Ehsan Amini, left, to work at the hotel. Amini, who works in the Magdas cafe, fled Afghanistan and arrived in Austria five years ago. He's one of 20 refugees staffing the hotel.

The Magdas Hotel sits in a quiet, leafy corner of Vienna. The sunny lobby is decorated with vintage bicycles and suitcases. The soundtrack is old-school R&B.

Wolfram and Christiane von Pannwitz, a physician and an art restorer from Berlin, are checking in. It's Christiane's first time in Vienna.

"It was a birthday present," Wolfram says, smiling at his wife.

Christiane chose Magdas over several higher-end hotels. She wanted to meet the staff here — like the young man registering the couple at the front desk. He speaks fluent German, wears a pressed suit jacket and a boyish smile. He's from Afghanistan. He fled the Taliban 10 years ago, when he was just 14. 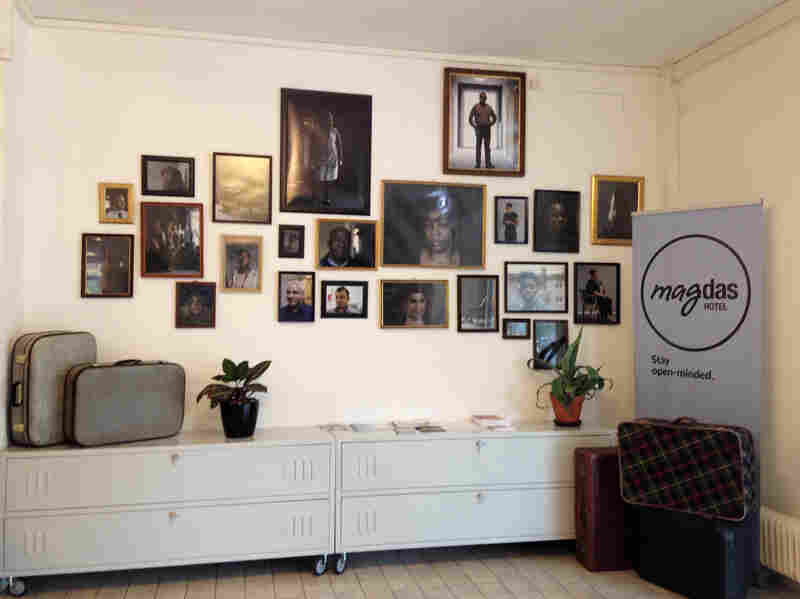 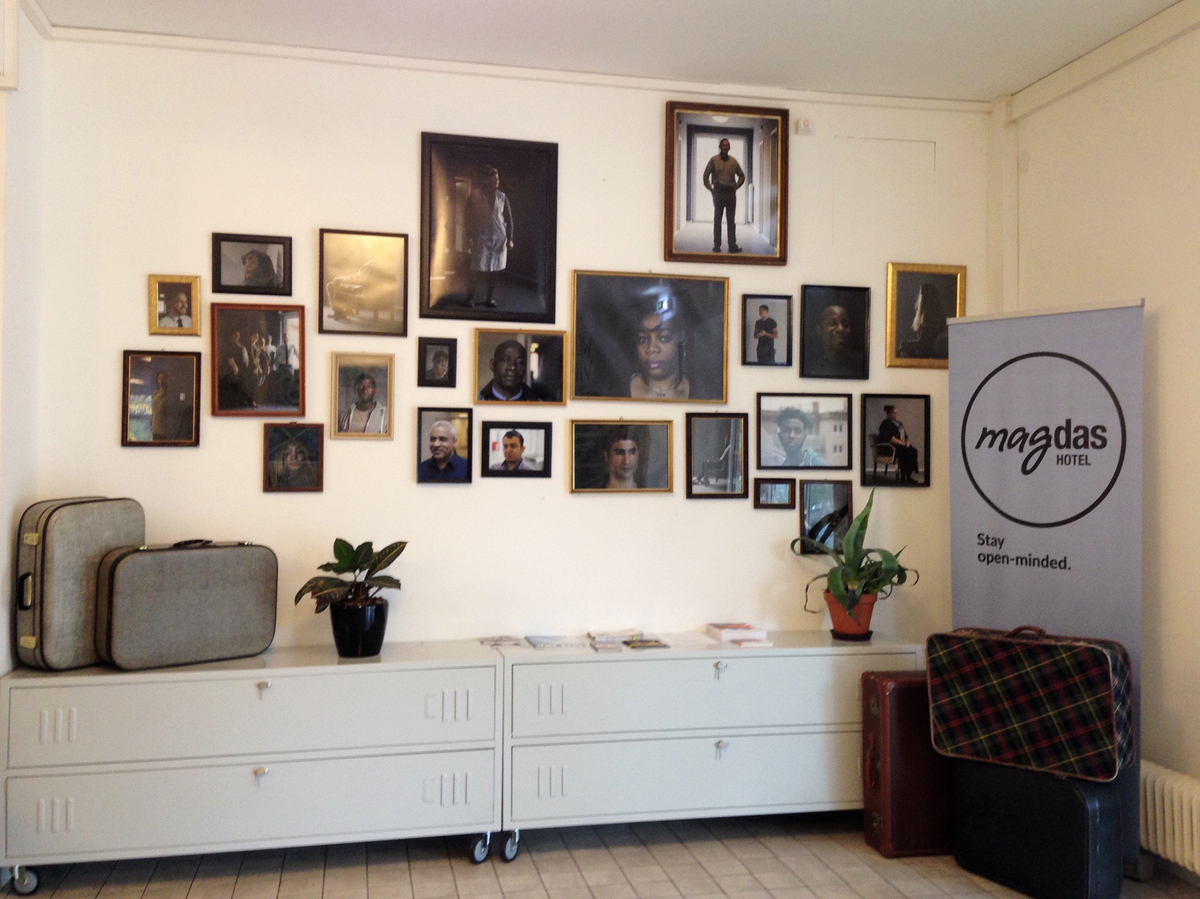 Magdas is run largely by refugees. Owned by the Catholic charity Caritas, it opened early this year and is serving as a model for how to train newcomers — especially refugees with few resources — to work in the European countries where they claim asylum.

Considering that more than 880,000 refugees have reached Europe so far this year, "I think it's a good idea to have these kinds of working places," Christiane says.

The hotel's general manager is 29-year-old Sebastiaan de Vos, from the Netherlands. I meet him around the corner from the lobby, at the hotel's lively cafe.

He tells me that Caritas spent nearly $2 million renovating one of its former retirement homes to accommodate the hotel. Crowdfunding helped finance the purchase of silverware, pillows and furniture. Art students decorated each of the 78 rooms.

"The word 'refugee' in German, fluechtling, has got a negative touch in Austria," he says. Many Austrians believe refugees "only bring problems," but it's an incorrect assumption, he says.

"It's important to show that [refugees] come to Austria and bring qualifications with them," he says. "For example, one guy who works here, he speaks seven languages."

Twenty of the hotel's 31 employees are refugees, hailing from countries including Afghanistan, Algeria, Bangladesh, Guinea-Bissau and Nigeria. The rest are hotel professionals like de Vos, who train the staff.

He waves at a young Afghan behind the cafe counter, who is in fact making a cappuccino. His name is Ehsan Amini. He's 24 and arrived in Austria in 2010.

"This job is great, and I hope to keep it," Amini says in German. "The only challenge is learning to deal with the loads of new cultures here. It's like a melting pot of different nations."

Many of those applying to work at the hotel have only had "under-the-table" jobs they can't list on a CV. Consider 37-year-old Nicholas Isikhueme, who also works at the cafe. A Christian from Nigeria, he fled his home in 2002, when Boko Haram, an Islamist extremist group from the country's north, harassed him and his family.

While he waited for his visa during his early years in Vienna, "I worked in construction," he says. "I also worked cleaning the streets and as a mover."

His first "official" job in Austria started this year — at Magdas.

Magdas Hotel isn't set up to be a money-making venture. Instead, it falls under the aegis of social business, de Vos says.

"We are not looking to have the best income," he says. "We are looking at how we can train the people who work here better all the time."

The hotel may not be turning a profit yet, but it's receiving good reviews on the travel website TripAdvisor. And de Vos says there's no shortage of guests.

"We already got the response that said, 'Hey, your hotel is doing so good, I can't even get a room right now,' so that's nice to hear," he says.

The von Pannwitzes, from Berlin, are among the lucky ones who did. "When Christiane found this place, it was so logical, we thought, why is it not happening in many more places?" Wolfram says.

It may yet. De Vos says he's fielded inquiries from other European business people and nonprofits wanting to set up their own versions of Hotel Magdas.