Accessibility links
How To Stay Carbon-Neutral When Getting To Paris Is Carbon-Costly : Parallels Tens of thousands of people flew to Paris for the U.N. climate summit. Flying emits a lot of carbon. How to deal with the contradiction? NPR's Ari Shapiro finds one answer. It cost a dollar. 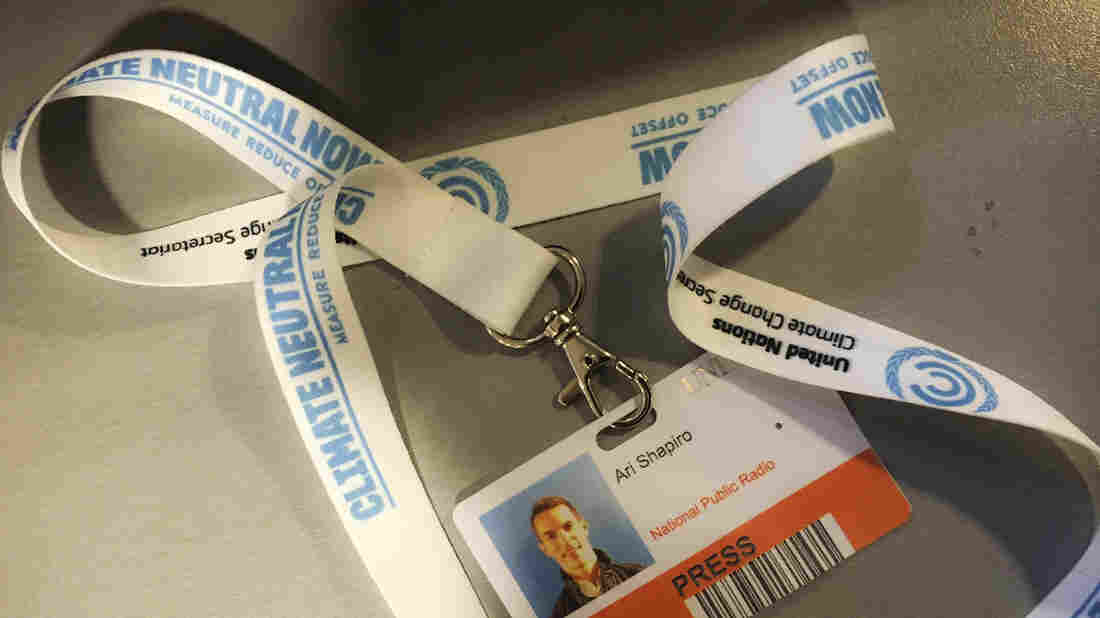 The round-trip flight that NPR's Ari Shapiro took to Paris emitted about a ton of greenhouse gases. Offsetting it cost a dollar, and he was given a white lanyard for his conference ID with the words "Climate Neutral Now" showing his trip was carbon-neutral. Ari Shapiro/NPR hide caption 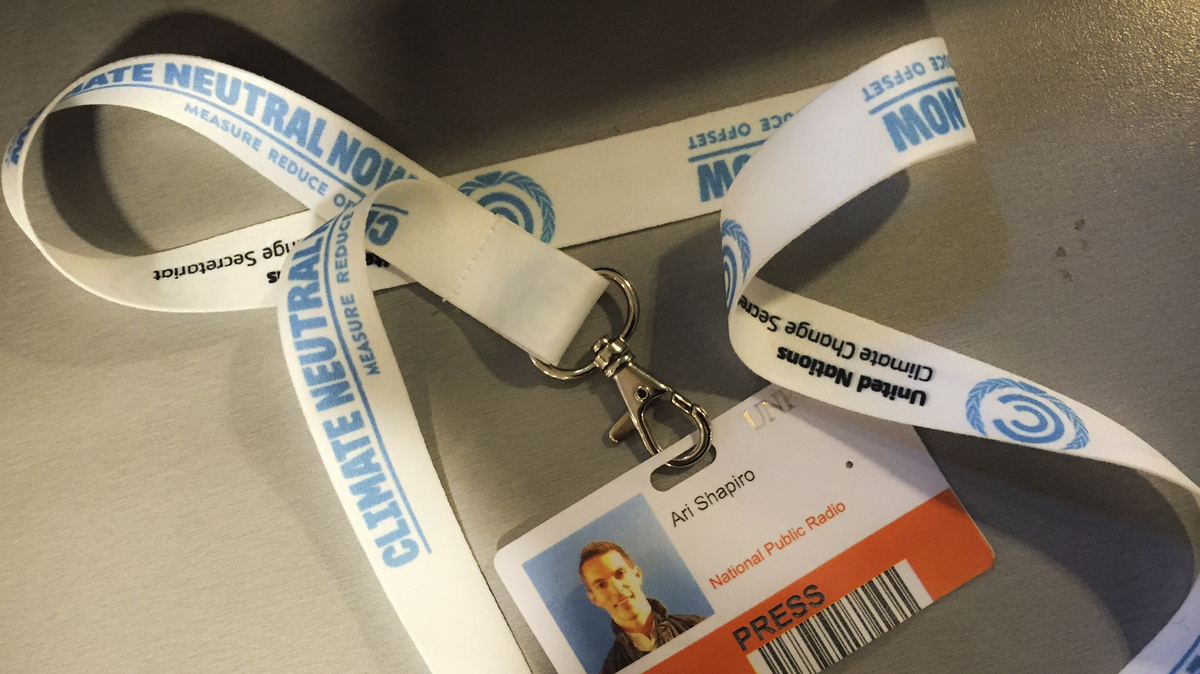 The round-trip flight that NPR's Ari Shapiro took to Paris emitted about a ton of greenhouse gases. Offsetting it cost a dollar, and he was given a white lanyard for his conference ID with the words "Climate Neutral Now" showing his trip was carbon-neutral.

There's a contradiction here at the U.N. climate summit in Paris. And it's been bugging me.

So I stopped a woman at random, Liz Hanson, from Whitehorse, Yukon, in Canada, and asked her about it.

"Big carbon footprint for that, right?" I asked her.

"I would say there probably really is," she said.

Here at the summit, there are tens of thousands of people who've flown to Paris to talk about reducing carbon emissions — emitting a lot of carbon in the process.

I went to a kiosk labeled "Carbon Neutral Now."

I asked Niclas Svenningsen, who works for the U.N. Environment Program, how much carbon I emitted flying from Washington to Paris.

On the website climateneutralnow.org, he punched in my itinerary and concluded my round-trip flight would emit about a ton of greenhouse gases.

At this kiosk, they do more than just calculate your emissions. The U.N. sells carbon offsets — basically, investments in projects that bend the emissions curve downward. The website features projects from clean cookstoves to renewable energy, each at a different price.

I picked a hydropower program in India.

To offset my flight to Paris and back, "it's a very low cost, actually," Svenningsen told me. "It's $1 per ton."

"It's ridiculously cheap, to be quite honest," he said. "And to be honest, also, the proper carbon price should be higher. But because the market's between demand and supply now today — it may change next week — but now, today, it's more supply than demand, and therefore prices are very, very low. And that's one reason many people are taking the opportunity to offset not only the flight, they offset for a year — or for life."

So I gave him a dollar.

For my dollar, I got a white lanyard for my conference ID.

All the U.N. staffers wear them. It's a way of showing that your trip here was carbon-neutral.

But most of the conference delegates here are not wearing white lanyards. Lots of people told me they just hadn't heard of the program.

Finally, I met Samuel Welsh, from England, wearing one.

"I thought it was a good idea to do that, seeing as I'm coming to a climate change conference," he said.

He told me he's not surprised by how few people are offsetting the carbon emissions from their flights.

"I think there's a lot of people here that do care," he said, "but maybe think that it's more than just an individual effort on behalf of themselves and think it's down to maybe negotiators and people like that."

Everyone here is so focused on the big global picture, sometimes it can be easy to overlook the small stuff.