Accessibility links
U.N. Bases Turn Into Cities For Desperate And Displaced In South Sudan : Parallels Two years ago, the United Nations made a spur-of-the-moment decision to open its bases to hundreds of thousands who sought refuge from war. Today, those bases resemble permanent communities. 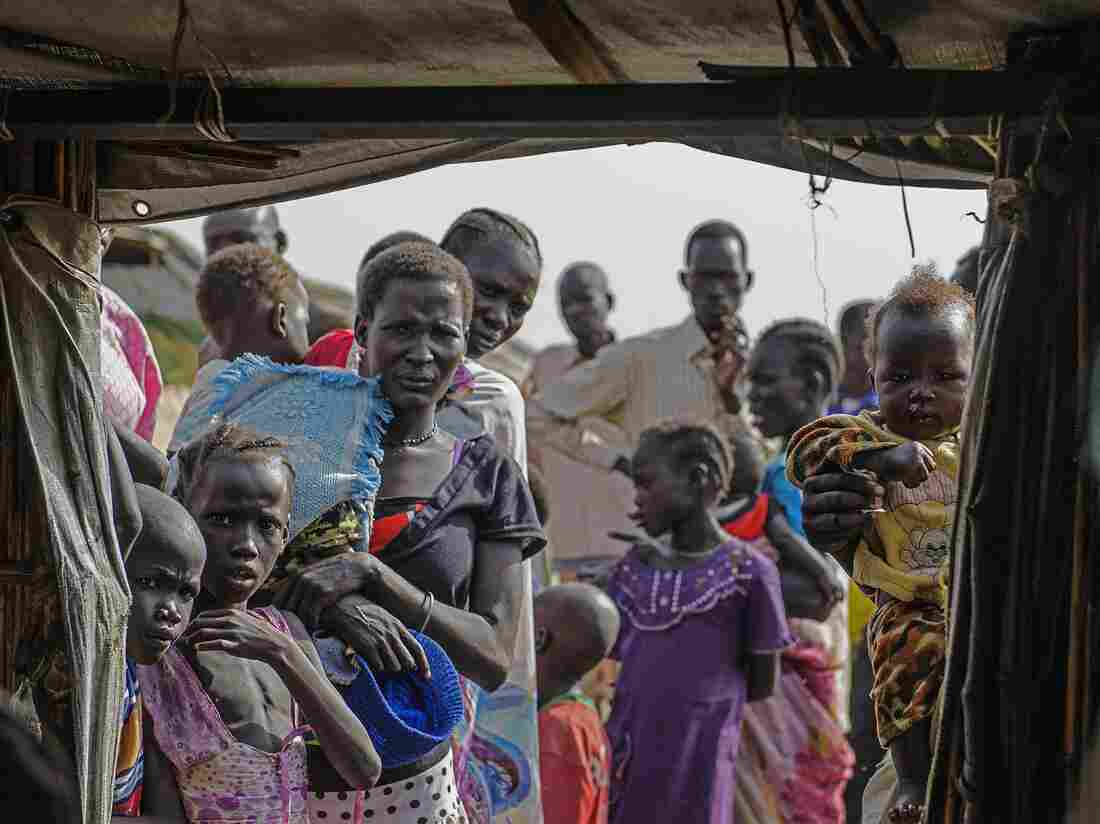 South Sudanese seeking refuge line up to register at the U.N.'s base in Bentiu in February. At that time, the camp was receiving up to 200 new people a day. It now serves as home to some 100,000 people. Charles Lomodong/AFP/Getty Images hide caption 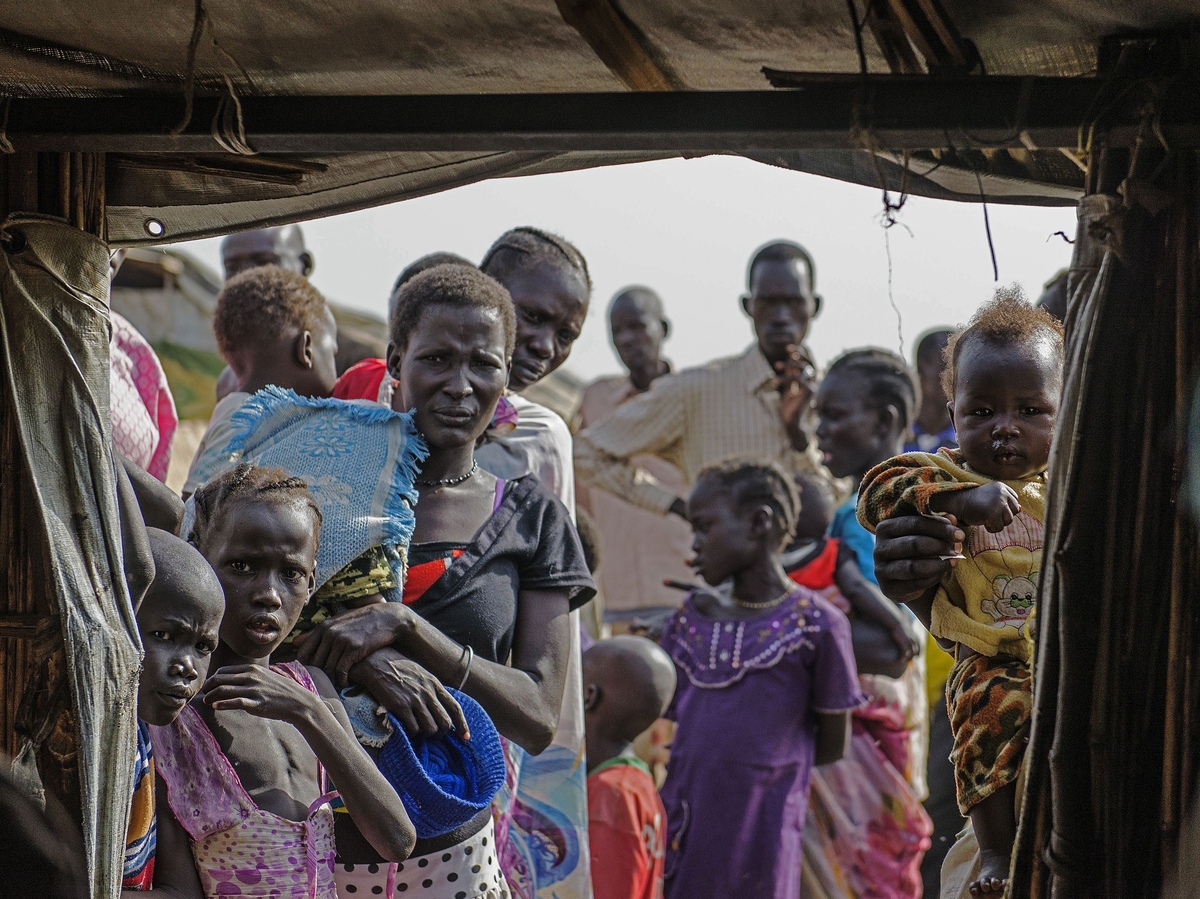 South Sudanese seeking refuge line up to register at the U.N.'s base in Bentiu in February. At that time, the camp was receiving up to 200 new people a day. It now serves as home to some 100,000 people.

Two years ago today, thousands of desperate South Sudanese came rushing to the gates of United Nations peacekeeper bases in the country, fleeing villages torn by ethnic conflict and begging for sanctuary.

The civil war, which started when a political rivalry between South Sudan's president and his former deputy spiraled into ethnic conflict, took the U.N. Mission in South Sudan (UNMISS) by surprise. Their military bases were not equipped to shelter thousands of displaced people.

But with surprising rapidity, UNMISS leadership came to a decision. They decided to do in South Sudan what they had not done in 1994 during the genocide in Rwanda, when civilians were left outside to die.

This time, they would offer protection. They boldly opened their gates, saving hundreds of thousands of lives.

Peacekeeping soldiers quickly got to work digging latrines and building levees against the fierce rains. Bentiu, a camp in the north of the country, was built on a swamp. Women in the camp stood all night in waist-deep water holding their children so they wouldn't drown while sleeping. Malaria was endemic.

Today, the Bentiu camp is transformed. Walking around the smooth dirt streets, it feels like an orderly frontier city, like something out of a Western movie set. More than 100,000 people who live here have schools, churches and clinics provided by aid organizations.

It's the biggest city in 100 miles, except it's not a city. It's a temporary camp that is supposed to start dismantling whenever real peace arrives. 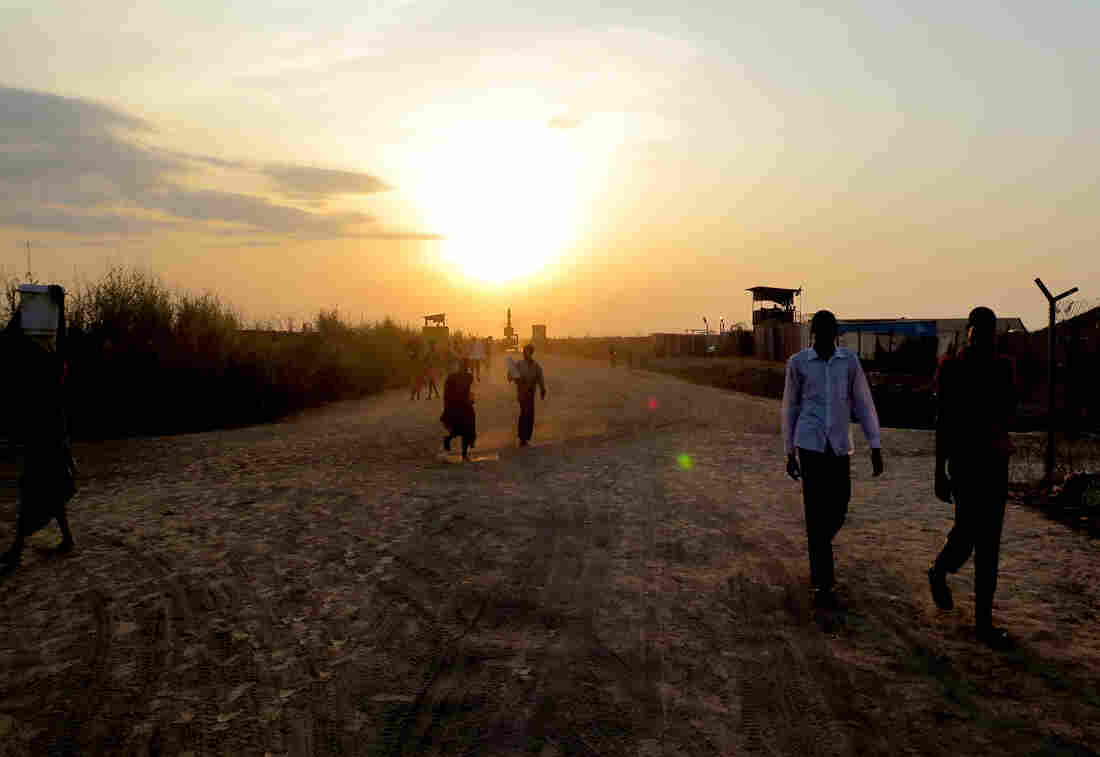 Parts of the Bentiu camp were once so flooded, women had to hold their children aloft all night during the fierce rains to prevent them from drowning. Now, the banks are built and the area is ready for new corrugated tin houses to be built. Gregory Warner/NPR hide caption 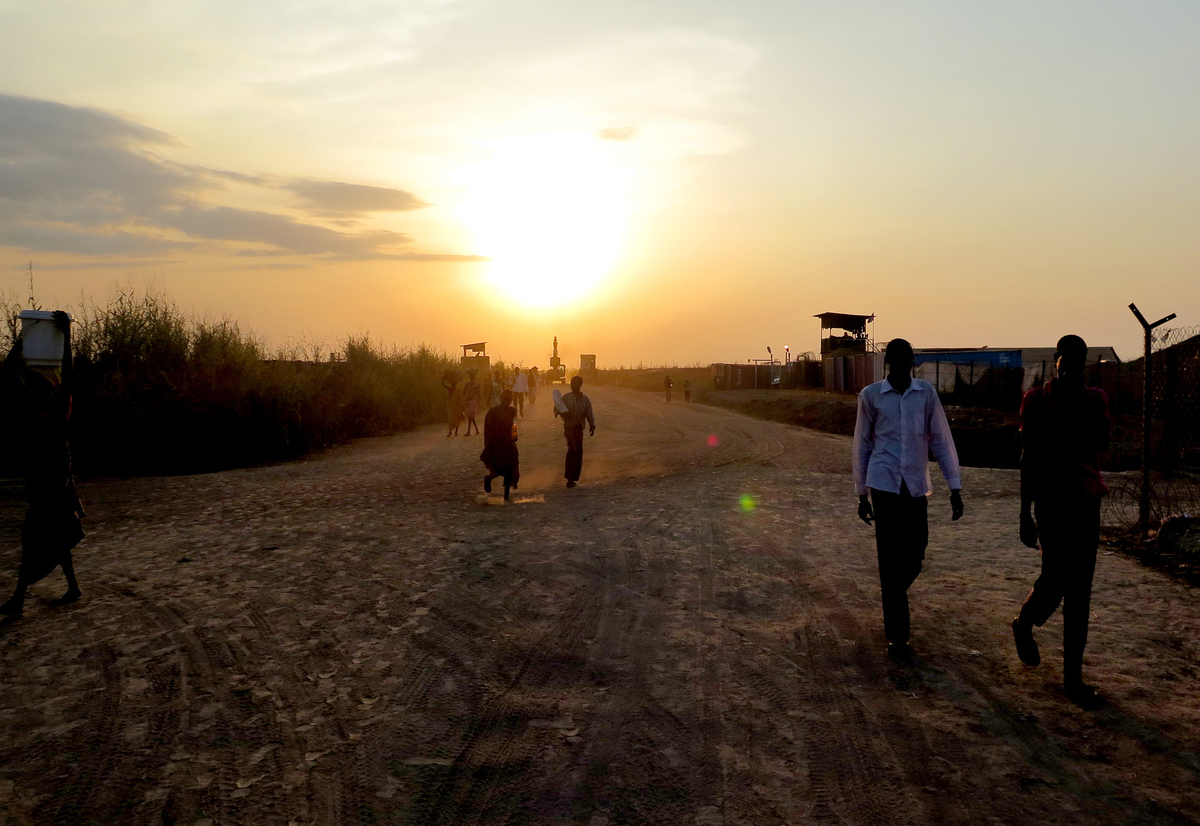 Parts of the Bentiu camp were once so flooded, women had to hold their children aloft all night during the fierce rains to prevent them from drowning. Now, the banks are built and the area is ready for new corrugated tin houses to be built.

There are dozens of U.N. bases turned refugee camps like this across South Sudan. They're called "protection of civilian sites" (PoCs), and their population has only increased as people continue to flee fighting and conflict-related hunger.

Talk to anyone here, and they will say they owe their lives to the concrete walls guarded by U.N. peacekeepers from India, Moldova and Rwanda.

But protecting civilians has not come without cost. A study of PoCs released Tuesday by the Uganda-based International Refugee Rights Initiative says that while the U.N. did the right thing in opening the gates, the hard walls also enforce ethnic divisions.

The survey looked at perceptions of UNMISS both inside and outside the camps. It found that people outside largely see the PoCs as places of danger, harboring combatants who laid down their arms as they entered.

"Camps that are a place of safety for some," lead author Lucy Hovil says, "are seen as a place of danger for others."

She says that association has made it harder for people inside the camps, especially young men, to leave.

"Some people said to us, 'Well, if we go home now, and they [ask us] where have you been for two years and we say the PoC site, they will associate us with having been part of the conflict itself,' " she says.

That conflict still simmers, despite a peace agreement signed in August. Meanwhile, government officials and rebel leaders have fueled distrust with divisive rhetoric.

Hovil says that's a Catch-22 of the U.N. role: The concrete walls that keep civilians safe also allow the spread of rumor and resentments on both sides. And they inhibit natural communication and social interaction between rival ethnic groups. Government officials have come on the radio to say that anyone refusing to leave the camps is a rebel sympathizer.

UNMISS, she says, "lacks a good public relations strategy" to combat this.

In a primary school in the Bentiu camp, I meet Simon Tut Kuol, the 29-year-old headmaster. He lists all the things his students don't have, like chairs and textbooks.

I ask him if he thinks the kids know why that is. Do they ask who took their chairs and textbooks away before they were forced to move to the camp?

"Yes, we know them!" Kuol exclaims. "It is the soldiers — the government that destroyed all those things."

The government is associated with one ethnic group, the Dinka. This camp primarily harbors another, the Nuer.

But Kuol insists that he tries to shield the students from ethnic hatred. In one fifth grade class, the kids were belting out an anthem from South Sudan's independence in 2011: "This is our land. This is our motherland."

Kuol shakes his head. He tells me he wishes that government officials could come and hear this song of unity — if any of them would dare set foot inside this camp.