Accessibility links
China's Internet Forum May Provide A Peek At Its Cyber-Ambitions : Parallels China is hosting an international summit touting its vision of an orderly, government-controllable Internet. But China's prospects for exporting its censorship-heavy model overseas don't look bright. 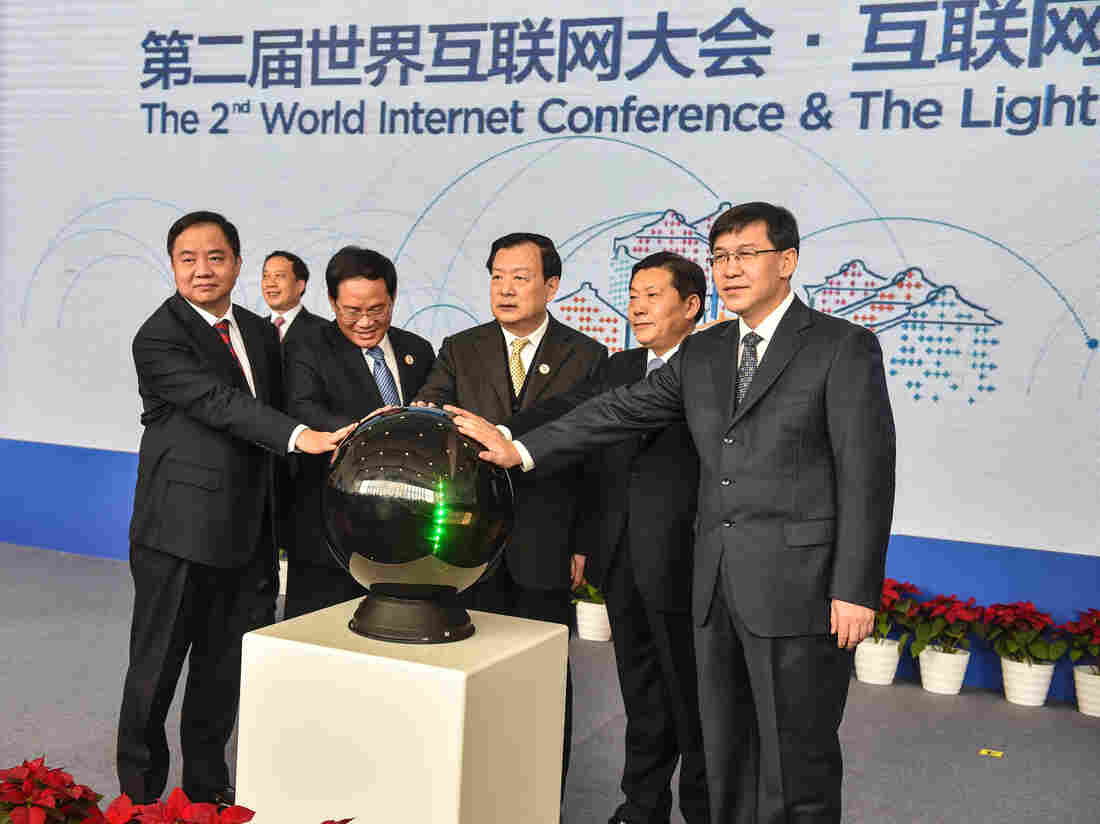 China's Cyberspace Administration minister Lu Wei (second from right) and other officials attend the opening ceremony of the Light of the Internet Expo on Tuesday as part of the Second World Internet Conference, which starts Wednesday. Lu has said that controlling the Internet is about as easy as "nailing Jell-O to the wall." Xu Yu/Xinhua /Landov hide caption 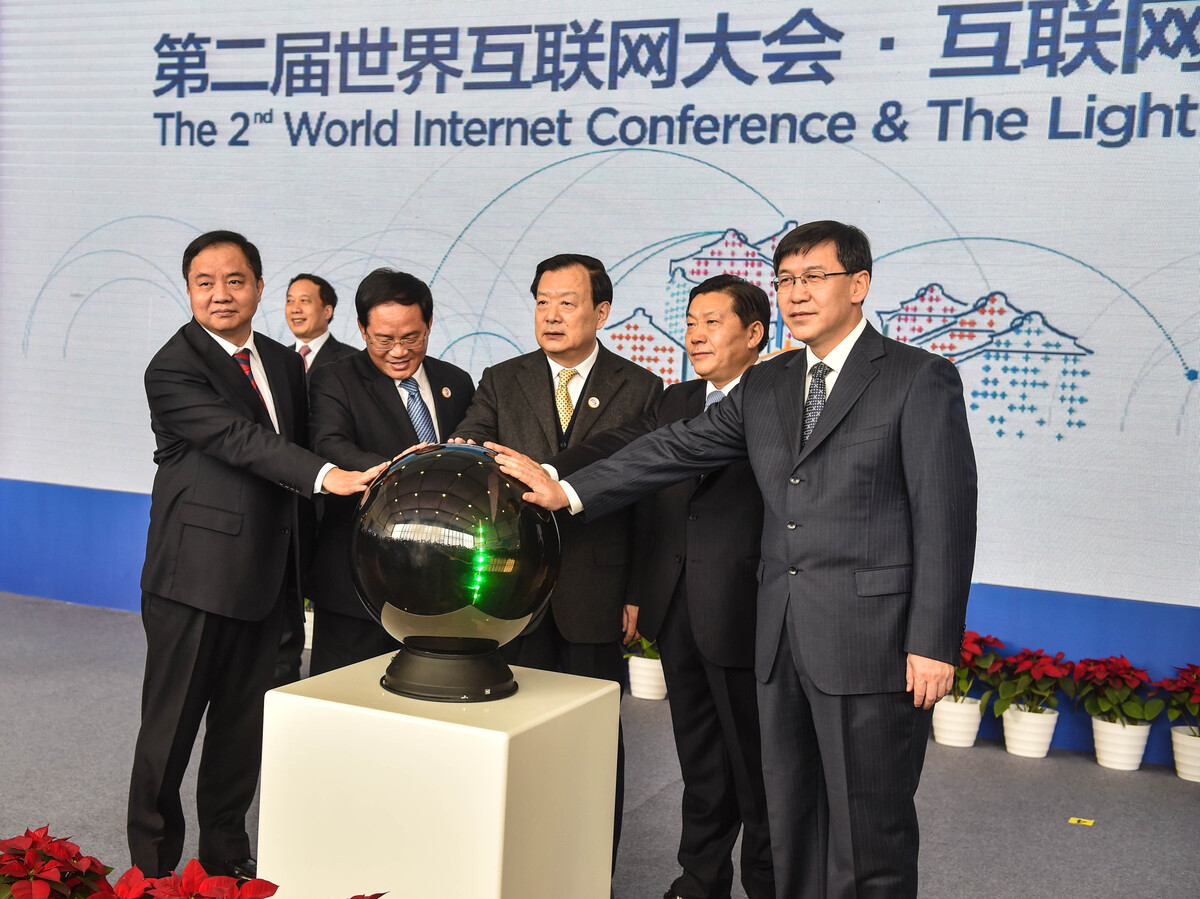 China's Cyberspace Administration minister Lu Wei (second from right) and other officials attend the opening ceremony of the Light of the Internet Expo on Tuesday as part of the Second World Internet Conference, which starts Wednesday. Lu has said that controlling the Internet is about as easy as "nailing Jell-O to the wall."

Heads of state, including the prime ministers of Pakistan and Russia, and major technology firms will gather Wednesday in Wuzhen, a picturesque little town of canals and boats in eastern China, to talk about the Internet.

One important theme, even if it's not stated explicitly, is how governments can keep some level of control over the Internet.

President Xi Jinping will address the Second World Internet Conference — and may shed light on China's ambition to become a great power in cyberspace.

Hosting the meeting is the head of China's Cyberspace Administration, a former journalist named Lu Wei. He accompanied President Xi to the U.S. this fall, when Xi met with tech CEOs including Apple's Tim Cook and Facebook's Mark Zuckerberg.

"We learned our management of the Internet from Western, developed nations," he said, "and I can tell you that we still have not learned enough."

He admitted that China does block some foreign websites, but he unapologetically asserted China's right to pick its friends and its business partners.

"We do not welcome those who make money from China and occupy our market while vilifying us," he said — a pointed reference to online criticism of China. "No family likes to invite unfriendly people to be their guests."

China blocks many websites without which the Internet would be unimaginable in the West — including Twitter, Facebook, The New York Times and YouTube — because the government cannot control their content. Chinese Internet users tend to rely instead on Chinese social media, including the microblog Sina Weibo and the messaging app WeChat.

Cyber czar Lu said, though, that controlling the Internet is about as easy as "nailing Jell-O to the wall."

Indeed, despite heavy censorship, political commentary about the trial of a prominent Chinese human rights lawyer, Pu Zhiqiang, and other news still made it onto Chinese social media this week.

Beijing-based media scholar Zhan Jiang, a professor at Beijing Foreign Studies University, says a lot of the struggle for control of online political speech is actually going on inside the Communist Party itself. Xi has admitted that he's been stalemated in his struggle against corrupt officials.

"This shows that Xi's opponents are strong," Zhan says. "They may try to smear him, and he may need to release information about them. So the matter of who controls the discourse is very important."

Zhan says that in Xi's vision of the Internet, security outweighs individual expression.

"In today's world, the development of the Internet poses challenges for countries' sovereignty, security and development," Xi said in a speech to the National Congress of Brazil last year. "Although the Internet has the characteristic of being highly globalized, no country's sovereignty or rights in the realm of information should be infringed upon."

Zhan adds that Xi is focused far more on the Internet and less on traditional media than any of his predecessors. And he argues that China's Cyberspace Administration is more open-minded than the country's traditional propaganda apparatus.

China's vision of an Internet divided into separate national networks — a "splinternet," as some call it — is not what the Internet is really about, Zhan concedes. But China has no plans to push its model of Internet management on other countries.

"If it exists, it's not their main idea," Zhan says. "They're facing an increasingly complex domestic environment, and they've got their hands full managing that."

At last year's conference, also in Wuzhen, the hosts circulated a draft declaration that called for each nation's "Internet sovereignty" to be respected. The draft reportedly failed to garner much support. Internet czar Lu Wei said at his press briefing that they won't bother with such declarations this year.