Accessibility links
Spain's Economy Is Expanding, But Most New Jobs Are Temporary : Parallels For a generation of young Spaniards, temporary employment has become the new normal. As voters head to the polls on Sunday, many are wondering if that should really count as recovery. 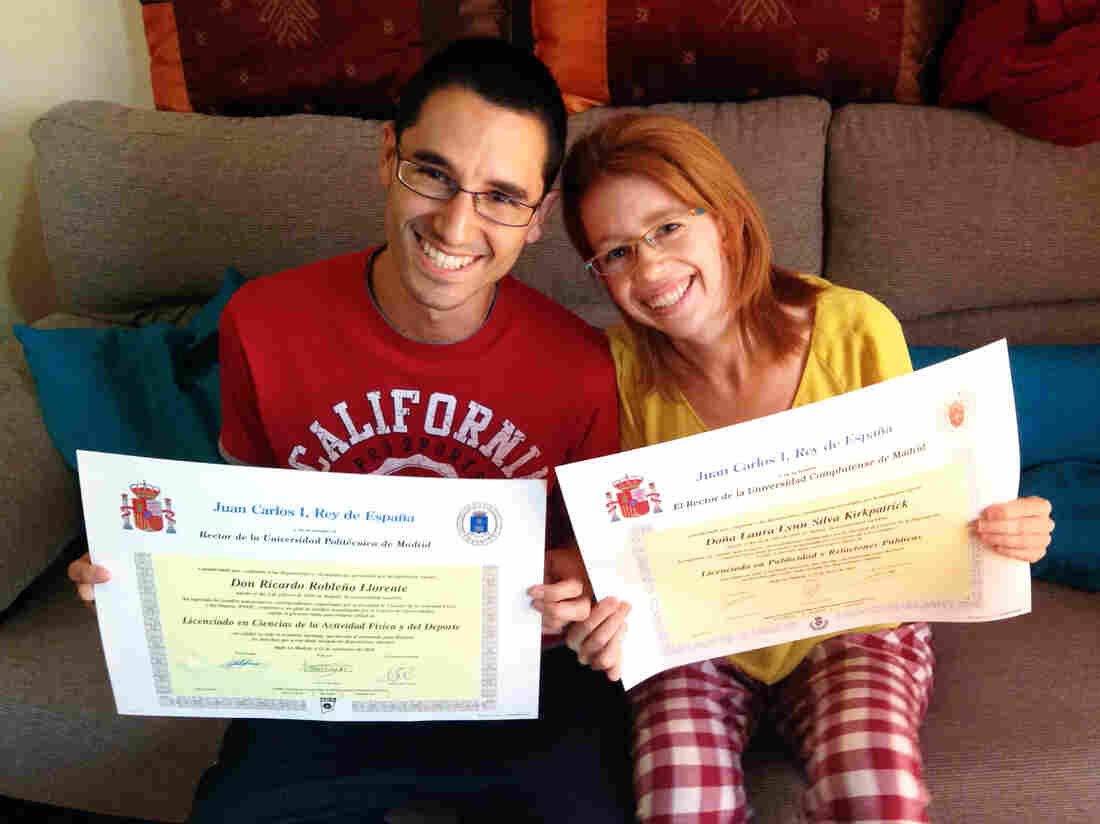 Ricardo Robleño Llorente and his wife, Laura Silva Kirkpatrick, show their college degrees at home in Madrid. Even though they have two bachelor's degrees and a master's between them, they were unable to find permanent work through most of their 20s, during Spain's economic crisis. "Why bother going to college at all?" Silva Kirkpatrick asks. Lauren Frayer for NPR hide caption 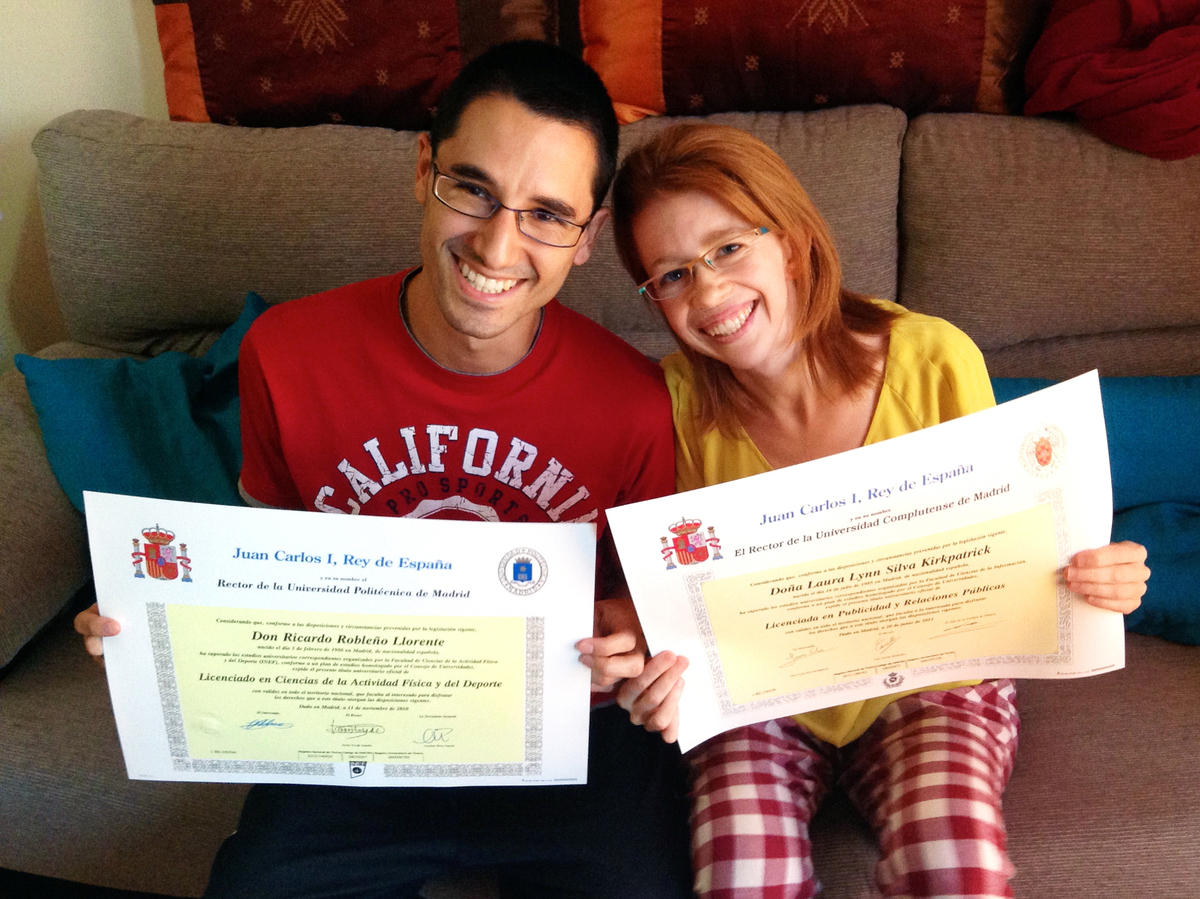 Ricardo Robleño Llorente and his wife, Laura Silva Kirkpatrick, show their college degrees at home in Madrid. Even though they have two bachelor's degrees and a master's between them, they were unable to find permanent work through most of their 20s, during Spain's economic crisis. "Why bother going to college at all?" Silva Kirkpatrick asks.

When NPR first met Laura Silva Kirkpatrick and her husband, Ricardo Robleño Llorente, they were both in their late 20s and both unemployed.

They considered themselves members of Spain's so-called "lost generation" and felt as though they'd lost their best years to the country's economic crisis. At the time, more than half of Spanish 20-somethings were out of work.

That was nearly 18 months ago.

Since then, Spain's economy has emerged from recession. Unemployment has dropped from its high of near 28 percent to around 21 percent this fall. Silva Kirkpatrick and Robleño Llorente have both since turned 30, and are both back at work — albeit in low-paid, temporary jobs.

"I don't even have an official contract. My job is more like a paid internship, so I have no rights," says Silva Kirkpatrick. "If I lose this job, I get no unemployment benefits."

Even though her native English language ability is a coveted skill — her mother is American — she still can't find a permanent job as an English teacher.

Robleño Llorente also rejoined the labor market as a temp, doing personal training at a gym.

In order to qualify for that job, Robleño Llorente had to register as a freelancer, calculating and paying his own payroll taxes, and had to show proof of both a bachelor's degree and a master's. He has since moved to a permanent contract at one of those gyms, working with electro-stimulus training for athletes, on a similar salary.

This is what economic recovery looks like in Spain. When Prime Minister Mariano Rajoy boasts he's added more than a million new jobs, it's people like Silva Kirkpatrick and Robleño Llorente he's talking about.

Their experience is a big part of what Spaniards will be weighing when they go to the polls in nationwide elections this Sunday.

Spain's economy is expanding by around 3 percent a year — one of the fastest growth rates in Europe. But 95 percent of new jobs are temporary ones — summertime tourism work or so-called zero-hour contracts, under which you're always on call but only paid when you work.

"Sometimes it's a nine-month contract or sometimes it's a permanent contract but with nine months of probation — so they fire you on the very last day," Laura explains. "That has happened to me, too."

So when Spaniards go to the polls, they'll be asking: Is this really recovery? Are things actually better? Nearly 70 percent of respondents in a recent national poll said Spain's economic situation is "bad" or "very bad."

"Our situation is better, because we're two years older. From crappy job to crappy job, you end up finding something a bit more bearable," Silva Kirkpatrick says with a shrug. "But the country as a whole? I think everything is pretty much the same, honestly."

She and her husband say they still feel like members of a lost generation. Many of their friends have moved abroad permanently — to Ireland, England, even China. Meanwhile, Spain's birthrate has plummeted.

"Where we are in life, compared to maybe other societies, countries or other generations, we are maybe eight years behind," Silva Kirkpatrick says. "Honestly, we have never had the opportunity to spend money! We became young adults when the crisis happened. That might be part of our personality and character forever."

Young professionals like this couple are fueling support for two new political parties — Podemos ("We Can") on the left and Ciudadanos ("Citizens") at the center-right. Both are challenging Spain's traditional two-party system.

Silva Kirkpatrick and Robleño Llorente say they plan to vote for Podemos and its leader, Pablo Iglesias, a ponytailed, 37-year-old former political science professor. He promises to raise working-class wages, increase taxes on the rich and eliminate the corruption that's tainted both traditional political parties, the conservative Popular Party and the Socialists.

But Spain's right-left divide dates back to the country's civil war of the 1930s, and many Spaniards tend to vote for whomever their parents and grandparents supported.

Despite its association with corruption and the old political order, the Popular Party of Prime Minister Rajoy is expected to win re-election — though it will likely have to woo smaller parties into a governing coalition.

NPR asked Silva Kirkpatrick and Robleño Llorente if they feel their voices are heard in Spanish politics.

"We'll see in the elections, I guess!" says Silva Kirkpatrick.

"I feel like we're being heard more than we were two years ago — yes," says Robleño Llorente. "Enough? I don't know."