Accessibility links
Iran Sanctions Could Be Lifted As Soon As January : Parallels The country has been dismantling parts of its nuclear program more quickly than many expected. When international inspectors confirm Iran has met its obligations, many sanctions will be lifted. 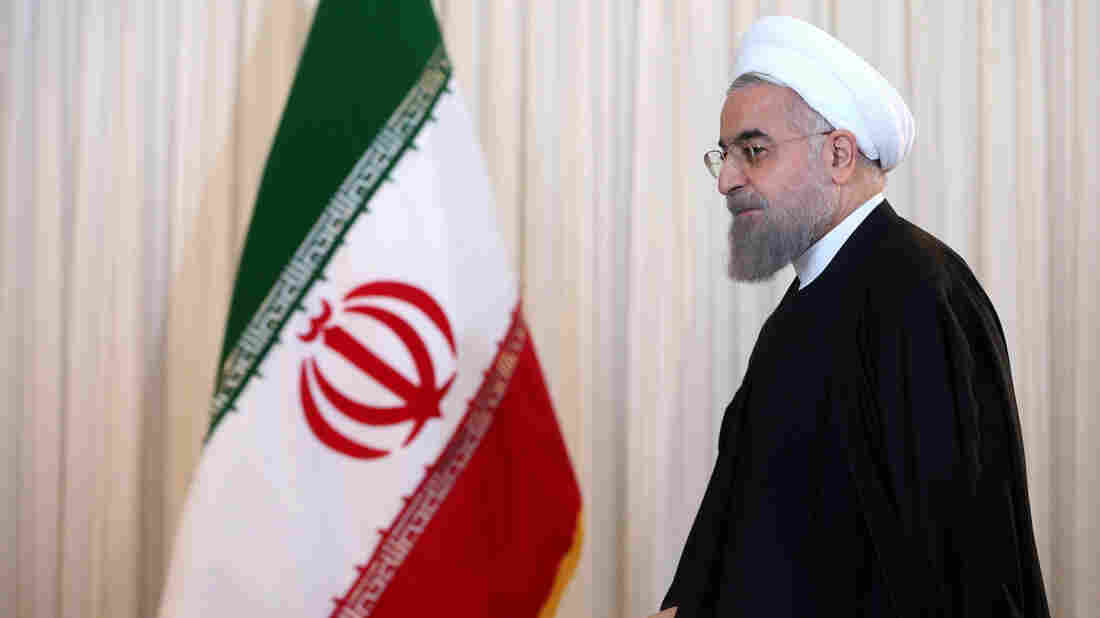 Iran's President Hassan Rouhani leaves after a televised speech in Tehran on Dec. 16. Iran has been dismantling parts of its nuclear program as required under an international deal, and some sanctions could be lifted as soon as January. Ebrahim Noroozi/AP hide caption 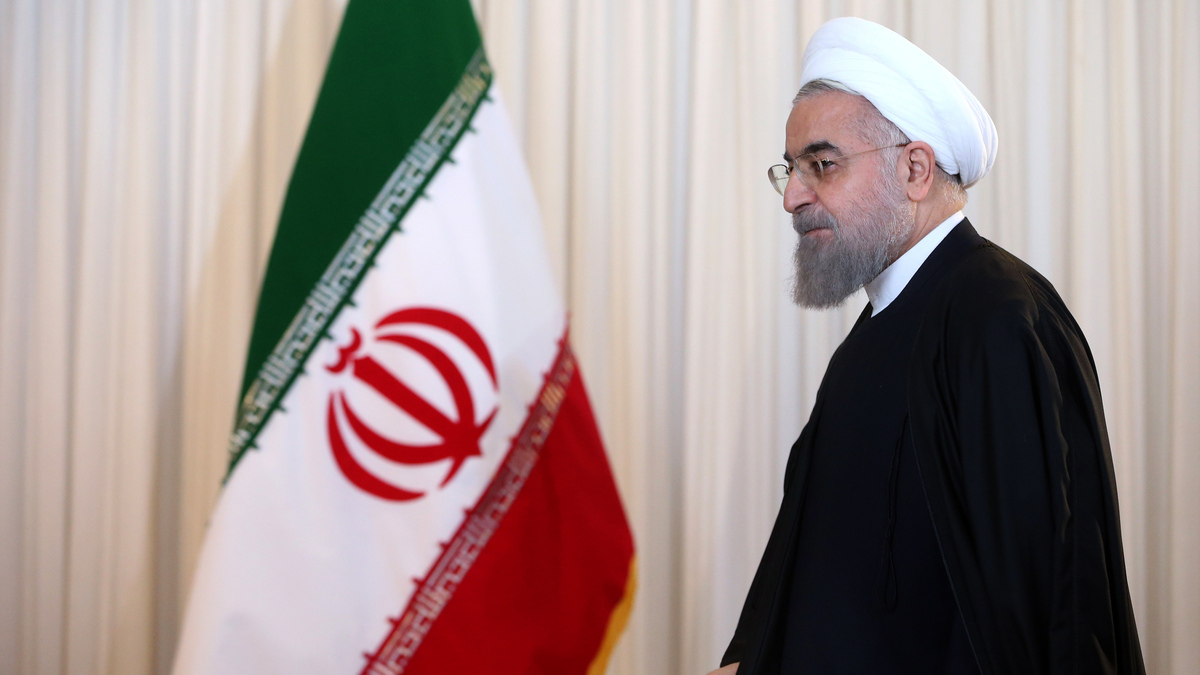 Iran's President Hassan Rouhani leaves after a televised speech in Tehran on Dec. 16. Iran has been dismantling parts of its nuclear program as required under an international deal, and some sanctions could be lifted as soon as January.

Iran has been dismantling parts of its nuclear program faster than many anticipated and could meet its obligations for the lifting of some sanctions as soon as January, according to some officials monitoring the agreement.

Iran's nuclear deal with world powers includes a key target known as "implementation day." No specific date was set when the agreement was reached last July to great fanfare.

Implementation day will arrive when international inspectors determine that Iran has taken initial steps to curb its nuclear program. In turn, Iran will get sanctions relief as promised in the deal.

Obama administration officials say the nuclear deal was front loaded, requiring Iran to take the first steps. The country must dismantle some two-thirds of its nuclear centrifuges and ship out or dilute a large portion of its enriched uranium.

Many analysts predicted this would not happen until the spring of 2016. But Iran says it plans to fulfill its part by January, and the International Atomic Energeny Agency, which is inspecting Iran's facilities, says this is possible.

Stephen Mull, the U.S. official who oversees the implementation of the Iran nuclear deal, calls this "crunch time."

"It is up to [the Iranians] to decide when they can do all this and the fact that they are doing it rather [more] quickly than anyone expected, we have a challenge to ensure that every step is verified perfectly," Mull said recently at a conference on Iran held at the Atlantic Council in Washington.

Under the deal removing some sanctions, "non-U.S. parties will be able to purchase unlimited amounts of crude oil, of gas from Iran without risk of U.S. sanctions," notes Adam Szubin of the Treasury Department. "Iran will regain access to the international financial system, by and large. The Central Bank of Iran will be allowed to move money and [have] access to its reserves."

Szubin says Americans will soon be able to import Iranian carpets, pistachios and caviar and U.S. companies will be free to sell airline parts to Iran.

An Iran Deal Milestone That Tehran Wants To Play Down

Hidden For Decades, Pollocks, Rothkos And More Go On Display In Iran

Other sanctions, though, will remain on the books. The Treasury Department is issuing detailed guidance to explain to Americans what is possible and what remains off-limits.

"For example, we are going to continue to be having sanctions, including secondary sanctions on Mahan Airlines," Szubin says. "Mahan Airlines has been and continues this very day to be the primary carrier of choice of the Quds Force in ferrying military equipment and arms to Yemen and to Syria."

The Quds Force is part of the Iranian Revolutionary Guards Corps and will remain on U.S. blacklists as will banks and companies linked to them. Still, critics of the Iran deal say that's not enough.

Mark Dubowitz of the Foundation for the Defense of Democracies says the Obama administration is giving away too much, too soon. He also says the U.S. should be pushing back against recent Iranian missile tests that violate United Nations resolutions and should press for the release of imprisoned Americans, including Washington Post journalist Jason Rezaian.

"The administration would have been wise to have taken a little more time," he says. The U.S. should "retain some economic leverage to push back against Iranian missile violations, support for terrorism and other illicit activities."

Dubowitz worries that the Revolutionary Guards Corps will benefit most from the sanctions relief on the key economic sectors it controls.

"The Revolutionary Guards ultimately get the greatest benefit from this deal," he adds. "They get all their money, they can continue their ballistic missile activity, their regional aggression. They can hold our hostages, they can arrest more of our hostages and they have a nuclear program that has just been put on pause."

A sanctions expert who used to work at the Treasury Department, Elizabeth Rosenberg, now with the Center for a New American Security, says the U.S. is pushing back and will continue to do so. But it has to balance the competing viewpoints on the Iran deal.

"It's inevitable that there will be dissatisfaction with the administration's approach," she says. "They are trying to walk a line between a very aggressive stance and a kind of constructive, perhaps accommodating approach to pursue their deal, implement their deal and see it moving forward."

Just this week, Secretary of State John Kerry responded to Iranian concerns about new congressional visa restrictions on people who visit Iran or other countries the U.S. classifies as state sponsors of terrorism.

Kerry's letter to his Iranian counterpart may have upset many in Congress, but Rosenberg says it is possible for him to play both good cop and bad cop when it comes to Iran.

"There are hard-liners all around who are going to make this agreement difficult and it may be useful for the U.S. administration to have the international community see clearly that it is working hard to implement its agreement," she says.