Accessibility links
U.S. Businesses Look To Cuba, But See Limited Opportunities So Far : Parallels Restrictions may be falling away, but there are no signs yet that commerce between the countries is about to take off. U.S. agriculture sales to Cuba are actually down, while American tourism is up. 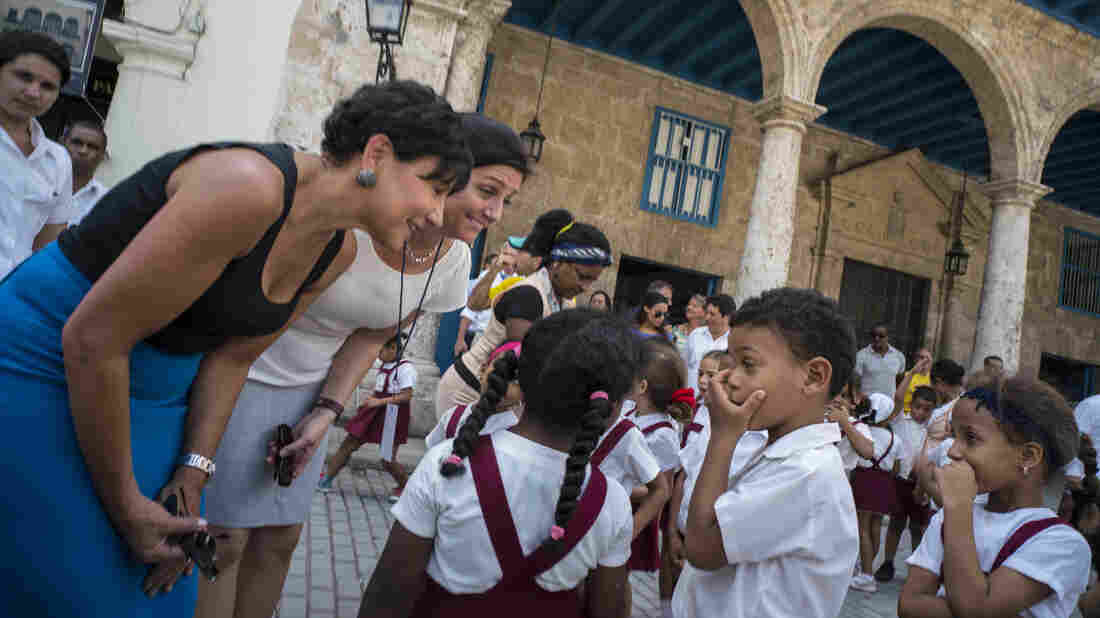 U.S. Commerce Secretary Penny Pritzker (left)talks with students in Havana in October. Pritzker led a delegation of U.S. officials who met their Cuban counterparts and businessmen to explore expanding ties. While restrictions are being removed, increased business links between the countries are limited so far. Ramon Espinosa/AP hide caption U.S. Commerce Secretary Penny Pritzker (left)talks with students in Havana in October. Pritzker led a delegation of U.S. officials who met their Cuban counterparts and businessmen to explore expanding ties. While restrictions are being removed, increased business links between the countries are limited so far.

When the U.S. and Cuba reopened their embassies this year, American businesses started to look for opportunities on the island. They are quickly learning, though, that it will be a tough slog.

John Kavulich, president of the U.S.-Cuba Trade and Economic Council, took a deep dive into the numbers and found that if you "make two columns and you have what the U.S. has gained and what Cuba has gained, Cuba has gained far more during the last year than has the U.S."

U.S. agricultural sales have been dropping steadily, falling by 37 percent, while U.S. travel to Cuba skyrocketed and U.S. dollar outflows were up 150 percent.

Even in the area of telecommunications, a priority for the Obama administration, U.S. companies have little to show but a couple of roaming agreements on the island.

That might benefit U.S. visitors, but it is a far cry from what Secretary of State John Kerry told a prominent Cuban blogger in Havana in August.

"We want every person in Cuba to be able to be connected," Kerry said, adding, "Our companies are very anxious to become involved in Cuba in helping to create that connectivity."

The Obama administration must be disappointed by the results, says Kavulich. Still, he predicts President Obama will continue to ease restrictions on Cuba so it will be harder for the next U.S. president to change course.

Commercial Flights To Resume From U.S. To Cuba

"Unfortunately, because of that, and because the Cuban government knows he wants to go to Cuba and they know he wants to create this landscape that can't be changed, Cubans, being good negotiators ... are basically sitting back and waiting for more," Kavulich said in an interview with NPR.

He would still like Obama to visit Havana to serve as the "gardener in chief," helping commercial ties take root so that American companies will become stakeholders in this new approach to Cuba.

If the purpose of this new policy is to empower the Cuban people, she argues, there should be no commercial exchanges with the Cuban military or intelligence services.

"That's not at all what has been done. The new areas that have been opened for commercial exchanges have been directly through the Cuban government," she said.

If Obama wants to visit Cuba in 2016, he should meet first with some of the dissidents whose rights have been eroded even as diplomatic ties were restored, Quintana says.

She doesn't see the U.S. making human rights a priority, though Kerry says that is what he is doing. On his one-day stop in Havana, Kerry told reporters traveling with him that the U.S. and Cuba won't have normal ties unless Cuba is "moving with respect to issues of conscience."

Obama, meanwhile, told Yahoo News he would go to Cuba if there's progress in the area of human rights.