Accessibility links
Slovakia's Migrants Keep A Low Profile In A Country Wary Of Outsiders : Parallels Slovakia has never been particularly welcoming to migrants and it resisted the most recent influx to Europe. Those who came a generation ago say they are still often seen as outsiders. 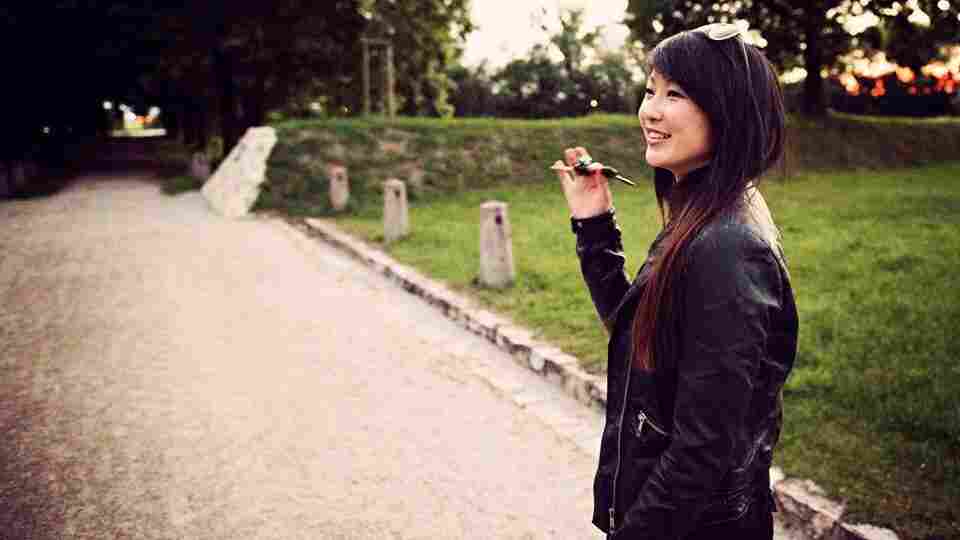 Claudia Tran, 21, was born and raised in Slovakia to Vietnamese immigrants. "People here are still really surprised if I speak Slovak with them," she says. "Because the assumption is, you don't look Slovak, you aren't Slovak." Courtesy of Claudia Tran hide caption 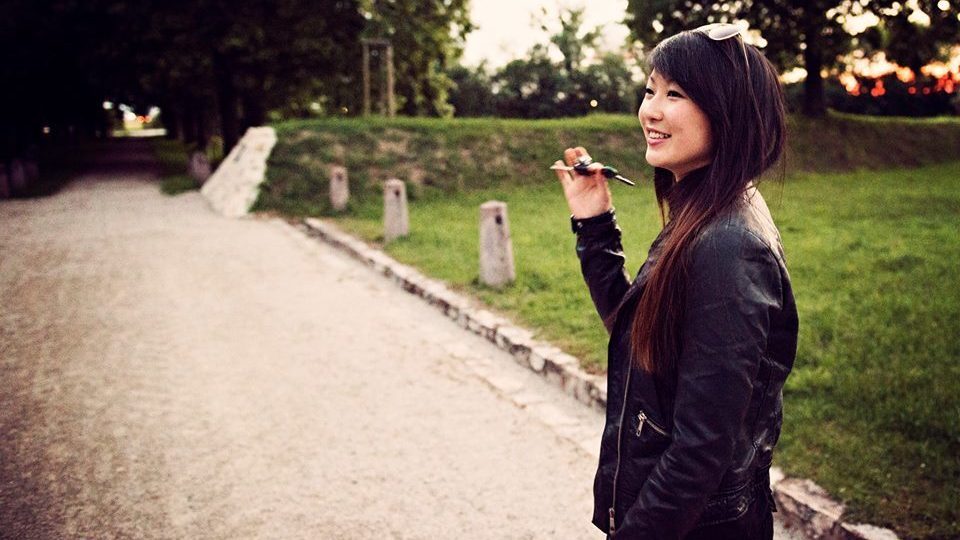 Claudia Tran, 21, was born and raised in Slovakia to Vietnamese immigrants. "People here are still really surprised if I speak Slovak with them," she says. "Because the assumption is, you don't look Slovak, you aren't Slovak."

The small eastern European nation of Slovakia has not exactly welcomed migrants.

The prime minister, Robert Fico, opposes refugees under a European relocation plan and has even linked migration to terrorism. In one town, Gabcikovo, 97 percent of residents voted against accepting refugees.

But a tiny migrant community has quietly lived and worked in Slovakia for decades, largely by staying under the radar.

We're driving along a street in a warehouse district of the Slovak capital, Bratislava, that's lined with Vietnamese businesses and an unpretentious restaurant that specializes in the Vietnamese noodle soup called pho.

He helps run the family textile business that's on this street. His family has imported and sold Vietnamese-made clothes in Slovakia for 18 years.

We pull up at the family warehouse on a Sunday. His aunt and uncle are working and greet us in Vietnamese. Inside, the warehouse is filled with colorful sweaters and pajamas, mostly for women and children.

"The Slovak people perceive us as very, very hardworking people," he says. "We practically don't have holidays." 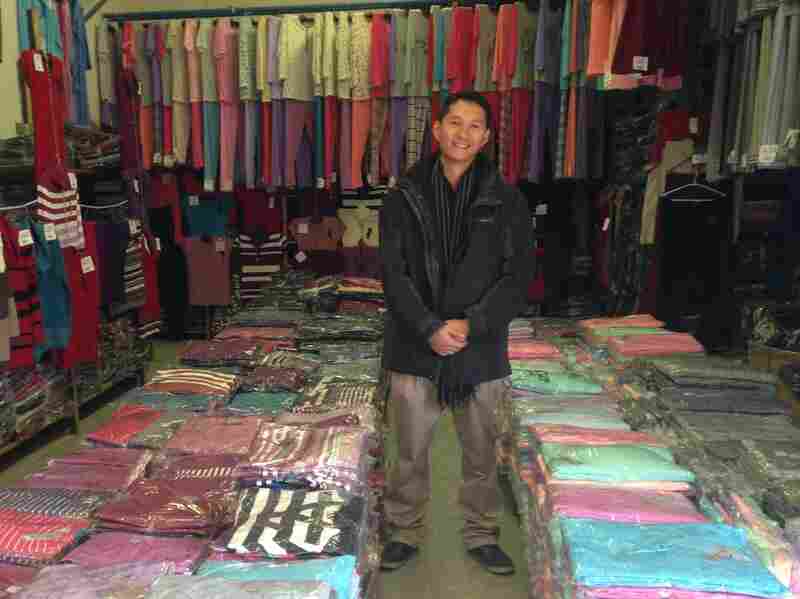 Nguyen Kien Trung, 32, stands inside his family's clothing warehouse in Bratislava. "It's a declining business, so we have to think out our future," he says. "I think I and other young Vietnamese have a good chance at finding work at a Slovak company. We speak the language. We know the culture." Joanna Kakissis for NPR hide caption 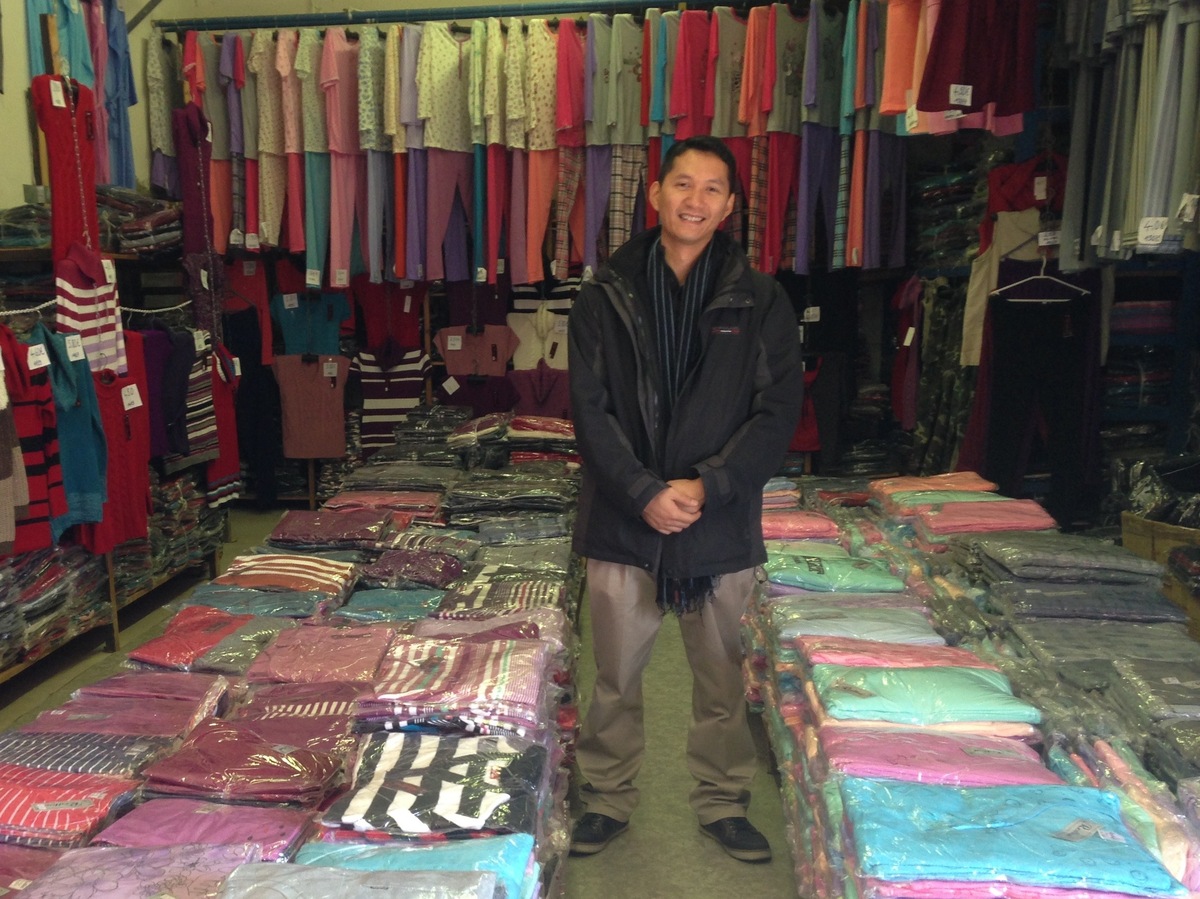 Nguyen Kien Trung, 32, stands inside his family's clothing warehouse in Bratislava. "It's a declining business, so we have to think out our future," he says. "I think I and other young Vietnamese have a good chance at finding work at a Slovak company. We speak the language. We know the culture."

His parents came to Slovakia about 30 years ago, when it was still part of Czechoslovakia. Like others from North Vietnam, they found opportunities in communist Eastern Europe. They did face racism and violence in some countries. But some established themselves as successful market vendors who especially flourished after the fall of communism.

About 300,000 Vietnamese, most of them from the north, now live in various Eastern European countries, mainly Russia and the Czech Republic.

Only 3,000 to 5,000 live in Slovakia, which gained independence in 1993 and where just a little over 1 percent of the population is foreign born.

I meet Claudia Tran, a 21-year-old university student who also manages a nonprofit, at a hipster cafe in a cobblestoned section of old Bratislava. She was born and raised in Slovakia to Vietnamese parents who came to Eastern Europe as top-notch students on university scholarships.

"And that's why my dad ended up in Poland and my mom ended up in Slovakia," she said. "They're both engineers."

They couldn't find work in their field in Slovakia, where they settled. "They sell clothing for children," Tran says.

"Everyone in Bratislava has seen at least one Asian in the city," she says. "But if I compare it to Vienna, which is a short train ride away and a huge multicultural city, there's a big difference."

In Bratislava, many Slovaks speak to her in English or assume she's a tourist. And they stare.

She's having hot chocolate with Lani Willmar, a 22-year-old university student from Corona, Calif. Willmar's parents fled South Vietnam by boat and came as refugees to the U.S.

Willmar is in Slovakia on a Fulbright, teaching English to Slovaks. One recent lesson was about multiculturalism, which every student in her class opposed.

"And I talked about how the U.S. is a multicultural society," she says. "And, yes, there are problems, yes there's racism, but it doesn't mean that you should write off multiculturalism completely. Because if that were the case, I wouldn't be (in the United States), and my family wouldn't be there, and life would be very different."

Migrants Find A Warm Welcome At This German School

Retired embryologist Eva Kellerova, like many Slovaks, is quick to point out that Slovakia — and Europe — are not like America. She's aware of the Vietnamese community in Slovakia but says "they came quietly," unlike the migrants now arriving in Europe.

She says her heart breaks watching TV footage of what looks like miles of exhausted families trudging through the mud and cold.

"But the situation is chaotic," she says. "I don't think so many people can ever fit in here."

"Slovaks are having an existential crisis," she says. "They worry that people will come here and build mosques and change life as they know it."

Daniela, like many bright young Slovaks, is studying abroad, in Scotland, and does not plan to come home anytime soon.

She's part of the brain drain that's turning Slovakia into an aging society — a society that might benefit from an infusion of immigrants.