Accessibility links
Surrounded By Troubled Neighbors, Turkey's Conflict At Home Escalates : Parallels Turkey's army and Kurdish factions are battling regularly in the southeast part of the country, displacing thousands. The resumption of fighting has largely been overshadowed by regional turmoil. 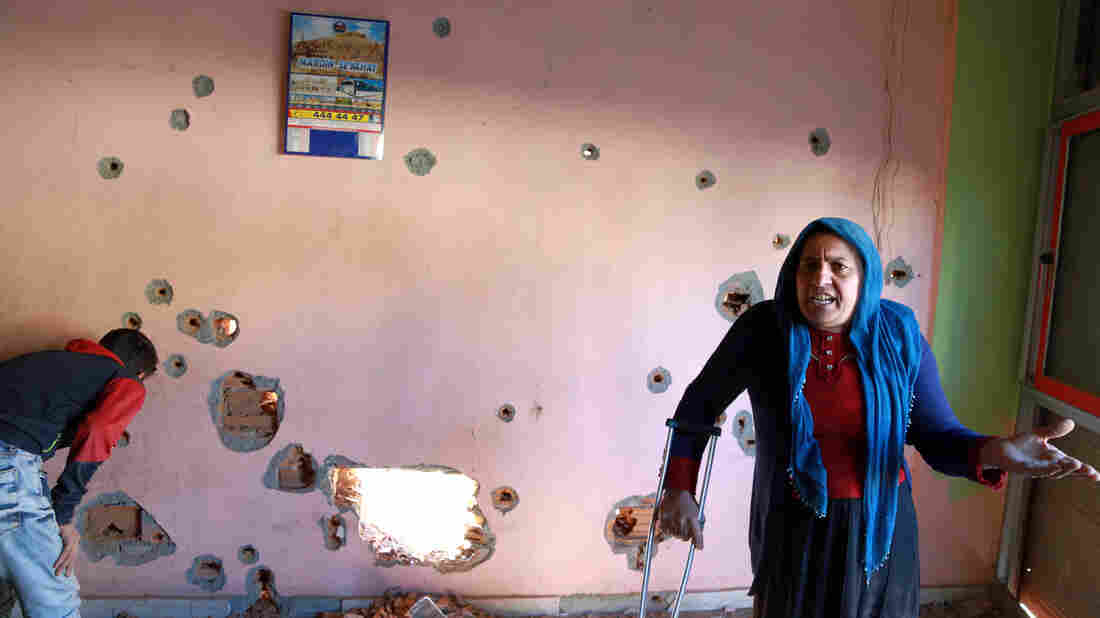 A woman complains inside her house in Nusaybin, Turkey, on Dec. 25. Tens of thousands of civilians in southeast Turkey have been caught in the middle as government forces and Kurdish militants battle. Murat Bay/AP hide caption 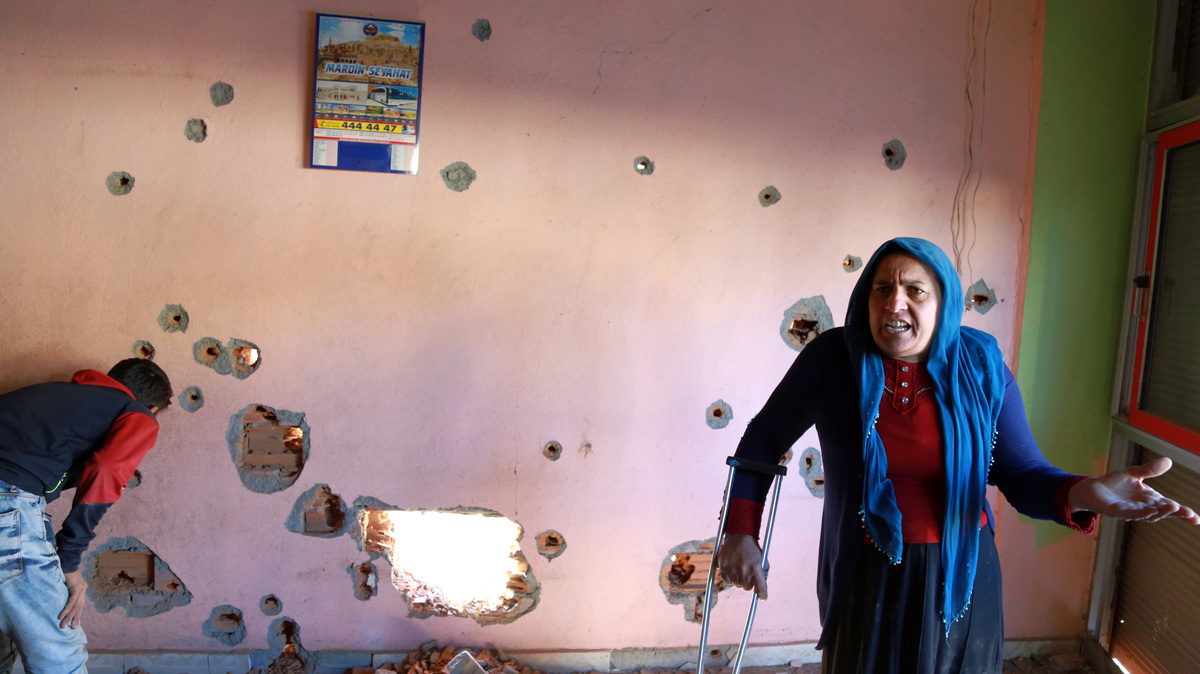 A woman complains inside her house in Nusaybin, Turkey, on Dec. 25. Tens of thousands of civilians in southeast Turkey have been caught in the middle as government forces and Kurdish militants battle.

Turkey seems to be surrounded by conflicts these days — in neighboring Syria and Iraq, and tensions are running high with Russia. The fight getting the least attention is the one taking place on Turkey's own soil.

Turkish security forces resumed operations against minority Kurdish fighters last summer after peace talks broke down. The fighting in the southeast has escalated, with Kurdish areas locked down under military curfews and deadly risks facing those who do venture out.

Medical workers have been among the recent victims, says Fadime Kavak with the Turkish Medical Chamber. The latest casualty was Abdul Aziz Yural, a nurse who was shot by a sniper while treating a neighbor in the town of Cizre.

Another nurse, Eyup Ergen, was killed by a sniper while trying to get home, she adds. In addition, "an ambulance driver, Seyhmuz Dursan, was killed, also by a sniper, while out on an emergency call."

Turkish officials deny that their forces target health care workers or civilians. With much of the conflict zone locked down, independent confirmation is extremely difficult.

Turkey's President Recep Tayyip Erdogan, who once backed peace talks with the militants of the Kurdistan Workers' Party, or PKK, is now using some of his harshest rhetoric in years to describe the conflict. He recently dismissed Kurdish demands for greater rights and autonomy as nonissues.

"Turkey doesn't have a Kurdish problem," Ergodan said. "Turkey has a terrorism problem." 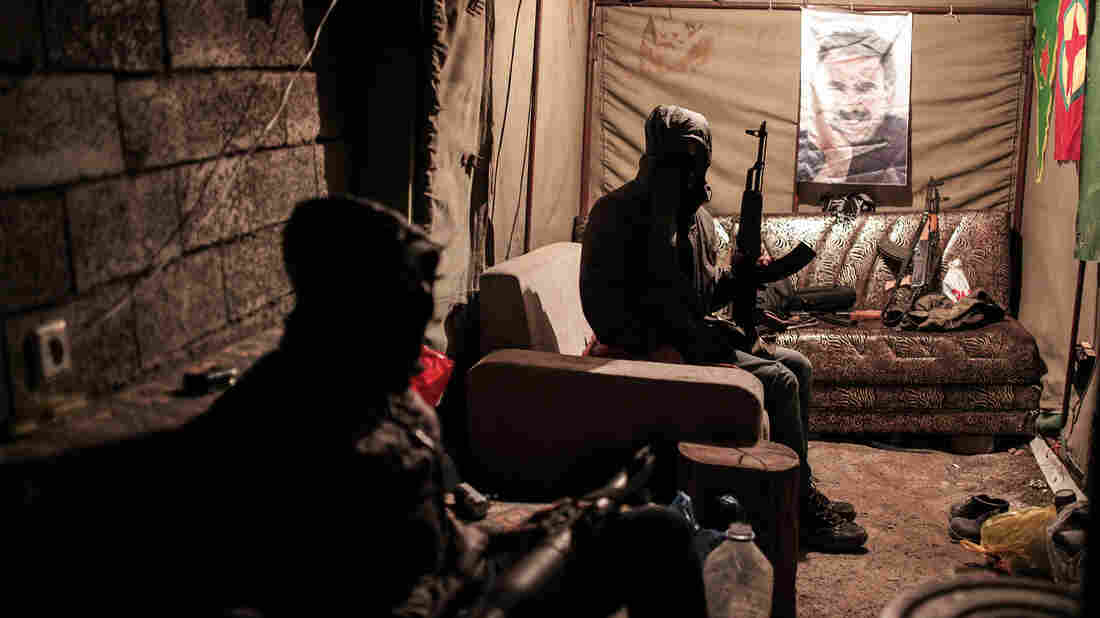 Militants of the Kurdistan Workers' Party, or PKK, in a bunker in Sirnak, Turkey, on Dec. 23. The militants and the Turkish military have been fighting regularly in southeast Turkey. A poster of jailed PKK leader Abdullah Ocalan is in the background. Cagdas Erdogan/AP hide caption 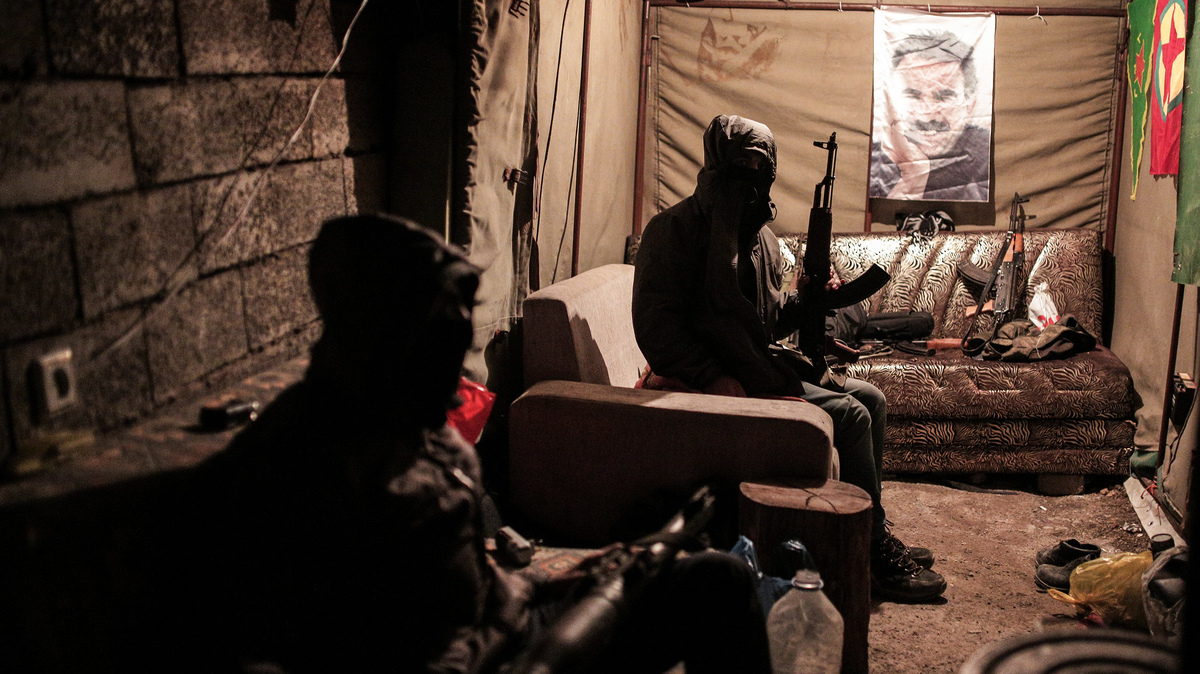 Militants of the Kurdistan Workers' Party, or PKK, in a bunker in Sirnak, Turkey, on Dec. 23. The militants and the Turkish military have been fighting regularly in southeast Turkey. A poster of jailed PKK leader Abdullah Ocalan is in the background.

For residents of the old city in Diyarbakir, the largest city in southeast Turkey, or towns such as Cizre or Silopi, the problem is daily life.

Thousands of people have been displaced, and those who remain are at risk. PKK neighborhoods are riddled with trenches, and young men are armed with AK-47s. The security forces use helicopters, armored vehicles and heavier weapons in pursuit of Erdogan's mandate to eliminate the PKK threat.

It's a promise Turkish leaders have been making for more than 30 years.

This spring, there was some hope that a new political force, the pro-Kurdish People's Democratic Party, would bring fresh momentum to the peace talks. But now party co-leader Selahattin Demirtas is under threat of prosecution for supporting autonomy for Kurdish towns, and Erdogan has referred to a possible need to close the party down.

The situation seems especially bleak now, says Nigar Goksel with the International Crisis Group, because both sides think time is on their side.

"They both argue that their hand is getting stronger and the other side is getting weaker by virtue of the escalation in southeast (Turkey)," she says.

Turkey wants the PYD branded as terrorists, something the U.S. has resisted.

Caught In The Crossfire

"The 2 1/2 year cease-fire really gave people hope," he says. "You can really see this, and people are expressing the wish to go back to those times. This is probably something which both sides can still build upon."

If and when talks resume, there may be a move to craft a peace process that also involves Syrian Kurds to some extent, say analysts Mandiraci and Goksel.

But they also know that the time for that kind of optimism is some ways down the road.