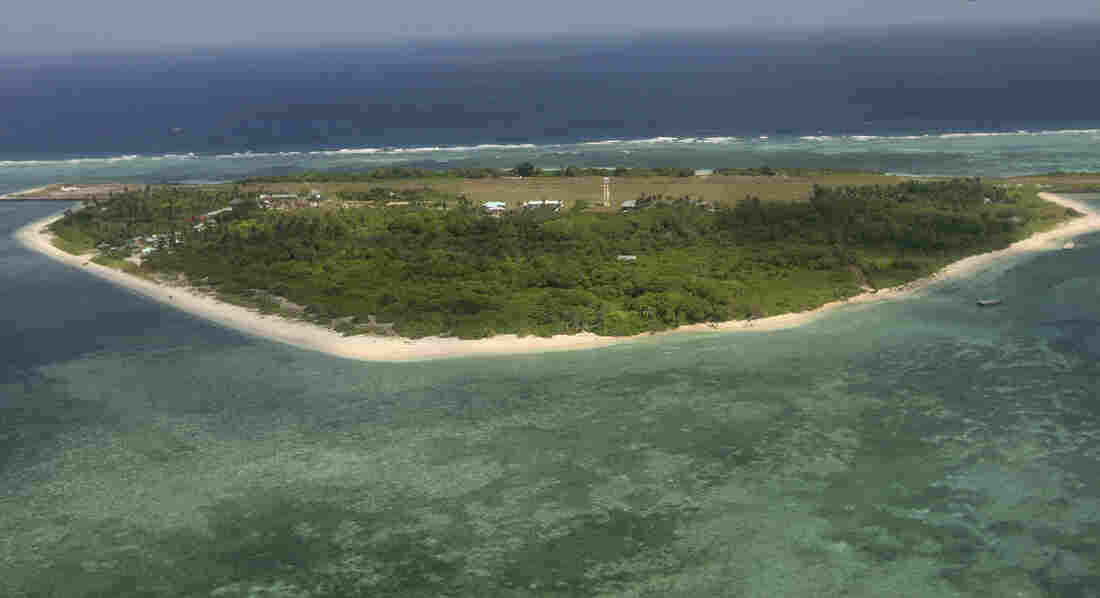 Pag-asa island, part of the disputed Spratly group of islands in the South China Sea, is claimed by both the Philippines and China. It's the only inhabited island in the Spratlys. Rolex Dela Pena/Pool/AP hide caption 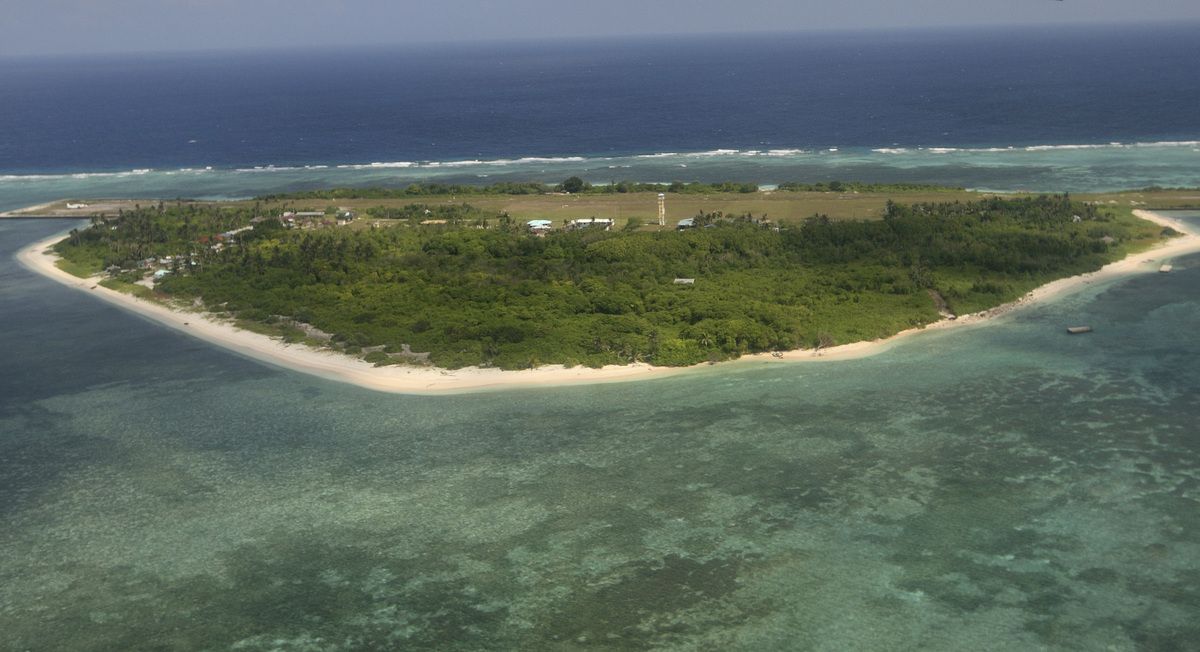 Pag-asa island, part of the disputed Spratly group of islands in the South China Sea, is claimed by both the Philippines and China. It's the only inhabited island in the Spratlys.

It wasn't so long ago, says Eugenio Bito-onon Jr., that everyone in the Spratly Islands, his patch of the South China Sea, pretty much got along.

"Oh yeah, it was really very peaceful," says Bito-onon, a Filipino who's served for the past five years as mayor of this archipelago of more than 100 small islands and reefs.

"Even the fishermen were friendly, and fishing boats from different countries like Vietnam, China, Hong Kong, they're just docked side by side," he says, speaking to NPR on Palawan, a Philippine island east of the Spratlys. "And they exchange cigarettes, exchange liquor. You don't hear anything about a commotion or heightened conflict — there's no such thing." 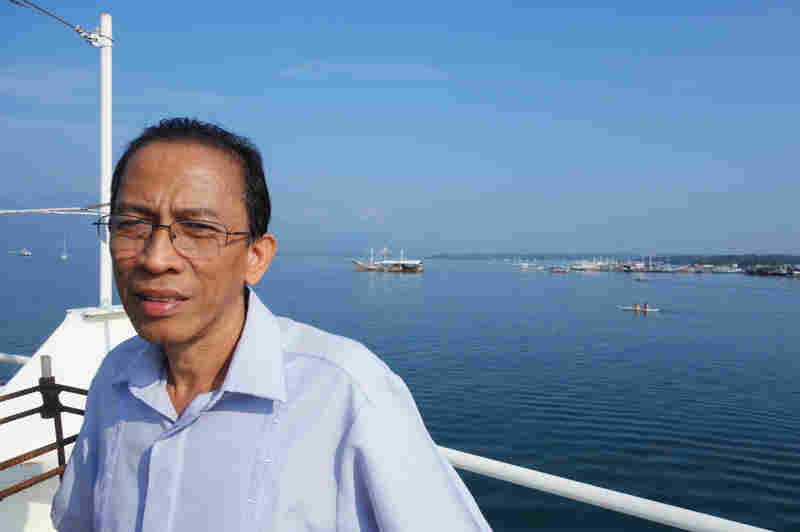 Mayor Eugenio Bito-onon hopes an international court will rule in favor of the Philippines this year in a case it's brought against China over the disputed South China Sea areas. Michael Sullivan for NPR hide caption 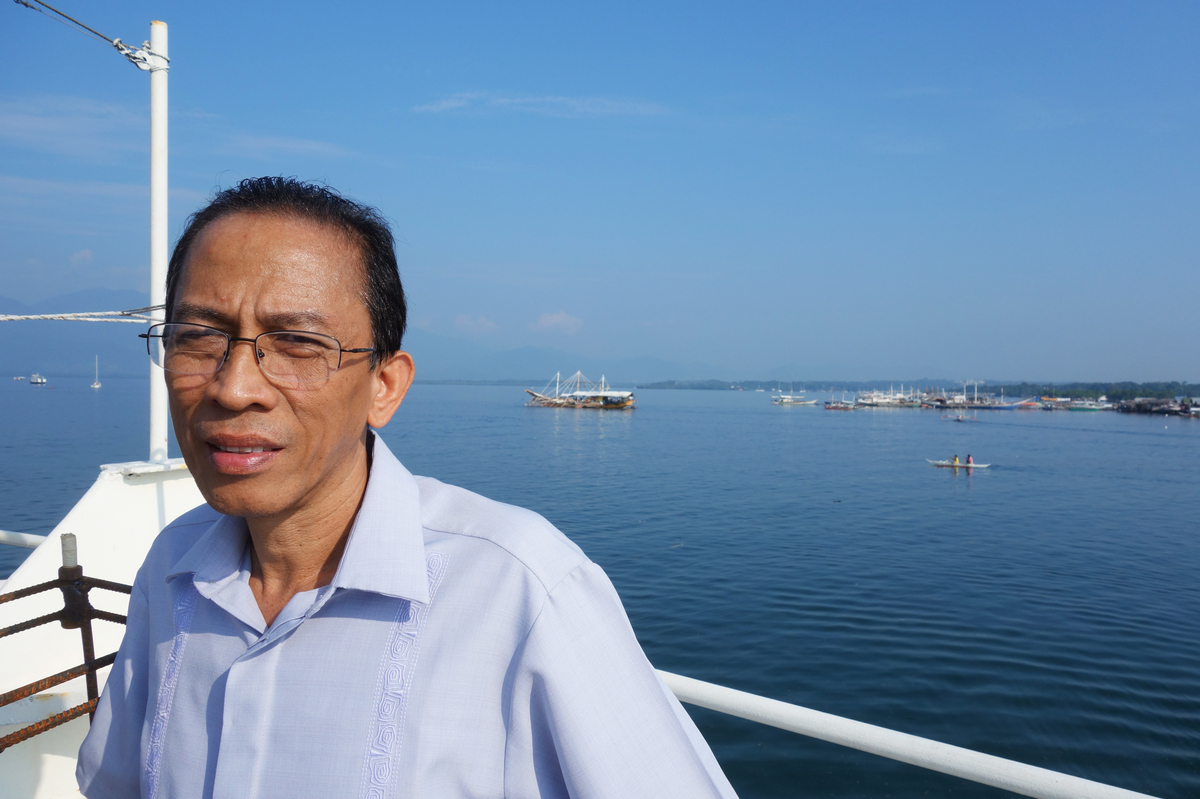 Mayor Eugenio Bito-onon hopes an international court will rule in favor of the Philippines this year in a case it's brought against China over the disputed South China Sea areas.

Today, things are different, as Bito-onon finds himself and his islands on the front line of a territorial dispute between China and its neighbors. China claims almost all the waters and territories of the South China Sea as its own — an oil- and gas-rich area that's also one of the busiest shipping routes in the world.

The area in dispute includes Pag-asa, the island that Bito-onon calls home, and that's claimed by the Philippines as well. It's the only inhabited island in the Spratlys.

At the end of December, China demanded that the Philippines withdraw from Pag-asa — which the Chinese call Thitu — after a group of Filipino protesters traveled to the island to draw attention to China's actions in the region.

And then there's the construction. From Pag-asa, the mayor says, it's easy to see Chinese workers filling in nearby Subi Reef and creating an artificial island, complete with a military-capable airstrip.

"It's a small city, lots of lights, and you can see clearly the high-rise crane that's doing the construction there," he says. "During the day, you can see the tip of the runway when the horizon is clear."

That construction, he says, is making some residents on his island fearful.

"In the middle of the night, [a] certain wife called me up about these rumors of war and invasion," he says. "She was crying, said, 'I want my husband to go back to the mainland.' So I let her husband leave the island."

Four times a year, a boat travels to Pag-asa carrying provisions — rice, noodles, cooking oil. Everything the roughly 120 civilian residents depend on has to be delivered by boat or — in emergencies — by the military, which maintains a small garrison there.

In the Philippines, many, including Bito-onon, worry that China has its eye on the energy-rich Reed Bank, a seamount located between Pag-asa and the Philippines mainland, well inside the 200-nautical-mile exclusive economic zone claimed by the Philippines.

This is an area that Bito-onon calls the Philippines' "submerged Saudi Arabia."

"The Reed Bank has energy deposit almost bigger than Kuwait," he says. "So we should not lose that."

Bito-onon also worries about two other reclaimed reefs where China has been busy building airfields.

"We have to be vigilant because of the salami tactics of China," he says. "Because they take one place at a time. Now they have taken the Scarborough [Shoal]. Mischief Reef, they're doing an airport. So what comes next?"

If necessary, he says, the Philippines should be ready to fight for the Reed Bank. But he hopes it doesn't come to that, and that an international court will rule in favor of the Philippines this year in a case it has brought against China over the disputed South China Sea areas.

He also hopes the United States will help discourage China from new construction or declarations of sovereignty, and that the U.S. continues to insist on protecting freedom of navigation in the area.

In its haste to create new artificial islands, Bito-onon warns, China is ignoring the environmental damage it's causing. When he first came to the Spratlys almost 20 years ago, "I said, 'It's perfect. When you look underwater, wow, it's like an aquarium, lots of fish, corals.' " Now, he says, "massive corals" are being destroyed.

"Everything in [the Spratly Islands] comes from the sea," he says. "It's the livelihood. And if there's no arbiter, broker for peace and harmonious co-existence ... it will all be destroyed, there will be no livelihood. It will be a useless place. Except for the oil."

Still, he's hoping for the best. His dream is to make the Spratlys a protected ecotourist destination to be shared and enjoyed by everyone. The name Pag-asa, after all, translates as "hope."