Accessibility links
Responding To Nuclear Test, S. Korea Cranks Up The K-Pop : Parallels South Korea is again blaring news, music and propaganda from banks of loudspeakers along the border. At a minimum, it seems to annoy North Korea. 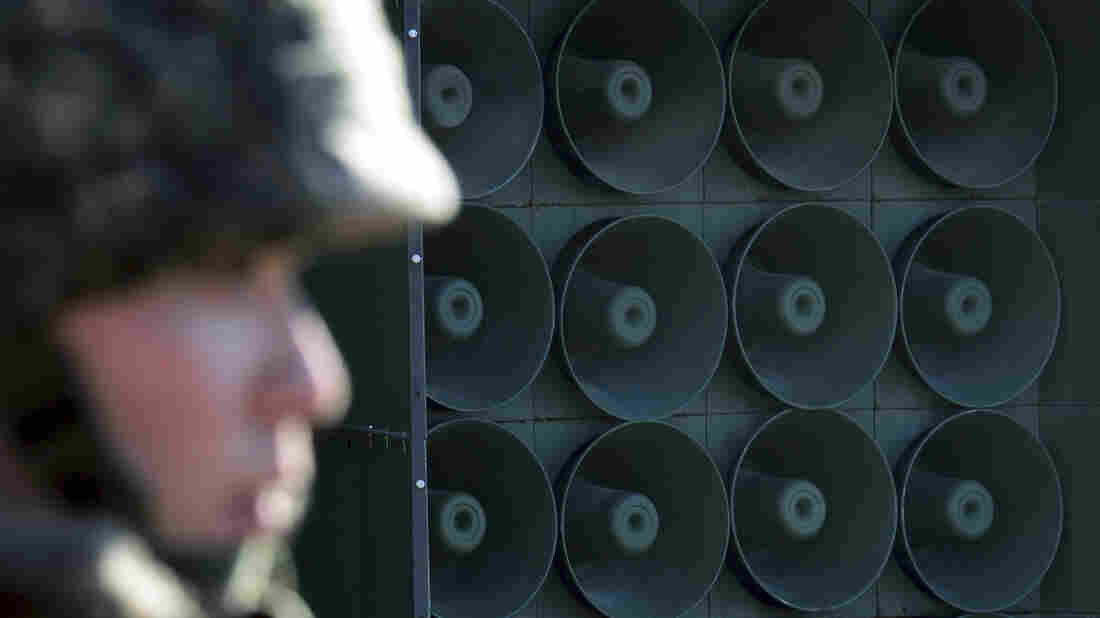 A South Korean soldier stands next to loudspeakers near the border with North Korea on Jan. 8. South Korea responded to the North's latest nuclear test by resuming the broadcasts that include news, criticism of the North Korean regime and pop music. Lim Tae-hoon/AP hide caption 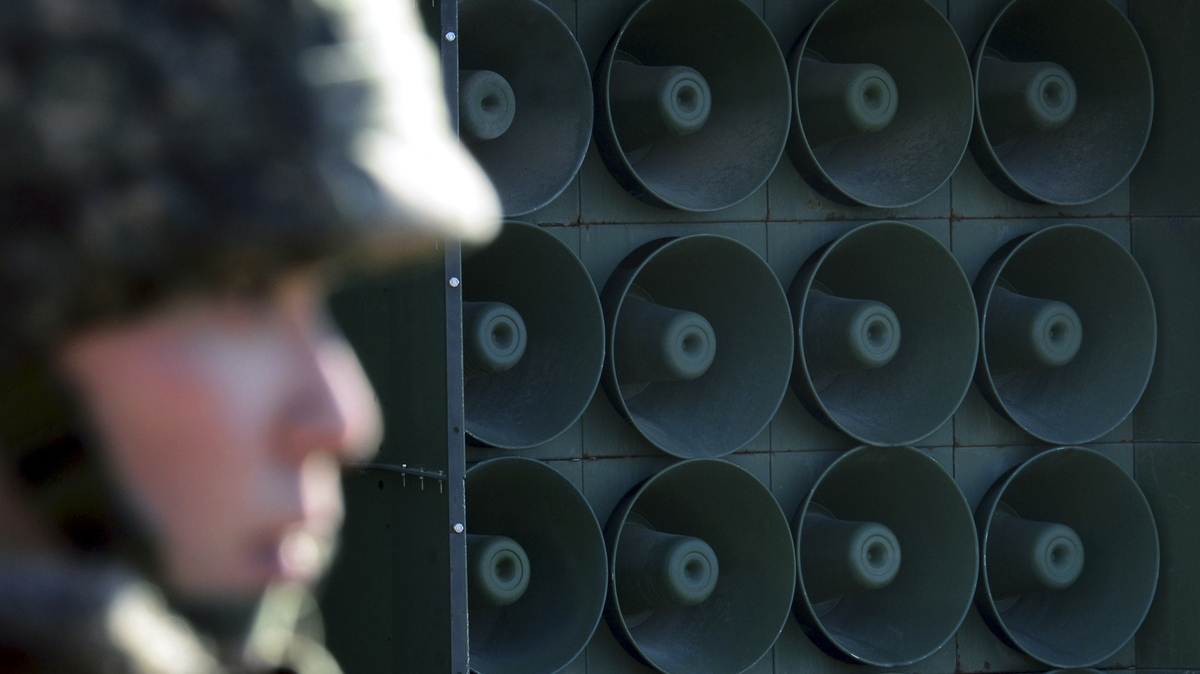 A South Korean soldier stands next to loudspeakers near the border with North Korea on Jan. 8. South Korea responded to the North's latest nuclear test by resuming the broadcasts that include news, criticism of the North Korean regime and pop music.

On the South Korean side of its 151-mile border with North Korea, banks of loudspeakers are back on, blaring propaganda. It's the South's response to the North's nuclear test last week. The speakers, which broadcast everything from news to K-pop, come on at random times, often at night, and can reach as far as 12 miles into North Korea.

"I can't really make out what they're saying," says South Korean Nam Tae-woo, 83, who lives in a village just outside the demilitarized zone in the town of Paju.

The speakers do seem to annoy North Korea. When they were last turned on, in August, North Korea was so incensed it shifted into a self-declared "quasi-state of war." 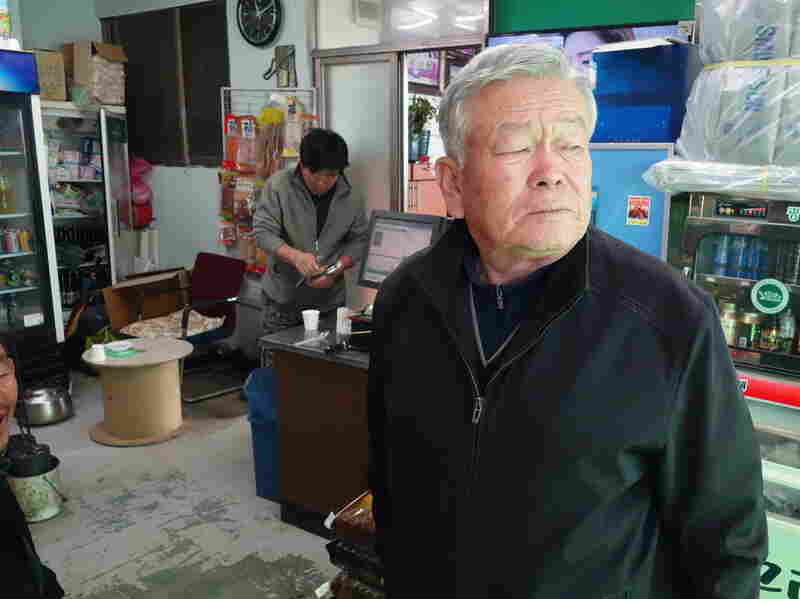 Nam Tae-woo, 83, is a South Korean villager in Paju, inside the demilitarized zone. He says he has been hearing the South Korean loudspeaker broadcasts late at night. Elise Hu/NPR hide caption 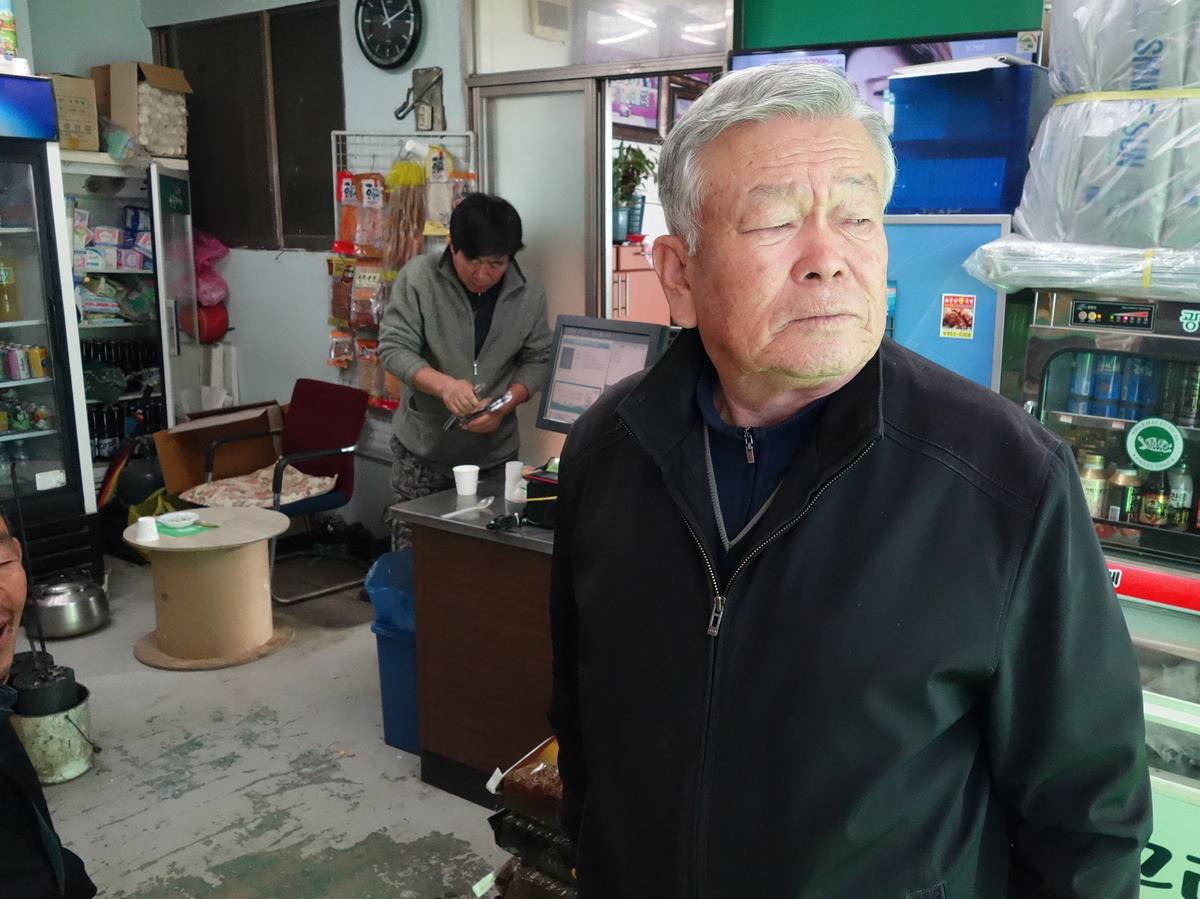 Nam Tae-woo, 83, is a South Korean villager in Paju, inside the demilitarized zone. He says he has been hearing the South Korean loudspeaker broadcasts late at night.

"They say things critical of the [North Korean] regime, and these are leaders that are treated like deities. In many ways, it's what the leadership's legitimacy is staked on," says Nat Kretchun, who analyzes North Korean information flows for InterMedia, based in Washington, D.C.

He says the loudspeakers are better understood as political actions rather than something that can change hearts and minds.

"It's really hard to know what a proportional response to a nuclear test is, if you're South Korea," says Kretchun. "For your own populace, for the rest of the world, you want to do something that is looking like you are responding. And they found that turning on these loudspeakers really elicits a lot of intense reaction on the North Korean side, which at least gives the illusion of effectiveness on some level."

Despite skepticism about their effectiveness, the South Korean government defends the broadcasts as an effective tool in psychological warfare.

"Truth is the most powerful weapon toward a totalitarian regime," South Korean President Park Geun-hye said at a news conference Wednesday.

"When we listen to the accounts of North Korean defectors, the soldiers who were placed on the front line, they said at first they didn't believe the propaganda broadcasts, but later they did believe it, and that was the reason for them to come to South Korea," she said.

South Korea To Resume Broadcasting Propaganda To The North Over Loudspeakers

The speakers on the inter-Korean border started in 1962 and didn't stop until 2004. After an 11-year break, South Korea restarted them last August in response to border land mines maiming two South Korean soldiers. A few weeks of escalating tensions followed, until the two Koreas brokered a deal to stop the broadcasts — unless something violated the deal.

The Defense Ministry isn't saying specifically where to find their banks of speakers, or what time the broadcasts go on. But if you can get close enough at the right moment, you can hear the muddy messages, which sound like they're coming from rickety drive-thru speakers.

A Blast Of K-Pop

The content includes news broadcasts, weather updates, digs at the regime of North Korean leader Kim Jong Un and a little entertainment to show the world has changed, according to the Defense Ministry.

The song selections this time around include a traditional Korean song, "Living 100 Years," K-pop hits like "Bang Bang Bang" by Big Bang, and girl group GFriend's take on "Me Gustas Tu."

The K-pop is intended to show North Korea that the world has modernized, the Defense Ministry says.

For villagers like the octogenarian Nam, the latest loudspeaker fight doesn't give him much hope he'll ever see his childhood home again.

"I'm exhausted by the wait to return home," he says. "My home is across the river."

Nam is originally from a place that's now part of North Korea. Given the decades of divide, those propaganda messages are reaching farther across the border than he can.