Accessibility links
A Belgian Playwright Tackles Muslim Radicalization With Comedy : Parallels "We have a problem," says Belgian Muslim playwright Ismaël Saïdi. His solution: writing and producing a comedy play about three men who go to fight a holy war. It's become an unlikely hit in Brussels. 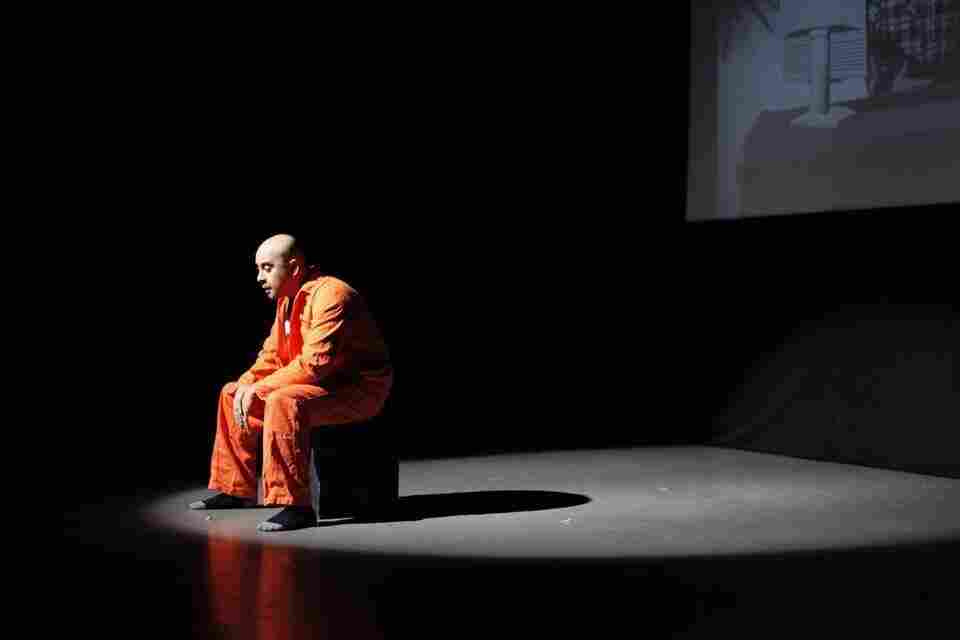 Performing in his play Djihad, writer/director and lead actor Ismaël Saïdi plays a character lamenting his life in prison upon returning from fighting in Syria. Courtesy of @djihadcompany hide caption 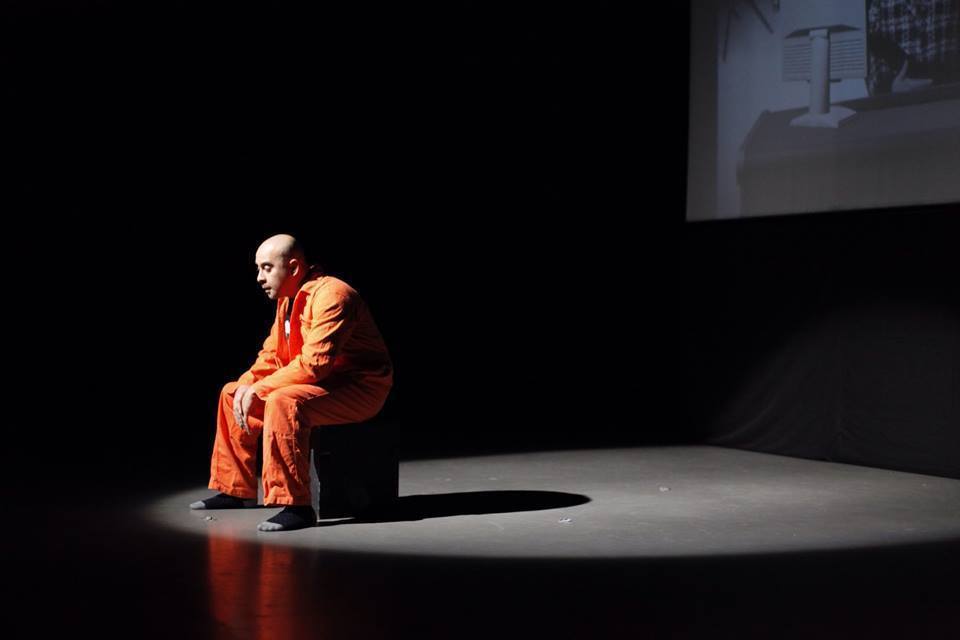 Performing in his play Djihad, writer/director and lead actor Ismaël Saïdi plays a character lamenting his life in prison upon returning from fighting in Syria.

Editor's Note: This story was originally published on Jan. 17. "We have a problem," Belgian Muslim playwright Ismaël Saïdi said at the time, referring to the radicalization of young Muslims. In the wake of the Brussels bombing, we are republishing it now.

But he doesn't mind if it does.

"As an artist," Saïdi says, "it was important for me to say that we can use any word" — regardless of whether it is sacred for some.

As a leading Muslim voice advocating integration in a city that produced several perpetrators of the Nov. 13 Paris terror attacks, Saïdi knew exactly what he was doing.

As shocking as the title may seem, the play is a comedy.

"People were scared at the beginning," he recalls. "'Are they going to talk about terrorism? Bombs?'"

Before its premiere in December 2014, Djihad's public relations director couldn't even get journalists to answer the phone. "They didn't want to even write the name 'Djihad' in their cultural [listings]," Lucile Poulain says. "They thought we were a threat, actually." 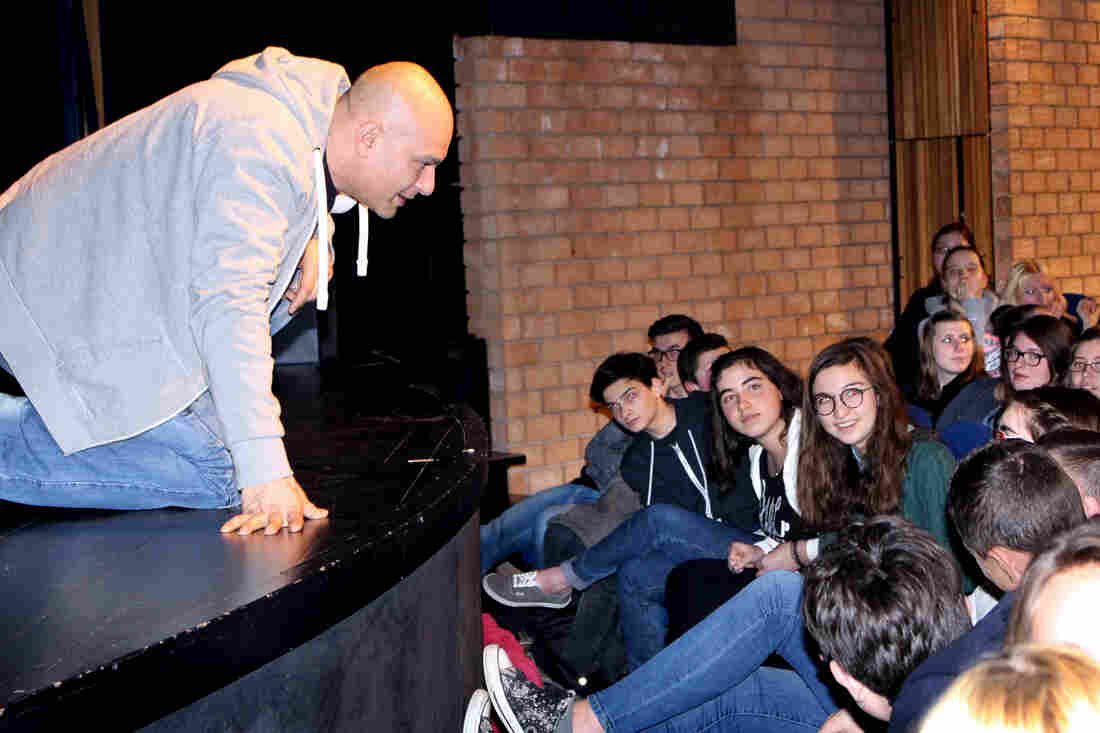 Belgian actor Shark Carrera, who plays a Lebanese Christian in the play Djihad, talks with students from the Collège Notre Dame de Bon Secours in Binche, Belgium, after a performance on Jan. 7. Teri Schultz for NPR hide caption

The exodus of youth to join Islamist insurgents in the Middle East is an extremely sensitive topic in Belgium. The nation of just over 11 million people has seen more than 440 citizens travel to Syria to fight, the highest number per capita of all Western countries, according to King's College International Center for the Study of Radicalization.

Saïdi says when he explained his play was actually a humorous look at three young Belgian Muslims who set off to fight a holy war, the response was even more dismayed. "Are you crazy, man?" some exclaimed.

But "crazy" has worked. Saïdi's story of three hapless young men who find themselves launched from a park bench in Brussels to the killing fields of Syria has become a sensation, going from an initially scheduled five performances to more than 100 now, with dozens more planned.

Once word got out that Djihad was actually an appeal against radicalization, the Belgian Education Ministry asked the troupe to continue performances — and paid for schools to bring their students. The play has been translated into Dutch and will go to Paris this spring.

Saïdi, 39, wrote and directed Djihad, and plays the lead. One of the other main characters, a dapper guy named Ben Hamidou, gets a lot of laughs as he secretly plays out his Elvis obsession, complete with hip gyrations, while his friends sleep.

As the audience claps and sings, cheering Hamidou on, people seem to forget he's a radicalized foreign fighter, using a rifle as a microphone, standing guard over his fellow newly minted militants as they sleep in the Syrian desert. That's exactly the reaction Saïdi wants.

Saïdi's lighthearted treatment of the subject is underpinned by serious concerns. Extremists tried unsuccessfully to recruit him to fight in Afghanistan when he was just 14, something he says would been applauded in his mosque in the Brussels neighborhood of Scharbeek. The same district hosted a suspected bomb-making hideout of the November Paris attackers.

As a young man, Saïdi reacted to his neighborhood's tensions by becoming a policeman — but many of his peers did go to Afghanistan. He hasn't seen them since. Belgian society and government knew extremists were recruiting young Belgian Muslims back then, he says, but "let them go because they saw it as a fight against the Russians" during the Cold War.

And, he says, the same has been true more recently. As young Belgians have joined forces opposing Syrian President Bashar Assad, "at the beginning, [authorities] knew it and they let them go to Syria, too. Everybody knows it."

He says Belgium only saw this as a real danger once the radicalized youth were "coming back to kill here." ISIS-affiliated European citizens are believed to be responsible for many, if not most, of the recent terror attacks and threats in Europe.

Saïdi finds it essential to use culture to address these dangerous trends in both his own Muslim community and the rest of society. And he believes he's found the secret for doing so effectively: "What we are doing on stage is we are laughing about us first — us, the Muslims," he says. "I'm laughing about me. And then I'm laughing about society. I think we can laugh about anything if you begin with yourself."

Though the first audiences more than a year ago were heavily Muslim, its popularity soon spread. Saïdi estimates more than 41,000 people of all religious and political persuasions have seen the play now.

By portraying the characters as real people, not stereotypical terrorists, Saïdi draws the audience into empathizing with their feelings of isolation, hopelessness and confusion. The characters discuss various interpretations of Islam and reject the most dogmatic.

The three friends end up befriending a Christian; one decides to return to Belgium and pursue the love of his life, a non-Muslim woman he'd abandoned at his mother's insistence.

"If you have the ability to feel something about those guys," Saïdi says, "maybe everything's not over."

The formula worked with students from the Collège Notre Dame de Bon Secours in Binche, Belgium, who saw the play earlier this month. Amandine Falcicchio, 17, said she already knew "there's an integration problem here in Belgium," but the play helped her better understand those who actually experience it.

Her classmate, Emma Innocente, said she'd gone to the performance unsure she would be able to laugh about something as serious as jihad. But she did. "I hope we find a way not to forget what we saw," Innocente said.

Caroline Wallez, a teacher, said the school plans to incorporate the play's messages into its programs. Following his collaboration with the education ministry, Saïdi published a book including the script of his play, plus a pedagogical section designed to help continue examination of the issues among students after the curtains close.

Still, Saïdi maintains that the main responsibility for resolving young Muslims' feelings of exclusion and disillusion lies within their own community. "We have a problem," he says. "We as Muslims create the origin of what we call today as radicalization. We create it."

And, a year after journalists from the French satirical magazine Charlie Hebdo were killed for what was seen as their mockery of Islam, Poulain, the public relations director, says the Djihad team is aware of the risks they're taking. Some theaters have canceled performances over security fears.

"Of course, we are afraid ourselves," Poulain says. "But the comedians are very courageous, very brave. And they want to stand for something." Something other than the applause they're getting all over a country struggling to save its children from the other — very unfunny — version of jihad.