Accessibility links
The Syrian Orphans Keep Coming, But There's Not Enough Space : Parallels Most Syrian refugees are children, and many have lost parents. One result is a huge demand for the few places available in orphanages that have been set up in neighboring Turkey.

The Syrian Orphans Keep Coming, But There's Not Enough Space

The Syrian Orphans Keep Coming, But There's Not Enough Space 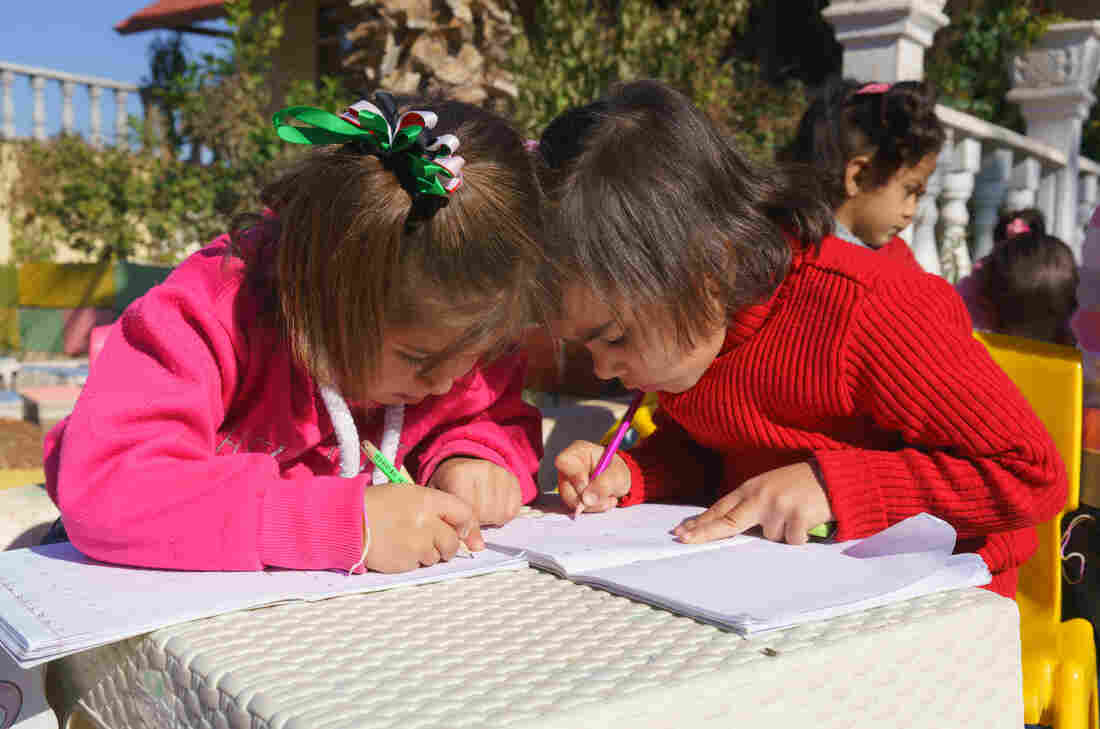 Two Syrian girls color at Bayti orphanage in Reyhanli, Turkey, just across the border from Syria. Many young Syrian refugees have lost one or both parents, but space is limited at orphanages in the city. Nish Nalbandian hide caption 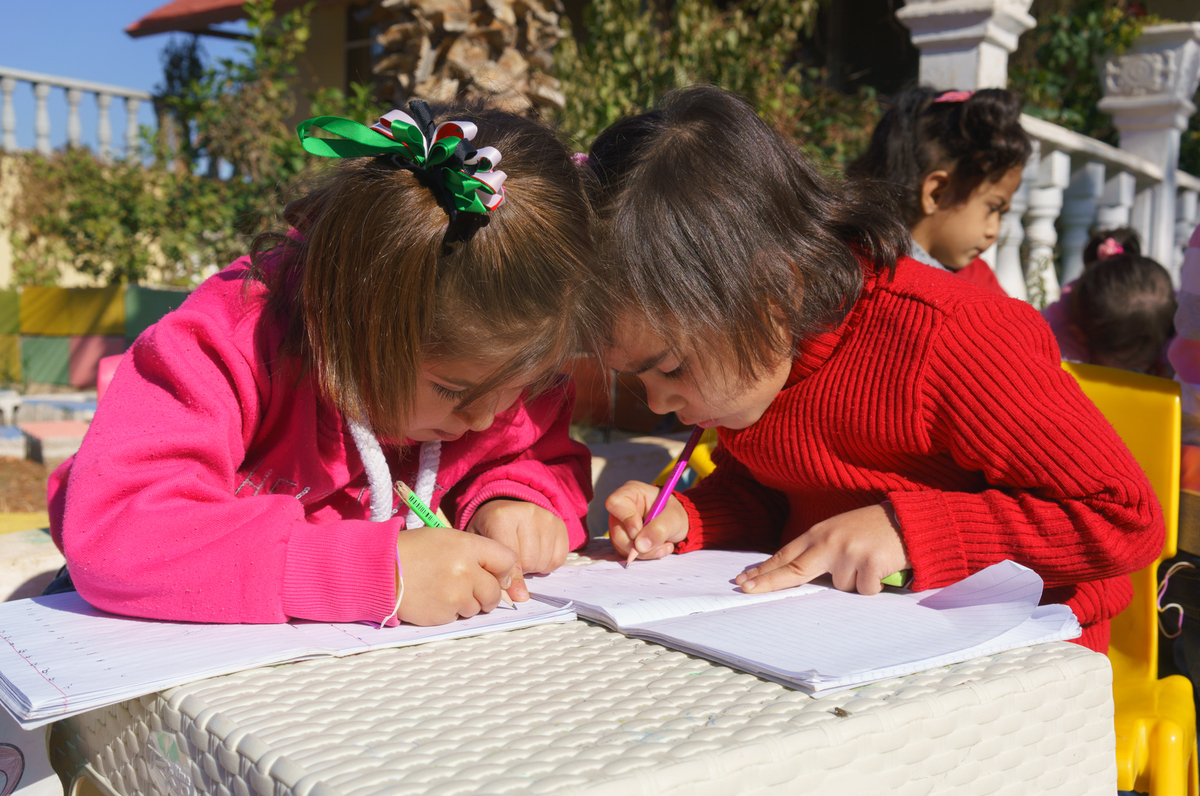 Two Syrian girls color at Bayti orphanage in Reyhanli, Turkey, just across the border from Syria. Many young Syrian refugees have lost one or both parents, but space is limited at orphanages in the city.

Five-year-old Batoul has large cheeks and saucer-sized eyes that dart from side to side while she and the other Syrian children perform songs in Arabic and English.

She's learning from caregivers while living in an orphanage known as Bayti ("home" in Arabic) in the Turkish border town of Reyhanli, where the Syrian refugee population has topped tens of thousands in the past few years.

The classrooms on the first floor are colorfully decorated and the dormitories upstairs are neat. From the upstairs window at Bayti, the children can see the nearby Atmeh Refugee Camp on the Syrian side of the border, where some of them were living before they came here. Both the orphanage and some projects in the refugee camp are funded by the Maram Foundation, a U.S.-based aid group founded by Syrian-Americans.

Currently there are about eight orphanages in Reyhanli, but that's not nearly enough, said one of the home's directors, Nihad Abdi.

"There are so many children that need our help. But we can't take anymore," said Abdi, herself a Syrian refugee.

In its fifth year, the fighting in Syria has made orphans out of legions of children.

Of the more than 4 million Syrians who have fled their homeland, more than half are age 17 or younger, according to the United Nations High Commissioner for Refugees.

Some were fortunate enough to be accompanied in flight by both parents. Many lost their fathers to the violence that has killed more than 250,000 Syrians since the fighting began in 2011. Still others are without any immediate family to look after them.

The children living at Bayti range from toddlers to young teens. All have lost their fathers and some have lost their mothers as well, said Abdi. Some of the mothers are still alive, but can't afford to keep their children at home as they try to find work in and around Reyhanli.

One child watches a video on YouTube of the death of his father over and over again just so he can continue to remember him, Abdi said.

Abdi said the children at Bayti were doing well, for the most part. But it hasn't been easy. Even here, where they are nurtured and cared for in relative safety from the fighting in Syria, they struggle with the horrors they witnessed. 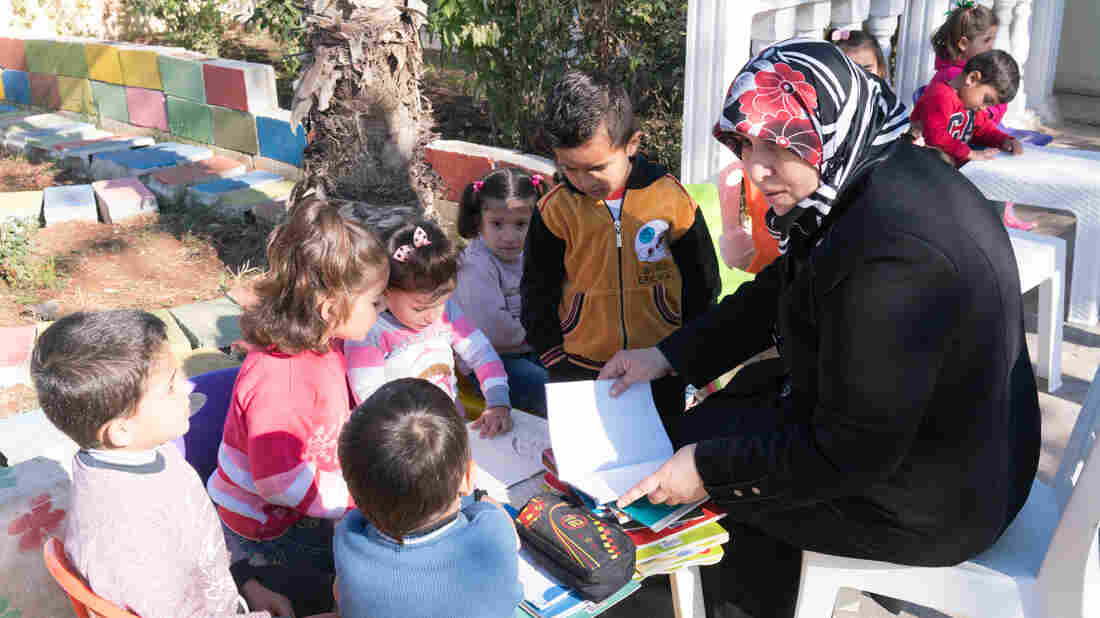 A teacher works with children at the Bayti Orphanage in Reyhanli. Nish Nalbandian hide caption 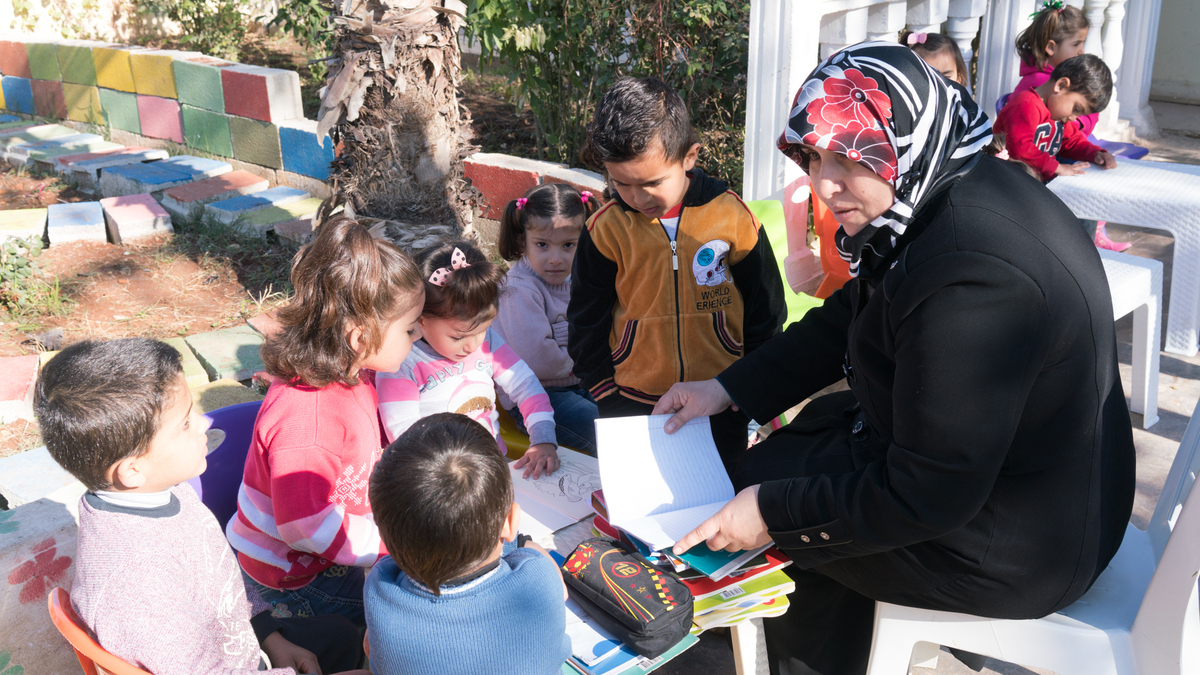 A teacher works with children at the Bayti Orphanage in Reyhanli.

As Aid Is Offered In Madaya, Other Regions In Syria Are Still Besieged

"It takes a lot of effort to adapt to a new life," she said. "They have endured hard times. Leaving Syria and moving to a new place has not been easy for them."

Those children who have a hard time coping receive counseling. Fellow Syrian refugee Beshr al-Haj Hussain, originally from Damascus, is a psychotherapist who works with children from Bayti and elsewhere in Reyhanli to help them develop coping skills.

Hussain said that one of the adverse results of war is all the downtime children have when schools are destroyed or shuttered. According to the humanitarian group World Vision, some 5,000 schools in Syria are closed, leaving an entire generation of young people uneducated and with little to do.

"During war, there is a lot of empty time and that could be a dangerous thing," said Hussain. "Any kind of routine helps children cope."

Post-traumatic stress among children usually manifests as aggression and other antisocial behavior, he said. Many learned such behavior growing up amid the violence in Syria, he said.

Treatment includes therapy sessions and signed agreements between caregivers and children that reward younger ones for meeting certain behavioral requirements.

This kind of therapy is most effective for children ages 6 to 13, Hussain said. Older children are much harder to treat because of the amount of trauma they've endured. The oldest children in Bayti are around 13.

A group home for teenagers is being planned. Right now, Bayti doesn't have enough room for the high school-age children who need help. Directors are uncertain what will happen to the older children who are still too young to care for themselves.

Some of those who age out of Bayti are moving on to lives even farther from the violence in Syria.

Ruba Shaleesh, 12, is among a handful of children from Bayti who were accepted at a boarding school in Italy. She leaves for her new school and life in Europe this spring.

The perpetually smiling Ruba says in well-spoken English that she will "miss her teachers and friends" at Bayti.

"At first it will be difficult," she said. "But later, I'm sure it will be good." 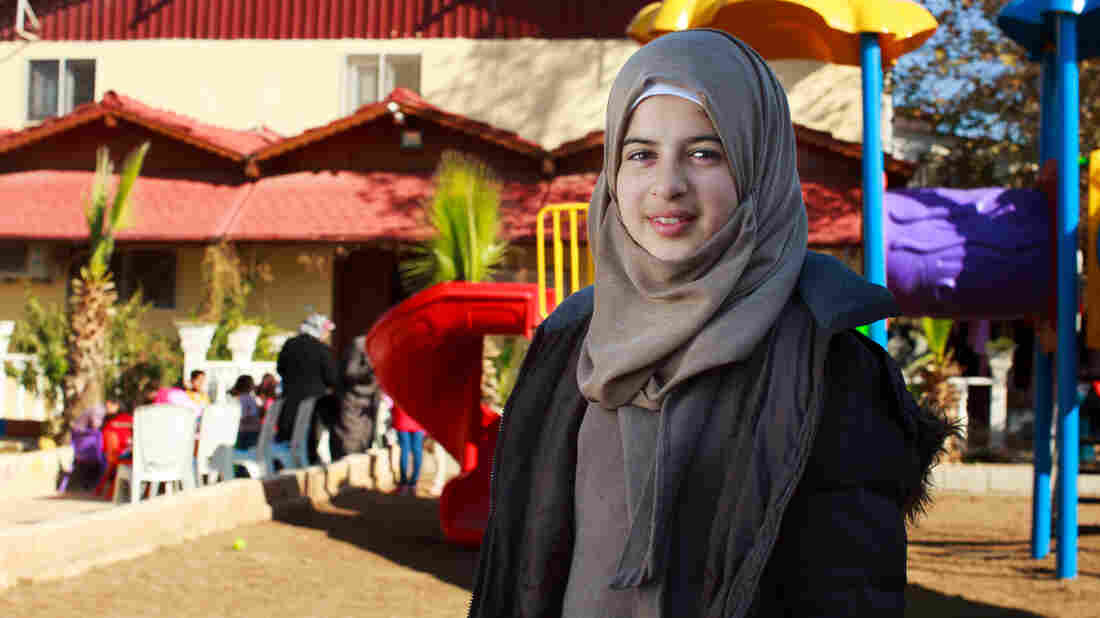 Ruba Shaleesh, 12, lives at the Bayti orphanage. She has been accepted to an Italian boarding school. Nish Nalbandian hide caption 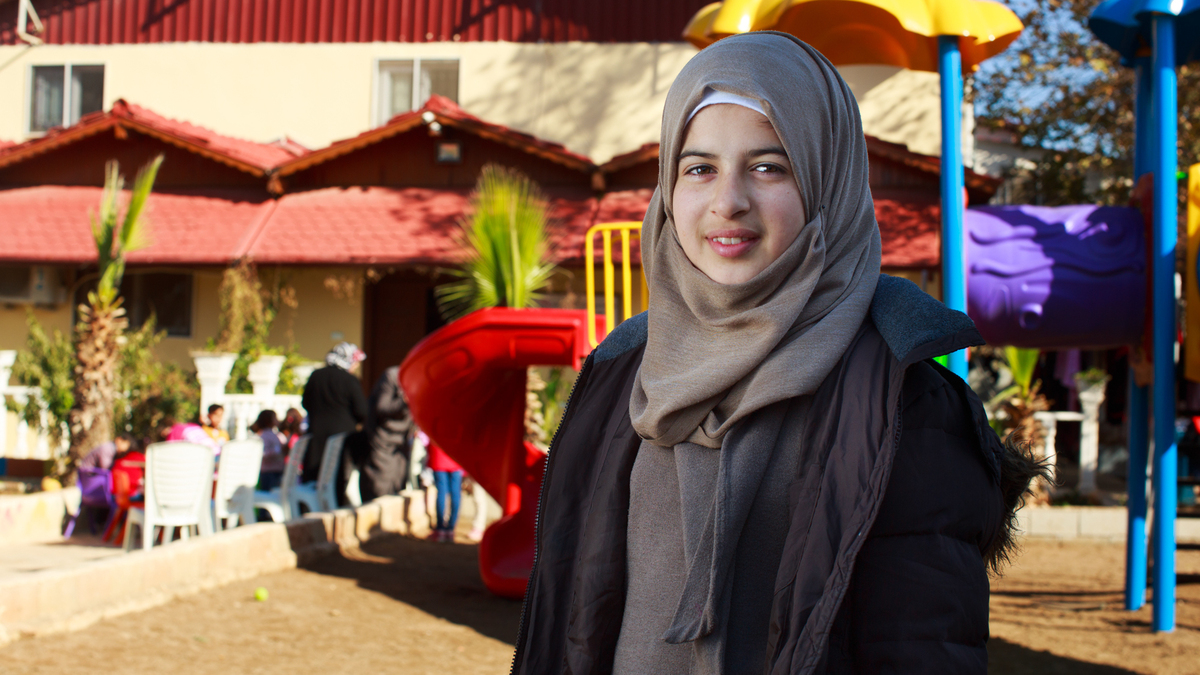 Ruba Shaleesh, 12, lives at the Bayti orphanage. She has been accepted to an Italian boarding school.