Accessibility links
A Holdout In Western Europe, Italy Prepares To Decide On Civil Unions : Parallels Italy's Senate takes up a measure this week that would permit civil unions, but the bill would not legalize same-sex marriage. All of Western Europe already permits one or both. 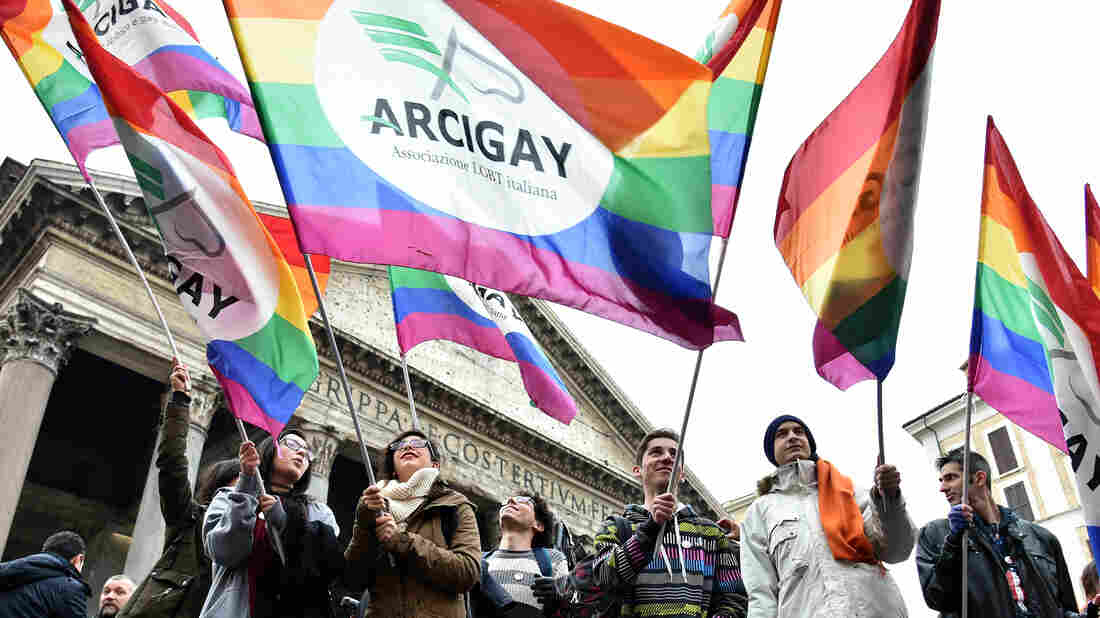 Supporters of same-sex civil union gathered last Saturday in central Rome. Italy is the only major Western European country that has not legalized same-sex marriage or civil unions. The Senate plans to take up the question of civil unions on Thursday. Alberto Pizzoli/AFP/Getty Images hide caption 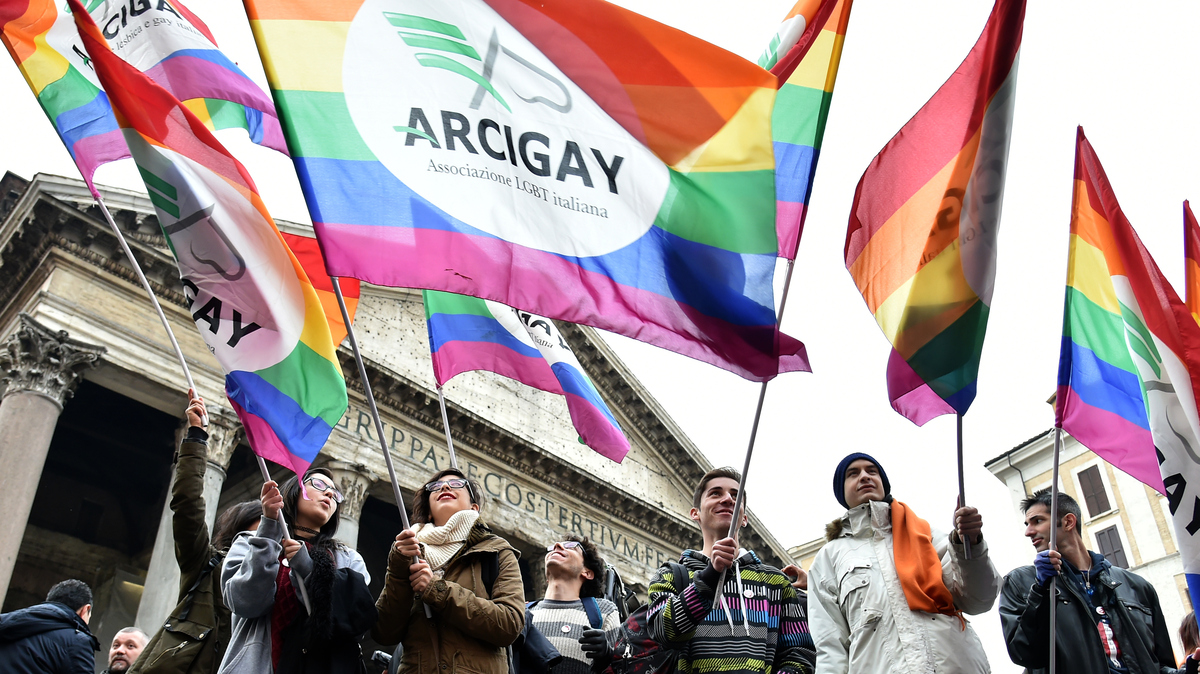 Supporters of same-sex civil union gathered last Saturday in central Rome. Italy is the only major Western European country that has not legalized same-sex marriage or civil unions. The Senate plans to take up the question of civil unions on Thursday.

Same-sex marriage or civil unions are legal throughout Western Europe, including many traditionally Catholic countries. The last holdout is Italy, where the Senate is about to take up a bill on Thursday that would legalize civil unions — though it would not authorize gay marriage.

Tens of thousands of Italians took to the streets last weekend in some 100 cities demanding legalization of civil unions, including those of gay and lesbian couples.

"Italy, it's time to wake up," they shouted.

The rallies were organized by LGBT activists and their supporters, who said they have grown impatient as they watched their European neighbors legalize same-sex marriage or civil unions.

Carlo Terriaca, whose son is gay, attended the Rome rally. After retiring from his job as a bank manager, Terriaca became president of an association of parents of LGBT children.

"I think in the last 10 years, Italian society has been deeply changing, particularly the new generation, you have quite a different feeling about this," he said.

One of those young people is Alessandro Piavani, 22, who sees the civil unions bill as a crucial human rights issue for the entire society.

"Because it's a sign of modernity and [a move] forward in the right direction to rights for all, not just for bisexual, homosexual people. But for all," he said.

Polls show large numbers of Italians approve granting homosexual couples inheritance and pension rights, as well as the right to make medical decisions for a partner who is hospitalized.

But there's much greater division over a provision in the bill that would allow the adoption of a gay partner's biological children.

Prime Minister Matteo Renzi is a strong supporter of the bill, but there's division within his own government.

"We say no to marriages by whatever name, and no to stepchild adoption," said Maurizio Sacconi, who belongs to a small party in the prime minister's coalition.

Opponents insist that stepchild adoption will encourage gay couples to go abroad and turn to surrogate mothers — a practice banned in Italy.

Cardinal Angelo Bagnasco, the president of the Italian Bishops Conference, which has traditionally made itself heard in Italian politics, waded into the debate this week, saying it's up to lay people to "inscribe divine law into earthly life."

"The welfare of children must prevail over everything," he said. "They are not a right. ... They have a right to security and stability."

But LGBT activists say that surrogacy has nothing to do with the civil unions bill.

"Our children are citizens who must be safeguarded. The way they came into this world is not important," said Marilena Grassadonia, president of the Rainbow Families Association. "I have duties toward my three children, whether I'm their biological mother or their other mother."

Ivan Scalfarotto, the undersecretary for relations with Parliament and first openly gay member in government, believes opposition to the bill is based on an unwillingness to accept the concept of equality.

"The underlying text is a gay or lesbian couple is worth less than a straight couple, they are not equal," he said.

Opponents of the bill are staging a "family day" rally Saturday at Rome's ancient Circus Maximus, the biggest arena in the city.