Accessibility links
As Noose Tightens Around ISIS In Iraq, Civilians Flee Hunger And Cold : Parallels Conditions are worsening in one ISIS-controlled area of Iraq. In pursuit of safety and stability, thousands of civilians are walking for days over the Hamrin Mountains, often without water or sleep. 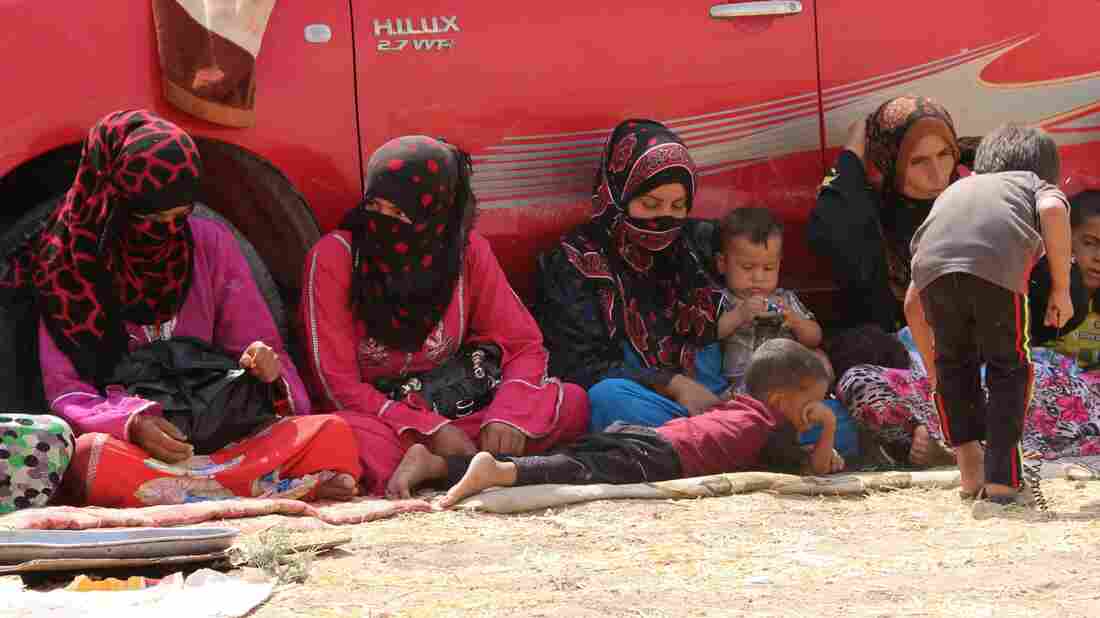 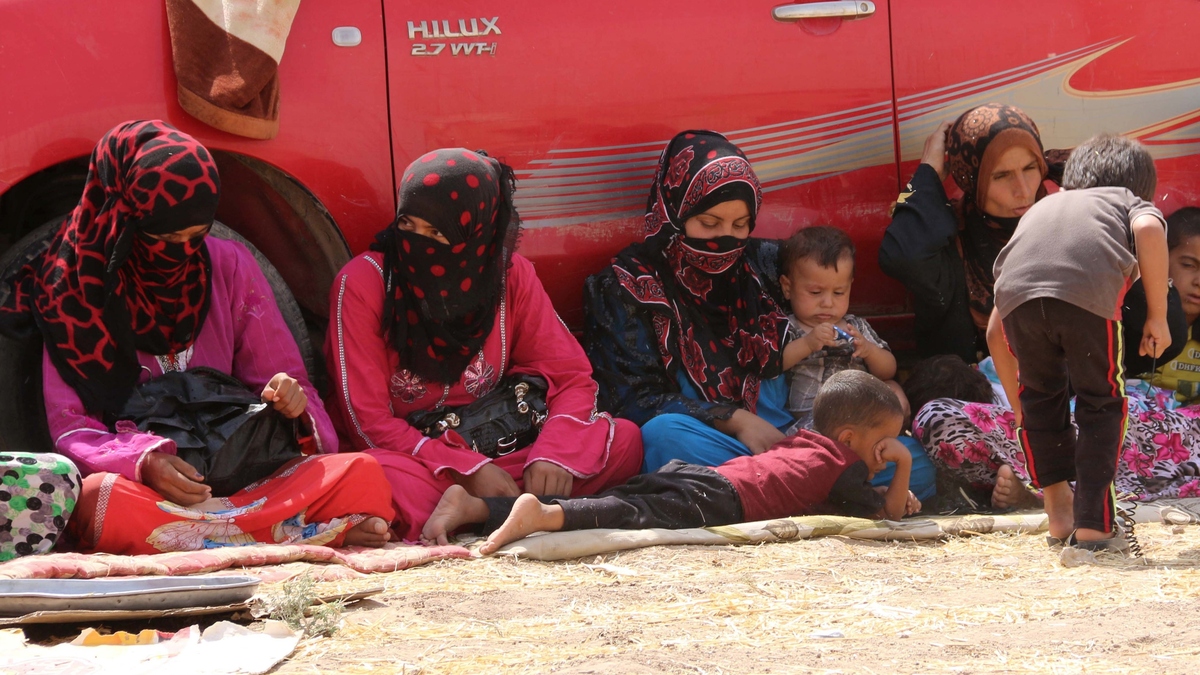 Iraqi families displaced from the areas of Hawija and Hamrin in northern Iraq traveled to Kirkuk governorate in search of safety on Aug. 31. Thousands continue to flee ISIS-held areas.

On a little patch of grass outside a police station in the small town of Rubayda in northern Iraq, a half-dozen women with small children sit on a rug, with a haggard-looking group of men nearby, eager to talk about how they walked here.

"Day and night, for 48 hours, without food or water or sleep," says Khalaf Hussein Karam, a former soldier with a deeply lined face. He escaped from his town in the Islamic State-held area around the city of Hawija. With numerous relatives including women and children, he crossed the Hamrin mountain range.

"At the last stage, we had to cross the frontlines between the Iraqi army and ISIS brigades," he says.

At one point, the group got lost and tried to go back home — but when ISIS saw them approaching they shot and killed some of them. So the survivors had no choice but to find their way to the government-held area.

"We slept in the open, in the cold," he says, saying five days on, his body was still aching. But finally, the exhausted walkers reached the Iraqi security forces. "They received us with open arms," says Khalaf. "They treated us in a good way."

That might seem like an extraordinary journey. But officials and police say about 20,000 people have walked over those mountains to escape ISIS in the last few months.

The U.S.-led coalition against ISIS has tightened the noose around the extremists in the last few months. Supply lines and revenue sources have been cut off. The U.S. military says all this is weakening the group militarily. But it's also affecting civilians in the areas ISIS controls.

Captain Dhiaa Abdullah Mohammad is the commander of what he calls the mountain unit of the police. He says families make the perilous journey on a daily basis.

"They come because of hunger, because they have no money and a lot of pressure from ISIS," he says.

The escaped families say they hated the brutal rule of ISIS. They speak of beatings for women who weren't totally covered, or men caught smoking. The militants were extra suspicious of anyone who had been in the security forces.

They also talk of growing hardship in the area controlled by the extremists.

"We were dying," says Wijdan Taha Hussein, clustered on the rug with other women and wide-eyed children, including two of her own.

"There were shortages of water, electricity, fuel," she says. Food was scarce and expensive.

Islamic State tries to block information from getting out of its areas. Aid agencies aren't sure exactly how civilians are faring in regions under the group's control. But there is growing anecdotal suggestion that shortages of the basics of life there are becoming chronic.

Seven months ago, Iraq's government decided to stop paying salaries to the government workers in ISIS areas. Those salaries had been taxed by ISIS, and Iraqi officials say they didn't want to give the extremists the cash. But that's likely left hundreds of thousands of families without an income.

Plus, the U.S.-led coalition has cut off roads that are crucial supply routes, particularly a road between the ISIS Syrian stronghold of Raqqa and the Iraqi city of Mosul. In Baghdad, U.S. Captain Chance McCraw acknowledges it's been tough on civilians, but it's taking a toll on ISIS, which he calls by their Arabic nickname Daesh.

"We know life is not good underneath Daesh by any means," he says, adding that life's not as prosperous as it is in areas under government control. McCraw says there are shortages of fuel and electricity. He also points to a number of battles ISIS has lost recently, in which the group has been short on heavy weapons and vehicles.

McCraw also says ISIS is losing so many fighters in fighting that they can't spare so many men to stop civilians from escaping.

And that could mean even more families like the ones fleeing, night by freezing night, over the Hamrin mountains.