Accessibility links
A New Generation Of Saudi Artists Pushes The Boundaries : Parallels Daring visual artists, whose edgy work challenges religious and political taboos, have become a critical voice in the conservative kingdom — where open calls for reform are a criminal offense. 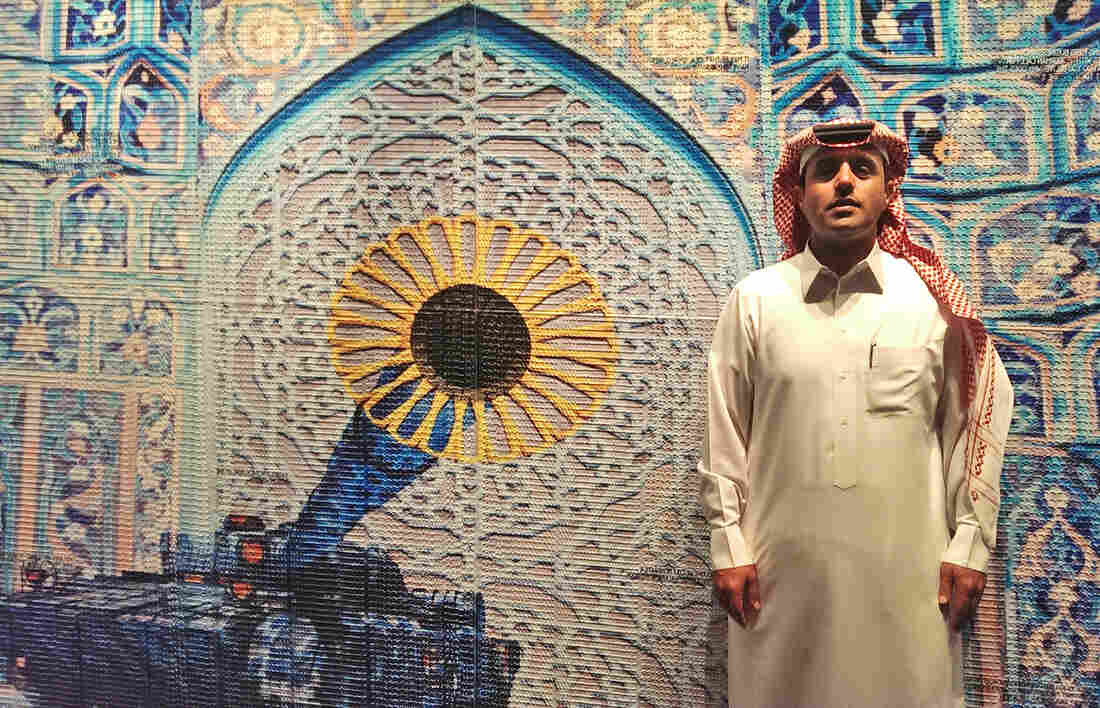 Saudi artist Abdulnasser Gharem poses in front of "Generation Kill," a piece made with rubber stamps, digital print and paint, at the opening night of his exhibition titled Al Sahwa (The Awakening) at Ayyam gallery in Dubai in 2014. Aya Batrawy/AP hide caption 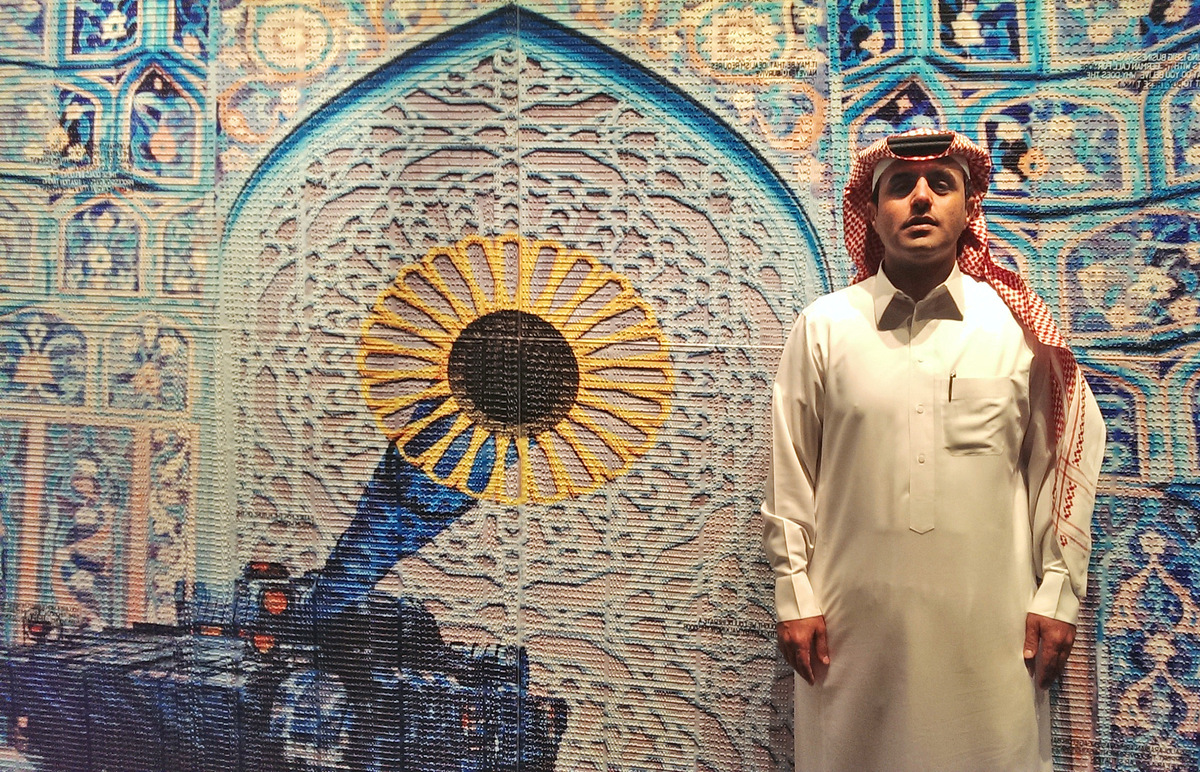 Saudi artist Abdulnasser Gharem poses in front of "Generation Kill," a piece made with rubber stamps, digital print and paint, at the opening night of his exhibition titled Al Sahwa (The Awakening) at Ayyam gallery in Dubai in 2014.

Abdulnasser Gharem doesn't have the background you might expect for a successful artist – let alone one famous for edgy work from Saudi Arabia. He was once a lieutenant colonel in the Saudi army. He went to high school with two of the 9/11 hijackers.

But his first major art work sold for a whopping $842,500 at a Christie's auction in Dubai. It's a glittering dome symbolizing the Dome of the Rock, set on its edge, capturing a dove.

In Saudi Arabia, a new generation of artists is pushing boundaries amid a growing art scene. Art galleries and daring visual artists, all unheard of just a few years ago, are thriving. Contemporary artists like Gharem have become a critical voice in the conservative kingdom, where open calls for reform are a criminal offense.

Gharem says he doesn't care about fame. "I must focus on my own mission," he says with an exasperated laugh at the suggestion that he is the highest selling artist in the region. "I want to play my own role in the society, which will make me happy, and I can see the result."

In his busy Riyadh workshop, musicians play traditional music in the kitchen; a photographer is arranging images on a white wall in the next room. Here, Gharem, 41, gives young artists the help and guidance he never got.

"When I was struggling as a kid, I want[ed] to see the museum, I want to see the real paintings, I want to talk to the artists, how they are thinking," he says.

The Internet opened him to the larger art world as a young artist. He started an art foundation in 2013 with the money he earned from his first sale. Gharem took more than a dozen young artists to London last year to display their work, and this year, he and a group of young Saudi artists will launch an art tour across the U.S.

There is plenty of talent in Saudi Arabia, he says. "But the problem is they don't know how to deal with it. They don't have a strategy, they don't have even the guidance, what to do? So, that's my mission, you know."

He aims to show Saudis how to see and how to think critically. He knows the dangers of extremism firsthand because of his high school classmates turned terrorists. He insists art is an answer, a way to pose sensitive questions about ideology and religion. 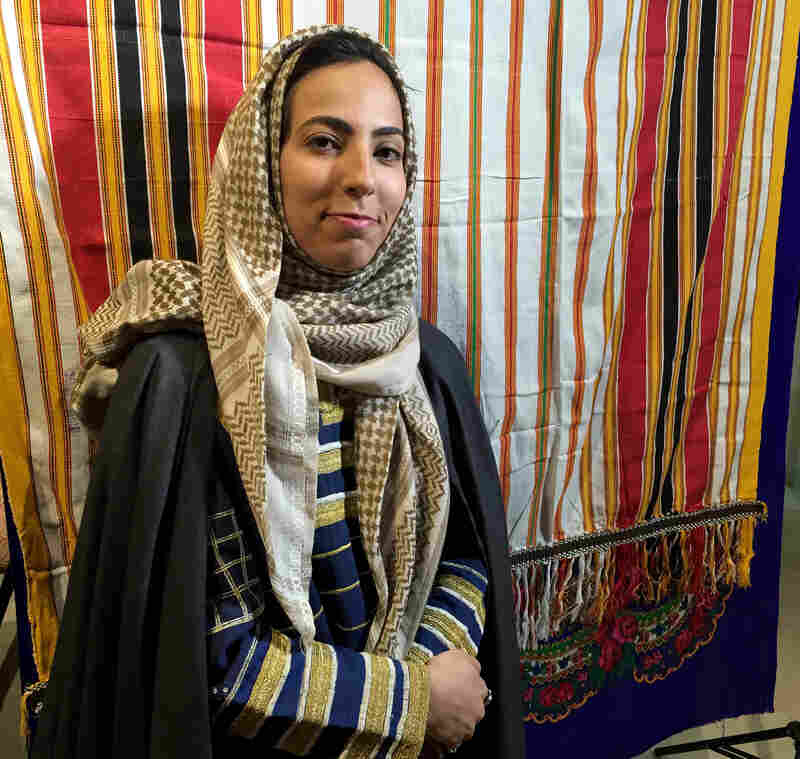 In a free space, an artistic space, he says, "You will see how they became different."

The art produced here is different. It's a daring visual critique of Saudi culture.

Performance videos play on a TV at the workshop. One is a satire of Saudi Arabia's ultra-religious culture, in which sketching human figures is forbidden: A group of solemn Saudi men sketch a plastic mannequin, a nude female. This act is so taboo in Saudi Arabia that the mannequin had to be shipped from Dubai and cut up into numbered pieces to get past Saudi customs officials.

The one woman at the workshop is Njoud Alanbari. Her art focuses on problems in female education. The government-approved posters found in public schools, which are mostly in pink, inspire her work. But the messages are harsh. "The colors are so twisted," she says. The posters list "proper" behavior and include a long list of no's.

"No music, no pornography, don't travel," Alanbari says, and raises an eyebrow. "Actually, as a kid, I didn't know what pornography is." The posters are in every public school. "It's so intense," she says. "It's everywhere."

A drawing of a sword underlines every "no." Alanbari plays with these official images — in one instance, replacing a female silhouette with a monkey's head, forcing a viewer to take a fresh look.

"You need someone to come and tell you, 'Look at this,'" she says. "Because people are so used to it, it's now common."

Another performance video called "Traditional Pain Treatment" shows a fellow artist with a map of the Middle East inked across his back enduring traditional bloodletting via cupping, with glass cups that are heated and placed on his skin. "So we said, we need to take the bad blood from all the countries – the bad ideology, the bad politics, the bad economics. Everywhere."

Conceptual art is new in Saudi Arabia — a visual language that is easily understood by a young generation steeped in Internet culture, but flies just as easily past Saudi censors. Gharem and his band of young artists push the boundaries of critical speech now, not with words but with images.

"Visually, you can say it, because no one can accuse you with an image," says Gharem. "But if you are going to write or text or say something, it's easy to accuse you." With a picture, he says, "If you don't like it, you can put it down."