Accessibility links
In Rio, The Samba Parade Goes On Despite A Wardrobe Malfunction : Parallels NPR's Lourdes Garcia-Navarro donned an elaborate, colorful costume to samba her way through Rio's Carnival parade competition — and recovered quickly after forgetting to tie a crucial double knot.

Moses riding a giant eagle. Rats running out of a bank vault. And those were just the floats. It's Carnival in Brazil, and for Rio de Janeiro's huge Samba Parade, the city's 12 main samba schools pulled out all the stops on Monday — including having a man parachute into the Sambadrome mid-parade.

Add to that thousands of dancers and drummers dressed in elaborate costumes that sparkle and glow, all cheered on by tens of thousands of spectators, plus a national TV audience — and you have an incredibly watchable spectacle.

It's even more amazing to be able to participate.

Except if your pants fall down in mid-samba.

More about that in a minute.

I joined Vila Isabel Samba School this year. It's one of the most venerable schools in Rio. Every year, 12 top-tier samba schools compete for two days during Carnival to be crowned the winner. It's a huge deal. Vila Isabel won in 2013, but in the past two years, it finished at the bottom after underwhelming parades. So a lot was riding on Monday's performance.

To understand how much, you have to visit the communities where these schools are based. Most are in poor areas, and the schools actually provide not only a fun way to participate in the yearly celebration, but also money and jobs. Vila Isabel's parade theme this year was an ode to Brazil's northern state of Pernambuco, one of the hardest hit by the Zika virus, so it had an extra poignancy.

It costs millions to put on an award-winning show. There are half-a-dozen floats, plus the costumes for thousands of dancers and drummers. Everything is made in massive warehouses that employ tailors, designers, sculptors and artists, among many others.

Brazil's economic crisis hasn't helped. Vila Isabel's director told Bloomberg News that private sponsorship has dried up. That has left the bigger schools even more financially beholden to murkier financing; many samba schools are reputedly supported by bicheros or gambling kingpins. My costume was ready only hours before the parade — thanks to what I was told was a last-minute infusion of cash from a private benefactor.

The schools also give their communities a sense of much-needed pride. Young girls start training really young to participate in the parades.

I met 18-year-old Maraia Zanzoni at one of the rehearsals, which take place on the streets of the neighborhood as members of the community watch and wear jerseys with the school's colors.

She had been going to dance school twice a week since she was 4 years old so she could finally become a passista — one of the main dancers wearing the famous, tiny samba costumes.

"Samba is my life and my passion," she told me. "And my whole family is involved in the samba school — parents, aunts, uncles. And if I have kids, they will become part of Vila Isabel because it's part of our tradition."

Drummer Mateus Ventura was in the batteria — the huge drum section that gives the parade its beat.

"The parade raises the self-esteem of the whole neighborhood, and it shows people that we are able to mount big events that the world watches," he told me.

These people are the heart and soul of the samba parades. I was just an interloper — but a committed one.

When the big day arrived, my husband and I, with friends from London, donned our costumes. I was wearing a huge globe on my head and a map of what was supposed to be the geography of northern Brazil on a kind of large breastplate.

My friend Tommy Evans — wearing a massive yellow feathered headdress and gold lamé pants — quipped that he looked "like Big Bird going to Studio 54." His girlfriend, Justine Redman, said she felt like "an Inca goddess made in China."

Basically, the costumes were amazing. 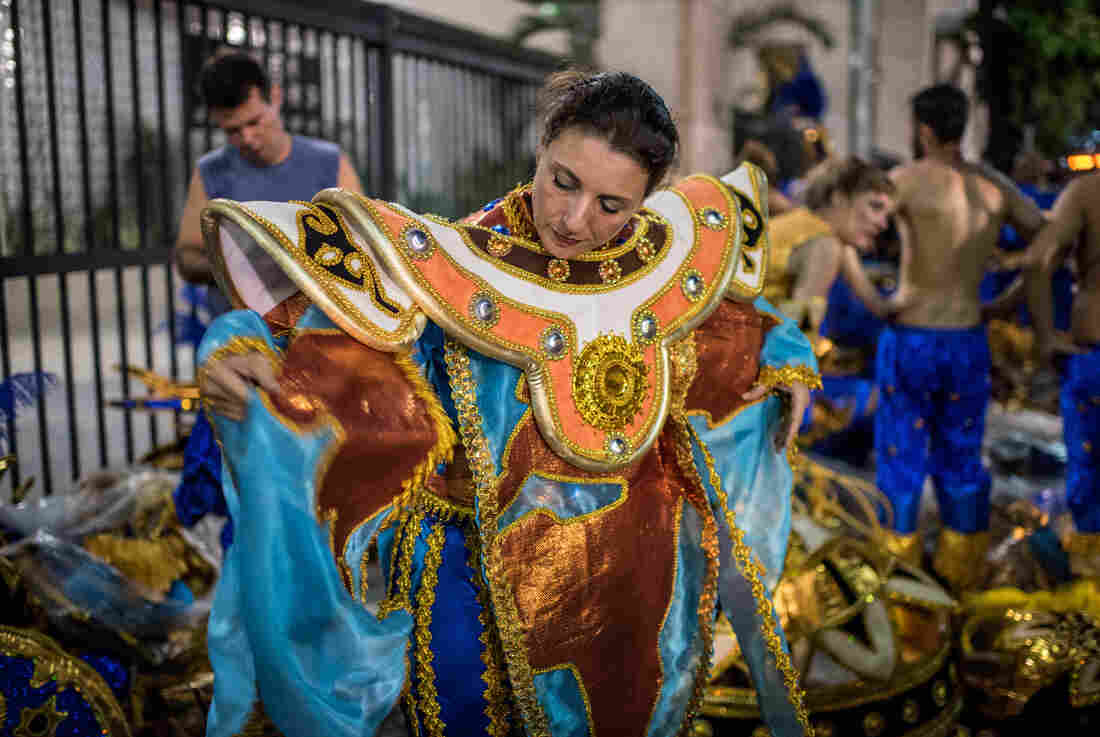 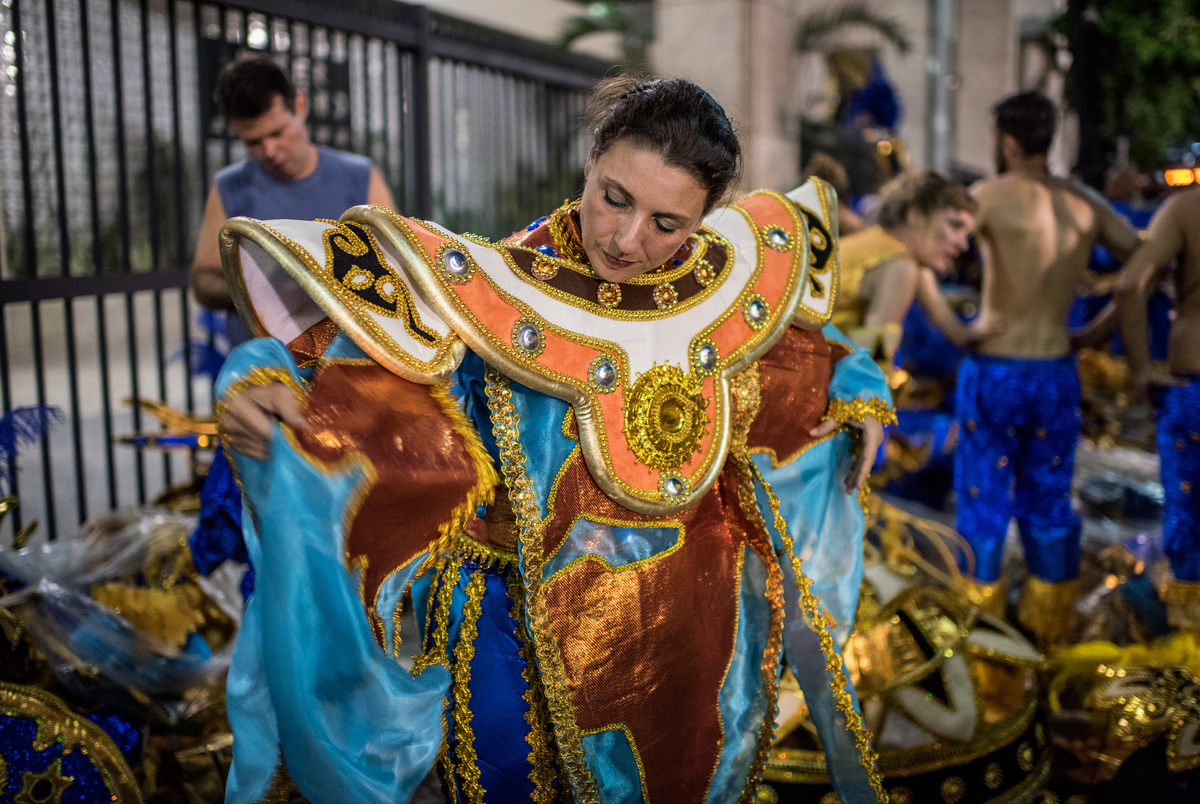 Lourdes Garcia-Navarro prepares for her debut with the Vila Isabel Samba School during Carnival in Rio de Janeiro.

That said, these outfits are really elaborate and difficult to put on. I was so focused on the glittery bits that I didn't think about the fundamentals.

The moment finally came to enter the Sambadrome, and it is overwhelming — so many lights and people singing and cheering, judges and cameras focusing on your every move, and the need to keep moving at all costs. I was giving it my best shot, when I noticed I was having trouble moving my legs and there was an unnatural breeze on my backside.

I bent over so suddenly that my husband thought I was having bowel issues.

My pants had fallen to my knees.

In my rush to get all the other parts of my costume ready, I had neglected to double-knot possibly the most basic part of my outfit. Luckily, I fixed it fast and I spent the next 80 minutes dancing and singing.

For the record, I acknowledge I am a terrible samba dancer. But I loved it. Vila Isabel won't know how it did until the official results on Wednesday, though local press coverage gave us favorable reviews. The competition was stiff, with samba school Portela, especially, putting on a dazzling display.

This is the third Carnival I've covered in Brazil, but the first where I've really understood what the celebration is all about.

There is something magical about dancing and singing simply for the pure joy of the moment, letting go of your inhibitions and letting the craziness of Carnival take you away.